Last Saturday, The Times announced that British actress Adrienne Corri has passed away on 13 March 2016. Corri is best known as Lara's mother in David Lean's Dr. Zhivago (1965) and as the rape victim Mrs. Alexander in Stanley Kubrick’s A Clockwork Orange (1971). The strikingly attractive, red-headed actress also starred in several horror and science-fiction films. 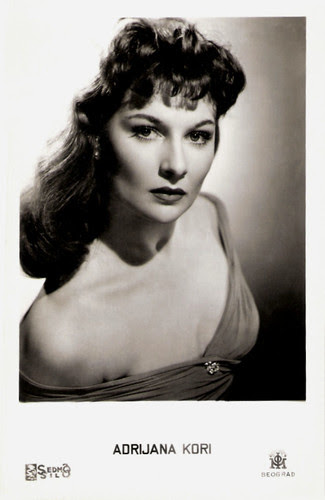 
Adrienne Corri was born as Adrienne Riccoboni in Edinburgh, Scotland, in 1931 (according to Wikipedia; IMDb gives 1930). Her parents were Italian. She attended the Royal Academy of the Dramatic Arts (RADA) in London and then appeared on both the English and American stage. While still a teenager, she made her film debut in the comedy The Romantic Age (Edmond T. Gréville, 1949) starring a young Mai Zetterling.

Next she played Valerie, one of the three adolescent girls living in Bengal near the Ganges in The River (Jean Renoir, 1950), filmed on location in India. It was Renoir 's first colour film, and showed off Corri’s beautiful flaming red hair which would become her trademark. Martin Scorsese later called The River "one of the two most beautiful color films ever made".

For Corri it was the start of a successful film career. She appeared in many horror and suspense films, including The Kidnappers (Philip Leacock, 1953), Devil Girl from Mars (David McDonald, 1954) and Corridors of Blood (Robert Day, 1958) starring Boris Karloff.

During the 1950s she also often appeared on television, in such family series as The Three Musketeers (1954) as Milady de Winter, The Count of Monte Cristo (1956) and Sword of Freedom (1957) starring Edmund Purdom. In the early 1960s, Corri featured in several horror and action films, including The Hellfire Club (Robert S. Baker, Monty Berman, 1961) with Keith Michell and Peter Cushing, and A Study in Terror (James Hill, 1965).

In 1965 she also played supporting parts in the interesting thriller Bunny Lake Is Missing (Otto Preminger, 1965) with Carol Lynley and Laurence Olivier, and in the classic blockbuster Dr. Zhivago (1965, David Lean) as the mother of Lara (Julie Christie). It lead to more film roles, such as in the science fiction film Moon Zero Two (Roy Ward Baker, 1969), but she was mainly seen in numerous TV series. On stage and TV she appeared in Shakespeare’s Twelfth Night (John Sichel, 1969), as the Countess Olivia opposite Alec Guinness as Malvolio. 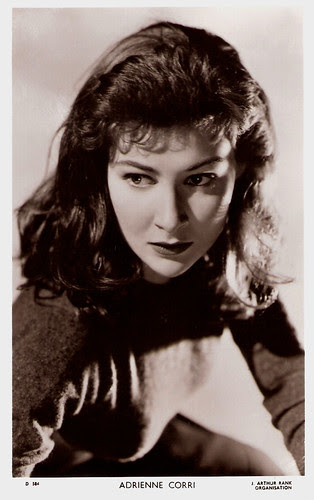 
One of Adrienne Corri’s most spectacular film performances was in A Clockwork Orange (Stanley Kubrick, 1971). She played Mrs. Alexander, the victim of the bizarre gang-rape by ultraviolent punk Alex DeLarge and his three droogs. Alex (Malcolm McDowell) ritually rapes her while dancing to the tune of Singing in the Rain. The scene required for her to be completely nude, and Kubrick’s continuous calls for more takes reportedly made her raging at the director.

She seemed better at ease in the stylish Hammer horror film Vampire Circus (Robert Young, 1972) in which she starred as the Gypsy Queen opposite John Moulder-Brown. During the 1970s Corri also appeared in the cinema in the thriller Rosebud (Otto Preminger, 1975) with Peter O’Toole, and as Therese Douvier in Revenge of the Pink Panther (Blake Edwards, 1978) starring Peter Sellers as Inspector Clouseau.

Corri continued to mix film and TV. Her final film appearance was in the Graham Greene adaptation The Human Factor (Otto Preminger, 1979) starring Richard Attenborough and Joop Doderer. Her later television credits include Mena in the Doctor Who story The Leisure Hive (1980) and Lady Rebecca in Lovejoy (1992).

Meanwhile, she had a major stage career. In the theatre, she specialised in fiery, flamboyant characters. The Guardian critic Michael Billington recalled on his blog a famous incident: “Adrienne Corri, on the disastrous first night of John Osborne's The World of Paul Slickey, responding to the avalanche of curtain-call booing by raising two fingers to the audience and shouting ‘Go, f**k yourselves’.”

She became a well-known expert on eighteenth-century portrait painting and published in 1985 a book about the painter Thomas Gainsborough. Adrienne Corri married and divorced the actor Daniel Massey (1961–1967). Before her marriage to Massey she had two illegitimate children. Adrienne Corri was 84.