Imported from the USA: Rita Hayworth

Sultry Rita Hayworth (1918-1987) was an American dancer and actress was one of the top pin-up girl for GIs during World War II. Her beauty catapulted her to international stardom and she is best known for her sexy performance in the Film Noir Gilda (1946). Later in her career she also appeared in European films. 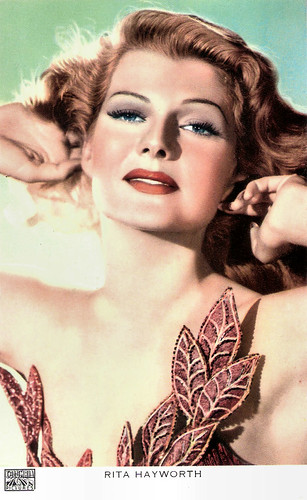 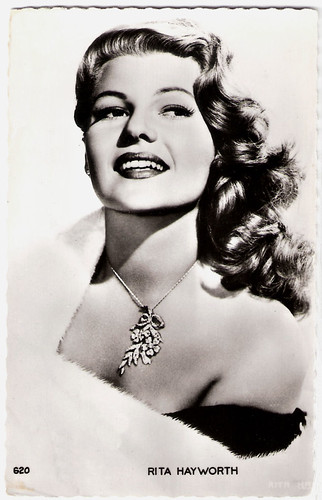 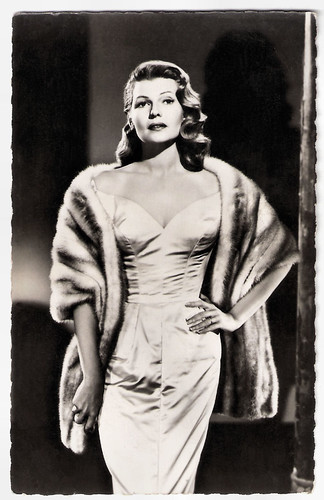 Put the Blame on Mame


Rita Hayworth was born in Brooklyn, New York in 1918 as Margarita Carmen Cansino. She was the oldest child of two dancers, Eduardo Cansino, Sr., from Castilleja de la Cuesta, a little town near Seville, Spain, and Volga Hayworth, an American of Irish-English descent who had performed with the Ziegfeld Follies. Margarita had two brothers, Eduardo Cansino, Jr. and Vernon Cansino. Margarita's father wanted her to become a professional dancer, while her mother hoped she would become an actress.

She performed publicly from the age of six. In 1926 at the age of eight, she was featured with the dancing Cansino family in the Vitaphone short La Fiesta (1926). In 1927, her father took the family to Hollywood. He believed that dancing could be featured in the movies and that his family could be part of it. He established his own dance studio, where he taught such stars as James Cagney and Jean Harlow. In 1931 Eduardo Cansino partnered with his 12-year-old but mature-looking daughter to form an act called the Dancing Cansinos.

Margarita took a bit part in the Mexican film Cruz Diablo (Fernando de Fuentes, 1934) at age 16, which led to another in the Hollywood production In Caliente (Lloyd Bacon, 1935) with the Mexican actress, Dolores del Río. She danced with her father in such nightspots as the Foreign and the Caliente clubs. Winfield Sheehan, the head of the Fox Film Corporation, saw her dancing at the Caliente Club and quickly arranged for Hayworth to do a screen test a week later. Impressed by her screen persona, Sheehan signed her for a short-term six-month contract at Fox, under the name Rita Cansino, the first of two name changes for her film career.

During her time at Fox, Rita appeared in unremarkable roles, often cast as the exotic foreigner. She had her first speaking role as an Argentinian girl in the romantic Western Under the Pampas Moon (James Tinling, 1935). By the end of her six-month contract, Fox had merged into 20th Century Fox, with Darryl F. Zanuck serving as the executive producer. Zanuck did not renew Hayworth's contract. Feeling that Hayworth had screen potential, salesman and promoter Edward C. Judson, who became her first husband in 1937, got her freelance work in several small-studio films and a part in the Columbia Pictures feature Meet Nero Wolfe (Herbert J. Biberman, 1936).

Columbia Studio head Harry Cohn signed her to a seven-year contract and tried her out in small roles. Cohn argued that Hayworth's image was too Mediterranean, which reduced her opportunities to being cast in 'exotic' roles that were fewer in number. Rita Cansino became Rita Hayworth when she adopted her mother's maiden name, to the consternation of her father. At the urging of husband Eddie Judson, she changed her hair colour to dark red and had electrolysis to raise her hairline and broaden the appearance of her forehead. In 1939, Cohn pressured director Howard Hawks to use Hayworth for a small but important role as a man-trap in the aviation drama Only Angels Have Wings (1939), opposite Cary Grant. With this film's box-office success, fan mail for Hayworth began pouring into Columbia's publicity department. Cohn began to see Hayworth as his first and official new star.

While on loan to Warner Bros., Hayworth appeared as the second female lead in The Strawberry Blonde (Raoul Walsh, 1941), opposite James Cagney. Because the film was a big box-office success, Hayworth's popularity rose and she immediately became one of Hollywood's hottest actresses. A Bob Landry photo of Rita in Life magazine, 11 August 1941, made her the number 2 soldier pin-up of World War II. That same year the 'American film goddess' shared the dance floor with Fred Astaire in You'll Never Get Rich (Sidney Lanfield, 1941). This musical was so successful, the studio produced and released another Astaire-Hayworth picture the following year, You Were Never Lovelier (William A. Seiter, 1942).

Under of the influence of second husband Orson Welles, Rita began to read classic literature. While pregnant in 1944, she was impressed by Sir Walter Scott's Ivanhoe and named her firstborn daughter Rebecca after the novel's heroine. That year, Hayworth had top billing in one of her best-known films, the Technicolor musical Cover Girl (Charles Vidor, 1944) with Gene Kelly. Cohn continued to showcase Hayworth's dance talents and featured her in the Technicolor films Tonight and Every Night (Victor Saville, 1945), and Down to Earth (Alexander Hall, 1947) with Larry Parks.

Rita Hayworth is best known for her dramatic performance opposite Glenn Ford in the Film Noir Gilda (Charles Vidor, 1946). The film included a controversial (tame by today's standards) striptease by Hayworth. Singing Put The Blame On Mame, she wore black satin and performed a one-glove striptease. It made her into a cultural icon as a femme fatale. The following year she starred in another Film Noir favorite, The Lady From Shanghai (1947), which was directed by her then-husband, Orson Welles. Hayworth's performance was critically acclaimed. The film's failure at the box office was attributed in part to Hayworth's famous red hair being cut short and bleached platinum blonde for the role. Cohn had not been consulted and was furious that Hayworth's image was changed. 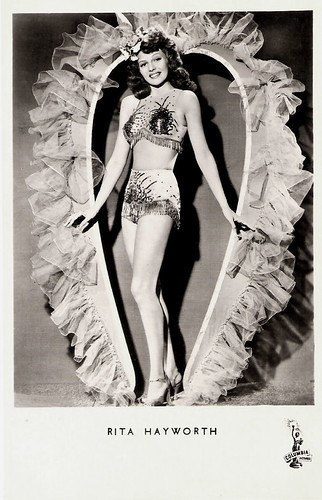 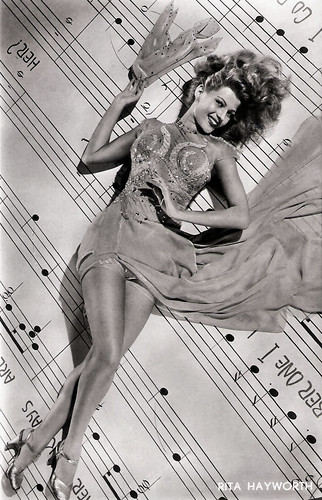 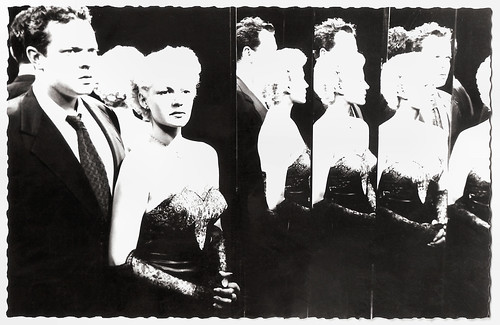 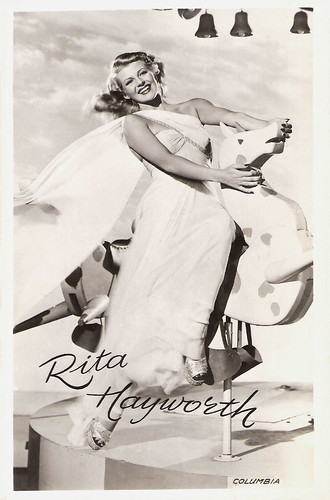 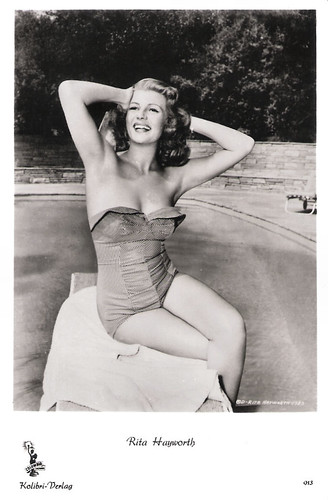 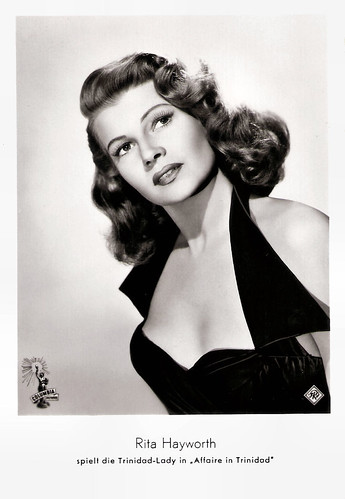 
In 1948, at the height of her fame, Rita Hayworth travelled to Cannes and was introduced to Prince Aly Khan. They began a year-long courtship, and were married in 1949. Hayworth left Hollywood and sailed for France, breaking her contract with Columbia. Hayworth gave birth to the couple's only daughter, Princess Yasmin Aga Khan. However, the marriage did not work out. In 1951, Hayworth set sail with her two daughters for New York. Although the couple did reconcile for a short time, they officially divorced by 1953.

Hayworth was forced to return to Hollywood to star in her 'comeback' picture, Affair in Trinidad (Vincent Sherman, 1952) which again paired her with Glenn Ford. Next, she starred in the Biblical epic Salome (William Dieterle, 1953) with Charles Laughton and Stewart Granger, the 3D musical Miss Sadie Thompson (Curtis Bernhardt, 1953), and the British-American adventure drama Fire Down Below (Robert Parrish, 1957). In between these films, she was off the big screen for another four years, mainly because of a tumultuous marriage to the singer Dick Haymes. After the musical Pal Joey (George Sidney, 1957) with Frank Sinatra and Kim Novak, Hayworth left Columbia for good.

Rita Hayworth received good reviews for her performance in Separate Tables (Delbert Mann, 1958), with Burt Lancaster and David Niven. The film was nominated for seven Oscars including Best Picture. Hayworth was married to co-producer James Hill at the time. Another critical success was The Story on Page One (Clifford Odets, 1960) with Anthony Franciosa. She continued working throughout the 1960s. For her part in Circus World (Henry Hathaway, 1964) she earned a Golden Globe nomination.

She also appeared in some European films. In Italy, she made the war-drama L'avventuriero/The Rover (Terence Young, 1967), based on the novel by Joseph Conrad and co-starring Anthony Quinn and Rosanna Schiaffino. In France, she appeared in the psychological thriller La route de Salina/Road to Salina (Georges Lautner, 1970), starring Robert Walker, Jr. and Mimsy Farmer. Her career ended with Ralph Nelson's offbeat Western The Wrath of God (1972), starring Robert Mitchum.

In 1980, Rita Hayworth was diagnosed with Alzheimer's disease, which contributed to her death at age 68. The public disclosure and discussion of her illness drew international attention to Alzheimer's, then a little-known disease, and helped to greatly increase public and private funding for Alzheimer's research. 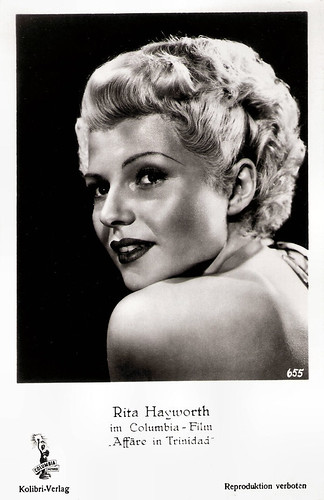 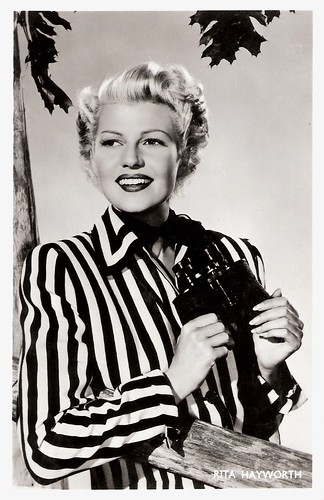 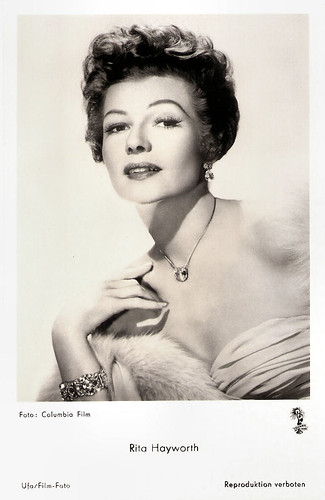 I didn't know that Hayworth suffered from Alzheimers. "Road to Salina" looks like a wild flic. Great post.

I've just downloaded iStripper, so I can have the sexiest virtual strippers on my desktop.