Last Tuesday, glamorous American film and television actress Rita Gam passed away. After a promising debut in the Film Noir The Thief (Russell Rouse, 1952), her subsequent Hollywood roles were largely unrewarding. She appeared in European films and won a Silver Bear at the Berlin International Film Festival for the Sartre adaptation No Exit (1962). Gam also worked as a documentary film maker. She was 88. 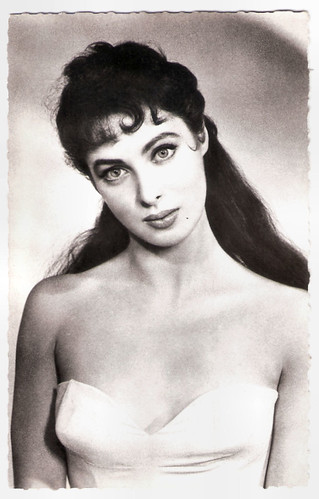 
Rita Gam was born Rita Eleanore MacKay in Pittsburgh, Pennsylvania, in 1927. She was the daughter of Belle (Fately), a Romanian Jewish immigrant, and Milton A. MacKay. Her mother remarried in 1932. She took on the surname of her stepfather, Benjamin Gam, a Russian Jewish immigrant. Gam was raised in New York City.

Gam was a founding member of the Actor's Studio. She landed a role on Broadway in 1946 in A Flag Is Born, written by Ben Hecht. She also began to work on television, after which she moved on to films.

She first appeared in the Film Noir The Thief (Russell Rouse, 1952), which starred Ray Milland. The film is unusual because the entire story is told without dialogue. Gam was nominated for a Golden Globe as Most Promising Newcomer. Craig Butler at AllMovie: "Rouse brilliantly finds ways of telling the story without sacrificing any tension, suspense, or emotional impact. working with cinematographer Sam Leavitt, whose noir-ish camerawork is nothing short of a marvel, he shapes and tells the story in a compelling and gripping manner."

In October 1952, she signed a long-term MGM contract. She was briefly suspended from working in October 1953 for turning down the feminine lead in  the Dean Martin-Jerry Lewis comedy Living It Up (Norman Taurog, 1954). The part went to Janet Leigh.

Another interesting Film Noir was Night People (Nunnally Johnson, 1954). The story is set in Berlin during the years following World War II. Gregory Peck plays a counter-intelligence officer of the United States Army. That years she also appeared in Sign of the Pagan (Douglas Sirk, 1954) about Attila the Hun (Jack Palance) and his invasion of Rome.

In 1956, she was a bridesmaid at her good friend Grace Kelly's wedding to Prince Rainier of Monaco. Soon after Gam and Kelly had signed contracts with MGM, they roomed together with another girl in a one-bedroom apartment in Hollywood. They remained close until Kelly's death in 1982.

In Italy she starred opposite Alberto Sordi in the comedy Costa Azzurra/Wild Cats on the Beach (Vittorio Sala, 1959) and she was the leading lady of the Peplum Annibale/Hannibal (Carlo Ludovico Bragaglia, Edgar G. Ulmer, 1959) featuring Victor Mature. Despite being an Italian production the latter was mainly financed by American studio Warner Brothers. 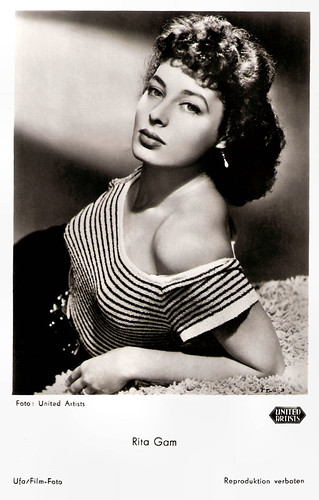 
Rita Gam played Herodias in the biblical epic film King of Kings (Nicholas Ray, 1961) about the life of Christ (Jeffrey Hunter), from his birth and ministry to his crucifixion and resurrection.

Gam shared the Silver Bear for Best Actress award with Viveca Lindfors at the 1962 Berlin Film Festival, for their performances in No Exit (Tad Danielewski, Orson Welles (uncredited), 1962), based on the play Huis Clos by Jean-Paul Sartre. The story is about three people locked in a room: a journalist who betrayed members of the resistance movement in World War II (Morgan Sterne), a lesbian who tempted a married woman to leave her husband (Lindfors), and a social-climber (Gam) who killed her son and drove her husband to suicide. They quickly discover there is literally no exit in the room: they are trapped like rats in a cage, dead and in hell.

In 1963, Gam became a leading member of The Minnesota Theatre Company in the opening season of The Tyrone Guthrie Theater in Minneapolis, with Zoe Caldwell, Hume Cronyn and Jessica Tandy.

Later she appeared in small parts in films like the acclaimed crime thriller Klute (Alan J. Pakula, 1971), before taking up documentary film making. She produced the documentary series World of Film, which examined the film business around the world, and the PBS travel series World of Beauty.

Her final film appearance was in the Canadian-Japanese sports drama Rowing Through (Masato Harada, 1996). In 2003, she was in the rotating cast of the off-Broadway stage reading of Wit & Wisdom. Among her other notable stage productions were Hamlet with Dan Mason and Broadway's There’s a Girl in My Soup with Gig Young.

Rita Gam died of respiratory failure at Cedars-Sinai Medical Center in Los Angeles. She was married from 1949 till 1954 to director Sidney Lumet and from 1956 to 1963 to Thomas Henry Guinzburg, Jr., the first managing editor of The Paris Review and president of Viking Press. Survivors include her daughter, film producer Kate Guinzburg, her son, novelist Michael Guinzburg; and granddaughters Michelle, Olivia and Louisa.