British film actress Anne Heywood (1931) started her career as Miss Great Britain in 1950. In the mid-1950s, she began to play supporting roles as the ‘nice girl’ for Rank. Gradually she evolved into a leading lady, best known for her dramatic roles in the pioneer lesbian drama The Fox (1967) and the 'nunsploitation' La monaca di Monza/The Nun of Monza (1969). 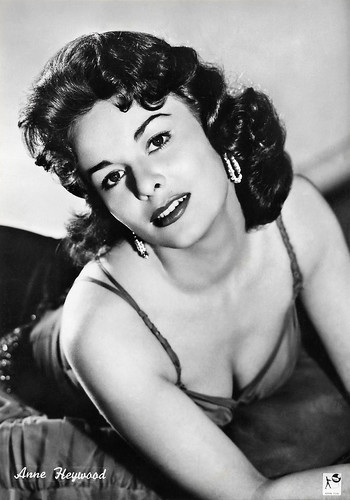 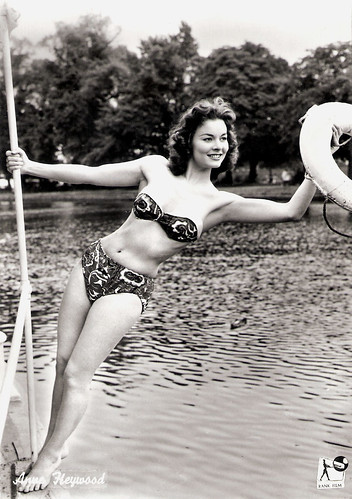 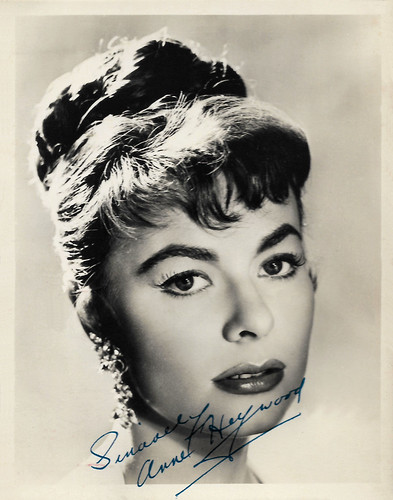 British autograph card by the Rank Organisation. Publicity still for The Heart of a Man (Herbert Wilcox, 1959). Sent by mail in 1959.


Anne Heywood was born as Violet Joan Pretty in Handsworth (now Birmingham), England in 1932. She was one of seven children. Her father, Harold Pretty, was a former orchestral violinist, turned factory worker. Her mother died when Violet was just 13.

Violet had to leave school at 14 to look after the younger members of her family. This frustrated her wish to go to art school. Instead, she joined the Highbury Little Theatre in Sutton Coldfield near Birmingham in 1947 and stayed there for two years gaining stage experience.

At only 17, the knockout brunette won the National Bathing Beauty Contest in 1950, later renamed as the "Miss Great Britain" contest. Her prizes were £1000 and a silver, rose bowl. The following year she made her film debut as a beauty contestant in the comedy Lady Godiva Rides Again (Frank Launder, 1951) with Dennis Price.

That year she also became the personal assistant of Carroll Levis, a talent spotter on a radio show, which toured the main theatres of Great Britain. She stayed at the show for four years and even appeared three times with the show on television. Heywood attended the London Academy of Music and Dramatic Art.

While playing the principal boy in Aladdin at the Chelsea Palace, she was spotted by a talent scout for the Rank Organisation. In 1956, she signed a seven-year contract and her name was changed to Anne Heywood. According to Glamour Girls at the Silver Screen, she later recalled: “I always hated my name. It sounded unreal.” 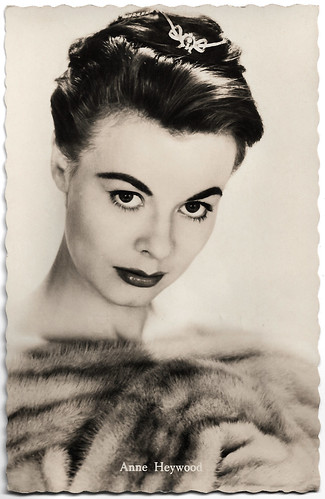 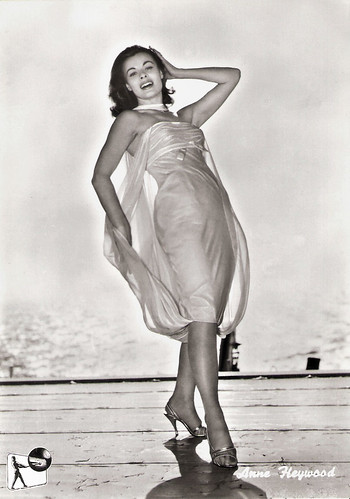 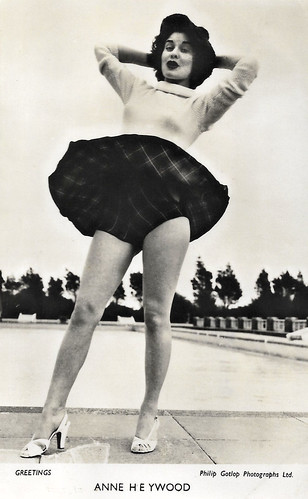 
Anne Heywood met producer Raymond Stross in 1959 at the set of A Terrible Beauty/The Night Fighters (Tay Garnett, 1960) starring Robert Mitchum. A year later, they married in Zurich, Switzerland. He was 16 years her senior. Stross started to reshape her image with such sexy, offbeat dramas as The Very Edge (Cyril Frankel, 1963) with Richard Todd, and 90 Degrees in the Shade (Jiri Weiss, 1965). At the Berlin Film Festival, the latter won the International Critics' Prize.

Her breakthrough role was Ellen March in The Fox (Mark Rydell, 1967), co-starring Sandy Dennis. This film adaptation of a D. H. Lawrence novella caused controversy at the time due to its lesbian theme. Gary Brumburgh at IMDb on Heywood and Dennis: “the two were quite believable as an unhappy, isolated couple whose relationship is irreparably shattered by the appearance of a handsome stranger (Keir Dullea). At the height of the movie's publicity, Playboy magazine revealed a ‘pictorial essay’ just prior to its 1967 release with Anne in a nude and auto-erotic spread.”

Heywood was nominated for the Golden Globe Award for Best Actress. The Fox, a Canadian film, did win the Best Foreign Film Golden Globe. Heywood did not win. The Fox is now respected as a pioneer, ground-breaking lesbian film.

Heywood’s next film was La monaca di Monza/The Nun of Monza (Eriprando Visconti, 1969) with Hardy Krüger. This controversial drama tells the tale of how a 17th-century Italian nun's long-repressed sexual passion is awakened when a handsome nobleman rapes and impregnates her. Later she is captured and given a horrible life sentence. This ‘true story’ of Sister Virginia, the nun of Monza, was shot in a fifteenth-century castle 27 miles north of Rome and in medieval churches in Lombardy, where the original story took place. This quite nasty and exploitative drama grossed more than $1,000,000 in its initial run in Italy and paid back its negative cost in three weeks. The box office success led to an Italian sub-genre of ‘nunsploitation’ films in the 1970s. 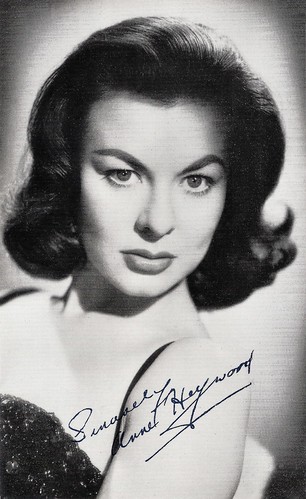 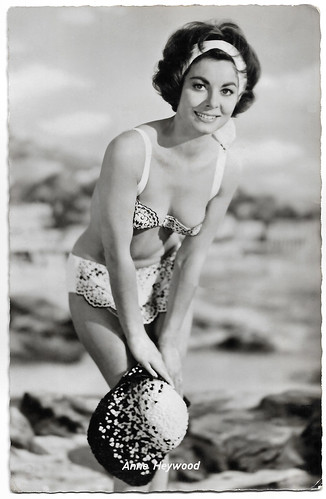 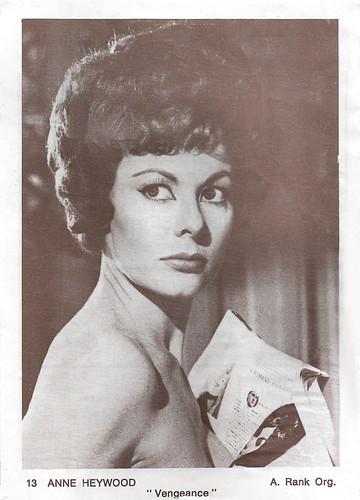 Belgian chromo by Merbotex, Brussels, presented by Cine Metro, Antwerpen (Antwerp), no. 13. Photo: A. Rank Org. Anne Heywood in The Brain (Freddie Francis, 1962). Caption: Vengeance. Vengeance was the working title of the film.

The Killer Is on the Phone


Anne Heywood and Raymond Stross moved from Switzerland to the US. Despite the Golden Globe nomination and the Playboy spread, Heywood never endeared herself to American filmgoers. Her Hollywood productions as the caper Midas Run (Alf Kjellin, 1969) with Fred Astaire, and the action drama The Chairman (J. Lee Thompson, 1969) with Gregory Peck were no successes.

She seemed drawn toward highly troubled, flawed characters, like in I Want What I Want (John Dexter, 1972) and Good Luck, Miss Wyckoff (Marvin J. Chomsky, 1979).

In the 1970s, she also appeared in several Italian films, including the Giallo L'assassino... è al telefono/The Killer Is on the Phone (Alberto De Martino, 1972) with Telly Savalas and Willeke van Ammelrooy, the nunsploitation Le monache di Sant'Arcangelo/The Nun & The Devil (Domenico Paolella, 1973) with Ornella Muti, and the romantic drama La prima volta sull'erba/Love Under the Elms (Gianluigi Calderone, 1975).

Her career declined in the 1980s. Her final feature was What Waits Below (Don Sharp, 1985). Hal Erickson at AllMovie: “a goofy fantasy filmed on the cheap by the ever-canny Don Sharp. The story involves a team of anthropologists and military men who busy themselves exploring a serpentine system of subterranean caves. They discover a lost race of Albinos, which wreaks havoc upon the surface-dwelling humans. The British actor Robert Powell and Timothy Bottoms star. According to some sources, Sharp and co. approached the production with extreme carelessness; thanks to an unfortunate accident, a large percentage of the cast and crew were almost fatally poisoned by carbon monoxide in the caves where the movie was filmed.”

Heywood's penultimate role was as Manon Brevard Marcel on the American TV series The Equalizer (1988), starring Edward Woodward. In 1988 her husband Raymond Stross died. The following year she was seen in a final television movie, Memories of Manon (Tony Wharmby, 1989) based on the character from The Equalizer.

After this role, she retired. She married George Danzig Druke, a former New York Assistant Attorney General. Anne Heywood Druke resides with her husband in Beverly Hills, USA. She has one son, Mark Stross (1963), with Raymond Stross.