Blonde and curvey bombshell Diana Dors (1931-1984) was called ‘The English Marilyn Monroe’, to her disgust. In her own words: "I was the first home-grown sex symbol, rather like Britain's naughty seaside postcards. When Marilyn Monroe's first film was shown here [The Asphalt Jungle (1950)], a columnist actually wrote, 'How much like our Diana Dors she is'." 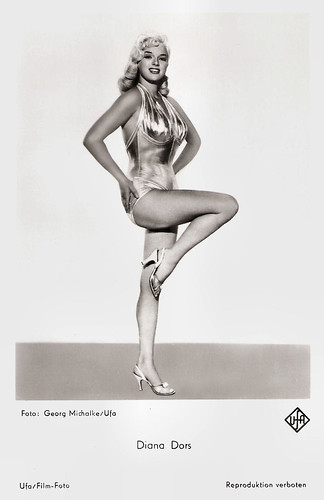 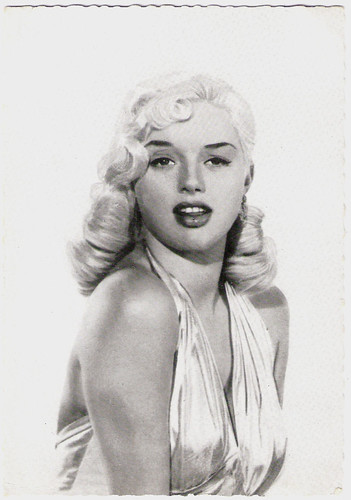 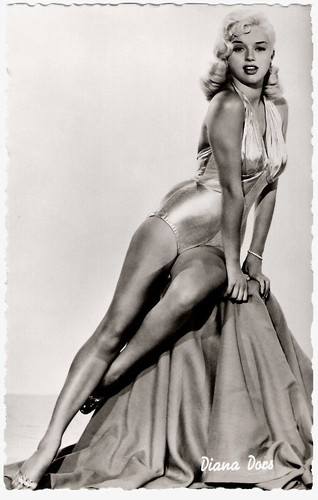 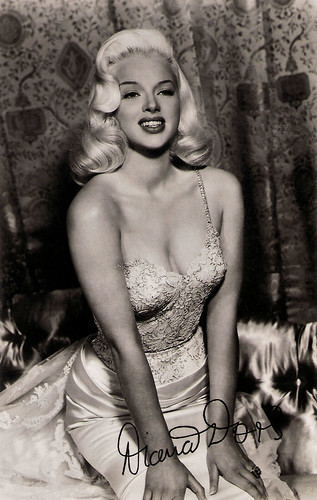 British promo card for Empire News and Sunday Chronicle. The card announced that Diana Dors would write a series of articles for the two-in-one Sunday newspaper about her adventures in Hollywood. In Hollywood she made The Unholy Wife (John Farrow, 1957) and I Married a Woman (Hal Kanter, 1958). The latter was filmed between mid-July and late August 1956 and the card was probably produced in 1956 or 1957. 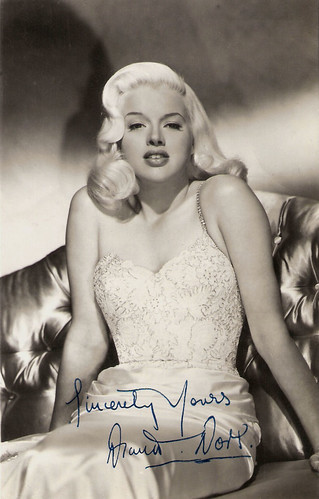 The Siren of Swindon


Diana Dors was born Diana Mary Fluck in Swindon, England, in 1931. Her father, Peter Fluck, was a railroad employee. Her mother, Mary Fluck, had almost died from the traumatic birth of her daughter. Because of this trauma, she lavished on Diana everything she herself had dreamed of: clothes, dance lessons, visits to the cinema. The actresses on the screen caught Diana's attention and she later told that she wanted to be an actress from the age of three.

Physically, Diana grew up fast and she looked and acted much older than what she was. 'The Siren of Swindon' began her career on stage while she was only 13. The youngest of her class, she trained at the London Academy of Music and Dramatic Arts (LAMDA) in London.

At the age of 15, she appeared in her first film, The Shop at Sly Corner (George King, 1947) starring Oskar Homolka. The J. Arthur Rank Organisation offered her a contract and she played several ‘sexy girl in background’ roles in their films. The best of these parts was Charlotte in Oliver Twist (David Lean, 1948) starring Alec Guinness.

She made several more films in the late 1940s, including substantial roles in the comedy Here Come The Huggetts (Ken Annakin, 1948), and the 'bad girl' opposite Honor Blackman's more virtuous roles in the cycling comedy A Boy, a Girl and a Bike (Ralph Smart, 1949) and Diamond City (David MacDonald, 1949), a lively British 'Western' set in South Africa's diamond fields.

Her appeal stemmed from a combination of glamour and humour, coupled with a lack of vanity. A good example of her early appeal comes in Lady Godiva Rides Again (Frank Launder, 1951) with Dennis Price. It was a light hearted romp that made fun of the beauty queen business. The American Board of Film Censors had banned the film because Diana was showing her navel. However she's friendly and surprisingly non-threatening in the film, more interested in having fun than in winning. Both critics and the public loved her as a sexy siren. 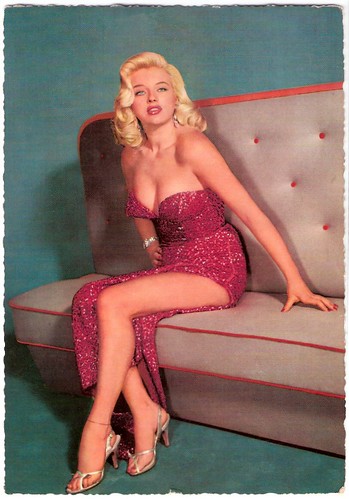 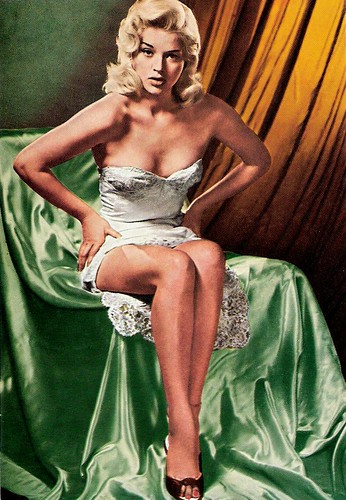 German postcard by Terra-Colour, no. PU 4. 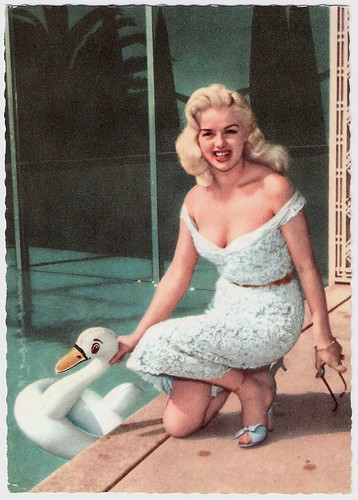 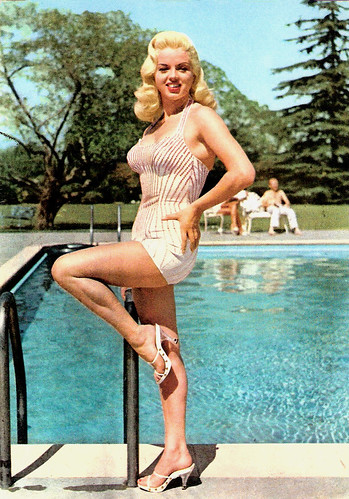 Italian postcard by Rotalcolor, no. 18. 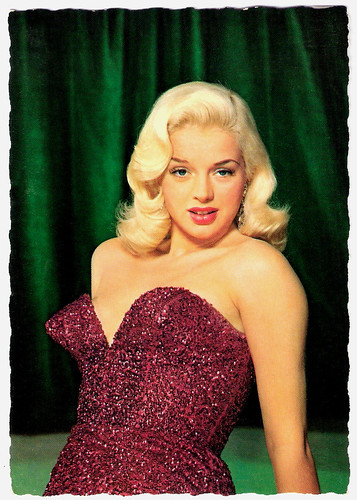 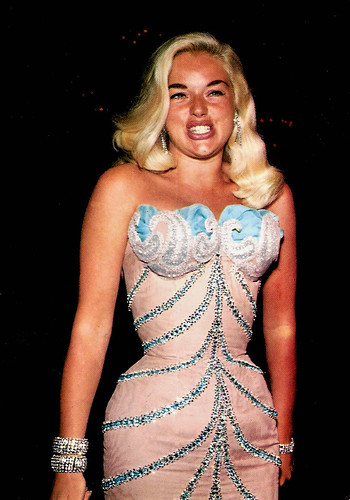 Spanish postcard by Oscarcolor, no. 331.


Diana Dors was one of the very first celebrities to actually court the British press. Her first husband and manager Dennis Hamilton believed any publicity either good or bad could only benefit the ambitious starlet. One stunt was to set up the company Diana Dors Ltd and another was the announcement of Diana as the youngest Rolls Royce owner at the age of 20 (however, she could not drive).

Dors got a 'decent' role in the 'women in prison' drama The Weak and the Wicked (J. Lee Thompson, 1954) opposite Glynis Johns and people started to believe she could act as well as look decorative. She confirmed her talent with a good role in the fantasy A Kid for Two Farthings (Carol Reed, 1955) with Celia Johnson, and her part as a murderess in Yield to the Night (J. Lee Thompson, 1956), loosely based on the true life story of Ruth Ellis, the last woman executed in Britain for murder.

Casting off her sex symbol image, Diana portrayed Mary Hilton whose story is told entirely in flashbacks, as she awaits her final sentencing or possible reprieve, and attempts to tie up the loose ends in her life involving her mother, brother, and husband. Michael Brooke writes at BFI Screenonline: "Eyebrows were raised at Dors being offered such a challenging dramatic role, given that her blonde bombshell image at the time was almost exclusively associated with comedy, but she rose to the occasion, managing to evoke considerable sympathy for her condemned but essentially unsympathetic character."

Dors was snapped up by Hollywood, but she was put in two unsuitable vehicles, the crime thriller The Unholy Wife (John Farrow, 1957) with Rod Steiger, and the comedy I Married a Woman (Hal Kanter, 1958).

A very public brawl between her and her husband, Dennis Hamilton, finished her Hollywood career. At a pool party full of Hollywood A-list celebrities, Diana was pushed fully clothed into her swimming pool. Hamilton then proceeded to punch the photographer thought to have pushed her into unconsciousness. The celebrities fled and the headlines the following day were 'Ms Dors go home and take Mr Dors with you!'. Her three movie deal with RKO ended after they cancelled the contract on a moral clause in the contract. 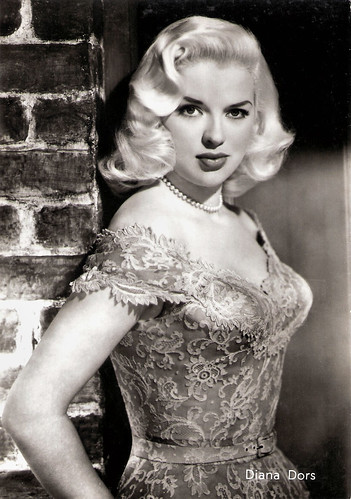 Italian postcard by Bromostampa, Milano, no. 10. 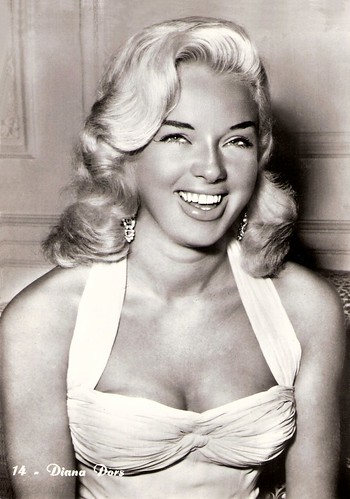 Italian postcard by Turismofoto, no. 14. 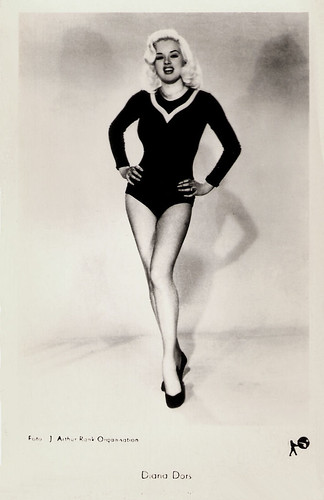 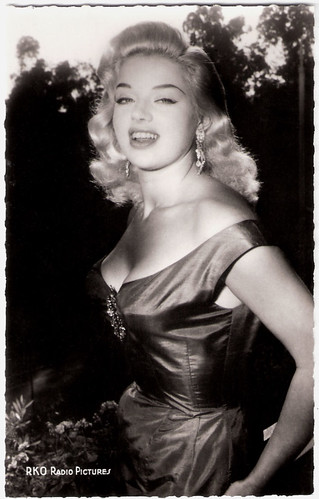 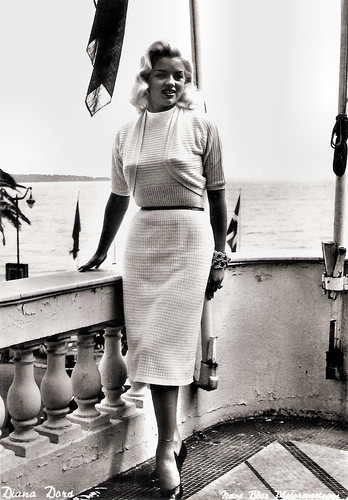 Italian postcard by Bromofoto, Milano, no. 1251. 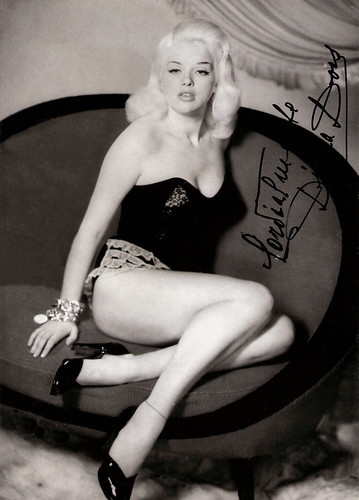 
Diana Dors returned to Britain, but she never quite attained the level of her pre-Hollywood period. During the 1960s Dors never stopped working but her roles got smaller and the films worse. In the campy horror film Beserk! (Jim O'Connolly, 1967), she played a performer in a cheesy carnival who ends up cut in half by a power saw. The film starred 63-year-old Joan Crawford who played the outrageous owner and ringmaster of a travelling circus, who'll stop at nothing to draw bigger audiences...

Dors was often seen on TV both in the US and the UK. She began to pile on the pounds and rapidly went from blowsy to fat. One of her weighty roles was as the ex-wife of Peter Sellers in There's a Girl in My Soup (Roy Boulting, 1970). Her appearance in The Amazing Mr Blunden (Lionel Jeffries, 1972) got a lot of publicity as she played a slatternly Victorian housekeeper in her sixties.

Her major television breakthrough came in 1970, when she starred as a brassy matriarch in Keith Waterhouse and Willis Hall's popular ITV sitcom Queenie's Castle (1970-1972). Despite these successes she continued to accept any role going and took small parts in several British sex comedies, such as Adventures of a Taxi Driver (Stanley Long, 1976).

Diana Dors died in 1984 from a recurrence of ovarian cancer, first diagnosed two years earlier. She was 52 years old. For over thirty years she had lived her life in the headlines, and now she was missed. She had three sons, Mark and Gary Dawson from her second marriage to comedian/TV emcee Richard Dawson, and Jason Lake from her third marriage to actor Alan Lake. Alan Lake committed suicide not long after her death, which generated even more headlines.

Her final film, the Nell Dunn adaptation Steaming (Joseph Losey, 1985) starring Vanessa Redgrave, was released a year later. During her career of nearly four decades, Diana Dors was loved by the British public, and her life, both professional and personal, was followed in a whole new way. Through the media, her life was made accessible to the British public: she was down to earth, made mistakes, had a vulnerability about her and the public followed her ups and downs through the many daily newspapers and magazine articles.

Together with 'The Three M's' from Hollywood: Jayne Mansfield, Mamie Van Doren and Marilyn Monroe, DD has left her mark on popular culture by popularising the 1950s blonde bombshell look. As David Absalom at British Pictures writes: "She's been a National Joke and a National Disgrace in her time, but when she died we realised we'd lost a National Treasure." 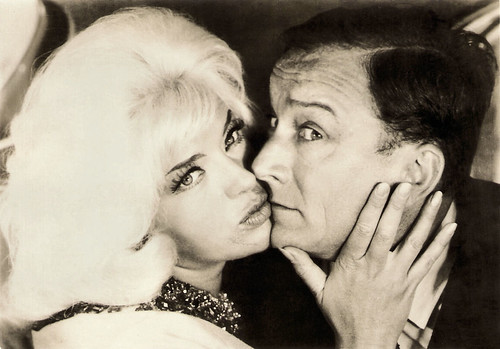 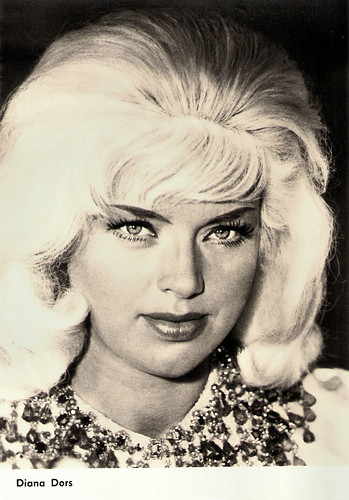 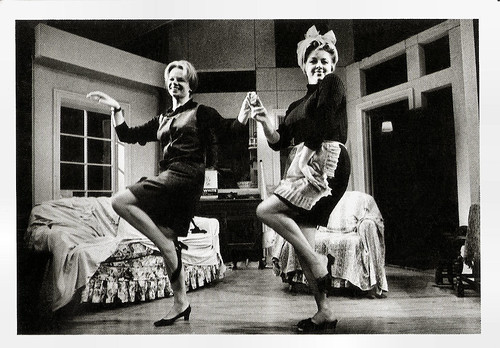