Exported to the USA: Arnold Schwarzenegger

Austrian-born muscleman, Hollywood star and politician Arnold Schwarzenegger (1947) started his career as a bodybuilder, who won several European contests and international titles. ‘The Austrian Oak’ moved to the US and was a millionaire at 21. He achieved stardom in the documentary Pumping Iron (1977) and established himself as an action star with Conan the Barbarian (1982). As the murderous android title character in The Terminator (1984) and its sequels, Schwarzenegger became a bona fide box-office draw and the cigar-chomping strongman went on to star in interesting box office hits as Predator (1987), Total Recall (1990) and True Lies (1994). His most notable role of the new millennium was political - as governor of California. 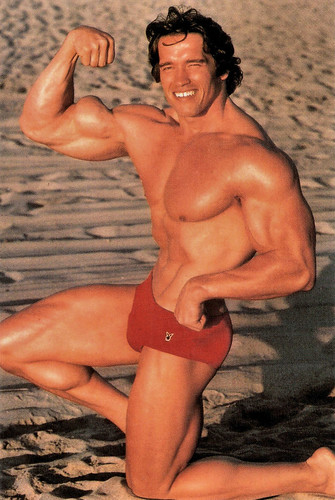 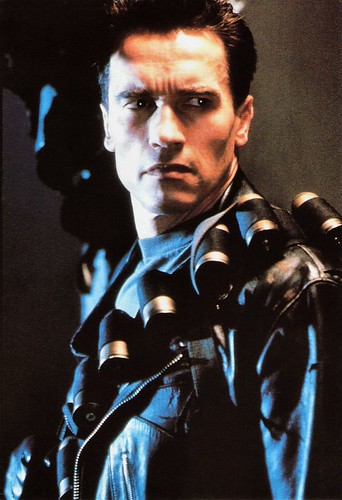 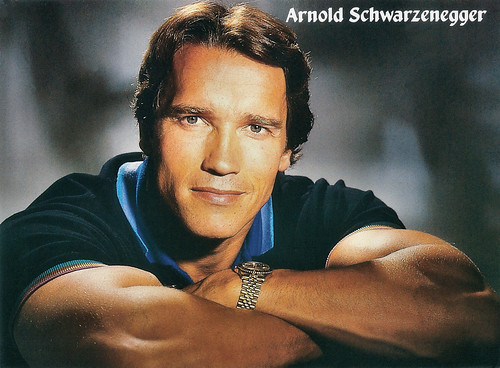 
Arnold Alois Schwarzenegger was born in 1947 in the village Thal near the small Austrian town of Graz. His parents were Gustav and Aurelia Schwarzenegger.

His father, was an alcoholic police chief and one-time member of the Nazi Party, who clearly favoured Arnold's brother over his gangly, seemingly less athletic younger son. Gustav is reported to have beaten and intimidated Arnold and pitted his two boys against one another. Schwarzenegger would later refuse to attend the funeral of his father, who died in 1972, or his brother, who was killed in a car crash in 1971.

Gustav wanted Arnold to become a soccer player, but the 15-year-old opted for weight training. He frequented the local cinemas to see bodybuilding idols such as Reg Park and Steve Reeves on the big screen. In 1961, Schwarzenegger met former Mr. Austria Kurt Marnul, who invited him to train at the gym in Graz.

During his army service in 1965, Arnold won the Junior Mr. Europe contest. Arnold went on to win several European contests. This was his ticket to the U.S., where he billed himself for body-building exhibitions as ‘The Austrian Oak’. At age 20, he won the first of five Mr. Universe titles, and three years later, he captured his first Mr. Olympia title. He would win the title a total of seven times.

Hal Erickson at AllMovie: “Though his thick Austrian accent and slow speech patterns led some to believe that the Austrian Oak was shy a few leaves, Schwarzenegger was, in fact, a highly motivated and intelligent young man. After graduating from the University of Wisconsin with a degree in business and economics, he invested his contest earnings in real estate and a mail-order bodybuilding equipment company.”

At 21, Schwarzenegger was a millionaire via shrewd investments and decided to try acting. Producers were impressed by his physique but not by his last name, so he made his film debut with a dubbed voice and as Arnold Strong in Hercules in New York (Arthur A. Seidelman, 1970), a low-budget parody of the sword and sandal epics of Arnold’s youth.

He reverted to his own name for Stay Hungry (Bob Rafelson, 1976), with Jeff Bridges. For his part, he was awarded a Golden Globe for New Male Star of the Year. Then he achieved stardom as ‘himself’ in Pumping Iron (George Butler, Robert Fiore, 1977) about a group of men training for the Mr. Olympia contest. Arnold had already won the title six times before, and was training for his seventh victory before retiring to fully pursue his acting career.

In The Villain (Hal Needham, 1979), a cartoon-like Western parody, he played ‘Handsome Stranger,’ exhibiting a gift for understated. In 1980, he starred opposite Loni Anderson in the TV biopic The Jayne Mansfield Story (Dick Lowry, 1980) as Mansfield's husband, Mickey Hargitay. 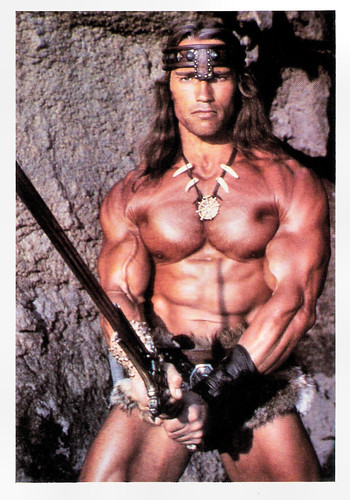 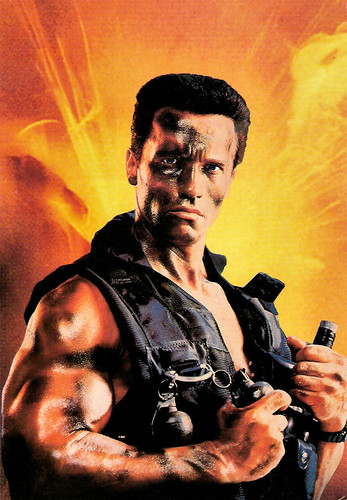 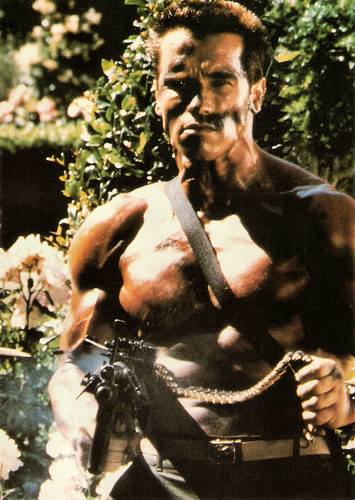 
Arnold Schwarzenegger established himself as an action star with his role as the barbarian warrior Conan in the formidable Conan the Barbarian (John Milius, 1982) and its inferior though enjoyable sequel, Conan the Destroyer (Richard Fleischer, 1984).

As the murderous android title character in The Terminator (James Cameron, 1984), Schwarzenegger became a bona fide box-office draw. Made on a relatively modest budget, the high voltage action / science fiction thriller was incredibly successful worldwide, and began one of the most profitable film franchises in history. Schwarzenegger's catchphrase "I'll be baaaack" became part of popular culture around the world.

Then followed two of his best action films: Predator (John McTiernan, 1987) - an entertaining marriage of action and science fiction about a team of commandos hunted by an extra-terrestrial warrior in a South-American jungle, and Paul Verhoeven's wild and sublime Sci-Fi action film Total Recall (Paul Verhoeven, 1990).

Total Recall, loosely based on the Philip K. Dick story We Can Remember It for You Wholesale, tells the story of a construction worker who goes for virtual vacation memories of the planet Mars, but an unexpected and harrowing events force him to go to the planet for real - or does he?

Stuart Wood at IMDb: “Total Recall is without doubt Arnold Schwarzenegger's best movie since The Terminator. Arnold fits perfectly in the role of Doug Quaid (definitely his best acting in a movie to date) the confused construction worker and Ronny Cox provides his usual evil plotting arch bad-guy. The impressive visual effects are worth the movie's $100 million price tag, and Paul Verhoeven proved that, as with Robocop and Starship Troopers, sci-fi is where he does his best work.“

Terminator 2: Judgment Day (James Cameron, 1991), wherein ‘Arnie’ exercised his star prerogative and insisted that the Terminator become a good guy, was the most expensive film ever made up to its time and became one of the biggest moneymakers. The actor's subsequent action films were equally as costly.

Hal Erickson: “sometimes the expenditures paid off, while other times the result was immensely disappointing - for the box-office disappointment Last Action Hero (1992), Schwarzenegger refreshingly took full responsibility, rather than blaming the failure on his production crew or studio.” 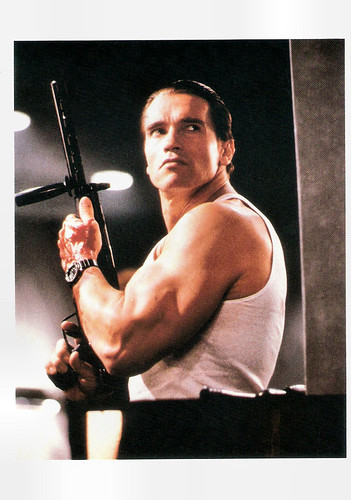 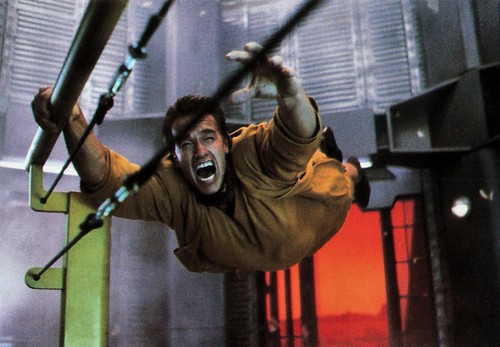 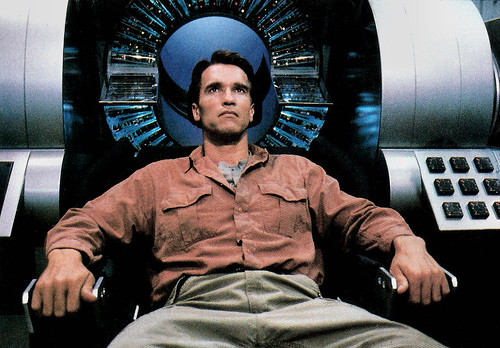 
Arnold Schwarzenegger is a rock-ribbed Republican despite his former marriage to JFK's niece, Maria Shriver, with whom he has four children. He was appointed by George Bush in 1990 as chairman of the President's Council of Physical Fitness and Sports, a job he took as seriously and with as much dedication as any of his films.

A much-publicised investment in the showbiz eatery Planet Hollywood increased the coffers in Schwarzenegger's already bulging bank account. Schwarzenegger then added directing to his many accomplishments, piloting a few episodes of the TV series Tales From the Crypt as well as the TV-movie Christmas in Connecticut (1992) with Dyan Cannon, a remake of the classic Christmas in Connecticut (Peter Godfrey, 1945) with Barbara Stanwyck.

Schwarzenegger bounced back from the disastrous Last Action Hero (John McTiernan, 1990) with True Lies (James Cameron, 1994), which was one of the major hits of that summer.

Following the success of True Lies, Schwarzenegger went back to doing comedy with Junior (Ivan Reitman, 1994), co-starring with Emma Thompson. The film met with critically mixed results, although it fared decently at the box office.

Schwarzenegger continued to alternate action with comedy with Eraser (Chuck Russell, 1996) and Jingle All the Way (Brian Levant, 1996). The latter proved to be both a critical bomb and a box-office disappointment. Schwarzenegger returned to action films with Batman & Robin (Joel Schumacher, 1997), in which he played the villain Mr. Freeze. Unfortunately the film proved to be a huge critical disappointment. 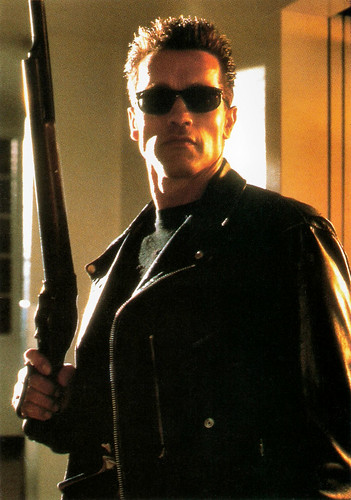 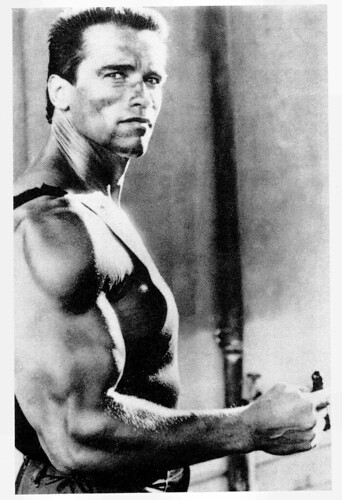 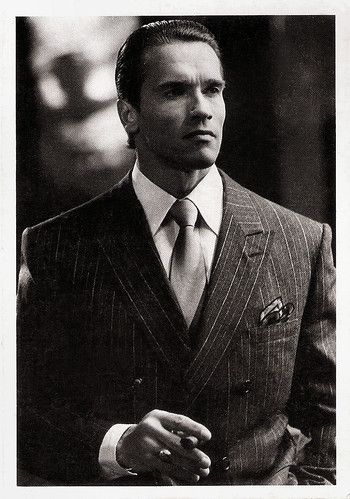 
The turn of the century found Arnold Schwarzenegger's film career and box office prominence into decline. He made two millennial paranoia films, End of Days (Peter Hyams, 1999) and The 6th Day (Roger Spottiswoode, 2000), both failures. Collateral Damage (Andrew Davis, 2002) also failed to do well at the box office.

Fans rejoiced when Arnold resumed his role as a seriously tough cyborg in Terminator 3: Rise of the Machines (Jonathan Mostow, 2003). Jeremy Wheeler at AllMovie: “What T3 does effectively is bring back the mix of highly intense action, character-driven humor, and technological wizardry that the big screen had been lacking for more than a decade since Terminator 2: Judgment Day. There's a direct understanding of the series core dynamics, and once things kick in, there's no doubt that you're back in Terminator-land. Arnold Schwarzenegger eases back into the role effortlessly, bringing an understanding to the lovable cyborg that goes beyond simple line delivery and stoic screen presence.”

Though Schwarzenegger made a cameo in Around the World in 80 Days (Frank Coraci, 2004), his most notable role of the new millennium was political. In 2003 he became the governor of California, and ‘The Governator’ served two terms until 2011.

In 2010, Schwarzenegger was among the all-star cast of action-movie icons in The Expendables (Sylvester Stallone, 2010), an action thriller following a group of tough-as-nails mercenaries as they deal with the aftermath of a mission gone wrong. He reprised his role for The Expendables 2 (Simon West, 2012) and The Expendables 3 (Patrick Hughes, 2014).

The Last Stand (Kim Jee-woon, 2013) was his first leading role in 10 years. More recently he returned to the Terminator franchise in Terminator Genisys (Alan Taylor, 2015) and he produced and acted in the dramatic horror film Maggie (Henry Hobson, 2015). His most recently released film is the thriller Aftermath (Elliott Lester, 2017). 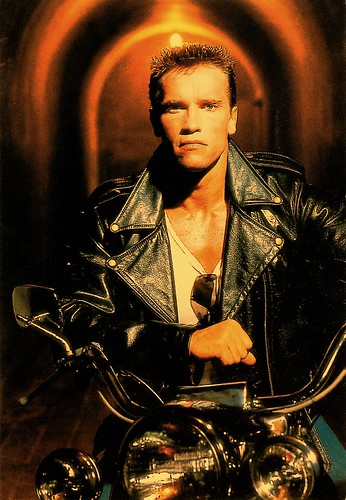 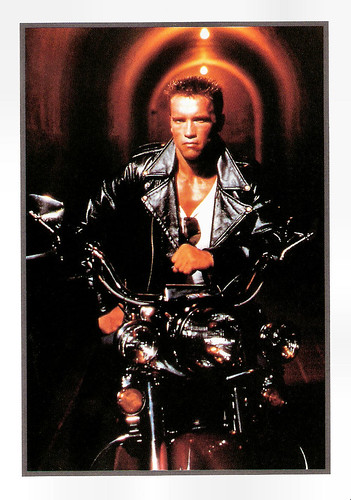 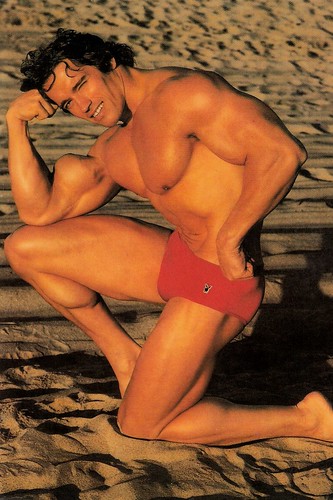