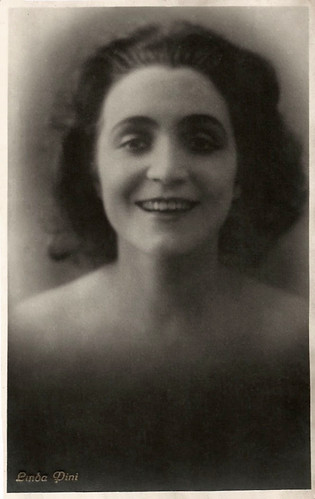 
Linda Pini was born as Gerlinda Filippini in Milan in 1896.

She probably made her film debut as Santuzza in the adaptation of Giovanni Verga’s drama Cavalleria rusticana (1916), directed by Ubaldo Maria Del Colle, who also played Turiddu. At the time the film was accompanied by the music of Pietro Mascagni’s homonymous opera.

Del Colle directed her again in Zingari/Gypsies (Ubaldo Maria Del Colle, 1916), another example of a famous story (by Alexander Pushkin) turned into an opera (by Ruggero Leoncavallo), turned into a film. Again Pini had the leading role. The press praised not only Pini’s performance, but also the spectacle side of the film and the costumes by Caramba, who was then already a well-known set and costume designer at the theatre.

Pini then went to play for the Silentium Film company in Milan, where she had leading roles, first in L’illusione/The illusion (Guglielmo Zorzi, 1917), which the press disliked, while another film by Zorzi, La felicità/The happiness (Guglielmo Zorzi, 1918), was lauded for Pini’s performance.

The press complained when Pini’s beauty was constantly hidden in another Silentium production, La storia di una capinera/The History of a Sparrow (Giuseppe Sterni, 1917). The film about a nun who goes berserk, was based on a novel by Giovanni Verga. The next Silentium production La nemica/The Enemy (Ivo Illuminati, 1917), based on the play by Dario Niccodemi, got better reviews. Zorzi was supposed to direct this film too, but was called under the arms, so Illuminati replaced him.

Illuminati also directed Pini in Giflée (Ivo Illuminati, 1918), in which Pini was a spoiled American who changes her life, travels to Europe and does all kinds of odd jobs. Pini then moved to Turin to play in Mario Bonnard’s Il rifugio dell’alba, with Bonnard also as her co-star. 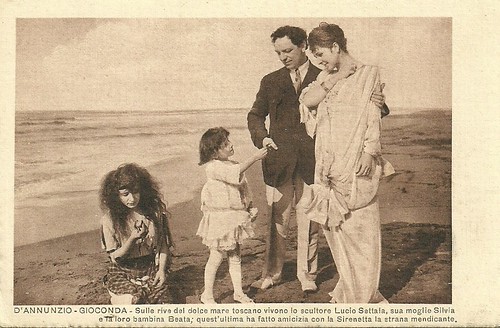 Italian postcard by IPA CT, no. 3872, V. Uff. Rev. St., Terni. Photo: Ambrosio. Caption: 'On the banks of the sweet Tuscan coast the sculptor Lucio Settala, his wife Silvia and their daughter Beata live. The latter has befriended the Little Siren, a strange beggar girl.' Postcard for the lost Ambrosio production La Gioconda (Eleuterio Rodolfi, 1916, released 1917), based on Gabriele D'Annunzio's play. While Umberto Mozzato plays Settala and Mercedes Brignone his wife, 'Sirenetta' might be Linda Pini. 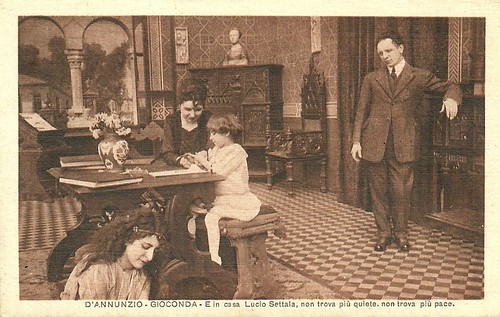 Italian postcard by IPA CT Duplex, no. 7209. Photo: Silentium-Film. Linda Pini in the Italian silent film La nemica/The Enemy (Ivo Illuminati, 1917), adapted from the play by Dario Nicodemi. Caption: 'Farewell, beloved Anna! You will become my wife at any cost!'


At the end of the First World War, Linda Pini moved to Rome where she starred in Zorzi’s film La cicala/The Cricket (Guglielmo Zorzi, 1919), in which she plays a vamp, the cricket of the film’s title.

Subsequent films were L’estranea/The extraneous one (Achille Consalvi, 1919), the Henry Bernstein adaptation Elevazione/Elevation (Telemaco Ruggeri, 1920), and Temi/Themes (Gaston Ravel, 1920) which was praised for Pini’s performance as a female lawyer who defends a young man accused of murder.

By this time Pini had reached the status of diva, though the Italian press didn’t like her too much. Next followed such films as I dannati/The damned ( Jacques Creusy, 1921), Favilla (Ivo Illuminati, 1921), and I disonesti/The cheats (Giuseppe Sterni, 1922).

After an interval of several years followed the late silent film La leggenda di Wally/La Wally (Gian Orlando Vassallo, 1930), based on the Henny Porten-film Die Geier-Wally (Ewald André Dupont, 1921). It was her last role as a silent star.

In the sound era Lina Pini played only two parts: in Fuochi d’artificio/Fireworks (Gennaro Righelli, 1938), were she had a major part opposite Amedeo Nazzari but under the pseudonym Gery Land, and in La zia di Carlo/Charlie's Aunt (Alfredo Guarini, 1943), a minor part as the real aunt. 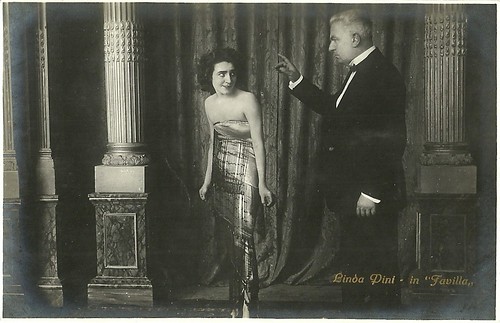 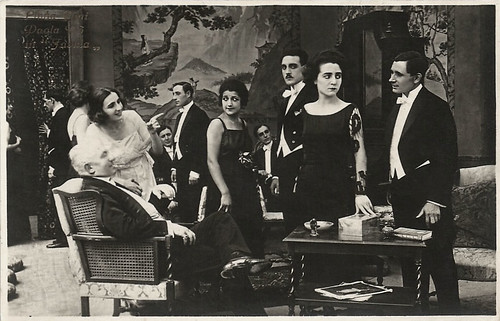 Italian postcard by G.B. Falci, Milano (Milan), no. 121. Photo: La Photominio. Publicity still for Favilla (Ivo Illuminati, 1921). At the time, this film of the Roman Medusa-Film company was not so much praised for its story as rather for its performances and the cinematography. Linda Pini plays Favilla, who is secretly in love with Cesare (Carlo Gualendri), a young engineering student and her cousin. One day Lady d'Etemps (Paola Pò) and her cousin Guglielmo visit the house of Favilla's uncle. The lady tries to seduce Cesare, because she loves his money and future inheritance. She also tries to match her cousin with Favilla. When Favilla unmasks the lady's financial interests, the other unmasks Favilla's love for Cesare. While the others leave, Cesare and Favilla exchange their first kiss...