Hungarian Maria Corda (1898-1975) was an immensely popular star of the silent cinema of Austria and Germany. The pretty, blonde actress was a queen of the popular epic spectacles of the 1920s, which were often directed by her husband, Alexander Korda. 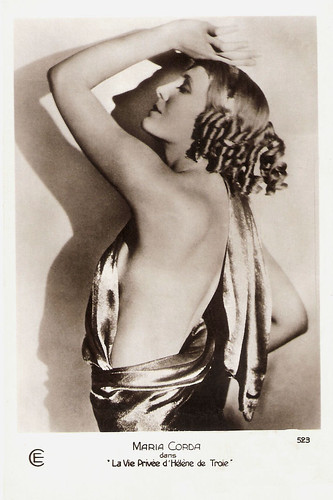 French postcard by Editions Cinémagazine, no. 523. Publicity still for The Private Life of Helen of Troy (Alexander Korda, 1927). 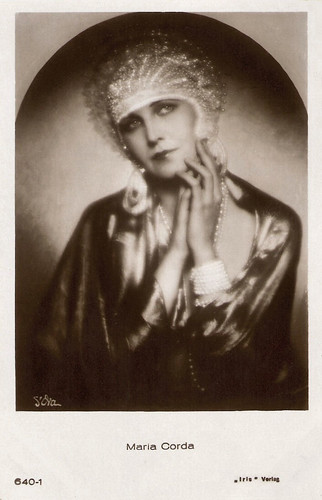 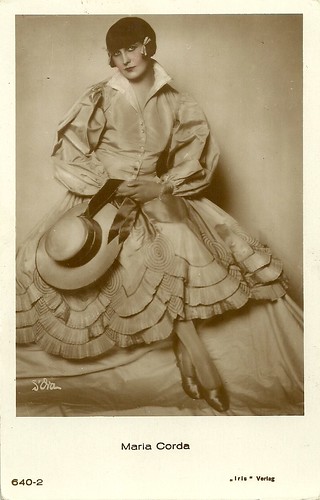 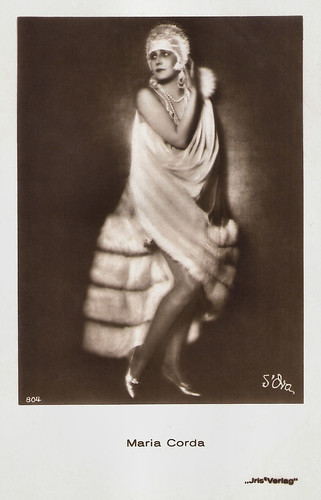 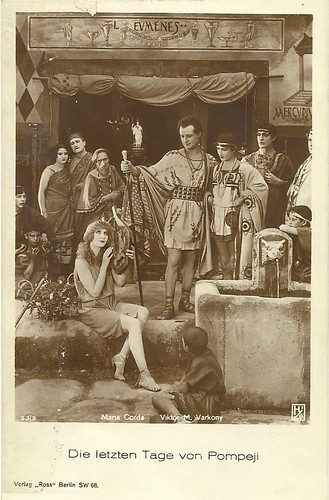 
María Corda (sometimes spelled as Korda) was born as María Antónia Farkas in Déva, Hungary in 1898.

She began her acting career in the theatres of Budapest in the early days of World War I. Soon after Hungary became an independent state she began to work in the film industry as well.

As Antónia Farkas she made her first film appearance in Se ki, se be/Not In, or Out (Sándor Korda aka Alexander Korda, 1919). In 1919 she married her director, but she would always write her last name differently to differentiate herself from her husband.

She followed Korda when he journeyed to Vienna to join the Sascha Film Company. There Korda made her a star of the European silent cinema.

Set in ancient Egypt, Die Sklavenkönigin recounts the oppression of the Jews under the despotic rule of Pharaoh Menapta. Against this backdrop is played the romantic story of Hebrew girl Merapi (Maria), the ‘Moon of Israel’, and Prince Seti (Adelqui Migliar aka Adelqui Millar), heir to the Egyptian throne.

Die Sklavenkönigin was intended for an American release that same year, under the title Moon of Israel. That release was suppressed by Cecil B. DeMille, who worried that his own The Ten Commandments would be compared unfavourably. In 1927 Moon of Israel arrived in the American cinemas, director Michael Curtiz had been hired by Warner Bros., largely on the strength of this one film. 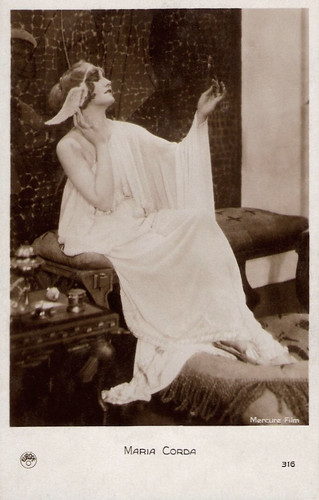 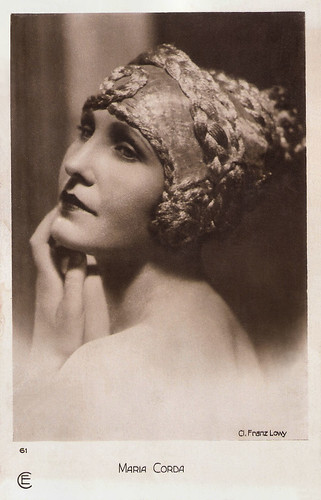 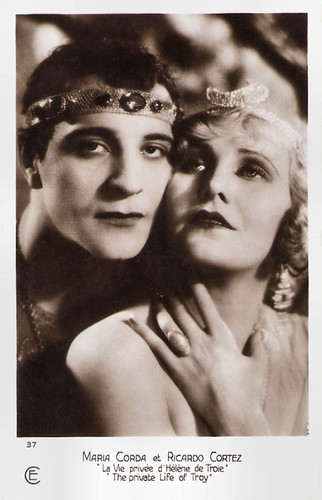 French postcard by Cinémagazine-Edition, no. 37. Photo: publicity still for The Private Life of Helen of Troy (Alexander Korda, 1927) with Ricardo Cortez. 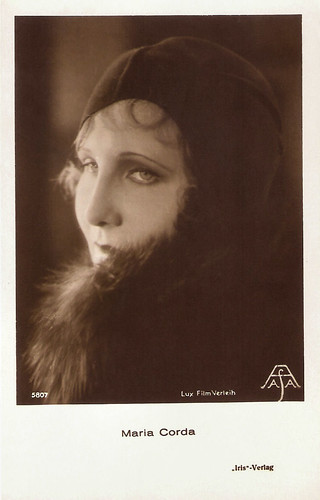 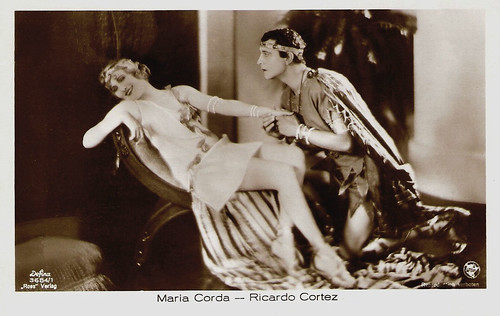 Her popularity was so huge that Austrian investors refused their grant for the Italian film Gli ultimi giorni di Pompei/The Last Days of Pompeii (Carmine Gallone, Amleto Palermi, 1926) unless the leading part would be recast with Maria Corda. And of course that’s what finally happened.

Desperately seeking his independence, Alexander Korda moved to Berlin to form his own company Korda-Film, and Maria moved with him to the German capital. There Korda directed his wife in Eine DuBarry Von Heute/A Modern DuBarry (Alexander Korda, 1926).

This final liaison very nearly topples the Andalian government, but Toinette manages to survive this ordeal without a hair out of place, though she does cry and cry a lot when things don't go her way. This film landed Korda his Hollywood contract, and he and Maria travelled to the US. 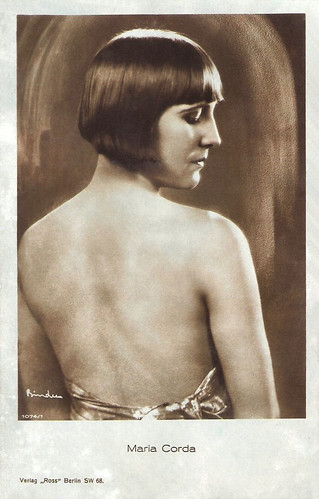 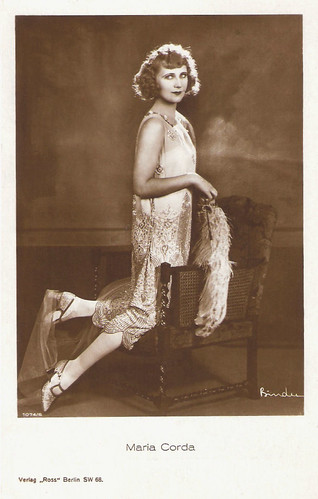 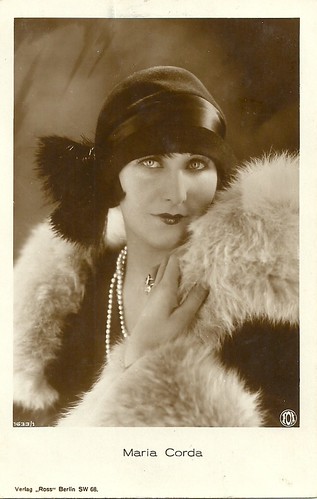 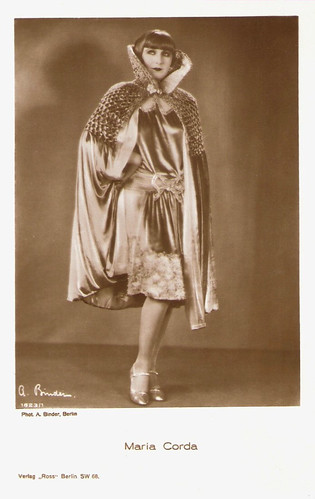 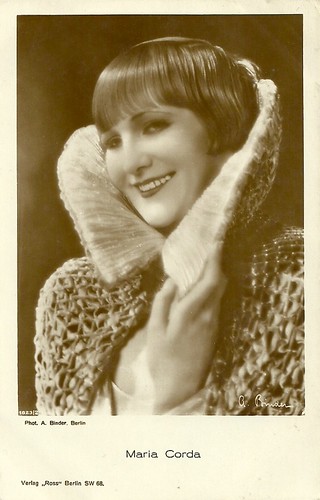 Maria Corda played the title character as a fetchingly underdressed coquette, oblivious to all the political turmoil she's causing when she allows the handsome Paris (Ricardo Cortez) to kidnap her. The film was nominated for an Academy Award in 1928, the year of the Awards' inception, in the category of Best Title Writing.

Other Hollywood productions with Corda like the early sound film Love and the Devil (Alexander Korda, 1929) enjoyed little success. She finished her Hollywood career when the sound came to stay, because her English was limited.

In Germany she made one more sound film: Rund um die Liebe/All around love (Oskar Kalbus, 1929) with Elisabeth Bergner. In 1930 Maria Corda divorced Alexander Korda and she would never make another film.

She moved to New York where she wrote novels. The formerly celebrated film goddess fell into oblivion. The later years of her life were spent in the vicinity of Geneva in Switzerland. Maria Corda died there in Thônex in 1976. She was 77. 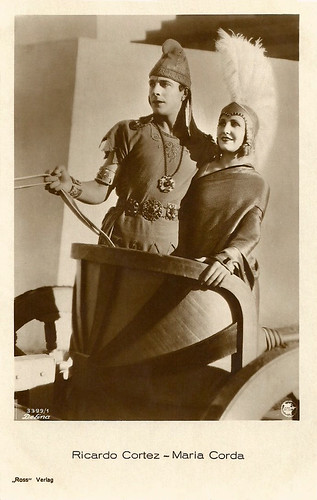 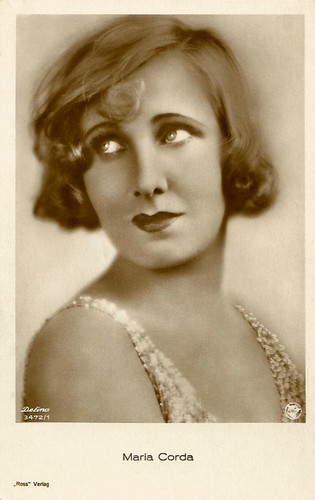 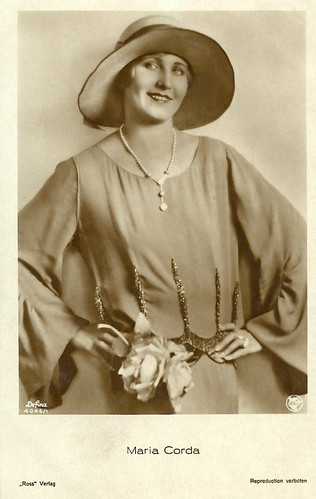 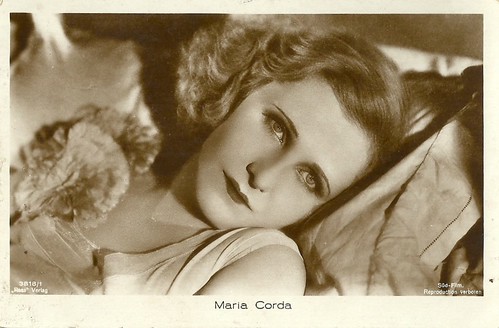