One of the programmes at Il Cinema Ritrovato we follow is Augusto Genina: an Italian in Europe. Augusto Genina (1892-1957) is one of the most cosmopolitan directors of Italian film history. Interesting is his Cielo sulla palude (1949), a Catholic variant of Neorealism. Among the cast is Italian stage and screen actress Rubi Dalma (1906-1994), aka Rubi D'Alma, who often played stereotyped roles of sophisticated and sometimes snobbish noblewomen. Besides Genina, she also worked with such directors as Righelli, Camerini, Guazzoni, Zampa and Antonioni.

Daughter of a noble family


Rubi Dalma was born as Giusta Manca di Villahermosa in Milan in 1996. She came from an aristocratic family from the Sardinian town of Sassari.

In Milan, she was discovered by Camillo Mastrocinque, who let her make her film debut in Regina della Scala/Queen of the Scala (Guido Salvini, 1936), with a bit part basically as herself: a daughter of a noble family.

Her next film, the romantic comedy Il signor Max/Mister Max (Mario Camerini, 1937), introduced her to a big audience, with her stage name Rubi Dalma. She plays the sophisticated lady Paola, courted in vain by Gianni (Vittorio De Sica), a newspaper stand vendor who pretends to be the rich snob Max Varaldo.

When Lauretta (Assia Noris), donna Paola’s maid and governess of Paola’s little sister Pucci (Adonella), falls in love with Gianni, Gianni has to change roles constantly to court both Paola and Lauretta. Of course this is bound to go wrong. Costumes were by Gino Carlo Sensani, sets by Gastone Medin. 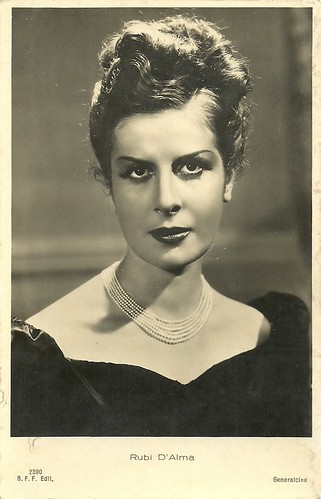 
Because of her origin, Rubi Dalma perfectly incarnated the nobility on the screen, which resulted in modern and historical roles tied to the Italian aristocracy, such as Batticuore/Heartbeat (Mario Camerini, 1939) again with Noris in the female lead, and Rose scarlatte/Red Roses (Giuseppe Amato, Vittorio De Sica, 1940) with Renée Saint-Cyr and De Sica himself.

In Renato Castellani’s adaptation of Aleksandr Pushkin’s The Shot, Un colpo di pistola/A Pistol Shot (1942), she is the aunt of Mascia (Assia Noris), courted by both Foscho Giacchetti and Antonio Centa.

In Luigi Zampa’s C’è sempre un ma!/There Is Always a But! (1943), Dalma plays one of two mothers who lead a party life and need to be brought back to earth (that is: petty bourgeois morals, crowned my marriage) by their daughters, played by Carla Del Poggio and Adriana Benetti. While shooting in 1942 took six months and distribution also dragged on, the film came out in 1943 in a moment the average Italian was not in the mood of a Hollywood-like script in which children need to re-educate their parents after the Roaring Twenties. 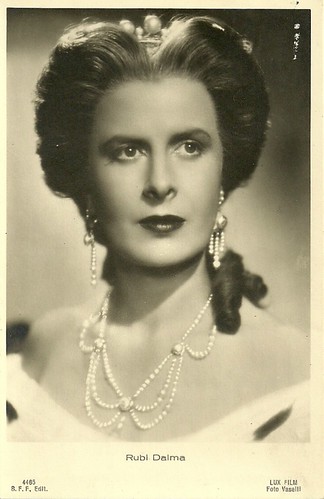 
During her career, Rubi Dalma was directed in various films and stage plays by such directors as Gennaro Righelli, Mario Camerini, Enrico Guazzoni, Luigi Zampa and Michelangelo Antonioni. Dalma participated for instance in the historical production Enrico Meucci (Enrico Guazzoni, 1940), a biopic of the homonymous inventor, starring Luigi Pavese.

After the war she mainly played character parts. Among her last roles was that of the countess Teneroni in Augusto Genina’s Cielo sulla palude/Heaven over the Marshes (1949), on the young Christian martyr Maria Goretti (played by Ines Orsini), and masterfully cinematographed by Aldo Graziati.

Another late part was that of the snob friend of Paola (Lucia Bosè) in Michelangelo Antonioni’s Cronaca di un amore/Story of a Love Affair (1950).

Dalma’s last part was, again, that of a countess in Claudio Gora’s Febbre di vivere/Eager to Live (1953), on the young spendthrift and gambling snob Massimo (Massimo Serato), who betrays his beloved Elena (Anna Maria Ferrero) and wants her to abort their child, while his friend Daniele (Marcelllo Mastroianni), released from prison, discovers Massimo was responsible for his imprisonment. Things go from bad to worse with Massimo.

After this film, Dalma decided to finish her career as actress. At the age of 88, Rubi Dalma died in 1994 in Castel Gandolfo near Rome.