German actor Carl Clewing (1884-1954) was also an opera singer, the composer of the song Alle Tage ist kein Sonntag (Every Day Isn't Sunday) and a music professor in Berlin. During the years of the early cinema he was much in demand as film actor. 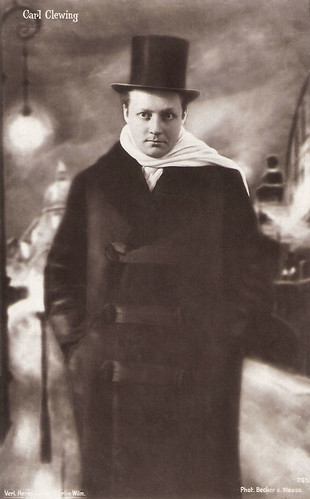 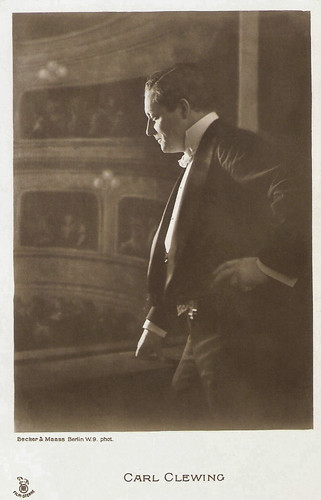 
Theodor Rudolph Carl Clewing was born in 1884 in Schwerin, Germany. His father was the owner of an apothecary.

Clewing studied in Prague. From 1909 he was an actor in Berlin and he was appointed Royal Court actor in 1911.

In the next years followed roles in productions like Ein Sommernachtstraum in unserer Zeit (Stellan Rye, 1913) based on motives of William Shakespeare’s A Midsummer Night's Dream, the fantasy Der Ring des schwedischen Reiters/The ring of the Swedish riders (Stellan Rye, 1913), and Der Flug in die Sonne/The flight into the sun (Stellan Rye, 1914).

At the outbreak of the First World War, he announced himself voluntarily, and during the war he was repeatedly distinguished and promoted to lieutenant.

After the war, he was again active in Berlin as an opera singer, but also as a film actor. Among his films were the crime drama Whitechapel (Ewald André Dupont 1920) with Hans Mierendorff and Grit Hagasa, and Ernst Lubitsch’s classic Sumurun (1920), in which Ewing played the young Sheik.

In the autumn of 1922, he had an engagement as 'Heldentenor' at the Staatsoper Berlin. In 1924-1925 he performed at the Bayreuth Festival and sang Walter von Stolzing and the Parsifal.

In 1922 he became a guest lecturer and professor at the State Conservatory of the Hochschule für Staats- & Wirtschaftswissenschaften in Detmold. In December 1928 he was appointed extraordinary professor for singing, vocal training and practical phonetics at the University of Music in Vienna. 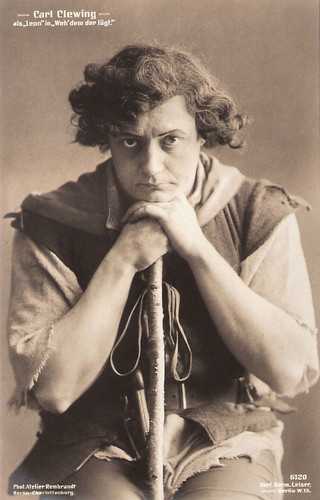 German postcard by Verlag Herm. Leiser, no. 6120. Photo: Atelier Rembrandt, Berlin-Charlottenburg. Publicity still for a stage production of Weh dem, der lügt! by Franz Grillparzer with Carl Clewing in the role of Leon, the kitchen help. 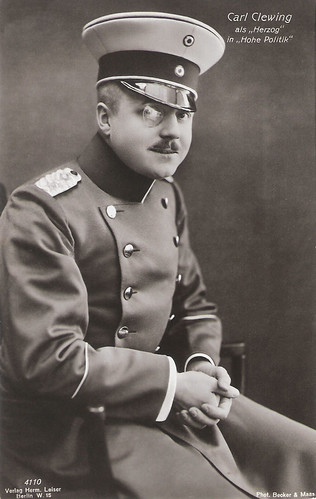 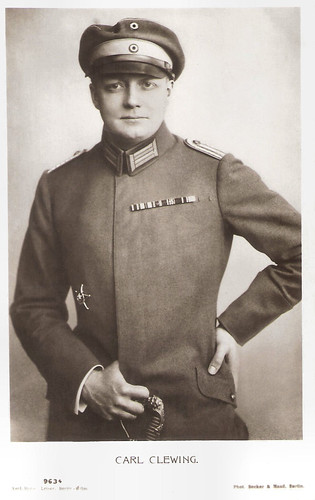 A member of the NSDAP, the SA, and the SS


At the beginning of 1931 Carl Clewing moved back to Germany and was appointed professor at the Staatliche Hochschule für Musik in Berlin, and at the same time he was a representative of the Cooperative of German Stage Artists in the School of the German Stage Society, as well as a member of the Berlin Opera and Opera, and moved to Berlin-Lichterfelde-Ost.

After Adolf Hitler's rise to power, Clewing was a member of the NSDAP, the SA, and the SS. However, he was expelled in 1934, because he had concealed his ‘non-Aryan slippage’ and his former affiliation to a Masonic lodge.

In the second half of the 1930s, Clewing, who was also a passionate hunter and collector of hunting culture, was entrusted by Hermann Göring, who was the 'Reichsjägermeister', to issue the series of monuments of German hunting culture. The first volume appeared as early as 1937, as well as a folk edition of 100 huntsmen and a songbook of the Luftwaffe.

During this time he also developed a small form of the Fürst-Pless-Horn, which is also called 'Clewingsches Taschenjagdhorn'.

In May 1939 he returned as an opera singer. In the same year, he wrote a cantata on the birth of Edda Goering.

After the Second World War he lived in the sanatorium in Glotterbad near Freiburg im Breisgau and spent his retirement in the health resort Dr. Saller in Badenweiler. Carl Clewing passed away in Badenweiler, Baden-Württemberg, Germany in 1954. 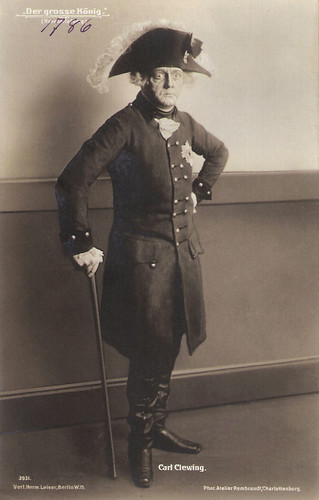 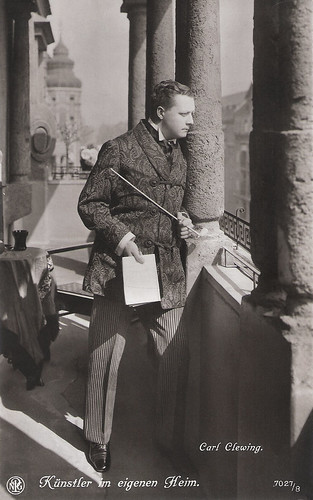