On 8 July 2017, glamorous Italian actress and former fashion model Elsa Martinelli (1935) has died. She showed her beautiful curves in many European and Hollywood productions of the 1950s and 1960s, but somehow she never became the star she was destined to become in the mid-1950s. Martinelli was 82. 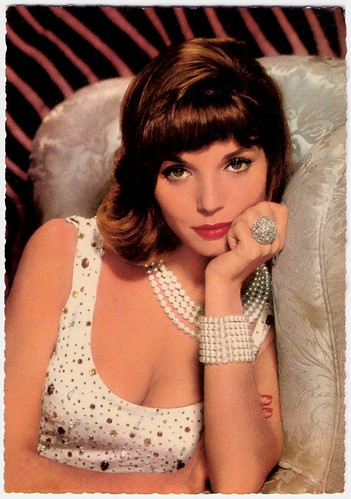 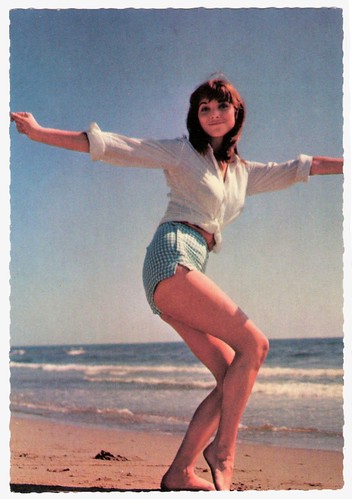 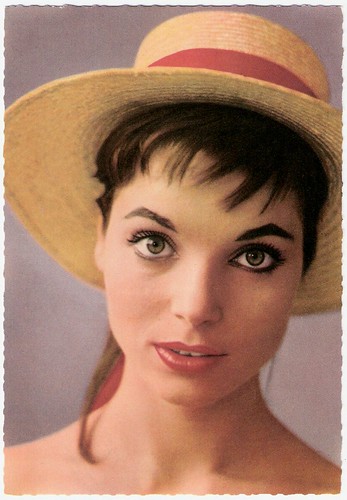 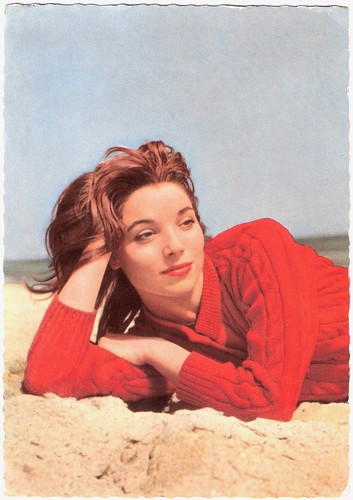 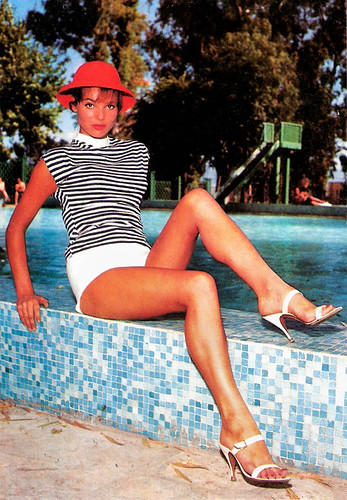 Spanish postcard by Postal Oscarcolor, no. 407. 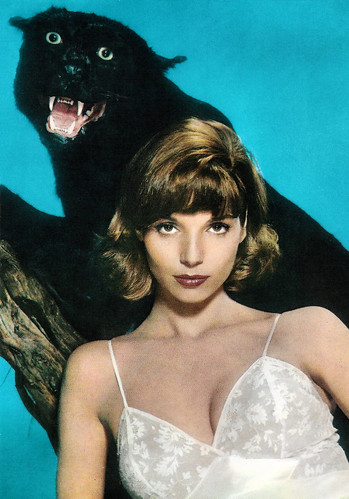 The World of Fashion

Elsa Martinelli was born Elsa Tia in Grosseto, Tuscany, in 1935. Soon after her birth, her large and very poor family moved to Rome. Elsa had to earn her keep from the age of twelve, delivering groceries.

In 1953, while working as a barmaid, she was discovered by designer Roberto Capucci who introduced her to the fashion world. She became a model and began playing small roles in films.

Her first important film role came the following year with the American Western The Indian Fighter (André De Toth, 1955), in which she played the Native American heroine opposite Kirk Douglas. Douglas claims to have spotted her on a Life magazine cover and hired her for his production company, Bryna Productions.

She returned to Rome and starred in the Carlo Ponti production La risaia/Rice Girl (Raffaello Matarazzo, 1956) with Folco Lulli and Rik Battaglia. The melodrama was an obvious attempt to recapture the success of Riso Amaro/Bitter Rice (Giuseppe De Santis, 1949) with Silvana Mangano as the sexy rice field worker in hot pants. The attempt worked quite well. 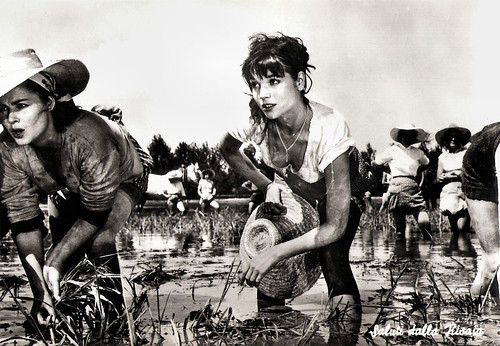 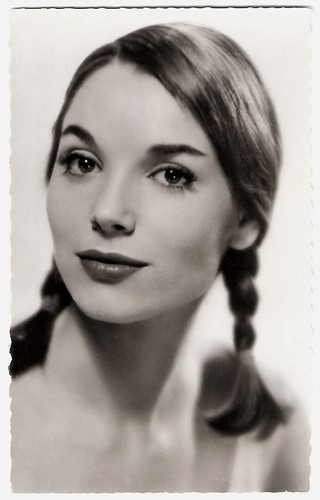 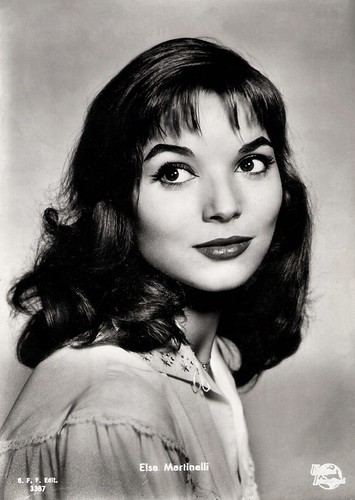 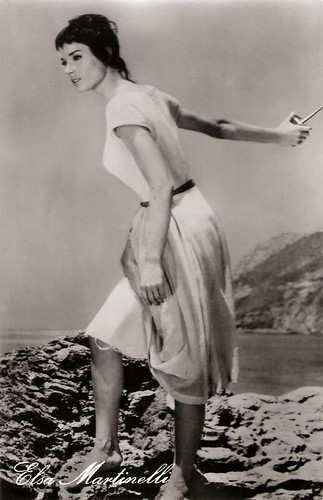 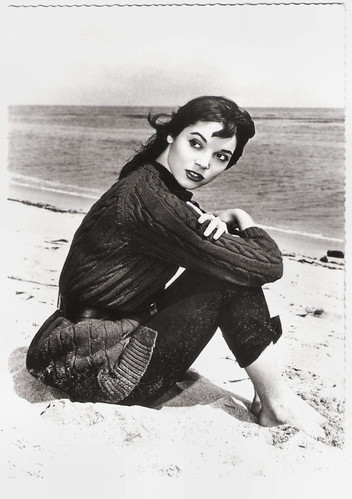 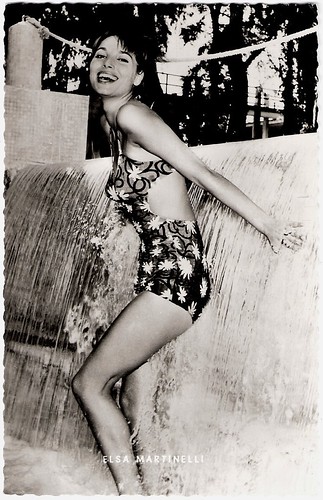 In 1956 Elsa Martinelli won the Silver Berlin Bear for Best Actress at the Berlin International Film Festival. She won this prestigious award for playing a modern Cinderella in the comedy Donatella (Mario Monicelli, 1956) with Gabriele Ferzetti.

From then on, she divided her time between Europe and the US and appeared in such films as Four Girls in Town (Jack Sher, 1956) with George Nader, Manuela/The Stowaway Girl (Guy Hamilton, 1957) with Trevor Howard, the historical drama I Battellieri del Volga/Prisoner of the Volga (Victor Tourjansky, 1959) with John Derek and the romance Un amore a Roma/Love in Rome (Dino Risi, 1960).

Highlights were the excellent drama La notte brava (Mauro Bolognini, 1959), based on a novel by Pier Paolo Pasolini and the haunting and surreal horror film Et mourir de plaisir/Blood and Roses (Roger Vadim, 1960). 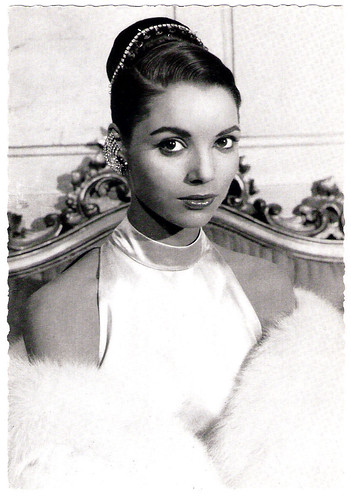 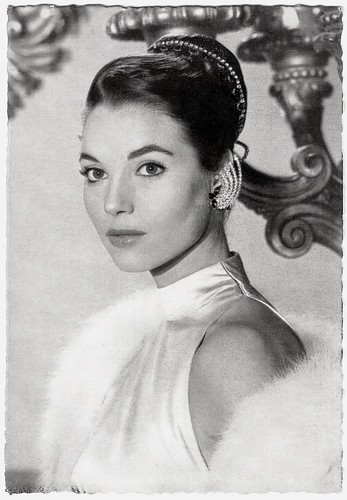 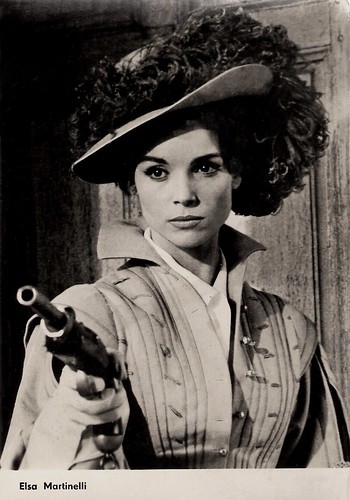 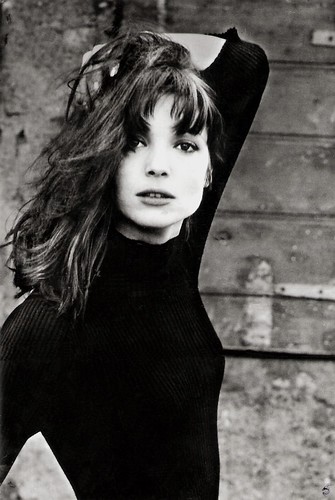 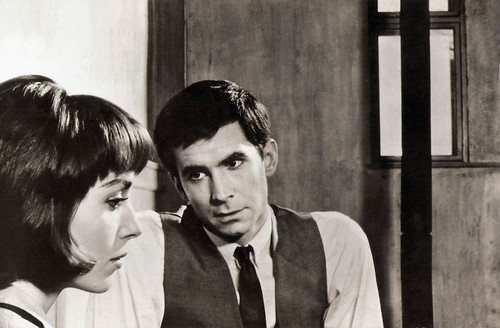 One of Elsa Martinelli’s most interesting films is Orson Welles’ adaptation of Franz Kafka's The Trial, Le Procès (Orson Welles, 1962). Anthony Perkins played Joseph K, a man condemned for an unnamed crime in an unnamed country. Seeking justice, he is sucked into a labyrinth of bureaucracy. Along the way, he becomes involved with three women - Jeanne Moreau, Romy Schneider and Martinelli - who in their own individual ways are functions of the System that persecutes him.

In the action and adventure comedy Hatari! (Howard Hawks, 1962) she played a freelance wildlife photographer on a Tanganyika game farm. Martinelli was the eye candy in a star cast with John Wayne, Gérard Blain, Red Buttons and Hardy Krüger. Hal Erickson at AllMovie: "Wayne's men-only contingent is reduced to jello when Elsa enters the scene, but in tried and true Howard Hawks fashion, she quickly becomes ‘one of the guys’."

In the comedy The Pigeon That Took Rome (Melville Shavelson, 1962) she starred opposite Charlton Heston, and in The V.I.P.’s (Anthony Asquith, 1963) she was the protegee of Orson Welles. 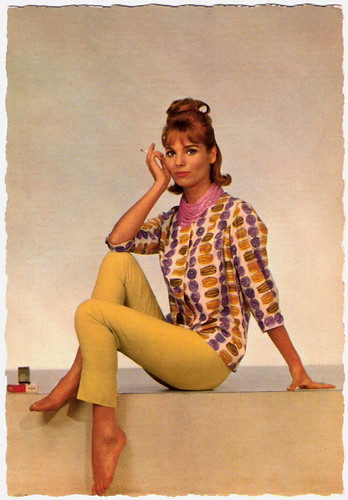 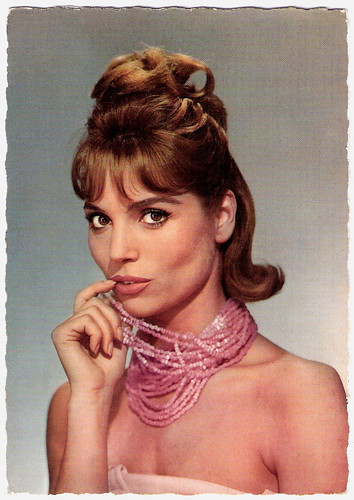 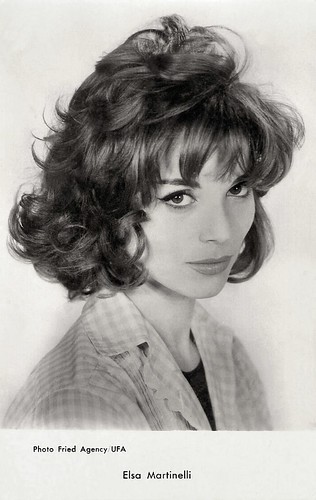 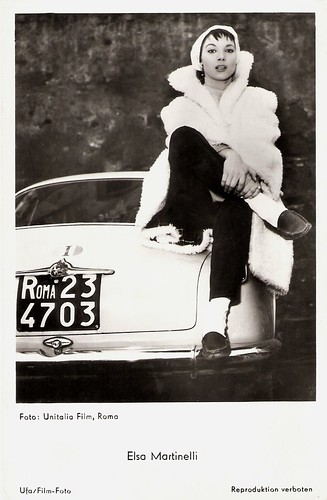 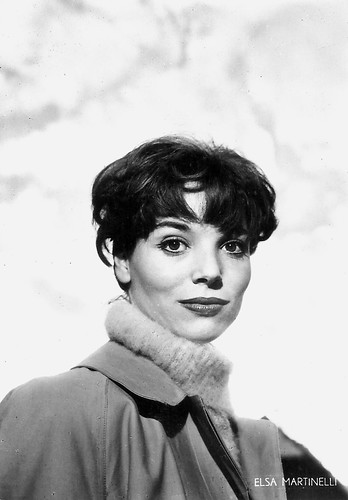 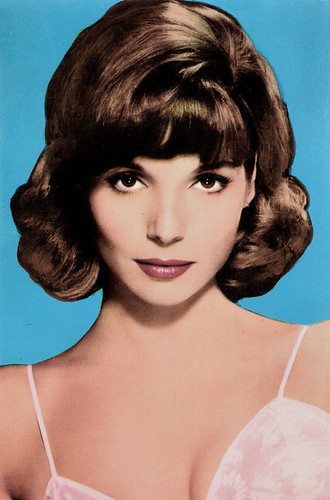 In the 1970s the film career of Elsa Martinelli somehow halted. She only appeared incidentally in European films. She starred opposite Robert Hossein in the French caper film La Part des Lions/The Lions' Share (Jean Larriaga, 1971), and she played a supporting part in the political drama Garofano Rosso/The Red Carnation (Luigi Faccini, 1976) with Marina Berti.

On TV she appeared as a guest star in The Return of the Saint (1979) with Ian Ogilvy as Simon Templar. Meanwhile she had started a new, successful career as an interior designer, but she continued to accept incidental parts in films and TV-series.

After Sono Un Fenomeno Paranormale/I'm a Paranormal Phenomenon (Sergio Corbucci, 1985) with Alberto Sordi, she made unheralded return appearances in the international productions Arrivederci Roma (Clive Donner, 1990) and the inconsequential all-star comedy Once Upon a Crime (Eugene Levy, 1992).

Elsa Martinelli was married from 1957 till 1964 to Count Franco Mancinelli Scotti di San Vito, by whom she has a daughter, actress Cristiana Mancinelli (1958). In 1968 she married Paris Match photographer and 1970s furniture designer Willy Rizzo, with whom she had a son.

The Vicar of VHS said...

Gorgeous! I'm going to seek out some of her horror/thrillers, I think. What an open, honest gaze in that second pic.