German singer, dancer and actress Evelyn Künneke (1921-2001) was the last survivor of the Lili Marleen generation. Although the Nazis did not like it, she brought tap dance and swing to Germany in the 1930s and 1940s. Thirty years later she made a come-back in the films of Rosa von Praunheim and Rainer Werner Fassbinder. 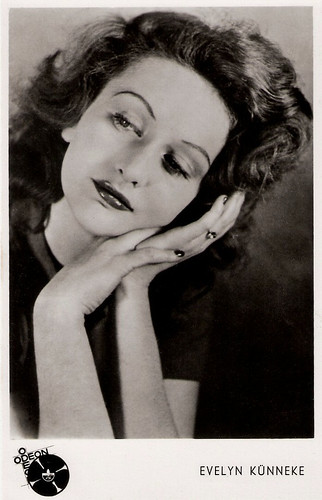 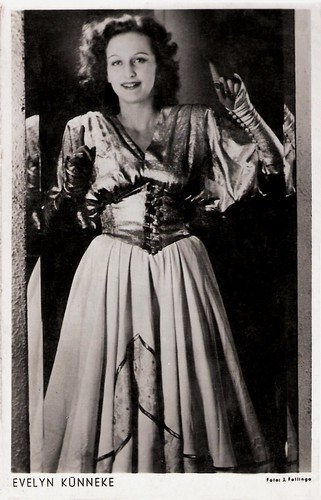 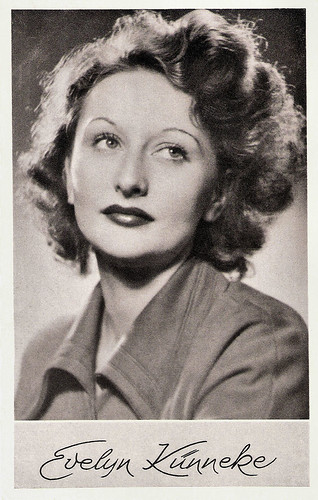 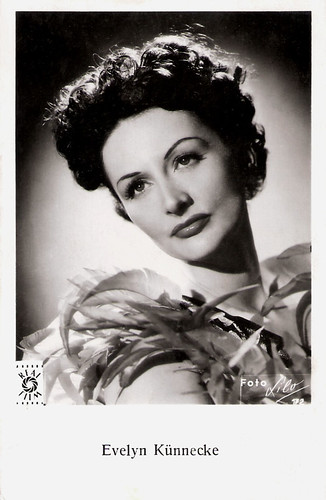 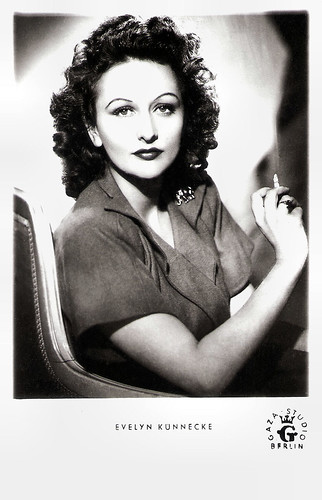 
Eva-Susanne Künneke was born in Berlin in 1921. She was the daughter of famous operetta composer Eduard Künneke and his wife, the opera singer Katarina Garden (born as Katarina Krapotkin), and she spent her youth very much in the shadow of her father's fame.

Despite the fact that he thought little of his daughter’s artistic talents and despite her being, in her own opinion, "knock-kneed, short-sighted, far too tall, and unable to escape my father's shadow", her ambitions proved irrepressible. She was a swimming champion at 14. She had ballet classes from the Russian choreograph Victor Gsovsky, acting classes from Ilka Grüning, Lucie Höflich and Leslie Howard, and singing lessons from Maria Ivogün. Meanwhile she worked as a photo model.

In Stepstudio Edmont Leslie, she learned to tap dance. In 1935 she acquired the O-level at the Fleckschen private school in Berlin. After completing her education, she became second solo dancer of the Berlin Staatsoper (State Opera), but she made a splash as the tap dancer Evelyn King in Berlin cabarets and variety shows. Only seventeen year old, she toured through Europe as the star of the Scala revue Etwas verrückt (Something Crazy), and that same year she founded together with Horst Matthiesen her own dance studio in Berlin.

A year later, her performances were forbidden by the Nazi regime. After this Berufsverbot she began a career as a singer under the name of Evelyn Künneke. She worked with renowned composers such as Peter Igelhoff and Michael Jary. She also became a starlet at the film studios of the Ufa, where she had her breakthrough in Auf Wiedersehn, Franziska/Goodbye, Franziska (Helmut Käutner, 1941) featuring Marianne Hoppe. In this film she sang Sing, nachtigall, sing (Sing, nightingale, sing), the second most popular hit of wartime Germany after Lale Andersen's Lili Marleen.

Two years later followed an appearance in the film musical Karneval der Liebe/Carnival of Love (Paul Martin, 1943) starring Johannes Heesters. She made frequent tours during the war to support the troops. From 1942 to 1944, she appeared on the eastern front, and in early 1944 also at the western front.

Evelyn Künneke’s hits such as Haben Sie schon mal im Dunkeln geküßt? (Have you ever kissed in the dark?) were unmistakably influenced by the Swing. The American swing music was politically frowned upon in Nazi-Germany and at the time, no other German singer dared to sing Künneke’s kind of songs.

In 1944 she was arrested and accused of defeatism because of her unfavourable observations of the progress of the war and in January 1945 she was put in jail in the Berlin-Tegel prison. It was only the reported intercession of filmmaker Leni Riefenstahl - a personal friend of Adolf Hitler and perhaps the most influential artistic figure in his circle of acquaintances - that prevented worse from happening to her and her family.

Shortly before the end of the war, she was released to sing anti-American Swing songs together with the secret propaganda band Charlie and His Orchestra. The end of the war was the reason she did not have to do this. 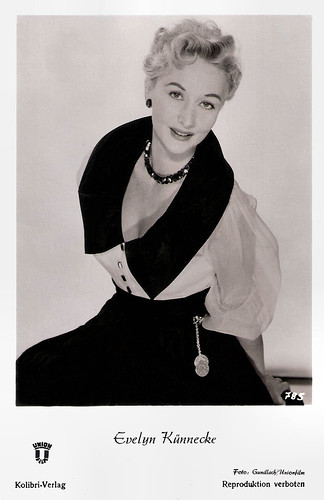 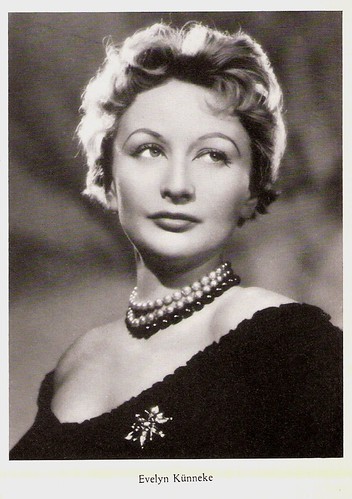 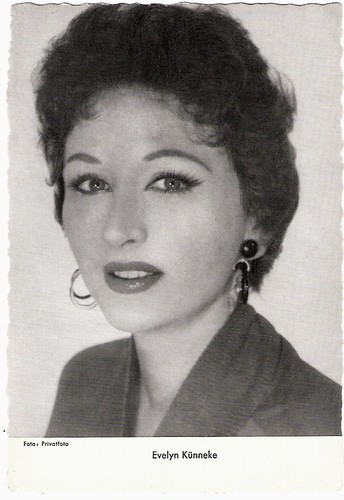 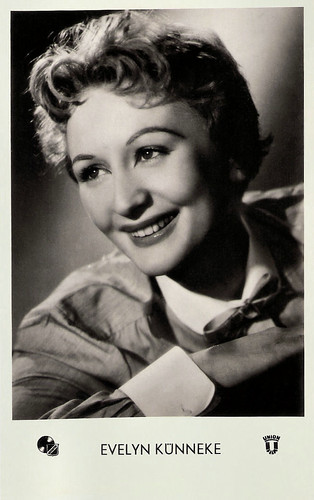 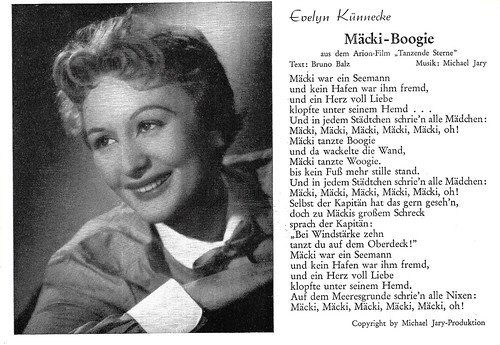 Callas of the Subculture


After the war Evelyn Künneke had a few more successful years as a pop singer, first in 1945 with the Show-Orchestra Walter Jenson in Hamburg. Among her hits were Winke-winke (Bye-bye), Allerdings – sprach die Sphinx (However – said the Sphinx) and Egon.

As a singer she appeared in such films as Heimliches Rendezvous/Secret rendezvous (Kurt Hoffmann, 1949) with Hertha Feiler, Die Dritte von rechts/Third from the Right (Géza von Cziffra, 1950) and Die verschleierte Maja/The Veiled Lady (Géza von Cziffra, 1951) with Maria Litto. She played her biggest role till then in Verlorene Melodie/Vanished Melody (Eduard von Borsody, 1952) as an American jazz singer.

She appeared with real swing music in jazz clubs all over Europe. In 1953 she did a tour through the US. Three years later, she celebrated her only hit in the German hit parade, which was only just introduced in 1955: her German-language version of Hernando's Hideaway which reached the 8th place. In 1958 she appeared in the German preliminaries of the Eurovision Song Contest.

In the late 1950s and 1960s, her star faded, and several attempts to establish herself again, failed. In the mid-1970s, Künneke celebrated her big comeback as an actress in the films by the new wave of German directors.

Künneke could also be seen with David Bowie in Schöner Gigolo, armer Gigolo/Just a Gigolo (David Hemmings, 1978). In total the ‘Callas of the subculture’ would appear in 45 films. Among her later films are the Thomas Mann adaptation Der Zauberberg/The Magic Mountain (Hans W. Geissendörfer, 1982) with Rod Steiger, Neurosia - 50 Jahre pervers/Neurosia (Rosa von Praunheim, 1995) - the autobiography of the director, and the horror comedy Kondom des Grauens/Killer Condom (Martin Walz, 1996), based on the comic book by Ralph König.

Till at a very old age, she popped us as a chanteuse in the Berlin scene, often together with Brigitte Mira and Helen Vita as Drei Alte Schachteln (Three old hags). In their popular revue ‘the three last survivors of the Lili Marleen generation’ promoted themselves saying: “Was wollt ihr mit drei knödelnden Tenören, hier habt ihr drei echte Berliner Gören” (What do you need three dumpling tenors for, here you have three real Berlin gals). The three singers had a combined age of just about 240 years, they gleefully informed the public at their sell-out performances.

In 2001, Evelyn Künneke died of lung cancer in her hometown Berlin. She was 79. Künneke had first been married to an Englishman, the father of her daughter. Her second husband was the business school graduate Reinhard Thomanek from 1963 to 1972. Her third marriage was in 1979 with her manager Dieter Hatje. In 2000 she was honoured with the Goldenen Kamera for her long career. 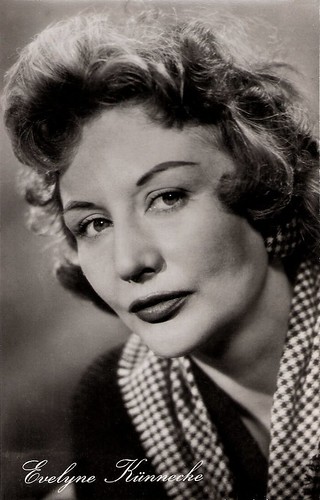 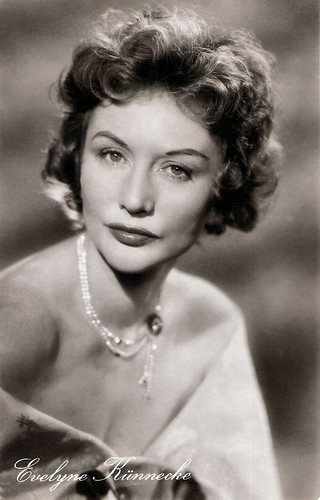 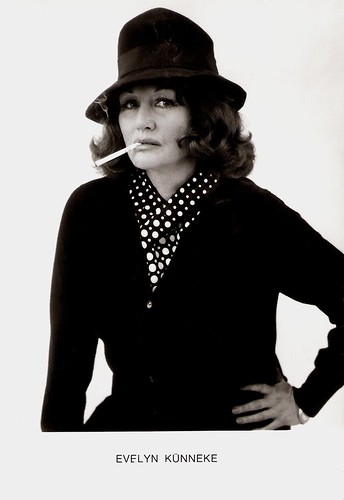 
Evelyn Künneke step-dances in Karneval der Liebe/Carnival of Love (1943). Propaganda Minister Joseph Goebbels declared that this dance sequence was 'Ungerman and not good for moral'. So the scene was cut from the film and and a new sequence with Johannes Heesters and Dorit Kreysler singing Junger Mann was filmed. In the past both film versions were broadcasted on German TV. The last 10 years only the version with Evelyn's dance has been shown. Source: Alparfan (YouTube).