Beautiful, British Miriam 'Mimi' Jordan (1904-1987) enjoyed a brief career in Hollywood as a leading lady during the early 1930s. Her best known films are Sherlock Holmes (1932) and I Loved You Wednesday (1933), but most of her work was confined to the stage. 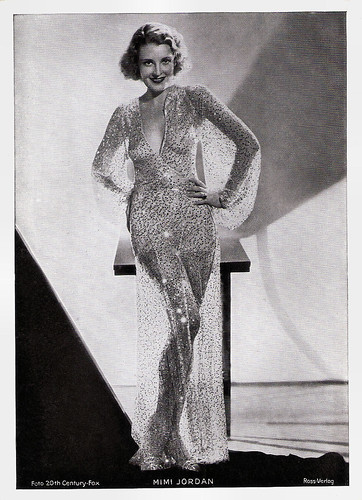 
Miriam Jordan, also known as Mimi Jordan, was born in 1904, in London, England, UK. She won a beauty contest while working as a typist in London and this facilitated her introduction to the stage.

Seeking fame and fortune in America, she was 'decoratively cast' in the musical comedy Three Cheers (1928) with Will Rogers at the Globe Theatre at Broadway. Her one scene consisted of walking down stairs, while modelling a fabulous gown.

In 1931, she made her real Broadway debut in the drama Cynara, written by H.M. Harwood and R.F. Gore-Brown.

Between 1932 and 1934, she appeared in a handful of Hollywood films for 20th Century Fox. She co-starred with fading star Warner Baxter in her film debut, the Science Fiction drama 6 Hours to Live (William Dieterle, 1932) and again in Dangerously Yours (Frank Tuttle, 1933).

Miriam's best moment was to be the romance I Loved You Wednesday (Henry King, William Cameron Menzies, 1933) in which she was billed fourth (after Warner Baxter again, Elissa Landi and Victor Jory) in the part of Cynthia Williams. Mordaunt Hall in The New York Times called the film "an unusually handsome and interesting picture" and Miriam "charming"and her performance "splendid".

However, after the romantic comedy Two Heads on a Pillow (William Nigh, 1934) opposite Neil Hamilton, her days as a leading lady were over. Jordan later only returned in a bit part in My Own True Love (Compton Bennett, 1948). On Broadway, she appeared in 1938 in a short-lived run of Michael Drops In.

Miriam Jordan passed away in 1987, in Great Worley, England, UK.