Italian silent film actor and director Gustavo Serena (1882-1970) is now best remembered as diva Francesca Bertini's co-star, but he did much more than that. 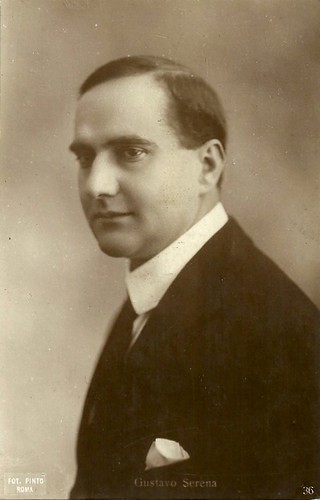 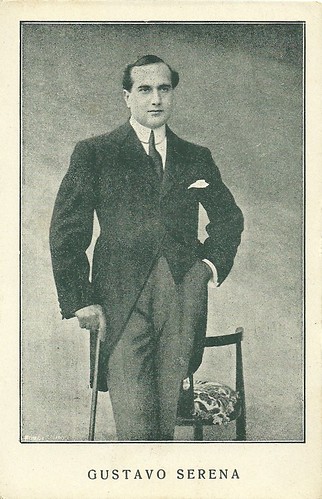 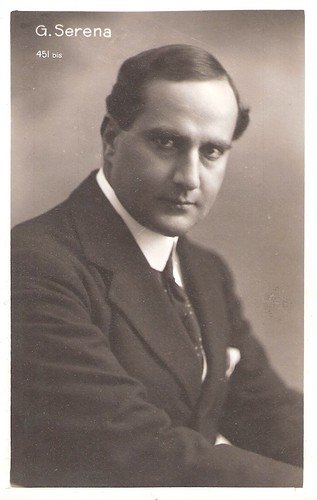 
Gustavo Serena was born into a wealthy Neapolitan aristocratic family in 1881 or 1882. He left his military career for the stage.

In 1909, he switched to the cinema. He made his film debut in the Cines production Bianca Cappello/White Chapel (1909), a period piece by Mario Caserini.

Then, Serena and Bertini both moved to the Cines company, though they did not play together there. At Cines, Serena also started to direct films.

In 1913, he had a major breakthrough as Petronius in the epic Cines film Quo vadis? (Enrico Guazzoni, 1913). The film became a worldwide success and was arguably the first blockbuster in the history of cinema, with 5,000 extras, lavish sets, and a running time of two hours, setting the standard for 'superspectacles' for decades to come.

In 1913 Serena also acted in productions by Roma Film. In 1914, he moved on to the Turinese company Pasquali, where he played in films by Umberto Paradisi and opposite actors as Maria Jacobini and Anna Petersen. In 1915, he left Pasquali and returned to Rome to work at Caesar Film, where he became not only an important actor but also a major director. 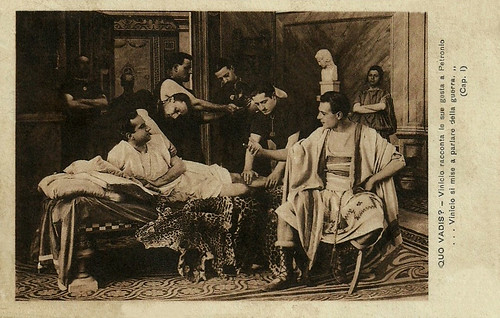 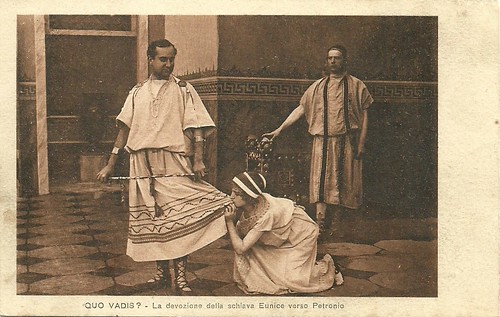 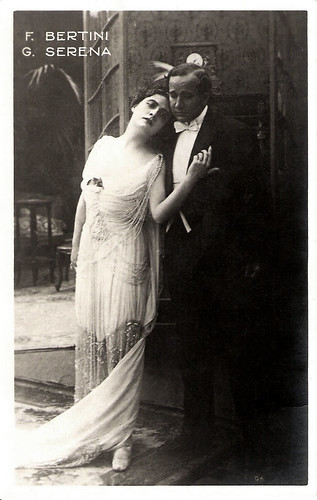 Italian postcard by Vettori. Photo: still from La signora dalle camelie/The Lady of the Camellias (Gustavo Serena, 1915), with Francesca Bertini. The film was based on Alexandre Dumas fils' classic stage play La dame aux camélias, which in its turn was the basis for Giuseppe Verdi's classic opera La traviata.


At Caesar, Gustavo Serena directed various films with Francesca Bertini. In the meantime, she had become an adored film star, a 'diva'.

The first of the films of Serena with Bertini was a classic precursor of neorealism, Assunta Spina (Gustavo Serena, 1915), based on a Neapolitan stage play by Salvatore Di Giacomo.

Wikipedia: "One of the aims of creating this film was to reveal the subtle expressive power of filmmaking, compared to theatrical plays. Francesca Bertini' fully displayed her talent for the first time, setting a new standard for acting on the silver screen. Her performance is generally rated as extraordinary, and in polar opposition to the work of writer and dramatist Gabriele D'Annunzio who was very popular at the time."

Today, Serena's direction of the film is discussed; some historians maintain that Bertini directed a part of or even the whole film.

At Caesar, Serena played the lead opposite Bertini in 11 feature films. Of these, he both directed and played in Assunta Spina (1915), Diana l'affascinatrice/Diana, the Adventuress (1915), Ivonne la bella danzatrice/Yvonne, the Beautiful Dancer (1915), Il capestro degli Asburgo/The Rope of Habsburg (1915), and La signora dalle camelie/The Lady of the Camelias (1915).

In 1916, Giuseppe De Liguoro took over the direction of the Bertini-Serena films, including Odette (1916) and Fedora (1916). The following year, Serena again both directed and acted in Andreina (1917). After that, Alfredo De Antoni took over  and he directed the golden couple Bertini-Serena in such successes as Il processo Clémenceau/The Clemenceau Affair (1917), Tosca (1918) and Frou-Frou (1918).

When Bertini starred in seven films based on the 7 mortal sins, Serena played opposite her in L'ira/Anger (Edoardo Bencivenga, 1918) and L'avarizia/Greed (Gustavo Serena, 1919). These were their last collaborations. Then Gustavo Serena was replaced as Francesca Bertini's co-star by actors such as Livio Pavanelli, Sandro Salvini and Mario Parpagnoli. 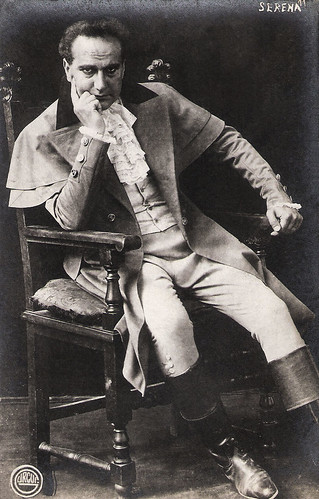 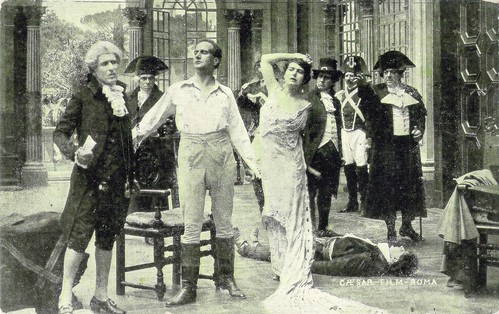 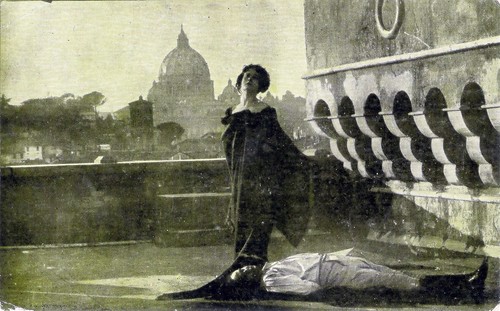 Spanish postcard by Amattler Marca Luna, series 5, no. 18. Photo: Caesar Film. Publicity still for Tosca (Alfredo De Antoni, 1918), starring Francesca Bertini as Floria Tosca and Gustavo Serena as Mario Cavaradossi. The execution of Cavaradossi on the roof of the Castel Sant' Angelo, with St Peter's cupola in the distance. Tosca discovers Scarpia's (Alfredo De Antoni) betrayal. She herself has just stabbed Scarpia to death. When Scarpia's men try to arrest her, she jumps of the roof with the words: "O Scarpia, davanti a Dio!"


While not making films with Bertini anymore, Gustavo Serena continued to direct films at Caesar, with actors from its regular troupe, such as Carlo and Olga Benetti.

Among these films were A San Francisco (1915), based on another play by Di Giacomo; Parigi misteriosa/Mysterious Paris (1917), based on Eugene Sue's novel Les mystères de Paris, and Fernanda (1917), starring Leda Gys. He often played in these films too. Serena continued to direct films up to 1923, often with the actresses Anna Fougez, Tilde Kassay and Nella Serravezza.

When sound film came to Italy, Serena made a handful films, based on regional theater, such as Zappatore (1930), in which he played the lead himself. He quitted directing after that, but continued to play minor roles in Italian sound films in the late 1930s.

During the war years, Serena was production manager for a few films. Again from the late 1940s and all through the 1950s, he acted in several films, though in small parts. His last roles were even uncredited: bit parts in I soliti ignoti/Big Deal on Madonna Street (Mario Monicelli, 1959) and Don Camillo monsignore ma non troppo/Don Camillo: Monsignor (Carmine Gallone, 1961). 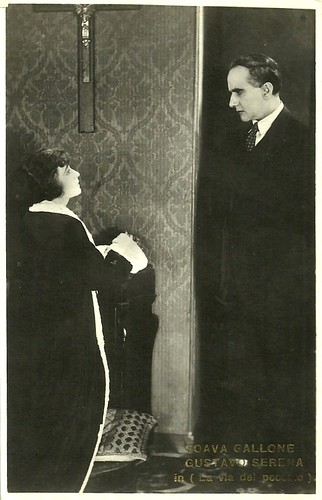 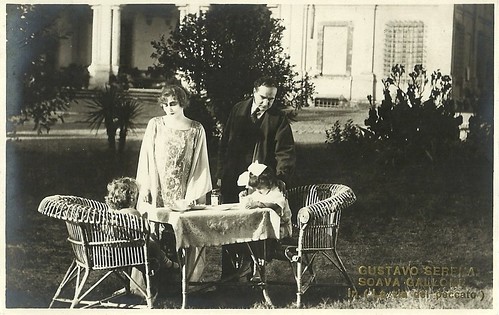