Entrancing, luscious-lipped Michèle Mercier (1939) worked with such famous directors as François Truffaut, Jean-Pierre Melville, and Mario Monicelli. And although she appeared in more than fifty films she will always be best known as seductive Angélique, ‘the Marquise of the Angels’. This star making role proved to be a blessing but also a curse. 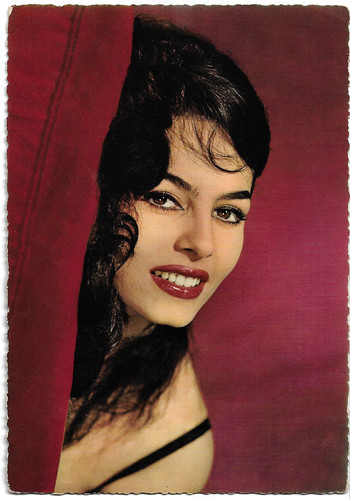 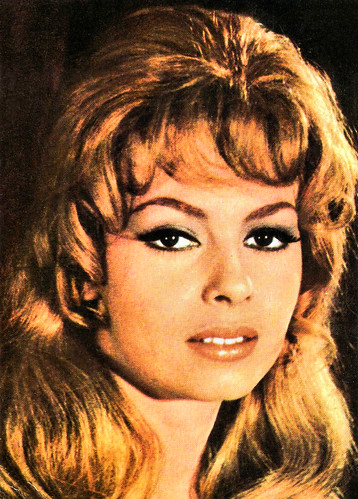 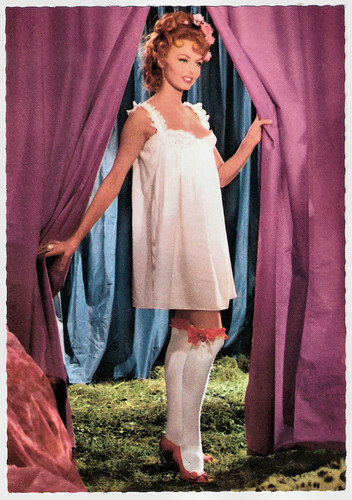 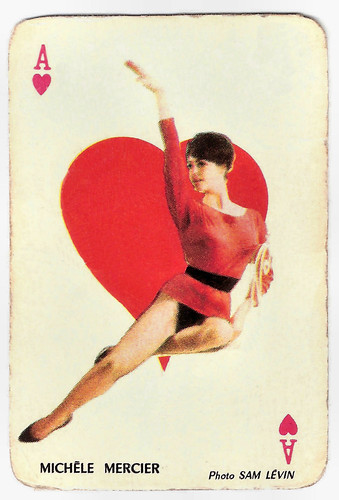 
Michèle Mercier was born as Jocelyne Yvonne Renée Mercier in Nice (France) in 1939, the oldest daughter of a French pharmacist father and an Italian mother.

She initially wanted to be a dancer. She studied dancing and at 8 years she became a 'petit rat' (little chorus girl) at the Opera de Nice.

At 15, she played a small part in the film J'avais sept filles/I Have Seven Daughters (Jean Boyer, 1954) starring Maurice Chevalier, who predicted her a successful career.

At 17, she moved to Paris, and studied dance with the company Ballets de la tour Eiffel under the direction of Roland Petit. At the same time she followed drama classes with Solange Sicard. After a stay in London, she had her debut in the theatre.

When she went to her parents for a holiday, she met director Denys de La Patellière, who was filming Retour de manivelle/There's Always a Price Tag (1957) in Nice. He gave her a role – as the chambermaid Jeanne.

Her birth name seemed too long and old-fashioned for a film career, so she adopted the name Michèle. This was the name of her younger sister, who had died at the age of five from typhoid fever, and also of the star of Retour de manivelle, the great actress Michèle Morgan. 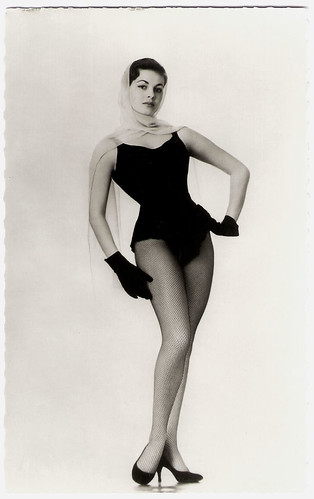 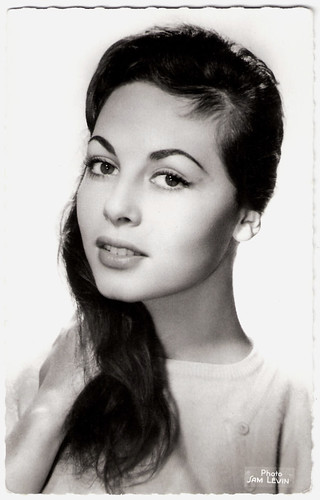 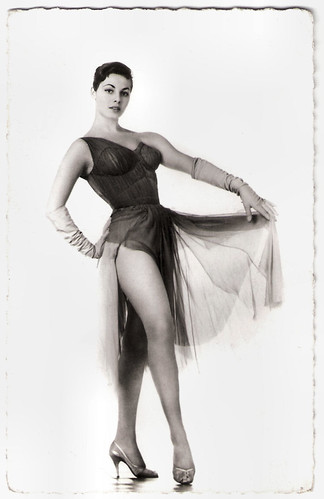 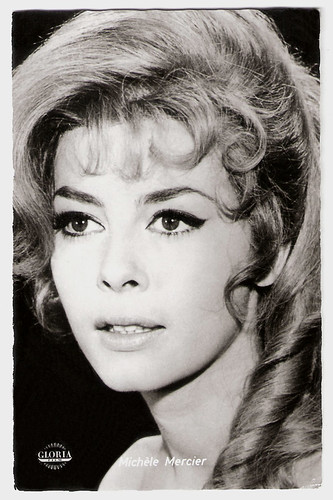 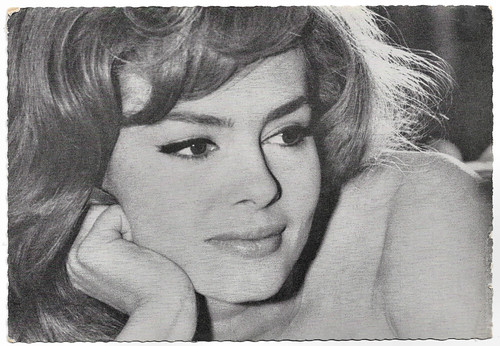 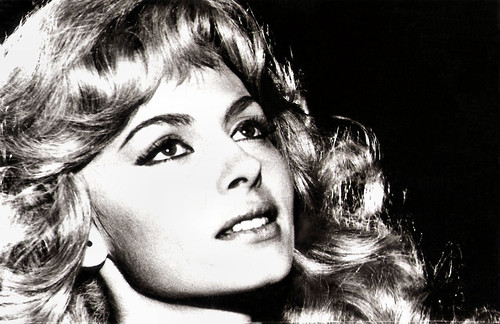 
Michèle Mercier was noticed by Léonide Moguy, who offered her the leading part in his film Donnez-moi ma chance/Give Me My Chance (1958).

Robert Lamoureux made her the leading lady of La brune que voilà/There Is the Brunette – both in the theatre (1958) and on screen (1960). In 1959 she was invited to go to Hollywood but she quickly returned to Europe and became a star in Italy.

In Tirez sur le pianist/Shoot the Pianist (François Truffaut, 1960) she played the part of a prostitute next to Charles Aznavour. Then followed Aimez-vous Brahms/Goodbye Again (Anatole Litvak, 1961) starring Ingrid Bergman.

She sometimes worked in England, but more often in Italy. There she appeared in such films as Gli anni ruggenti/Roaring Years (Luigi Zampa, 1962), I Mostri/The Monsters (Dino Risi, 1963), and Alta infedeltà/High Infidelity (Mario Monicelli, 1964).

She also starred in two Mario Bava films: Le Meraviglie di Aladino/The Wonders of Aladdin (1961) and I tre volti della paura/The Three Faces of Fear (1963), in the sketch The Telephone. 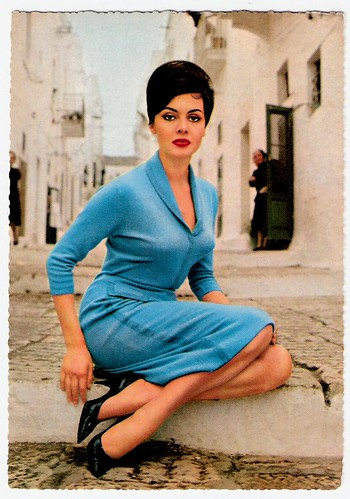 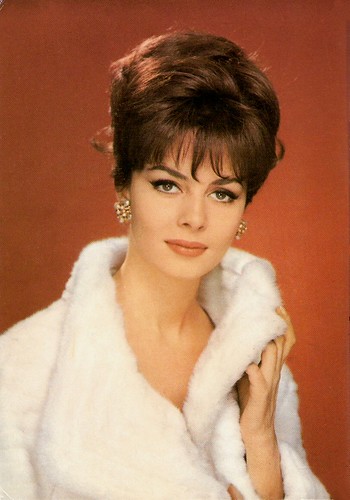 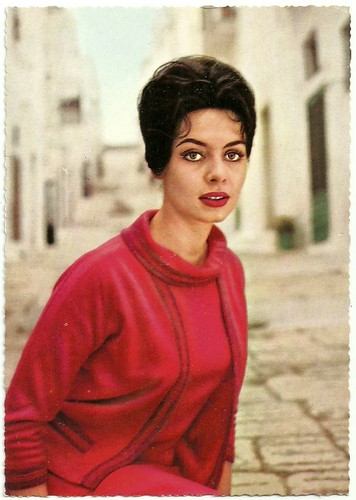 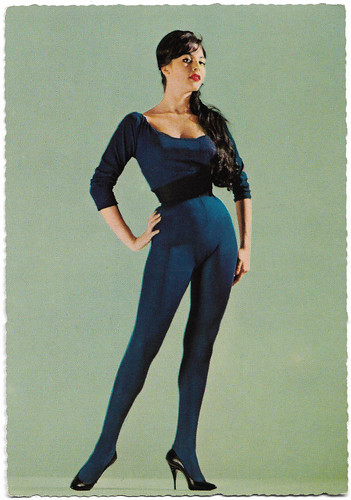 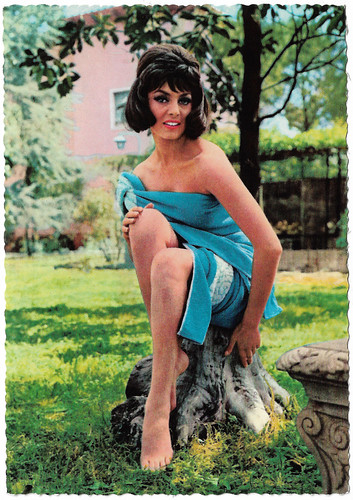 
Michèle Mercier needed a role which could make her a real star of the French cinema. In 1963 she got her chance, when producer Francis Cosne decided to make a film of the sensational novel Angélique, by Anne & Serge Golon.

Cosne considered Brigitte Bardot (refused), Annette Vadim (too unknown), Catherine Deneuve (too pale), Jane Fonda (too American), and Virna Lisi (busy in America) for the part, but the actress he most seriously considered was Marina Vlady.

Vlady almost signed a contract, but Mercier won the role after trying out for it. She did not appreciate this very much since she was being treated like a beginner at a time when she was already well-known in Italy. At the time she was contacted to play Angélique, she had already acted in over twenty films.

However the role of ‘the Marquise of the Angels’ proved to be both a blessing and a curse, as Ivar Kümnik writes at IMDb: "It catapulted her to almost instant stardom, rivalling Brigitte Bardot in celebrity and popularity", but the character of Angélique overshadowed all other aspects of her career. By the end of the 1960s, the names Angélique and Michèle Mercier were synonymous. 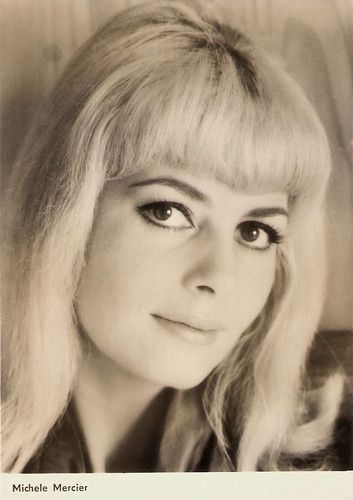 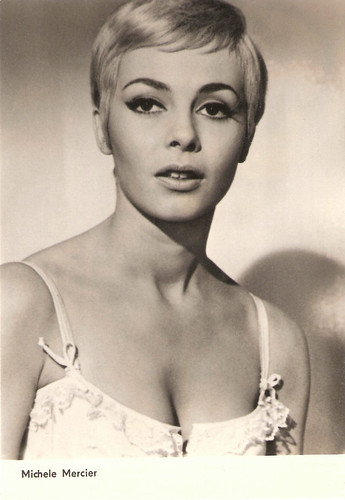 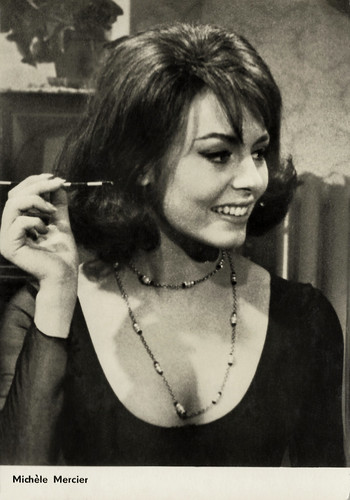 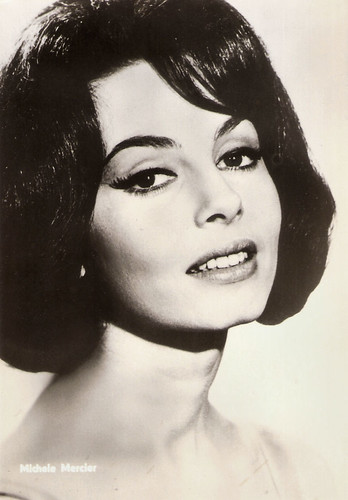 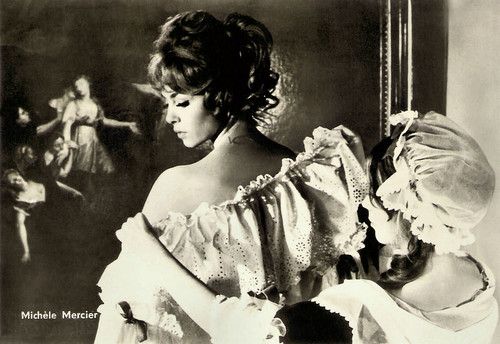 You Can't Win 'Em All

Mercier then left France and tried to re-start her career in the United States. She played in You Can't Win 'Em All (Peter Collinson, 1970) with Tony Curtis and Charles Bronson, but unfortunately it was a disaster.

Her private life was disastrous too. She married assistant-director André Smagghe in 1961. Sadly he turned out to be an alcoholic who was eventually hospitalised. They divorced in 1967. After a long relationship she married the well-known racing driver Claude Bourillot in 1970, but he disappeared one day with all her jewels and money, leaving her penniless. They divorced in 1976.

Her other relationships were also disastrous. She claimed that her co-star Vittorio Gassman once tried to rape her, and an Italian Prince N. refused to marry her after many years of courtship. She was also pursued by Bettino Craxi and Silvio Berlusconi.

In 1987 she published her autobiography Angélique a cœur perdu, prefaced by Roger Peyrefitte. She started a publishing house and in 1995, the photobook Merveilleuse Angélique was published. At the end of 1996 her second autobiography was released Angéliquement Votre. Unfortunately her business associate stole from her and she ended up with a large debt.

She confessed in the French newspaper Nice Matin: "I am ruined, I'll be obliged to sell part of my paintings, my furnitures, my properties, my jewels and the costumes of Angélique". After a 14-year interval she returned to the screen in La Rumbera (Piero Vivarelli, 1998).

She returned to the area where she was born, and lived in Cannes. In 2002 another autobiography Je ne suis pas Angélique/I am not Angélique was published.

In 2006, Michèle Mercier was decorated with the French order of Chevalier dans l'Ordre national des Arts et lettres. In his speech the Minister of the Culture reverted to her "immense popular success" in the mythical series Angélique, in which she personified a "liberated woman, sensual and strong". 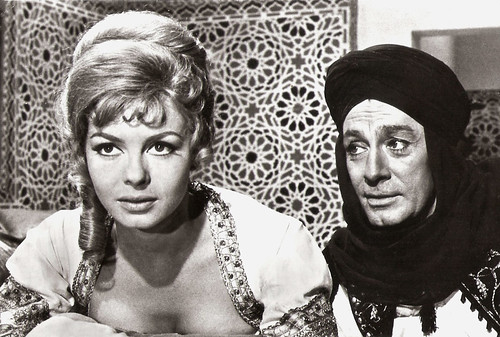 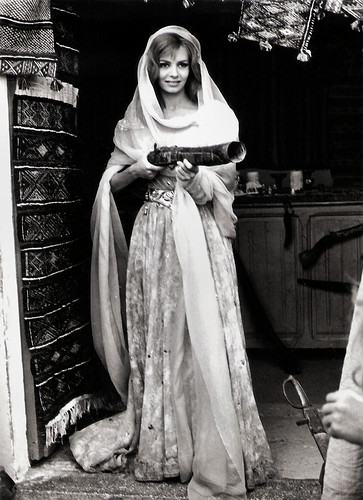 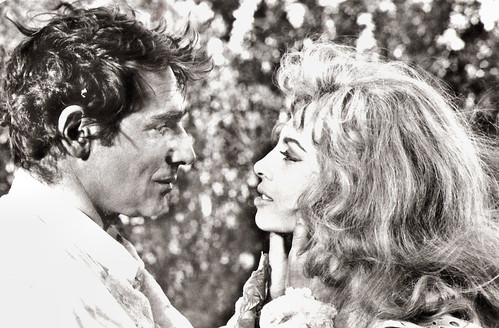 Hi Bob,
Michele certainly is beautiful. Enjoyed reading all the info on her, always fun to visit you.
thanks for sharing.
debby

Enjoyed the videos. I am always amazed at how many European Film Stars appeared on postcards.

Were these postcards from the period when the stars were popular, or are they more modern?

I had no idea that Michèle was just a screen name! Poor thing.. continually swindled, cheated ,and stolen from. She had amazing power to keep on starting from the beginning over and over! Now I want to see the film Angelique:)

What a lovely woman. I had never heard of her. Thank you for bringing her back for the rest of us to enjoy.

Howdy Bob
Happy Postcard Friendship Friday.
What a very beautiful woman but such a difficult life for one with so much talent.She really has a very strong will to keep going forward ever forward to succeed in life and I am so glad she has been honored for her work.
Thank you for sharing all the wonderful information with us to day.
Have a fabulous weekend.
Happy Trails

wow. thanks for sharing. Americans (well, me) know so little of cinema of other countries.

Dear PFF'rs, Thank you for your visit and your comments. And yes Postcardy, these are all vintage
postcards. Many have been sent by mail, others come from old fan albums. In Europe, filmstar postcards were a big thing, from the 1910's till the 1970's. Especially in Germany, France and the Netherlands many people collected them. There were specialized publishers like Ross Verlag and after the war Krüger in Germany, and in the Netherlands there used to be publishers like Takken and Spanjersberg. Spanjersberg still exists but does not publish film star postcards anymore. Does anyone know why it was not such a big thing in the USA?

You Can't Win 'Em All was an odd little movie -- strange casting, strange setting -- but overall not a bad little picture. Unfortunately Michèle Mercier's voice was overdubbed (I guess her accent was too strong for us unworldly Yanks) and every now and then there was a noticeable lack of synchronization.

Very nice! I love her earrings in the first one!

You know....I am accumulating quite a list of movies that I *must* see. :-)
....and gee what a lousy place to end that clip of Angélique....I want to know what happened.
And how about those hats in the trailer for Une veuve en. WooHoo!
As always I loved your post...and so looking forward to next Friday.
Keep them coming...and have a most beautiful weekend.

i liked this vintage video and all interesting information!Cool post!
happy PFF
xx

Hi Bob
Returning again after a break, saw your post on Deborah Kerr. My mum had a beautiful filmstar postcard collection from 1930s 1940s some cards were signed. I wonder if she has any idea of the value? (She's in her 80s.) Thank you for sharing the beautiful colour photographs of the lovely Michele

Michèle Mercier is so adorable and beautiful. Thanks for sharing the infor, photos and video of her.