Today starts the 37th edition of Le Giornate del Cinema Muto, the world’s leading international silent-film festival, located in the Italian city of Pordenone. One of the main programmes this year is a Mario Bonnard retrospective. Bonnard, aka Mario Bonard (1889-1965), was an Italian actor and director, whose career span from 1909 to the early 1960s. He became a popular heartthrob with the diva drama Ma l'amor mio non muore.../Love Everlasting (1913) opposite Lyda Borelli. 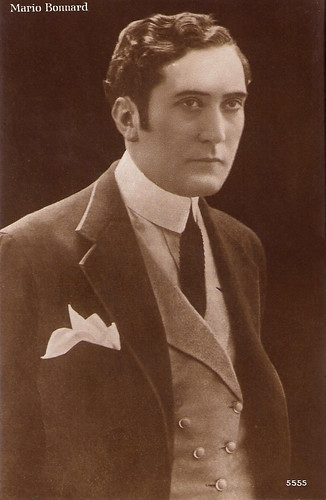 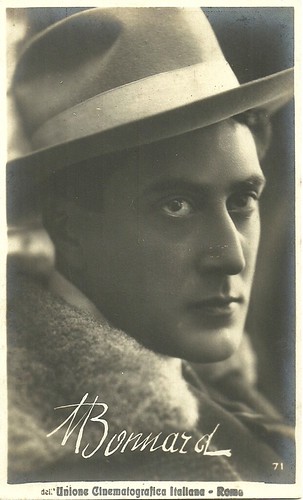 The Devil through the ages

In 1909 he started his career on the Roman amateur stage. Within a few months he started acting in films too, first in uncredited parts in such short films as Otello/Othello (Gerolamo Lo Savio 1909). Soon he had male leads as upper class types. His first known credited role was in Dalla morte alla vita/From death to life (director unknown, 1911) for Latium Film.

In Satana/Satan (Luigi Maggi, 1912), Bonnard was the devil through the ages (Old Testament, New Testament, Middle Ages and modern times), based on John Milton’s Paradise Lost and Friedrich Gottlieb Klopstock’s Der Messias (The Messiah). The film had an international success, even in the US.

After a few other films at Ambrosio, Bonnard shifted to the new Turinese company Gloria in the Summer of 1913. There he acted in the studio's first film Il treno degli spettri/The ghost train (Mario Caserini, 1913). This wasn’t as successful as the second Gloria film, the Hennequin & Veber boulevard comedy Florette et Patapon/Floretta and Patapon (Mario Caserini, 1913), with Bonnard as the lover of Bianca Patapon (Maria Caserini Gasperini). The film was widely praised as the first feature-length comedy and proving that comedy features were feasible.

In the fall of 1913, Bonnard’s breakthrough came as the male lead opposite Lyda Borelli in the Gloria production Ma l’amor mio non muore/Love Everlasting (Mario Caserini, 1913), which also launched Borelli as film star after a rich theatrical career. Bonnard played Prince Maximilian who falls in love with Diana, a popular opera singer (Borelli). She proves to have been exiled by his father the Duke, as she is Elsa Holbein, the daughter of a colonel who was accused of treachery when a foreign spy has stolen secret documents, and who committed suicide afterwards. 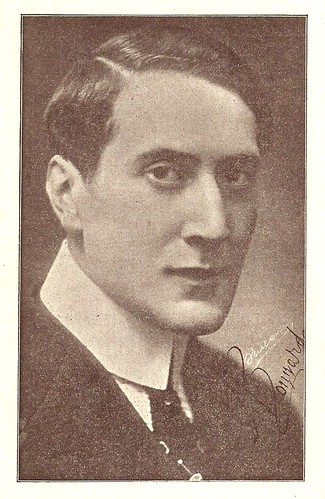 A brilliant and languid Italian dandy


Bonnard became a film heartthrob as a brilliant and languid Italian dandy, inspiring Ettore Petrolini for his latin-lover character Gastone. Bonnard’s penultimate film Gastone (1960) would be about this character.

After the success of Ma l’amor mio non muore, the dream couple Borelli-Bonnard was paired again by Gloria in La memoria dell’altro/The memory of the other (Alberto Degli Abbati, 1914). Here Lyda Borelli is a famous female aviator who falls in love with journalist Mario (Bonnard), but the two are separated, Lyda marries her rich suitor while Mario goes back to his fiancee. When in Venice they meet again, the flame re-arises, and together they flee to Paris, but there ill fate destroys their lives.

Bonnard had a little share in the popular Italian Antiquity films of 1913-1914 when he played Petronius in Caserini’s epic Nerone e Agrippina/Nero and Agrippina (Mario Caserini, 1914), Gloria’s answer to successes such as Cines’s Quo vadis (1913) and the two versions of Gli ultimi giorni di Pompei by Ambrosio and Pasquali (both 1913).

After several minor dramas at Gloria in 1914-1915, Bonnard moved to Caserini’s newly founded company and acted e.g. opposite Leda Gys in La pantomime della morte/The pantomime of death (Mario Caserini, 1915) and L’amor tuo mi redime/Leda di Roccarna/Your love redeems me (Mario Caserini, 1915). In 1915 Bonnard also founded his own company Bonnard film, for which Pier Angelo Mazzolotti did the direction. Most films were modest and plots were criticised, though Titanic (Pier Angelo Mazzolotti, 1915) received praise for its staging.

For La morsa della morte/Death's bite (Pier Angelo Mazzolotti, 1915), Bonnard had to leave the male lead to Giovanni Casaleggio, as he was called for service when Italy joined the Allies in the First World War. He was freed from service quite soon though.

In 1916, Bonnard went to work for the Roman Caesar Film company and was the star of Eduardo Bencivenga’s films Don Giovanni (1916), Il ridicolo/The ridiculous (1916), Ferréol (1916), and La figlia di Jorio/The daughter of Jorio (1917). The films only received lukewarm acclaim.

He also played in patriotic films such as Passano gli Unni/The Huns are passing (Mario Caserini, 1916), starring Lea Gys, Bonnard and Gianpaolo Rosmino, which premiered in Rome and Paris at the same time and was well received despite its not so subtle plot. Bonnard and Rosmino visited the Parisian premiere and they were applauded with enthusiasm.

In 1917 Bonnard ventured into his first direction with the film L'altro io/The other me, for his own company Electa Film. Vaguely inspired by Oscar Wilde and The Student of Prague, Bonnard plays a man who wounded by his perverse adversary, needs to have a piece of the latter’s brain implanted, with unforeseen consequences.

Bonnard was very successful with his second film Treno di lusso/Luxury train (1917), adapted from Umberto Notari’s novel, and starring Leda Gys as a poor Parisian girl who loses her child and successfully climbs the societal ladder. She is armed with cynicism, until she meets an engineer (Bonnard) she falls in love with. He has a wife and child though...

After 1917, Bonnard completely shifted to film direction instead of acting - possibly, as Lotti suggests, because of less positive reception of his acting. In 1919 he directed Ettore Petrolini in his first cinematographic interpretation in Mentre il pubblico ride/While the audience laughs (1919), taken from a play by Petrolini himself and by the futurist Francesco Cangiullo.

While other Italian directors and actors were looking at Hollywood, with Fairbanks and Valentino as model, Bonnard looked at French boulevard comedy, with Il tacchino/The turkey (1925) after Georges Feydeau’s Le dindon, and Teodoro e socio/Theodor and Co. (1926), based on the French stage comedy Théodore et Cie. Both films starred Marcel Levesque, while the female leads were French actress Maryse Dauvray and her Italian colleague Dolly Grey. 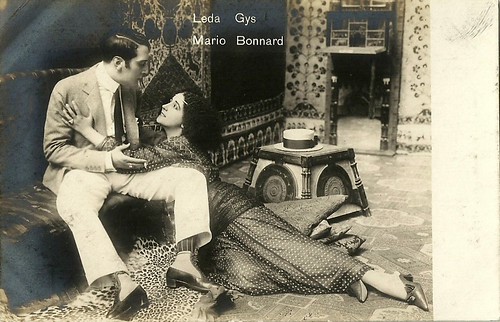 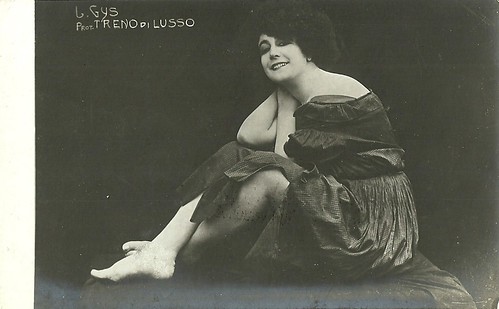 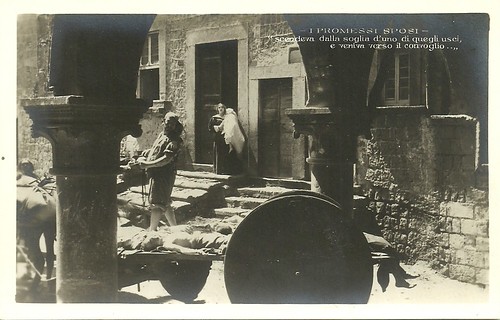 Italian postcard by G. Vettori, Bologna. Photo: U.C.I. Publicity still for I promessi sposi (Mario Bonnard, 1922), adapted from Alessandro Manzoni's classic novel, with Emilia Vidali as Lucia. During the Milan plague corpses are collected. Caption: She descended from the threshold of one of those exits and came towards the convoy.

Love on a trolley bus


At the collapse of the Italian film industry around 1923, Mario Bonnard went to Germany and he directed in Berlin several films with an international cast.

In 1928, Bonnard directed Der Kampf ums Matterhorn/The Battle for the Matterhorn, together with Nunzio Malasomma. The film helped Luis Trenker to make his breakthrough, and it co-starred Marcella Albani.

This was followed by other films with the daring mountaineer Trenker: Der Sohn der weißen Berge/The Son of the White Mountain (1930), Die heiligen drei Brunnen/The three holy wells (1930), as well as the French version Les chevaliers de la montagne (1930). Nunzio Malasomma directed Der Ruf des Nordens/The Call of the North (1929) but Bonnard had the supervision for this film.

At the beginning of the thirties, Bonnard shifted his focus to Paris and directed French and French-Italian productions – such as the comedy Trois hommes en habit/Tre uomini in frac/Three Lucky Fools (1933) - before finally settling in Rome in 1932.

There, he filmed with numerous well-known Italian actors of his time. His specialty was adaptations of stage comedies, interpreted by the greatest stars of the time: Assia Noris, Elsa Merlini, Amedeo Nazzari, Luisa Ferida, and Enrico Viarisio. The comedy Il feroce saladino/The Ferocious Saladin (1937) was the most popular of his films of the 1930s.

During the war years, Bonnard realised two works with a fresh grace and promoting the film careers of Aldo Fabrizi and Anna Magnani. The first was Avanti, c'è posto.../Come in, there is place enough... (1942), about a trolley bus conductor protecting and falling in love with a poor girl (Adriana Benetti), based on an idea by Aldo Fabrizi and Cesare Zavattini. The second was Campo de 'Fiori/The Peddler and the Lady (1943) with Fabrizi and Anna Magnani as two quarrelling marketers.

Bonnard’s film production in the post-war period was fast. He demonstrated excellent professional skills by directing films of various kinds, attentive to the public's tastes. His films ranged from comedies with Totò and Gino Cervi to historical films, from popular melodrama to Peplum up to the engaged film. He mixed typical pre-1945 actors such as Doris Duranti in the comedy Il voto/The Vow (1950) and Fosco Giachetti in Addio, mia bella Napoli!/Farewell my beautiful Naples (1947) with newcomers such as Antonella Lualdi in L’ultima sentenza/The Last Sentence (1951) and Brigitte Bardot in the historical melodrama Tradita/Haine, amour, trahison/Concert of Intrigue (1954).

Bonnard was the unsurpassable director of masses (Fra Diavolo, 1931) and packer of historical plots (Il ponte dei sospiri/The Bridge of Sighs, 1940). With Città dolente/City of Pain (1948) he directed a film virtually ignored by the public, documenting the exodus from Pula.

His Gli ultimi giorni di Pompei/The Last Days of Pompeii (1959) was interrupted by his illness and then completed by Sergio Leone. It gives proof of skilled craftsmanship, succeeding with limited means to compete with the great American productions. His last work as a director was the adventure film I masnadieri/Rome 1585 (1961).

Mario Bonnard died because of cardiac arrest in Rome in 1965. He was the younger brother of the soundtrack composer Giulio Bonnard, who frequently wrote film scores for Mario's productions.