William 'Bud' Abbott (1895–1974) and Lou Costello (1906–1959) were an American comedy duo, that first worked together in 1935. Their work in vaudeville and on stage, radio, film and television made them the most popular comedy team during the 1940s and early 1950s. Bud Abbott was the devious straight man and Lou Costello the stumbling, dim-witted laugh-getter. Their signature routine 'Who's on First?' is considered one of the greatest comedy routines of all time and set the framework for many of their best-known comedy bits. 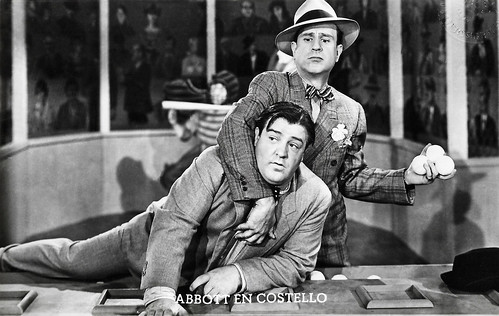 
Bud Abbott was born in Asbury Park, New Jersey in 1897, into a show business family. His parents, Rae Fisher and Harry Abbott, had worked for the Barnum and Bailey Circus. Several years after the family relocated to Brooklyn, Abbott dropped out of grammar school and began working summers with his father at Dreamland Park on Coney Island.

When he was 15, Abbott signed on as a cabin boy on a Norwegian steamer but was soon forced to shovel coal. He eventually worked his way back to the United States after a year. His father was a longtime advance man for the Columbia Burlesque Wheel, and he installed Bud in the box office of the Casino Theater in Brooklyn. Bud spent the next few years in burlesque box offices.

In 1918, working in Washington, D.C., he met and married Jenny Mae Pratt, a burlesque dancer, and comedian who performed as Betty Smith. They remained together until his death 55 years later.

In 1923 Abbott produced a cut-rate vaudeville tab show called Broadway Flashes, which toured on the Gus Sun circuit. Abbott began performing as a straight man in the show when he could no longer afford to pay one. He continued producing and performing in burlesque shows on the Mutual Burlesque wheel, and as his reputation grew, he began working with veteran comedians like Harry Steppe and Harry Evanson. Abbott suffered from epilepsy starting from about 1926.

Abbott crossed paths with Lou Costello in burlesque a few times in the early 1930s when Abbott was producing and performing in Minsky's Burlesque shows and Costello was a rising comic. They first worked together in stock burlesque in 1935 at the Eltinge Theatre on 42nd Street, after an illness sidelined Costello's regular partner. They formally teamed up in 1936, and went on to perform together in burlesque, vaudeville, minstrel shows, and stage shows.

In 1938, they received national exposure as regulars on the Kate Smith Hour radio show, which led to roles in a Broadway musical, The Streets of Paris. In 1940, Universal signed the team for their first film, One Night in the Tropics (A. Edward Sutherland, 1940), starring Allan Jones. Despite having minor roles, Abbott and Costello stole the film with several classic routines, including an abbreviated version of 'Who's On First?' Their work earned them a two-picture deal with Universal.

Abbott was very supportive of his relatives. Norman and Betty Abbott, the children of Bud's older sister, Olive, started their careers working behind the scenes on Abbott and Costello films. Betty became Blake Edwards' longtime script supervisor, and Norman directed episodes of many television series, including Leave It to Beaver, The Jack Benny Program, Sanford and Son, and Welcome Back, Kotter.

Bud Abbott died of cancer at the age of 76 in 1974, at his home in Woodland Hills, Los Angeles. 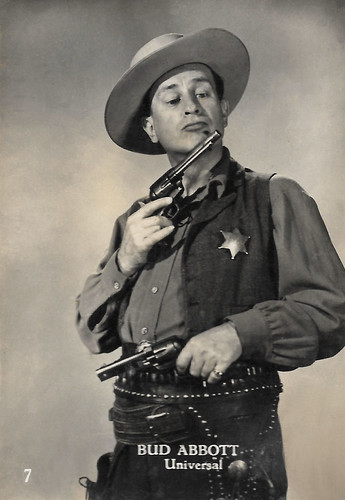 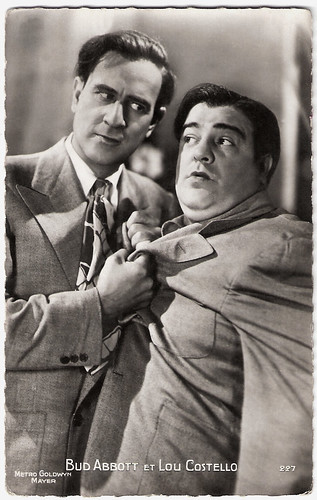 
Lou Costello was born Louis Francis Cristillo in 1906 in Paterson, New Jersey, the son of Helen Rege and Sebastiano Cristillo.He attended School 15 in Paterson and was considered a gifted athlete. He excelled in basketball and reportedly was once the New Jersey state free throw champion. His singular basketball prowess can be seen in Here Come the Co-Eds (1945), in which he performs all his own tricky hoop shots without special effects. He also fought as a boxer under the name 'Lou King'. He took his professional name from actress Helene Costello.

In 1927 Costello hitchhiked to Hollywood to become an actor, but could only find work as a labourer or extra at Metro-Goldwyn-Mayer and Warner Bros. His athletic skill brought him occasional work as a stunt man, notably in The Trail of '98 (Clarence Brown, 1928) featuring Harry Carey. He can also be spotted sitting ringside in the Laurel and Hardy film The Battle of the Century (Clyde Bruckman, 1927).

In 1929, with the advent of sound film, he headed back east intending to get the requisite stage experience. In New York he began working in burlesque on the Mutual Burlesque wheel during the Great Depression.

After the Mutual Wheel collapsed, Costello went to work for the Minskys, where he crossed paths with Bud Abbott. In 1935 they first worked together at the Eltinge Theatre on 42nd Street in New York City when Costello's partner failed to show. Abbott and Costello formally teamed up in 1936.

Abbott and Costello were signed by the William Morris talent agency, which succeeded in landing them featured roles and national exposure. Their second film, Buck Privates (Arthur Lubin, 1941), with The Andrews Sisters, was a runaway hit. It grossed $10 million on a $180,000 budget, what was then a company record.

By the mid-1950s Abbott and Costello's popularity waned, and after failing to come to terms with the team, Universal dropped their film contract in 1955. With radio, film and television vehicles, they suffered from overexposure, and were eclipsed by the team of Dean Martin and Jerry Lewis who had taken their place as the cinema's hottest comedy team.

In 1956, after troubles with the Internal Revenue Service forced both men to sell their large homes and the rights to some of their films, Abbott and Costello made their final film together, an independent production called Dance with Me, Henry (Charles Barton, 1956). The film was a box-office disappointment and received mixed critical reviews. Abbott and Costello dissolved their partnership in 1957 amicably.

Costello went back to his roots of stand-up, including stints in Las Vegas, and sought film projects for himself. He appeared several times on Steve Allen's fledgling The Tonight Show, but most often in variations of his old routines, with Louis Nye or Tom Poston taking on the straight man role. Costello sought to be known as something other than the funny fat man in the baggy clothes, and played a dramatic role on The Tobias Jones Story episode of Wagon Train (1958).

Shortly after completion of The 30 Foot Bride of Candy Rock (Sidney Miller, 1959) with Dorothy Provine, his only starring film appearance without Abbott, Lou Costello suffered a heart attack. He died at Doctors Hospital in Beverly Hills on 3 March 1959, three days before his 53rd birthday. 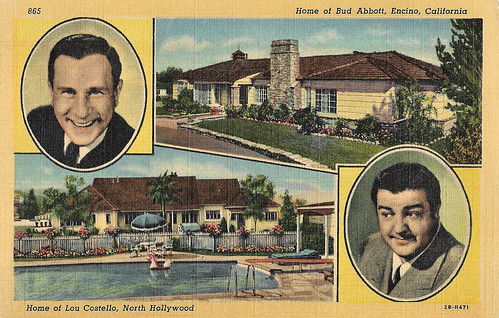 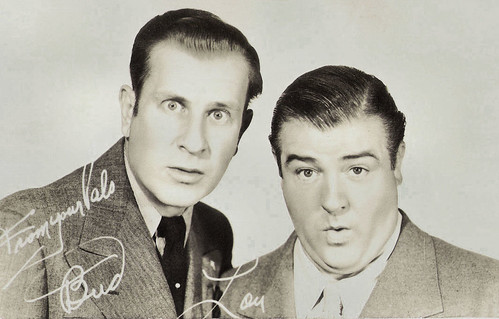