American stage, film, television actress and singer Gloria Grahame (1923-1981) was often cast in Film Noirs as a tarnished beauty with an irresistible sexual allure. She received an Oscar for Best Supporting Actress nomination for Crossfire (1947), and would later win the award for The Bad and the Beautiful (1952). Her best known films are Sudden Fear (1952), Human Desire (1953), The Big Heat (1953), and Oklahoma! (1955), but her film career began to wane soon afterwards. 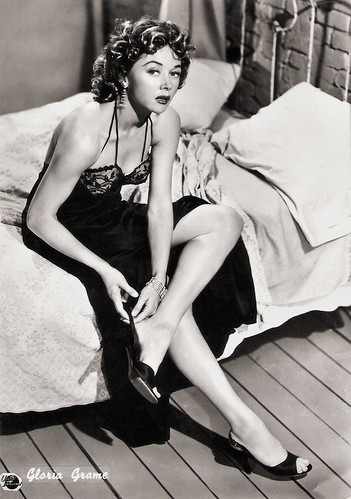 A Tart with a Heart


Gloria Grahame Hallward was born in in Los Angeles, California in 1921. Her father, Reginald Michael Bloxam Hallward, was an architect and author; her mother, Jeanne McDougall, who used the stage name Jean Grahame, was a British stage actress and acting teacher. Her older sister, Joy Hallward became an actress who married John Mitchum, the younger brother of Robert Mitchum.

During Gloria's childhood and adolescence, her mother taught her acting. Grahame attended Hollywood High School before dropping out to pursue acting. She was signed to a contract with MGM Studios under her professional name after Louis B. Mayer saw her performing on Broadway.

Grahame made her film debut as a tart-with-a-heart in the sex comedy Blonde Fever (Richard Whorf, 1944) with Philip Dorn, and then scored one of her most widely praised roles as the flirtatious Violet Bick, saved from disgrace by James Stewart in It's a Wonderful Life (Frank Capra, 1946). MGM was not able to develop her potential as a star and her contract was sold to RKO Studios in 1947.

She was nominated for the Academy Award for Best Supporting Actress in Crossfire (Edward Dmytryk, 1947), a Film Noir which deals with the theme of anti-Semitism. During this time, she made films for several Hollywood studios. For Columbia Pictures, Grahame starred with Humphrey Bogart in another Film Noir, In a Lonely Place (Nicholas Ray, 1950), a performance for which she again gained praise.

In 1952, Grahame starred in four major Hollywood-productions, including a part in the Film Noir Sudden Fear (David Miller, 1952), starring Joan Crawford, and a reunion with James Stewart in Cecil B. DeMille’s The Greatest Show on Earth, which won the Best Picture Oscar in 1953. 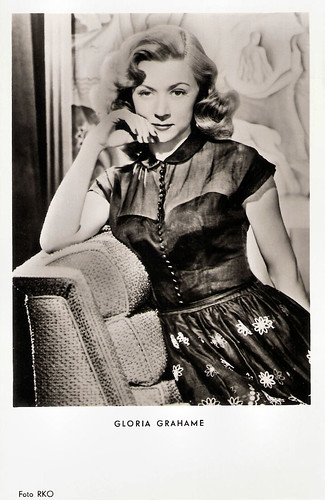 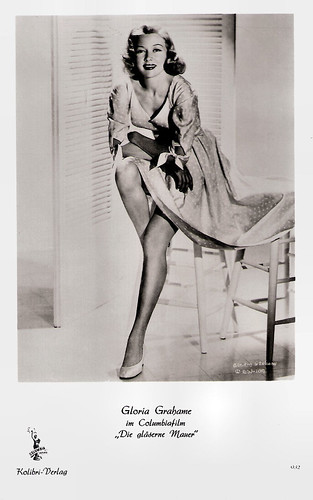 
29-year-old Gloria Grahame was on the verge of superstardom, when she herself won the Supporting Actress Oscar for her performance in The Bad and the Beautiful (Vincente Minnelli, 1952), starring Lana Turner and Kirk Douglas.

Sadly, following her Oscar victory, the beauty Grahame embodied so artfully on screen never reflected the personal turmoil festering under the surface. Her two marriages had ended in a divorce: one from allegedly abusive actor Stanley Clements (1945-1948), the other from Rebel Without a Cause director Nicholas Ray (1948-1952), with whom she had a son, Timothy.

In 1954, she acted and sang in the adaptation of Richard Rodgers and Oscar Hammerstein’s musical Oklahoma! (Fred Zinnemann, 1955) as the 'girl who can’t say no,' Ado Annie. That same year she married writer-producer Cy Howard. After Oklahoma!, Grahame scaled back her work. There were rumours that she had been difficult to work with on the set of Oklahoma!.

Two years later, she divorced Howard. In 1960, she married former stepson Tony Ray, son of Nicholas Ray. This led Nicholas Ray and Cy Howard to each sue for custody of each's child by Grahame, putting gossip columnists and scandal sheets into overdrive. Rumours circulated that Grahame had initially seduced Tony when he was just 13. Along with her tarnished professional reputation, this gossip made her a Hollywood outcast. 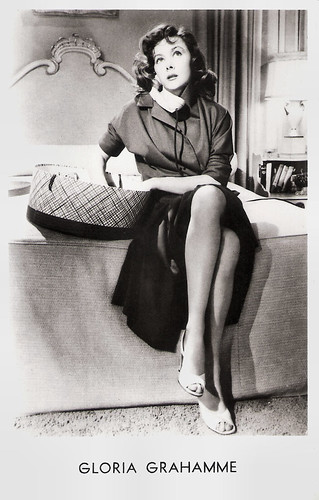 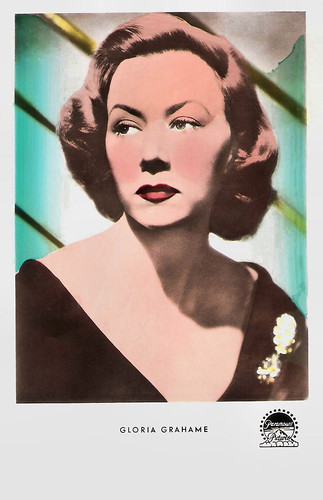 A nervous breakdown and electroshock therapy


In the 1960s, Gloria Grahame dedicated herself to raising her growing family after having two sons with Tony. The stress of the scandal, her waning career and her custody battle with Howard took its toll on Grahame and she had a nervous breakdown. She later underwent electroshock therapy in 1964.

After that, she began a slow return to the theatre. She popped up as an occasional guest on TV series, and when she found her way back to the big screen, it was in exploitation films like Blood and Lace (Philip S. Gilbert, 1971) and Mama’s Dirty Girls (John Hayes, 1974).

In March, 1974, Grahame was diagnosed with breast cancer. She underwent radiation treatment, changed her diet, stopped smoking and drinking alcohol, and also sought homoeopathic remedies. In less than a year the cancer went into remission. Grahame never reclaimed her former glory, but the Oscar itself stood proudly on her mantel, an enduring reminder of her accomplishments.

In 1978, she met aspiring actor Peter Turner, while she was in Britain working on a stage production of W. Somerset Maugham’s Rain. Although Turner was nearly three decades her junior, they had a whirlwind romance. She co-starred in the British heist film A Nightingale Sang in Berkeley Square (Ralph Thomas, 1979) starring Richard Jordan, Oliver Tobias, and David Niven.

In 1980 followed her last major film, Melvin and Howard, (Jonathan Demme, 1980), in which she played Mary Steenburgen’s mother. The cancer returned in 1980 but Grahame refused to acknowledge her diagnosis or seek radiation treatment. Despite her failing health, Grahame continued working in stage productions in the United States and the United Kingdom.

At age 57, Gloria Grahame died in 1981 in a New York hospital from cancer-related complications. Peter Turner wrote about their love story in his memoir, Film Stars Don’t Die in Liverpool, which director Paul McGuigan adapted in 2017 into an excellent film starring Annette Bening and Jamie Bell.