In the section 'Recovered and Restored', Cinema Ritrovato presents Five Easy Pieces (1970) by Bob Rafelson. It is one of my favourite Jack Nicholson films. He became my hero when I saw him in One Flew Over the Cuckoo's Nest (1975) during high school. In both films he was the guy who rebels against the social structure. Since then he played countless anti-heroes and villains. Although Nicholson has performed in films for over sixty years now and received 12 (yes twelve!) Oscar nominations, I still have a soft spot for these two films he made in the first half of the 1970s. 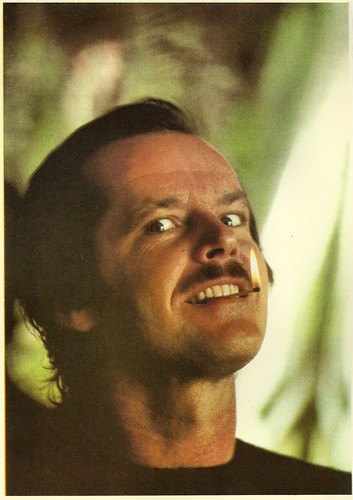 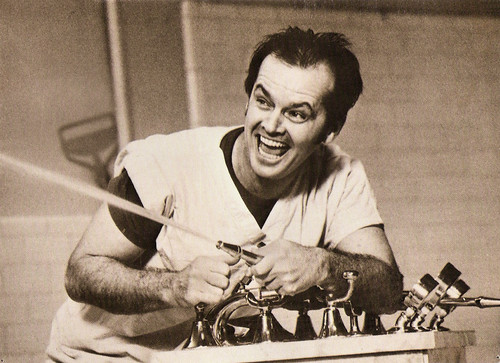 Spanish postcard by Foto Parjetas, Madrid, no. FC-225. Photo: Jack Nicholson in One Flew Over the Cuckoo's Nest (Miloš Forman, 1975).


Jack Nicholson was born in 1937 as John Joseph Nicholson in Neptune City, New Jersey. He was the son of a showgirl, June Frances Nicholson (stage name June Nilson). She married Italian-American showman Donald Furcillo (stage name Donald Rose) in 1936, before realising that he was already married.

Biographer Patrick McGilligan stated in his book 'Jack's Life' that Latvian-born Eddie King, June's manager, may have been Nicholson's biological father, rather than Furcillo. Other sources suggest June Nicholson was unsure of who the father was. As June was only seventeen years old and unmarried, her parents agreed to raise Nicholson as their own child without revealing his true parentage, and June would act as his sister.

In 1974, Time magazine researchers learned, and informed Nicholson, that his 'sister', June, was actually his mother, and his other 'sister', Lorraine, was really his aunt. By this time, both his mother and grandmother had died (in 1963 and 1970, respectively). On finding out, Nicholson said it was "a pretty dramatic event, but it wasn't what I'd call traumatizing ... I was pretty well psychologically formed".

In 1957, Nicholson joined the California Air National Guard. After completing the Air Force's basic training, Nicholson performed weekend drills and two-week annual training as a fire fighter. Nicholson first came to Hollywood in 1954, when he was seventeen, to visit his sister. He took a job as an office worker for animators William Hanna and Joseph Barbera at the MGM cartoon studio.

He trained to be an actor with a group called the Players Ring Theater, after which time he found small parts performing on the stage and in TV soap operas. He made his film debut in a low-budget teen drama The Cry Baby Killer (Justus Addiss, 1958), playing the title role. For the following decade, Nicholson was a frequent collaborator with the film's producer, Roger Corman. Corman directed Nicholson on several occasions, most notably in The Little Shop of Horrors (Roger Corman, 1960), as masochistic dental patient and undertaker Wilbur Force, and also in The Raven (Roger Corman, 1963), The Terror (Roger Corman, 1963) as a French officer seduced by an evil ghost, and The St. Valentine's Day Massacre (Roger Corman, 1967).

However, Nicholson seemed resigned to a career behind the camera as a writer/director. His first real taste of writing success was the screenplay for the counterculture film The Trip (Roger Corman, 1967), which starred Peter Fonda and Dennis Hopper. Nicholson also co-wrote, with Bob Rafelson, Head (Bob Rafelson, 1968), which starred The Monkees. He also arranged the film's soundtrack. Nicholson's first turn in the director's chair was for Drive, He Said (1971). 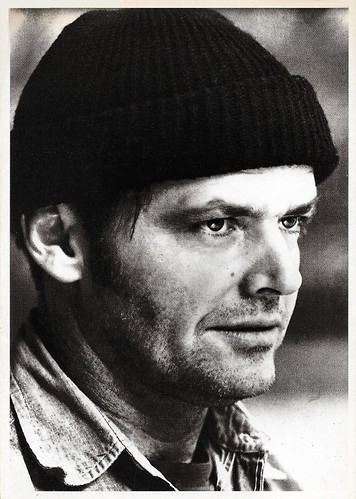 French postcard by Especially for you, no. Réf. 39. Photo: Jack Nicholson in One Flew Over the Cuckoo's Nest (Miloš Forman, 1975). 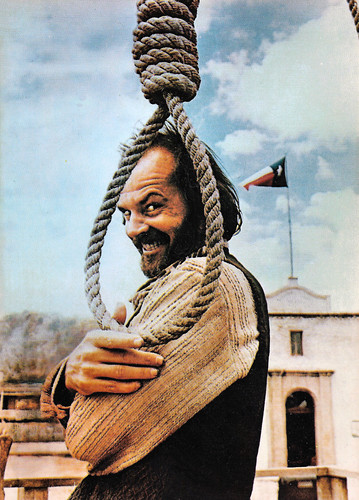 A hero of the counter-culture movement


Jack Nicholson had his acting break when a spot opened up in Easy Rider (Dennis Hopper, 1969). Nicholson played liquor-soaked lawyer George Hanson, for which he received his first Oscar nomination. The film cost only $400,000 to make, and became a blockbuster, grossing $40 million. Overnight, Nicholson became a hero of the counter-culture movement.

Nicholson was cast by Stanley Kubrick, who was impressed with his role in Easy Rider, in the part of Napoleon in a film about his life, and although production on the film commenced, the project fizzled out, partly due to a change in ownership at MGM.

Nicholson starred in Five Easy Pieces (Bob Rafelson, 1970) alongside Karen Black. Bobby Dupea, an oil rig worker, became his persona-defining role. Nicholson and Black were nominated for Academy Awards for their performances. Critics began speculating whether he might become another Marlon Brando or James Dean.

His career and income skyrocketed. Nicholson starred in Carnal Knowledge (Mike Nichols, 1971), which co-starred Art Garfunkel, Ann-Margret, and Candice Bergen. Other roles included Billy 'Bad Ass' Buddusky in The Last Detail (Hal Ashby, 1973). For his role, Nicholson won the Best Actor award at the Cannes Film Festival, and he was nominated for his third Oscar and a Golden Globe.

In 1974, Nicholson starred in Roman Polanski's majestic Film Noir Chinatown, opposite Faye Dunaway. For his role as private detective Jake Gittes, he was again nominated for Academy Award for Best Actor. The role was a major transition from the exploitation films of the previous decade.

One of Nicholson's greatest successes came with his role as Randle P. McMurphy in One Flew Over the Cuckoo's Nest (Miloš Forman, 1975). It was an adaptation of Ken Kesey's novel, and co-produced by Michael Douglas. Nicholson plays an anti-authoritarian patient at a mental hospital where he becomes an inspiring leader for the other patients. The film swept the Academy Awards with nine nominations, and won the top five, including Nicholson's first for Best Actor.

Also in that year, Nicholson starred in Michelangelo Antonioni's The Passenger (1975), which co-starred Maria Schneider. The film received good reviews and revived Antonioni's reputation as one of cinema's great directors. Nicholson took a small role in The Last Tycoon (Elia Kazan, 1976), opposite Robert De Niro. He took a less sympathetic role in Arthur Penn's Western The Missouri Breaks (1976), specifically to work with Marlon Brando. 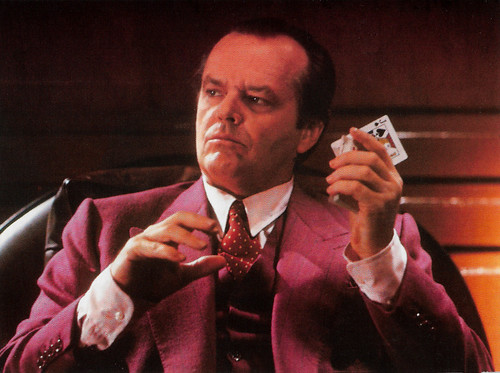 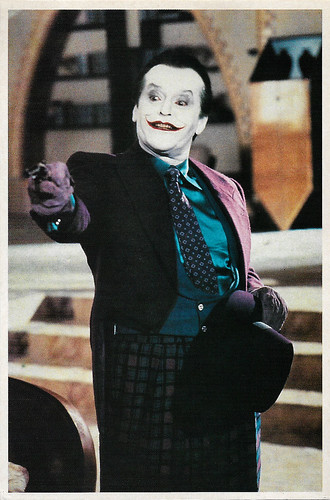 
Although Jack Nicholson did not win an Oscar for Stanley Kubrick's adaptation of Stephen King's The Shining (1980), it remains one of his more significant roles. Nicholson improvised his now famous "Here's Johnny!" line, along with the scene in which he's sitting at the typewriter and unleashes his anger upon his wife after she discovers he has gone insane when she looks at his writing ("all work and no play makes Jack a dull boy" typed endlessly).

In 1982, he starred as an immigration enforcement agent in The Border (Tony Richardson, 1982, co-starring Warren Oates. Nicholson won his second Oscar, an Academy Award for Best Supporting Actor, for his role of retired astronaut Garrett Breedlove in Terms of Endearment (James L. Brooks, 1983), starring Shirley MacLaine and Debra Winger. He and MacLaine played many of their scenes in different ways, constantly testing and making adjustments.

In Batman (Tim Burton, 1989), Nicholson played the psychotic murderer and villain, the Joker. Batman creator Bob Kane personally recommended him for the role. The film was an international smash hit, and a lucrative percentage deal earned him a percentage of the box office gross estimated at $60 million to $90 million.

For his role as hot-headed Col. Nathan R. Jessup in A Few Good Men (Rob Reiner, 1992), a film about a murder in a U.S. Marine Corps unit, Nicholson received yet another Oscar nomination for Best Supporting Actor. In 1996, Nicholson collaborated once more with Batman director Tim Burton on Mars Attacks!, pulling double duty as two contrasting characters, President James Dale and Las Vegas property developer Art Land. At first, studio executives at Warner Bros. disliked the idea of killing off Nicholson's character, so Burton created two characters and killed them both off.

Nicholson went on to win his next Academy Award for Best Actor in the romantic comedy As Good as It Gets (1997), his third film directed by James L. Brooks. He played Melvin Udall, a wickedly funny, mean-spirited, obsessive-compulsive novelist. His Oscar was matched with the Academy Award for Best Actress for Helen Hunt, who played a Manhattan wisecracking, single-mother waitress drawn into a love/hate friendship with Udall, a frequent diner in the restaurant. The film was a impressive box office success, grossing $314 million, which made it Nicholson's second-best-grossing film of his career, after Batman. 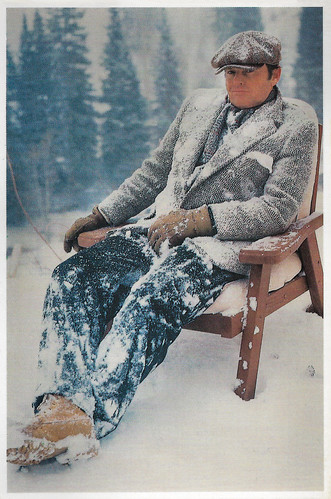 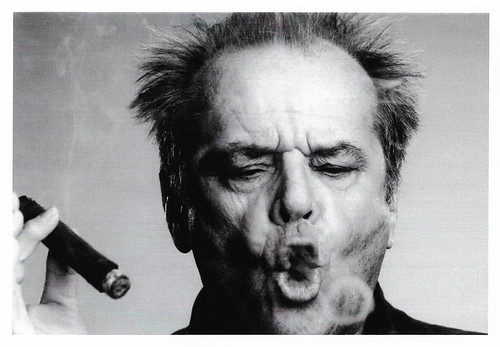 A return to the dark side


In About Schmidt (Alexander Payne, 2002), Nicholson portrayed a retired Omaha, Nebraska, actuary who questions his own life following his wife's death. His quietly restrained performance earned him another Oscar Nomination. In Anger Management (Peter Segal, 2003), he played an aggressive therapist assigned to help an over pacifist man (Adam Sandler).

In 2003, Nicholson also starred in Something's Gotta Give (Nancy Meyers, 2003), as an ageing playboy who falls for the mother (Diane Keaton) of his young girlfriend.

In late 2006, Nicholson marked his return to the dark side as Frank Costello, a nefarious Boston Irish Mob boss, based on Whitey Bulger who was still on the run at that time, presiding over Matt Damon and Leonardo DiCaprio in Martin Scorsese's Oscar-winning film The Departed, a remake of Andrew Lau's Mou gaan dou/Infernal Affairs (2002). The role earned Nicholson worldwide critical praise, along with various award wins and nominations, including a Golden Globe nomination.

In 2007, Nicholson co-starred with Morgan Freeman in The Bucket List (Rob Reiner, 2007). Nicholson and Freeman portrayed dying men who fulfil their list of goals. Nicholson reunited with James L. Brooks, director of Terms of Endearment, Broadcast News, and As Good as It Gets, for a supporting role as Paul Rudd's character's father in How Do You Know (2012).

It had been widely reported in subsequent years that Nicholson had retired from acting because of memory loss, but in a September 2013 Vanity Fair article, Nicholson clarified that he did not consider himself retired, merely that he was now less driven to "be out there any more". In 2015, Nicholson made a special appearance as a presenter on SNL 40, the 40th anniversary special of Saturday Night Live.

After the death of boxer Muhammad Ali in 2016, Nicholson appeared on HBO's The Fight Game with Jim Lampley for an exclusive interview about his friendship with Ali. In 2017, it was reported that Nicholson would be starring in an English-language remake of Toni Erdmann (Maren Ade, 2016) opposite Kristen Wiig, but Nicholson dropped out of the project.

Jack Nicholson has also directed three films, including The Two Jakes (1990), the sequel to Chinatown. Nicholson is one of three male actors to win three Academy Awards. He also has won six Golden Globe Awards.

He has had a number of high-profile relationships, and was married to actress Sandra Knight from 1962 until their divorce in 1968. Nicholson has five children. His eldest daughter is Jennifer Nicholson (1963), from his marriage to Knight. He has a son, Caleb James Goddard (1970) with actress Susan Anspach, and a daughter, Honey Hollman (1981) with Danish supermodel Winnie Hollman. With Rebecca Broussard, he has two children, Lorraine Nicholson (1990) and Ray Nicholson (1992). Nicholson's longest relationship was the 17 years he spent with actress Anjelica Huston; this ended when Broussard become pregnant with his child.

Jack Nicholson is the only actor to ever play the Devil, the Joker, and a werewolf.