Evelyn Brent (1899-1975), was an American actress of the silent screen. Josef von Sternberg paved the way for her to become a top star through her role of the tough prostitute Feathers in Underworld (1927). The dark-haired, aquiline Brent became a matinee idol with performances as exotic temptresses and vamps in such films as the epic war drama The Last Command (Josef von Sternberg, 1928). 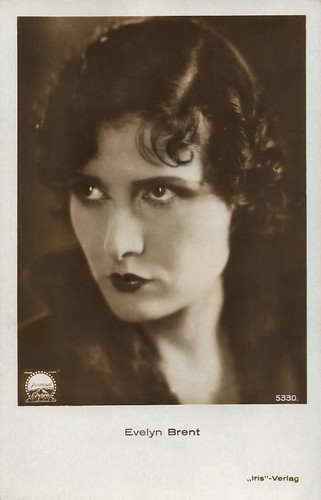 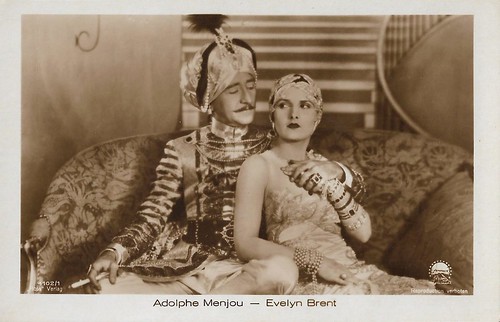 
Evelyn Brent was born as Mary Elizabeth Riggs in 1899. 'Betty' was a child of 10 when her mother Eleanor died, leaving her father Arthur to raise her alone. After moving to New York City as a teenager, her good looks brought modelling jobs.

She originally studied to be a teacher. While attending a normal school in New York she visited the Popular Plays and Players Studio in Fort Lee, New Jersey, a production cooperative for distributors World Film, Pathe and Metro. Two days later she was working there as an extra making $3 a day, using her original name, Betty Riggs.

She made her major debut in the silent film production of the Robert W. Service poem, The Shooting of Dan McGrew (Herbert Blaché, 1915) for Solax Studios. As Evelyn Brent, she continued to work in film, developing into a young woman whose sultry looks were much sought after.

From 1916 on, she already had leading roles in East coast film productions. In 1917 she joined John Barrymore in Raffles the Amateur Cracksman (George Irving, 1917), about a highly educated crook with entree to the best social circles. Barrymore had personally hand-picked her as his leading lady.

Evelyn Brent then took a sabbatical for health reasons and went to England. She met American playwright Oliver Cromwell who urged her to accept an important role in the George Bernard Shaw comedy 'The Ruined Lady' at the West End.

The actress remained in England for four years. She performed for such film companies as Ideal and Stoll and with male partners like Clive Brook and Jack Trevor. In 1922, she even went to Spain as star of The Spanish Jade (John S. Robertson, 1922) opposite Charles de Rochefort, distributed in America by Paramount.

She returned in 1922 to the US, and moved to Hollywood. In 1923, she was named one of the WAMPAS Baby Stars. Douglas Fairbanks Sr. signed her but failed to find a story for her; she left his company to join Associated Authors.

Brent acted in a whole series of films at Fox in 1924, while in 1924-1926 she did a large number of films at Robertson-Cole and FBO, turning her into a popular actress in such B films as Midnight Molly (Lloyd Ingraham, 1925) and Broadway Lady (Wesley Ruggles, 1925). 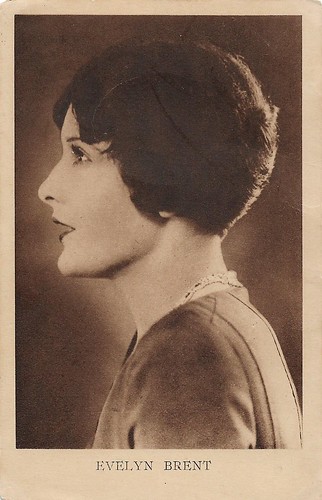 
In the later 1920s, Evelyn Brent occasionally starred in A productions, mainly at Paramount. At Paramount, it was Josef von Sternberg who paved the way for Brent to become a top star through her role of the prostitute Feathers in Underworld (Josef von Sternberg, 1927), opposite Clive Brook and George Bancroft.

Next she appeared as Natacha Dabrova in the epic war drama The Last Command (Josef von Sternberg, 1928), opposite Emil Jannings and William Powell.  In The Last Command, Brent's character saves Jannings' Grandduke Sergius during the Russian Revolution, at the expense of her own life. Jannings won the first Oscar for his part in this film and in The Way of All Flesh (Victor Fleming, 1927).

Paramount used Evelyn Brent, William Powell and Clive Brook as stars in their first feature-length all-talking film, Interference (Lothar Mendes, 1928). She was excellent as a blackmailer, but the film did not live up to expectations at the box office.

Despite that, Brent played major roles in several more features, most notably the Alaska-set romantic drama The Silver Horde (George Archainbaud, 1930) with Joel McCrea. The New York Times described the film in a critical review as 'dull and trivial' . And Brent's part in Paramount Pictures all-star revue Paramount on Parade (Edmund Goulding, a.o., 1930) was only small.

Overall, the transition to sound film ended her promising future. I.S. Mowis at IMDb: "While Evelyn's voice proved no detriment to her success in talking pictures, the declining quality of her films did." Paramount annulled their contract with Brent, who then spent the remaining years of her film career in cheap Westerns and 'quota quickies' for RKO and later for poverty row studios, such as Monogram and PRC. She also appeared in vaudeville shows.

Wikipedia: "She photographed attractively opposite leading men who were also at advanced ages and later stages in their careers: Neil Hamilton in Producers Releasing Corporation's production Dangerous Lady, Lee Tracy in the same studio's The Payoff, and Jack Holt in the serial Holt of the Secret Service, produced by Larry Darmour for Columbia Pictures. Her performances were still persuasive, and her name was still recognizable to moviegoers: theater owners often put "Evelyn Brent" on their marquees."

Evelyn Brent was married three times: to film executive Bernard P. Fineman, to producer Harry D. Edwards, and finally to the vaudeville actor Harry Fox for whom the foxtrot dance was named. They were still married when he died in 1959.

Evelyn Brent died of a heart attack in 1975 at her Los Angeles home. She was cremated and interred in the San Fernando Mission Cemetery in Mission Hills. In 1960, she was awarded a star on the Hollywood Walk of Fame. 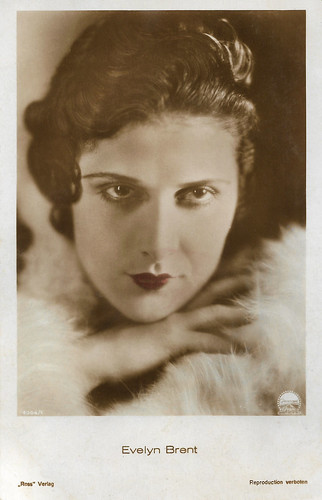 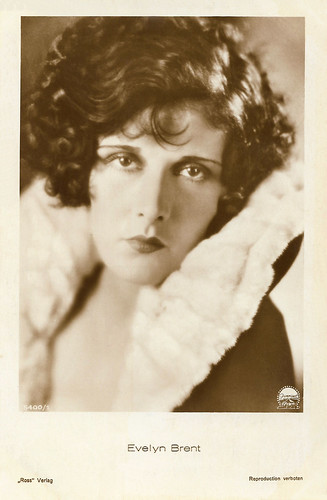