Isak Thorsen's The Rise and Fall of the Polar Bear

Every Thursday this summer, EFSP will post on a film book (I waited one day with this post because of the passing of Rutger Hauer). Last month, at the Il Cinema Ritrovato Book Fair in Bologna, I found 'Nordisk Films Kompagni 1906-1924: The Rise and Fall of the Polar Bear'. It is a scholarly study by Isak Thorsen published in the KINtop series on early cinema. The Danish Nordisk company was one of the film studios that dominated the global film market during the 1910s. How did the Danes manage to do that? Why did it go wrong with Nordisk's international aspirations in the 1920s? And my personal cliffhanger: will my earlier post on Nordisk be 'scholarly approved'? 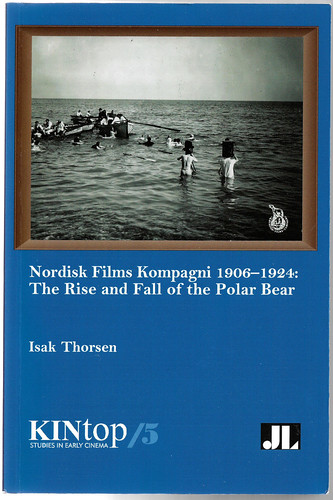 
Although Isak Thorsen's book is based on his 2009 Phd Dissertation, 'The Rise and Fall of the Polar Bear' reads like an exciting and fascinating adventure novel. Central character is a man called Ole Olsen. In 1906 he founded the company which soon became an international enterprise. Until 1924, when Olsen stepped down we follow through all kinds of historical documents how he organised his film studio as a business organisation, during a period that knew more radical changes than any other era in film history.

Ole Olsen (1863-1943) must have been quite a character. He was founder, sole proprietor, then director general and general of the board, and finally rank-and-file member of the board. Olsen was the guy who took all the smart decisions. He was the typical self-made-man with many enterprises behind him. On the fairgrounds, Olsen had performed in 1895 with an x-ray machine through which you could see your own bones. From such a sensational innovation to the cinema must have been a small step for him and in 1898 Olsen was one of the first to show motion pictures in Sweden.

In 1905 he became co-owner of the second cinema in Copenhagen, Biograf-Theatret, which soon became popular among the Danes. But Olsen did not have enough film titles to show, so he decided to make his own films. On 8 January 1906, Olsen presented under the label of Nordisk a film in two parts, Maagerne fodres i Orstedsparken/Seaguls are fed in the H.C. Orstedsparken. Soon followed actualities, comedies, travelogues, industrial films, sports films etc.

In less than a year, Ole Olsen owned a printing laboratory, a studio and a branch office of Nordisk in Berlin. Like many other film pioneers Olsen was a lawless cowboy. In 1907 he bought two lions at the Haagenbeck Zoo in Hamburg and at the island of Elleore, his film crew shot a film about two big game hunters, Lovejagten/The Lion Hunt (Viggo Larsen, 1907). Although the government and animal organisations had protested, the two lions were killed for the film. The scandal in Denmark caused a world-wide success. The film was Nordisk's breakthrough to the international market.

It is fascinating to read how Nordisk grew and innovated itself. Thorsen explains that one of the reasons why Nordisk would play a decisive role in the European film industry of the 1910s was that Ole Olsen solved a fundamental problem of the industry - the enormous overproduction of films. Nordisk became one of the first film companies to base major parts of its production on multiple-reel films. It lead to a sweeping revolution in the production, distribution and exhibition of films. 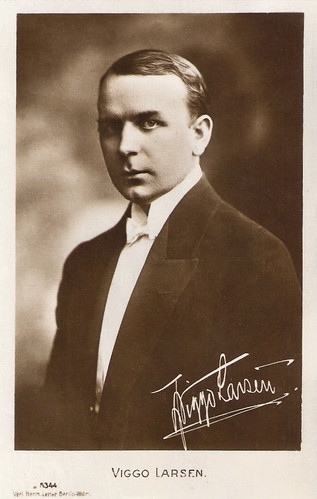 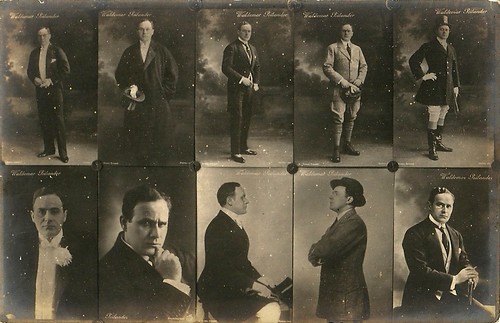 Valdemar Psilander. German postcard. Psilander appeared in his first Nordisk Film feature, Ved fængslets port/Temptations of a Great City (August Blom, 1911). He made more than eighty Nordisk Film features and was considered to be one of the greatest (and best paid) film stars of his time. 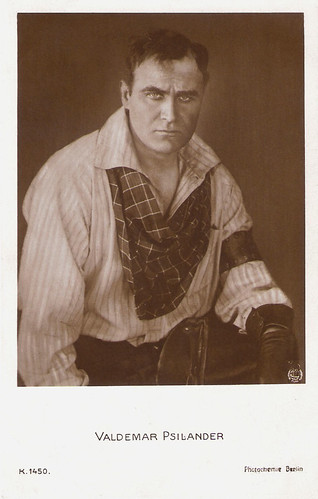 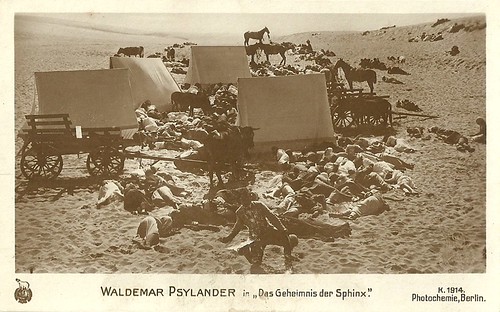 The fall of the polar bear


What caused Nordisk's demise? Several scholars wrote that the quality of the Nordisk films caused the fall of the polar bear. As a true scholar, Isak Thorsen adds some question marks to this point of view.

In 1913, Olsen himself wrote a circular to his directors in which he warned them that their productions had become "weaker than ever before". He wrote that he was prepared to sack the whole staff unless the directors produced better work, which was "worthy of the company standards". In 1913, American films had begun to gain a foothold in the European cinemas and nearby in Sweden, Scandinavian directors like Mauritz Stiller, Victor Sjöström and Benjamin Christensen had started to make their masterpieces which received much acclaim.

But still, Thorsen says no scholar can prove that the quality of the Nordisk films really went downhill in these years, simply because only a small part of the films has survived. In fact he shows based on many documents that in fact Nordisk did pretty well economically during the war years. In 1918 Nordisk produced 65 films and that's not bad indeed. But two years later the studio produced only 12 films and in the following years even less. What was the reason?

In the post-war years, Nordisk suffered from the loss of the Russian market. And Olsen's grand plan for taking control of UFA in association with the American Famous Players fell flat. The studio lost control over its most important markets and therefore Olsen decided to quit his studio in 1924.

So not the poor quality of the films caused the downfall of Nordisk as an international enterprise, but the changing international situation. Isak Thorsen's impressive book stops in 1924 but if you want to know what happened with the Polar Bear in the following decades, please read our earlier post on Nordisk.

And yes, I could not find many mistakes in our little post after reading this well documented study. 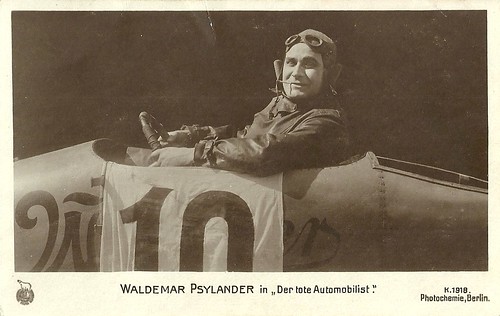 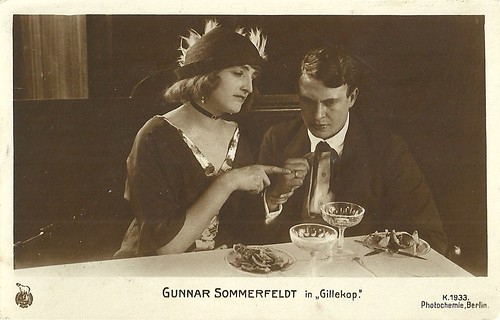 German postcard by Photochemie, Berlin, no. K.1933. Photo: Nordisk Film Co. Gunnar Sommerfeldt in Gillekop (August Blom, 1919). The script was written by Carl-Theodor Dreyer, based on a novel by Harald Tandrup. 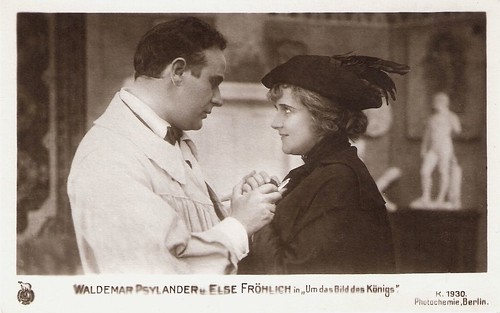 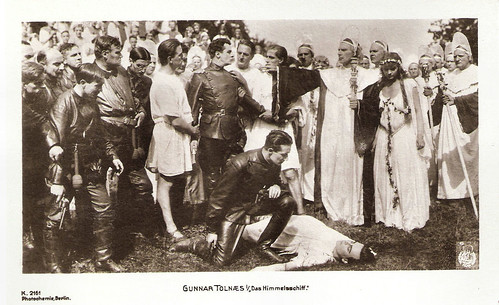 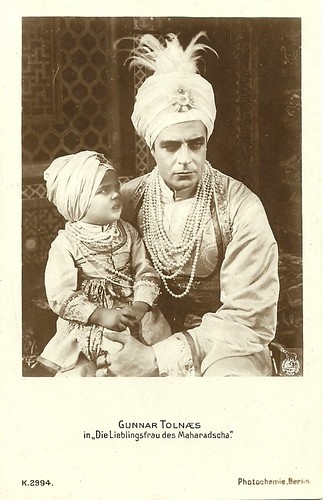 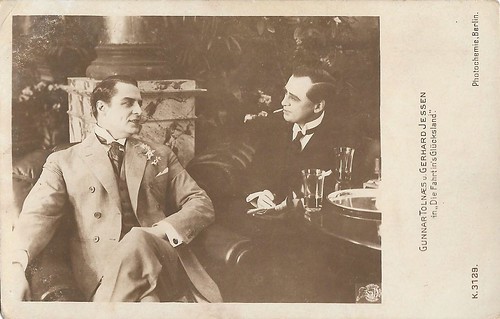 In 1915, Gunnar Tolnaess had moved from Sweden to Denmark, where he was offered a contract at the Nordisk studio. He was immediately successful with Doktor X/Doctor X (Robert Dinesen, 1915). Nordisk hoped that Tolnaes would become as popular as their biggest star, Valdemar Psilander.