Handsome Mexican actor Ricardo Montalban (1920-2009) was the epitome of elegance, charm and grace on film, stage and television. In the late 1940s and early 1950s, he reinvigorated the Latin Lover style in Hollywood without achieving top screen stardom. He fought to upscale the Latin image in Hollywood and this may have cost him a number of roles along the way, but he gained respect and a solid reputation and provided wider-range opportunities for Spanish-speaking actors. Montalban is probably best remembered for his starring role as the mysterious Mr. Roarke on the TV series Fantasy Island (1977–1984), with Hervé Villechaize as his partner Tattoo, and as Grandfather Valentin in the Spy Kids franchise. 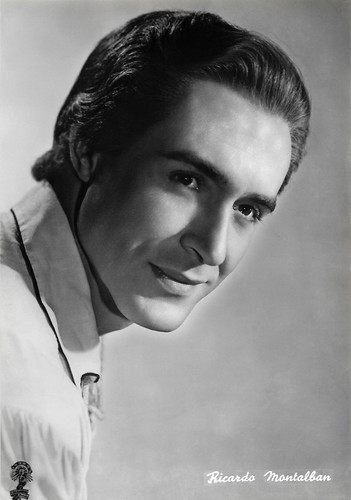 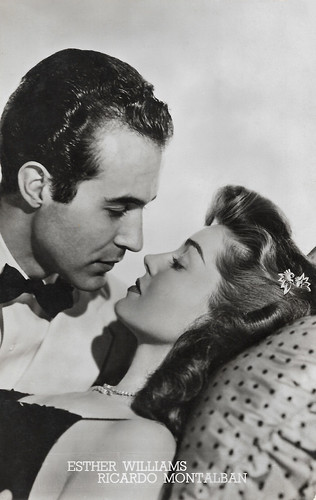 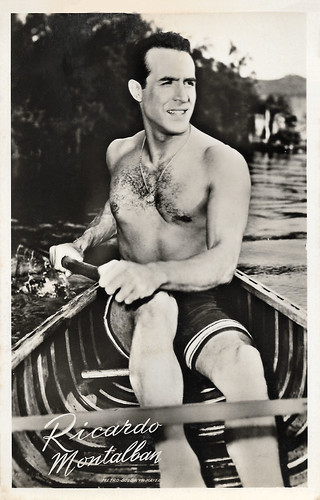 He's a Latin from Staten Island


Ricardo Gonzalo Pedro Montalbán y Merino was born in Mexico City in 1920 and grew up in Torreón. He was the youngest of four children to Castilian Spanish immigrants, Ricarda Merino and Jenaro Montalbán, a dry goods store owner. Montalbán moved to Los Angeles as a teen and lived with his much older brother Carlos Montalbán, who was then pursuing show business as both an actor and dancer.

Ricardo attended Fairfax High School in Hollywood and was noticed in a student play but passed a screen test. In 1940, he travelled with his brother to New York, where he earned a bit part in the Tallulah Bankhead stage vehicle Her Cardboard Lover, and won subsequent roles in the plays Our Betters and Private Affair. In 1941, Montalbán appeared in three-minute musicals produced for the Soundies film jukeboxes. He appeared in many of them as an extra or as a member of a singing chorus, and had the lead role in He's a Latin from Staten Island (1941). Simply billed as 'Ricardo', he played the title role of a guitar-strumming gigolo, accompanied by an offscreen vocal by Gus Van.

Returning to Mexico to care for his ill mother, his dark good looks and magnetic style helped propel him into the Spanish-language film industry. After 13 Spanish-language films, he was on the verge of stardom in Mexico when MGM took an interest in him. Montalban relocated back to Los Angeles. The studio wanted to change his name to Ricky Martin, but he refused.

He made his Hollywood leading debut as a robust bullfighter and twin brother of Esther Williams in the musical Fiesta (Richard Thorpe, 1947), and attracted immediate attention. His second film with Williams, On an Island with You (Richard Thorpe, 1948), led to a contract with the studio. He routinely ignited 'Latin Lover' sparks opposite such female stars as Cyd Charisse, Shelley Winters, Anne Bancroft, Pier Angeli, Laraine Day and (once again) Esther Williams, this time in Neptune's Daughter (Edward Buzzell, 1949).

One of his MGM extravaganzas opposite gorgeous Lana Turner was actually called Latin Lovers (Mervyn LeRoy, 1953). In this musical comedy, he replaced his friendly Latin Lover rival Fernando Lamas, because Lana Turner's real-life affair with Lamas had just reached a tempestuous conclusion. During the 1950s and 1960s, Montalban was one of only a handful of actively working Hispanic actors in Hollywood. He was seldom able to extricate himself from the usual portrayals of gringos, bandidos and gigolos, although he sometimes portrayed other ethnicities – occasionally of Japanese background.

During the filming of Across the Wide Missouri (1951), he suffered a serious injury to his spine after he slipped and fell off a running horse, which resulted in a permanent limp. In 1954, Montalban returned to the stage with varied roles in such fare as Can-Can, The Inspector General, South Pacific and Accent on Youth. In 1955, he made his Broadway debut as Chico in the original musical Seventh Heaven with Gloria DeHaven. He then earned a Tony nomination as the only non-African-American actor in the tropical-themed musical Jamaica (1957) singing several light-hearted calypso numbers opposite Lena Horne. He also toured as the title role in Don Juan in Hell in the 1960s, returning to Broadway with it in 1973 with Agnes Moorehead, and touring once again with the show in 1991. 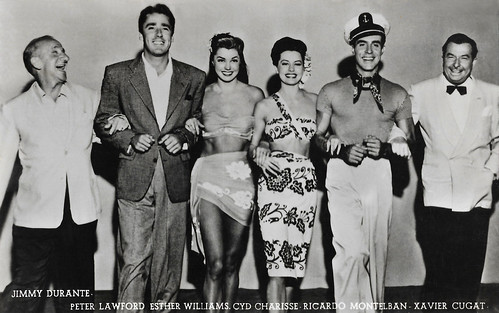 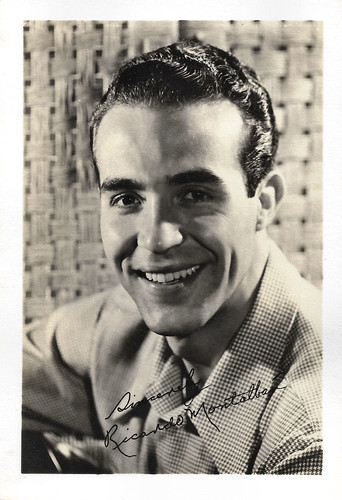 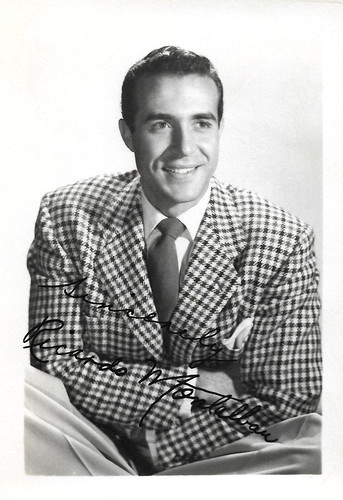 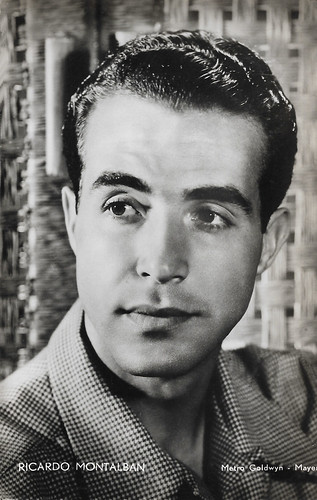 
Ricardo Montalban had a strong work ethic and a reservoir of talent which enabled him to continue on television long after his exotic beefcake status in films had waned. He had married Loretta Young's half-sister Georgiana Young in 1944, and appeared on his sister-in-law's television series The New Loretta Young Show (1962) several times. He also showed up in a number of television dramatic anthologies like Playhouse 90 (1956) and Colgate Theatre (1958), and made guest appearances on the popular series of the day, such as Bonanza (1959), Dr. Kildare (1961), Burke's Law (1963), and Hawaii Five-O (1968). Memorable was a 1967 Star Trek episode in which he portrayed galaxy arch-villain Khan Noonien Singh. He resurrected this character in the film Star Trek II: The Wrath of Khan (Nicholas Meyer, 1982), starring William Shatner and Leonard Nimoy.

Over the years, he continued to appear occasionally on the big screen, typically playing continental smoothies, in such films as Love Is a Ball (David Swift, 1963) starring Glenn Ford, Madame X (David Lowell Rich, 1966) featuring Lana Turner, and Sweet Charity (Bob Fosse, 1969) with Shirley MacLaine, but it was television that finally made him a household name.

Montalban won an Emmy for his role in the miniseries How the West Was Won (1976). He captivated audiences as the urbane, white-suited concierge of mystery Mr. Roarke in the Aaron Spelling series Fantasy Island (1977). He stayed with the series for six seasons, buoyed by his popular 'odd couple' teaming with Hervé Villechaize, who played Mr. Roarke's diminutive sidekick, and fellow greeter, Tattoo.

Gary Brumburgh at IMDb: "While it may have seemed a somewhat lightweight and undemanding role for the talented Montalban, it nevertheless became his signature character. The series faltered after Villechaize, who had become erratic and difficult on the set, was fired from the series in 1983. Corpulent Britisher Christopher Hewett, as Lawrence, replaced the Tattoo character but to little avail and the series was canceled one season later. The troubled Villechaize committed suicide in 1993."

Montalban was a noteworthy villain in the Dynasty (1981) spin-off soap series The Colbys (1985). Montalban was also famous for a series of television commercials in which he returned somewhat to his Latin lover persona. For years in the 1970s, he was a commercial spokesperson for Chrysler Corporation automobiles. Later, he good-naturedly spoofed his Hollywood image in a number of featured parts, including a hilarious send-up of himself in The Naked Gun: From the Files of Police Squad! (David Zucker, 1988), starring Leslie Nielsen. His deep, soothing, confident tones could also be heard in animated features and television series.

Frustrated at Hollywood's portrayal of Mexicans, he helped to found, and gave support to the image-building Nosotros organisation, a Los Angeles theatre-based company designed for Latinos working in the industry. In 1997, Nosotros and the Montalban foundation bought the historic Doolittle Theater in Hollywood, which was built in 1927, and renamed the theatre in his honour in 2004. It became the first major theatre facility (1200 seats) in the United States to carry the name of a Latino performing artist.

In 1980 he, along with Bob Thomas, published his memoir, 'Reflections: A Life in Two Worlds'. Gary Brumburgh: "A class act who was beloved in the industry for his gentle and caring nature, the long-term effects of his spinal injury eventually confined him to a wheelchair in his later years." In 1993, he had a 9 1/2 hour surgical operation on his spine to repair the old back injury. He had been in constant pain ever since. The operation left him paralysed below the waist and requiring the use of a wheelchair. That year, he won a Lifetime Achievement Award from the Screen Actors Guild.

Montalban continued to perform, providing voices for animated films and supporting his Nosotros foundation. Two of his final film roles were as the grandfather in the two Spy Kids sequels: Spy Kids 2: Island of Lost Dreams (Robert Rodriguez, 2002) and Spy Kids 3: Game Over (Robert Rodriguez, 2003). Rodriguez created the role specifically for Montalban, which included the use of a jet-propelled wheelchair.

Ricardo Montalban died in his Los Angeles home of complications from old age in 2009 at the age of 88. His wife, Georgiana Young, had died in 2007, and he was survived by their two daughters and two sons: Laura, Anita, Victor and Mark. Montalban was interred with his wife at Holy Cross Cemetery in Culver City, California. 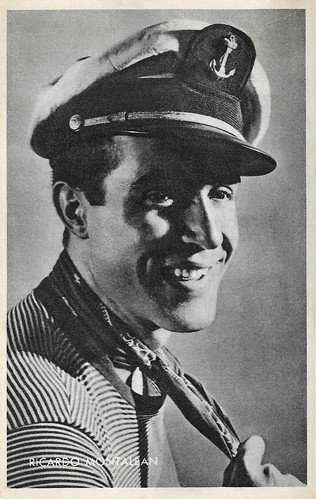 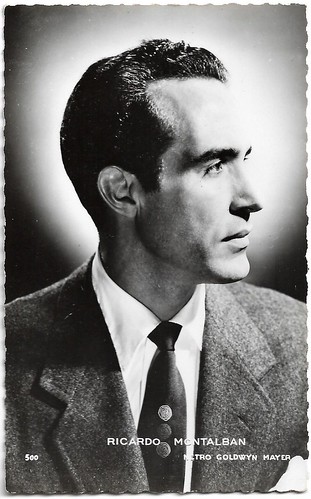 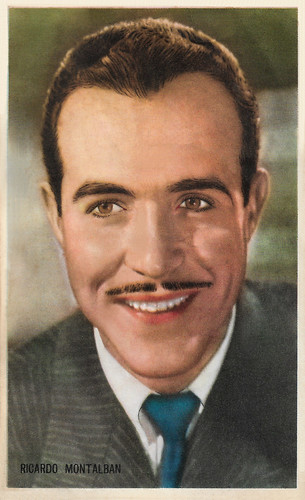 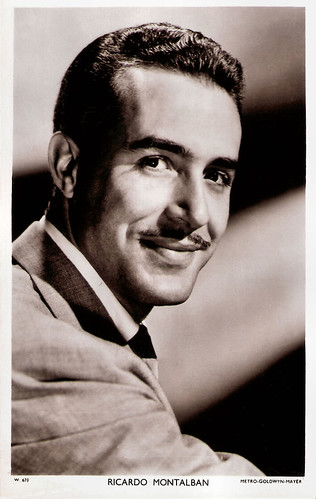