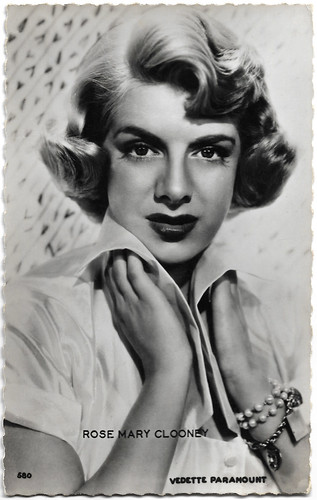 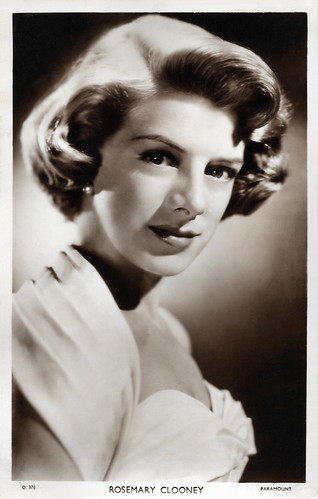 
Rose Mary Clooney was born in Maysville, Kentucky, in 1928. She was one of five children of Marie Frances (Guilfoyle) and Andrew Joseph Clooney. Her childhood was a difficult one; her father was an alcoholic, and her mother's job required extensive travelling, so Clooney and her siblings were shuffled back and forth between both parents and assorted relatives.

Rosemary grew up idolising Billie Holiday. She and her younger sister Betty Clooney used to sing in her grandfather's mayoral election campaigns in Maysville, which he won three times. When Clooney was 13, her mother remarried and moved to California, taking Clooney's brother Nick (later an actor and TV host) and leaving Rosemary and Betty in the care of their father.

At first, he supported the girls by working in a defense plant, but his troubles got the better of him, and he abandoned them at the end of World War II. At first, Clooney and her sister supported themselves by collecting cans and bottles, and entered amateur talent contests as a singing duo.

They were saved from poverty (and likely eviction) when they successfully auditioned for a Cincinnati radio station WLW later in 1945. On WLW she worked with band leader Barney Rapp, who had also worked with Doris Day and Andy Williams at the same station.

She attended high school at Our Lady of Mercy in Cincinnati. In 1946 she appeared with her sister in Atlantic City, New Jersey, at the Steel Pier with Tony Pastor's band, billed as the Clooney Sisters. In 1946, Rosemary cut her first solo record, 'I'm Sorry I Didn't Say I'm Sorry (When I Made You Cry Last Night)'.

In 1948, she began to work as a solo artist, when Betty decided to stop touring with Pastor and return to Cincinnati. Clooney stayed with Pastor for another year before heading to New York in 1949 and signing a solo record contract with Columbia. Most of Clooney's earliest records for Columbia were children's songs, but in 1951 she began working with producer/A&R man Mitch Miller.

Miller pushed Clooney to record novelty numbers, specifically an Italian-dialect song called 'Come On-a My House' that had been co-written by Armenian-American cousins William Saroyan and Ross Bagdasarian (the latter would go on to fame as creator of the Chipmunks). Clooney hated the song and held out for weeks before finally giving in.

Despite her lifelong distaste for it, 'Come On-a My House' was a huge success. It sold over a million copies and topped the charts in 1951, instantly making Clooney a household name. Her other top hits include 'Tenderly', 'This Ole House' and 'Half As Much' in 1952, and 'Hey There' in 1954.

Steve Huey at AllMusic: "She wasn't an improviser or a technical virtuoso, and lacked the training to stand on an equal footing with the greatest true jazz singers. However, she sang with an effortless, spirited swing, and was everything else a great pop singer of her era should have been. Her phrasing and diction were flawless, and her voice was warm, smooth, and relaxed; moreover, she was a sensitive and emotionally committed interpreter of lyrics."

Paramount had decided to groom Clooney for film stardom, and she made her screen debut in The Stars Are Singing (Norman Taurog, 1953). Clooney also performed in other film musicals such as Here Come the Girls (Claude Binyon, 1953) and Red Garters (George Marshall, 1954) with Guy Mitchell and Jack Carson. And she appeared in the popular White Christmas (Michael Curtiz, 1954), co-starring opposite Bing Crosby and Danny Kaye. 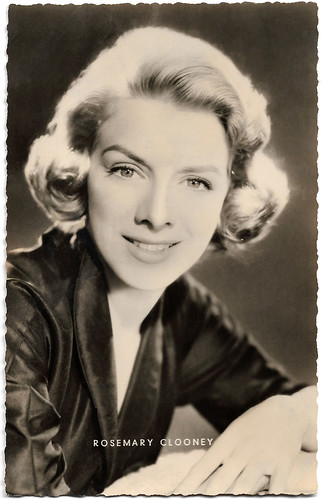 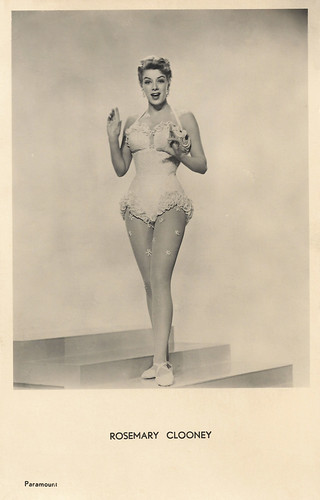 The frantic pace of her career, coupled with her suddenly large family, took a heavy toll on Clooney. She became addicted to prescription drugs in the 1950s. Clooney's marriage to Ferrer was a tempestuous one. They wed and divorced twice, and were married from 1953 to 1962 and from 1964 to 1967. The marriage again crumbled while Ferrer was carrying on an affair with the woman who would become his last wife, Stella Magee.

In 1968 she was standing in the Ambassdor Hotel in Los Angeles with Roosevelt Grier when good friend Robert F. Kennedy was murdered in the hotel kitchen after she had participated in his campaign rally. She heard the shots when he was assassinated. A month later, she had a nervous breakdown onstage in Reno, Nevada, and was institutionalised in the psychiatric ward of L.A.'s Mount Sinai Hospital. She remained in psychoanalytic therapy for eight years afterwards.

In 1976, her sister Betty died suddenly of a brain aneurysm. In 1983, Rosemary and her brother Nick co-chaired the Betty Clooney Foundation for the Brain-Injured, addressing the needs of survivors of cognitive disabilities caused by strokes, tumours, and brain damage from trauma or age.

Rosemary's career revived in 1977, when her White Christmas co-star Bing Crosby asked her to appear with him at a show marking his 50th anniversary in show business. The tour put Clooney back in the public eye, and the following year she published a confessional autobiography, 'This for Remembrance', and signed a new record deal with Concord Jazz.

Her life was dramatised in a 1982 made-for-television film, Rosie: the Rosemary Clooney Story (Jackie Cooper, 1982), which starred Clint Eastwood's then-girlfriend Sondra Locke. A steady stream of albums - usually one per year, occasionally two - followed all the way through the 1990s. She performed annually at the 'Rosemary Clooney Music Festival' in her hometown of Maysville, Kentucky.

Her son Gabriel married singer Debby Boone, daughter of 1950s pop singer Pat Boone. Her brother, Nick Clooney, was an ABC news anchor in Cincinnati, and his son George Clooney has developed into one of the biggest film stars of the 21st century. When Rosemary married Dante DiPaolo in 1997, her nephew George, according to rumour, did not attend, as he "did not wish to steal away the spotlight" on his aunt's special day. Clooney published a second autobiography, 'Girl Singer', in 1999, and gave what proved to be her last live performance in December 2001. She received the Grammy Lifetime Achievement Award in 2002.

In 2002, Rosemary Clooney died of lung cancer in her home in Beverley Hills. In 2005, her Augusta, Kentucky home was partially transformed into the Rosemary Clooney Museum. Current owner/part-time resident Heather Renee French Henry (Miss America 2000) spearheaded the creation of the museum which amasses a large amount of memorabilia from Clooney's film, television and recording career. 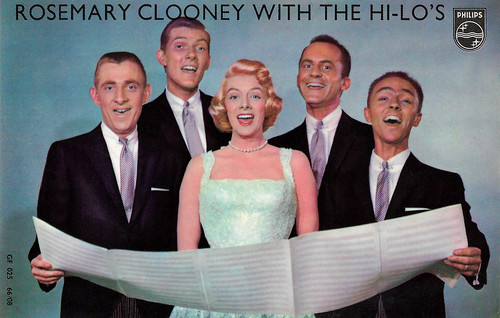