Last Friday, 19 July 2019, Rutger Hauer has passed away at his home in Beetsterzwaag, following a short illness. The blonde, blue-eyed, tall and handsome Dutch actor played everything - from romantic leads to action heroes to sinister villains. During the 1970s, he had his international breakthrough with the Dutch films by Paul Verhoeven and later he became a cult star with Blade Runner (1982), The Hitcher (1986) and Blind Fury (1989). Before that he was the hero of many Dutch kids in the classic TV series Floris (1969), also directed by Paul Verhoeven. Hauer was 75.

A bit of a rebel

Rutger Oelsen Hauer was born in Breukelen, the Netherlands in 1944 in a family of actors. His parents, Arend Hauer and Teunke Hauer-Mellema, operated an acting school in Amsterdam. Because both his parents were often off working, he and his three sisters were raised by a nanny.

A bit of a rebel during his childhood, he chafed at the rules and rigours of school and was often getting into mischief. His grandfather had been the captain of a schooner and at age 15, Hauer ran away to work on a freighter for a year. Upon his return he attended night school and started working in the construction industry. When he again bombed at school, his parents enrolled him in drama classes.

He then worked five years for the Noorder Compagnie, a Dutch stage company. His screen career began in 1969 as the hero in the popular Dutch television series Floris (Paul Verhoeven, 1969), a medieval action drama. The role of the dashing knight made him famous in the low countries, and Hauer reprised his role for the German remake Floris von Rosemund (Ferry Radax, 1975).

Hauer was invited to make his English-language debut in the British film The Wilby Conspiracy (Ralph Nelson, 1975) opposite Sidney Poitier and Michael Caine. Set in South Africa, the film was an action-drama with a focus on apartheid. Hauer's supporting role, however, was barely noticed in Hollywood, and he returned to Dutch films.

Hauer reunited with Monique van de Ven and Paul Verhoeven for Keetje Tippel/Katie Tippel (1975). He worked again with Verhoeven on Soldaat van Oranje/Soldier of Orange (1977), and Spetters (1980), both with Jeroen Krabbé. Especially Soldaat van Oranje was a huge success and was instrumental in his international breakthrough.

After making a television series and five films directed by Paul Verhoeven, they had a falling-out on their last combined effort, the troubled Flesh+Blood (1985). The two would never work again. According to IMDb, Hauer turned down roles in both Verhoeven’s Robocop (1987) and Zwartboek/Blackbook (2006). 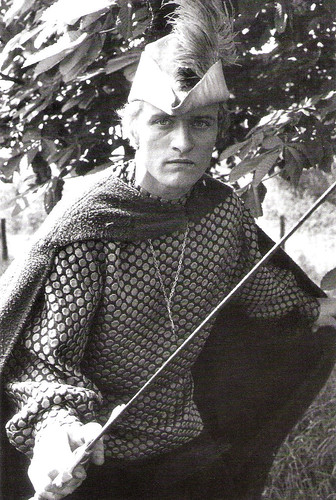 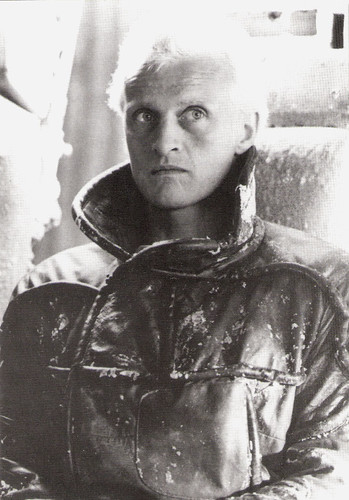 Rutger Hauer made his American debut in the Sylvester Stallone film Nighthawks (Bruce Malmuth, 1981) as a psychopathic and cold-blooded terrorist named Wulfgar. The following year, he appeared in arguably his most famous and acclaimed role as the eccentric and violent but sympathetic anti-hero Roy Batty in the Science-Fiction thriller Blade Runner (Ridley Scott, 1982), in which role he improvised the famous tears in rain soliloquy.

Hauer went on to play the adventurer courting Theresa Russell in Eureka (Nicolas Roeg, 1983), the investigative reporter opposite John Hurt in The Osterman Weekend (Sam Peckinpah, 1983), and the knight paired with Michelle Pfeiffer in Ladyhawke (Richard Donner, 1985). He continued to make an impression on audiences in The Hitcher (Robert Harmon, 1986), in which he played a mysterious hitchhiker intent on murdering a lone motorist and anyone else in his way.

During the late 1980s and early 1990s, Rutger Hauer became well known to the British public for a series of humorous Guinness commercials where he is clad in black. His appearance is credited for an increase in sales of Guinness. 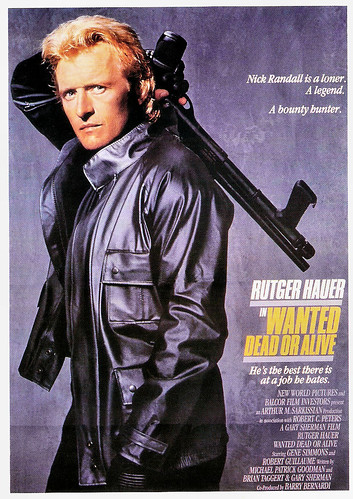 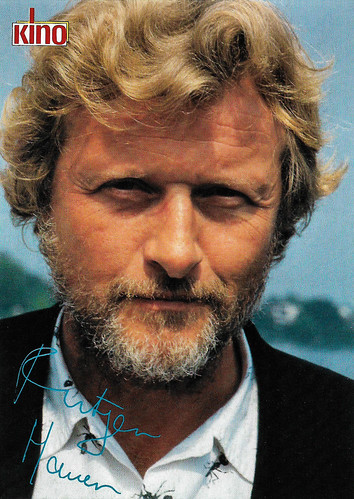 After years of mainly television and straight-to-video movies, Rutger Hauer made a kind of come-back to the cinema in the new century. He played an assassin in Confessions of a Dangerous Mind (George Clooney, 2002), a villainous cardinal with influential power in