At the last VerzamelaarsJaarbeurs, the International Collectors Fair in Utrecht, we found a curiosity. Pages of a Dutch film calendar, from ca. 1930, with some unusual stars. When we bought the pages, the seller told us that the calendar had been part of his father's film memorabilia. Dad even had kept a newspaper article on the death of Heinz Rühmann with the calendar page of the German comedian. In this post we first place the picture (which was a separate part of the calendar page), than the page with the picture, plus a translation of the text on the film star. 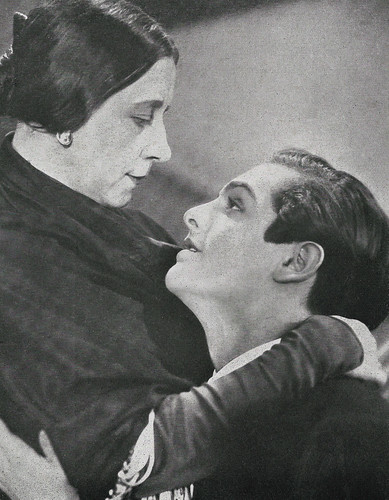 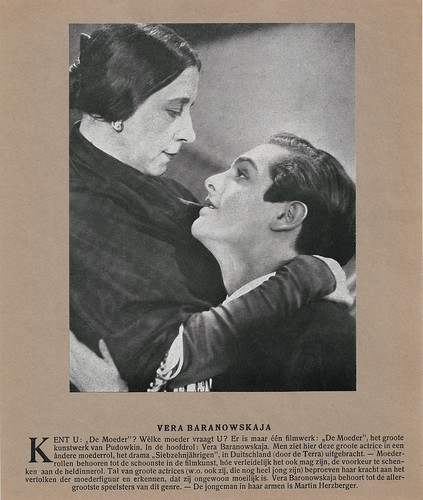 Do you know The Mother? What mother are you asking? There is only one film work The Mother, the great work of art by Pudowkin. In the leading role: Vera Baranovskaya. You can see this great actress in another mother role, the drama Siebzehnjarigen, released in Germany (by the Terra). - Mother roles are among the most beautiful in film art, however tempting it may be to give preference to the heroine role. Numerous major actresses (including those who are still very young) test her strength in playing the mother role and acknowledge that she is unusually difficult. Vera Baranovskaya is one of the greatest players of this genre. - The young man in her arms if Martin Herzberger. 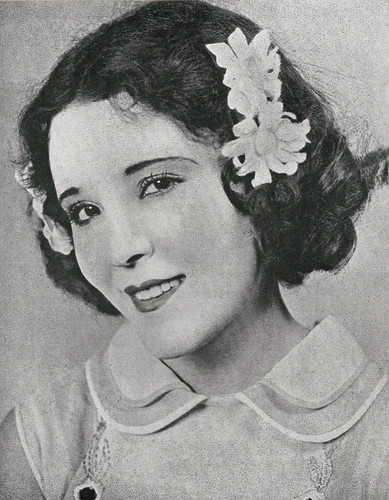 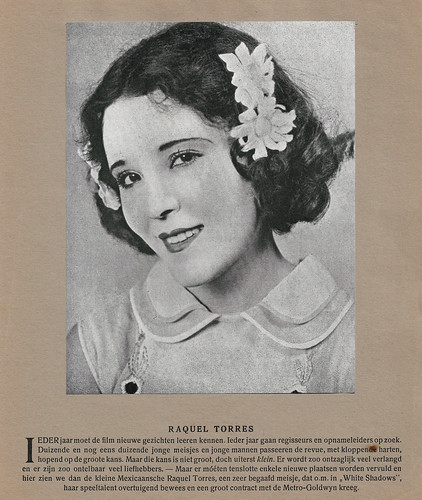 Every year, the film has to get to know new faces. Every year, directors and production managers look for them. Thousands and thousands of young girls and young men pass by, with beating hearts, hoping for the big chance. But that chance is not great, but extremely small. So much is required and there are so many enthusiasts. - But after all, a few new places have to be filled and here we see the little Mexican Raquel Torres, a very gifted girl, who proved her acting talent convincingly in, among other things, White Shadows, and received a large contract with the Metro-Goldwyn. 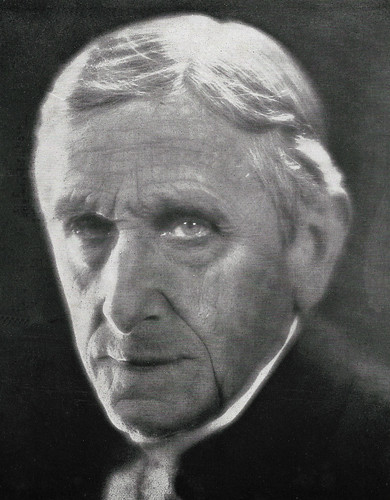 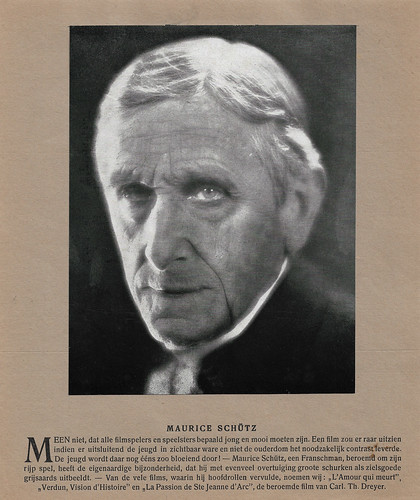 Don't think that all film players must be young and beautiful. A film would look strange if only young people were visible in it and not old age to provide the necessary contrast. This makes the youth so thriving. - Maurice Schütz, a Frenchman, famous for his mature acting, has the peculiar characteristic that he portrays villains as much as good old greats with the same conviction. Of the many films in which he played the lead, we mention L'amour qui meurt, Verdun, Vision d'Histoire and La Passion de Jeanne d"Arc, the famous film by Carl Th. Dreyer. 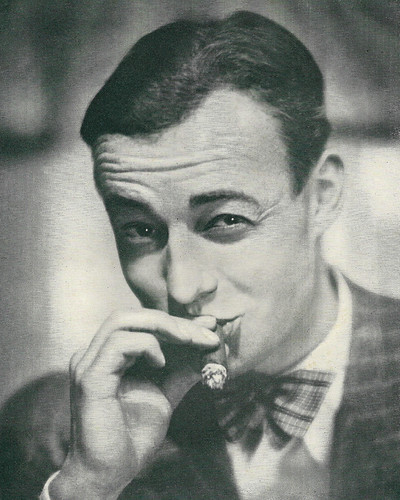 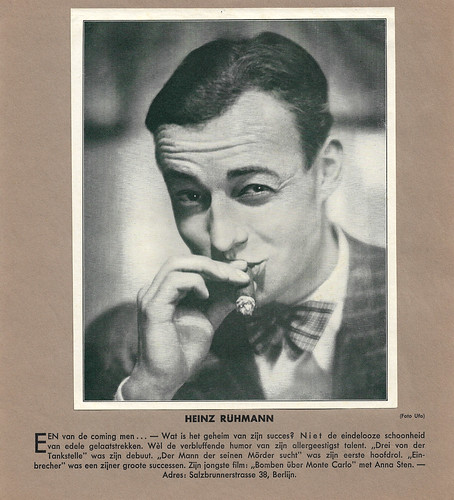 Heinz Rühmann. One of the coming men ... - What is the secret of his success? Not the endless beauty of his noble features. The astounding humor of his most talented talent. Drie von der Tankstelle was his debut. Der Mann der seinem Mörder sucht was his first leading role. Einbrecher was one of his first major successes. His latest film: Bomben auf Monte Carlo, with Anna Sten. - Address: Salzbrunnerstrasse 38, Berlin. 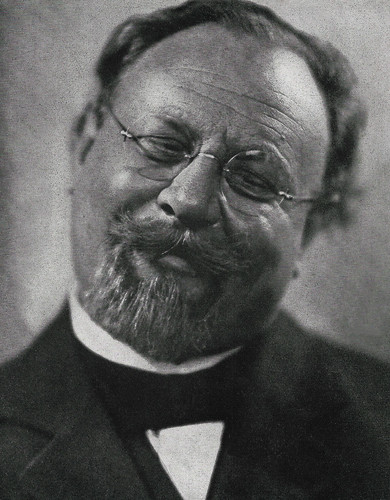 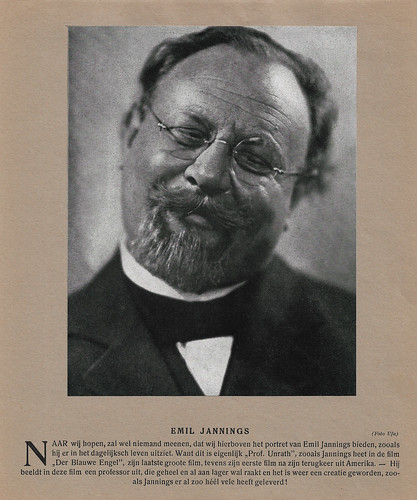 We hope that no one will think that we offer the portrait of Emil Jannings as he looks in daily life above. Because this is actually Prof. Unrath, as Jannings is called in the film Der blaue Engel, his last major film and also his first film after his return from America. - In this film, he portrays a professor who is completely on the verge of falling, and it has again become a creation like Jannings has already delivered so much. 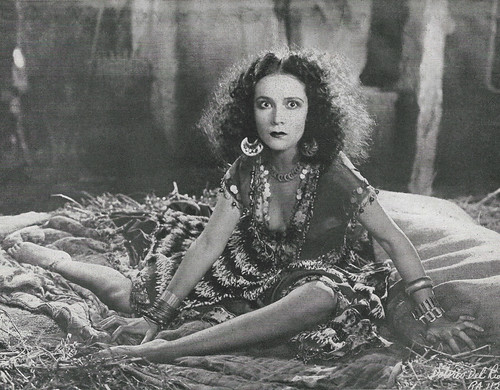 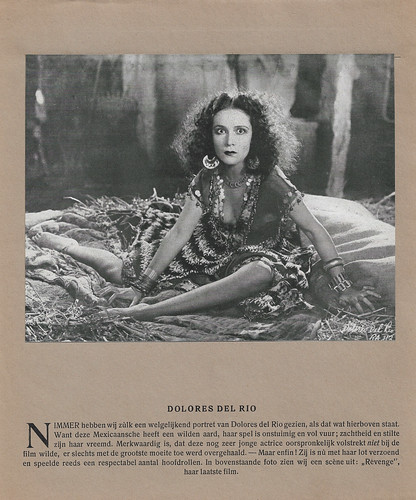 We have never seen such a similar portrait of Dolores del Rio as the one above. Because this Mexican has a wild nature, her game is boisterous and full of fire; softness and silence are strange to her. It is remarkable that this very young actress originally did not want to enter into the film business, she was only persuaded with great difficulty. - But anyway, she is now reconciled with her destiny and has already played a respectable number of leading roles. In the photo above we see a scene from Revenge, her latest film. 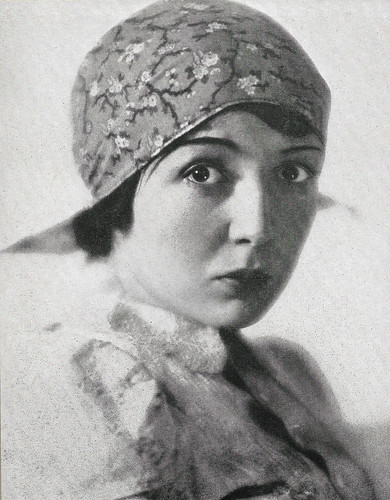 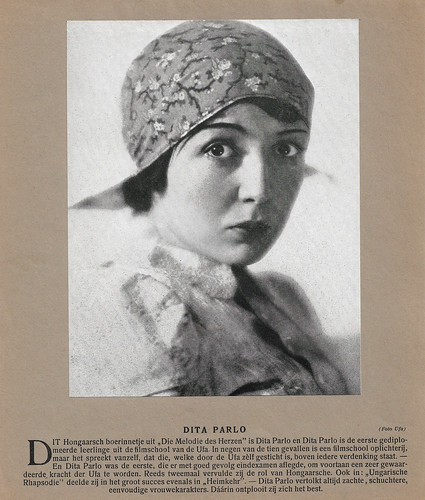 This Hungarian peasant girl from Die Melodie des Herzens is Dita Parlo and Dita Parlo is the first graduate student from the Ufa film school. In nine out of ten cases, a film school is a scam, but it goes without saying that this school, founded by the Ufa itself, is above every suspicion. - And Dita Parlo was the first to successfully complete her final exams, to become a highly valued power of the Ufa from now on. Already twice she played the role of a Hungarian. Also in Ungarische Rhapsodie, she shared in the great success, as well as in Heimkehr. - Dita Parlo always plays soft, timid, simple female characters. She develops best in these parts.