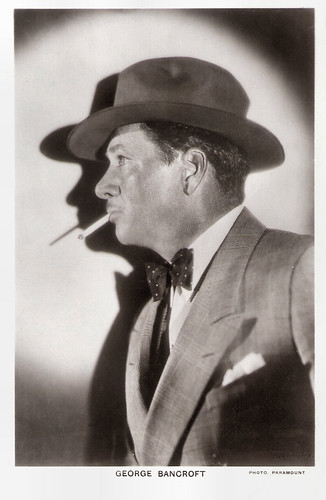 British postcard in the Picturegoer Series, London, no. 432a. Photo: Paramount. 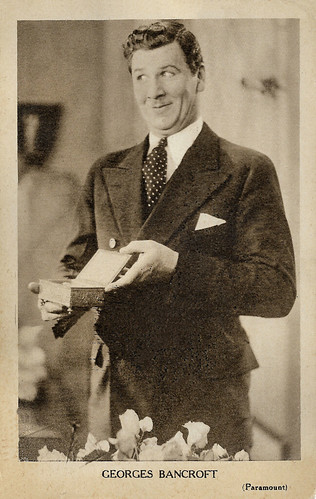 A natural for heavies


George Bancroft was born in 1882 in Philadelphia, Pennsylvania. He attended high school at Tomes Institute in Port Deposit, Maryland.

After working on merchant marine vessels at age 14, Bancroft was an apprentice on the USS Constellation and later served on the USS Essex in the West Indies. Additionally, during the Battle of Manila Bay (1898), he was a gunner on the USS Baltimore. During his days in the Navy, he staged plays aboard ship.

In 1900, he swam underneath the hull of the battleship USS Oregon to check the extent of the damage after it struck a rock off the coast of China. For this, he won an impressive appointment to the United States Naval Academy at Annapolis. He graduated as a commissioned officer, and served in the Navy for the prescribed period of required service but no more.

He decided to turn to show business, first as a theatre manager. In 1901, Bancroft began acting in earnest, as he toured in plays and had juvenile leads in musical comedies. In vaudeville, he did blackface routines and impersonated celebrities. By 1923, he was good enough for Broadway and spent about a year there doing two plays, the musical comedies 'Cinders' (1923) and 'The Rise of Rosie O'Reilly' (1923).

Two years earlier, he had already made his first appearance in the silent film The Journey's End (Hugo Ballin, 1921). Being a big man with dark features, he was a natural for heavies. And it seemed that early Westerns were an easy fit as well after his first four films. Through 1924 and into 1925, he did four, culminating with pay dirt in his appealing performance as rogue Jack Slade in the silent Western The Pony Express (James Cruze, 1925). With him was another up-and-coming character actor, Wallace Beery.

Bancroft's acting made Paramount Pictures take a look at him as star material. He played an important supporting role in a cast including Wallace Beery and Charles Farrell in the period naval widescreen epic Old Ironsides (James Cruze, 1926). 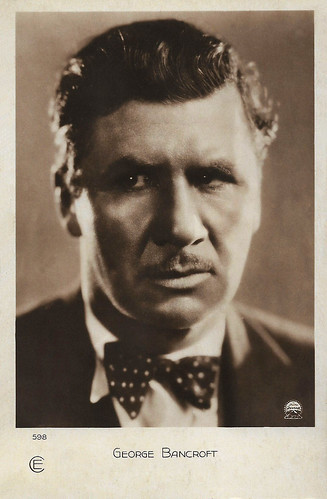 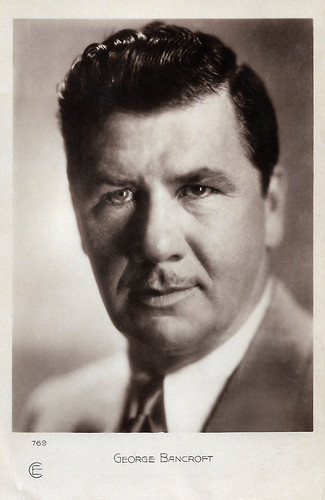 His various on-screen personas as a bigger-than-life strongman was not far from his off-screen character as Hollywood notability got to him. It was recalled that he became more difficult to deal with as his ego grew. William McPeak at IMDb: "At one point, he refused to obey a director's order that he fall down after being shot by the villain. Bancroft declared, 'One bullet can't kill Bancroft!'"

He stayed busy through the 1930s as older and stouter featured characters. Bancroft was getting competition from younger character actors. In the early 1930s, his roles continued to typecast him as lead heavies, but increasingly, he was cast as second tier in later roles. He was paper editor MacWade in Mr. Deeds Goes to Town (Frank Capra, 1936), starring Gary Cooper and Jean Arthur, a doctor in A Doctor's Diary (Charles Vidor, 1937), a contractor in Angels with Dirty Faces (Michael Curtiz, 1938) with James Cagney and Humphrey Bogart, and a warden in Each Dawn I Die (William Keighley, 1939) with Cagney and George Raft.

Most memorably is his Marshal Curly Wilcox in the classic Western Stagecoach (John Ford, 1939), opposite John Wayne. Here he is particularly engaging as a tough lawman with a big heart.

Into the 1940s, he only did a handful of films. But he again had a rogue's spotlight with another name director, Cecil B. DeMille, in one of his epics. He played a Texas Ranger chasing a murderer over the Canadian border in North West Mounted Police (Cecil B. DeMille, 1940) with a stellar cast including Gary Cooper, Madeleine Carroll, and Paulette Goddard as fleeing criminal, Jacques Corbeau's (Bancroft) daughter.

By 1942, Bancroft had decided to move on, retiring with the intention of becoming a Southern California rancher. He quietly assumed this new role for a long run of 14 years before his death. George Bancroft passed away in 1956 in Santa Monica, California. He was married twice, first to Edna Brothers, and after their divorce to silent film actress Octavia Broske. They had a daughter Georgette. 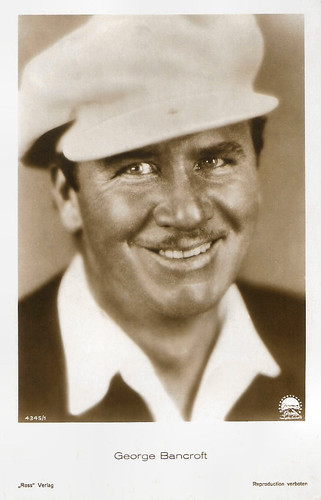 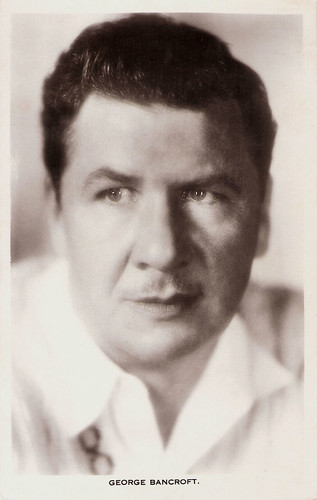 British postcard in the Picturegoer Series, London, no. 432. 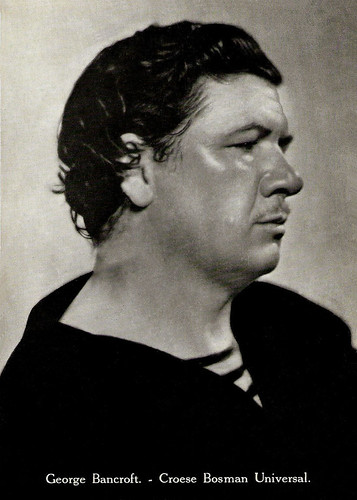