The Geschwister Jacob or Jacob Sisters was a group of four, later three German sisters who sang Schlager songs. The sisters were Johanna (1939-2015), Rosi (1941), Eva (1943) and Hannelore Jacob (1944-2008). After Hannelore Jacob's death, but also occasionally in earlier times, the group appeared as a trio. 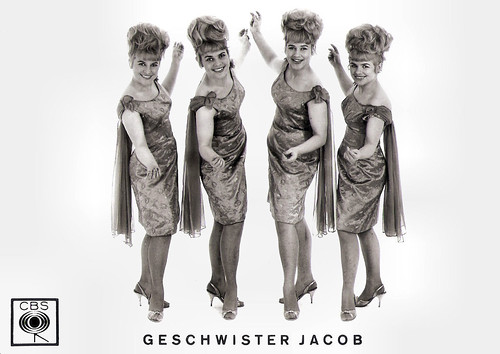 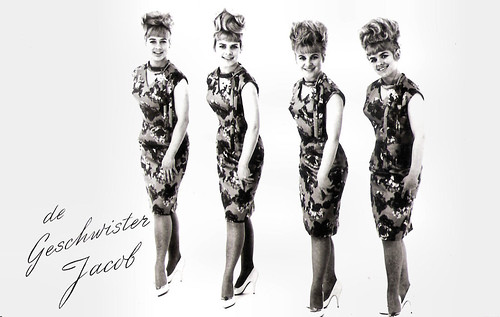 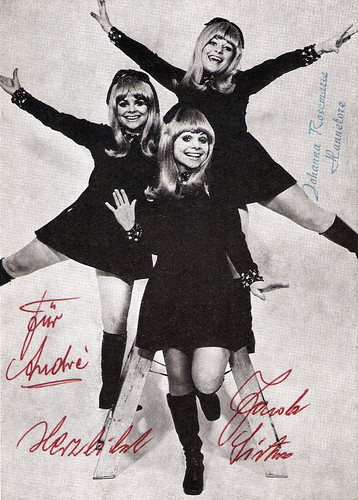 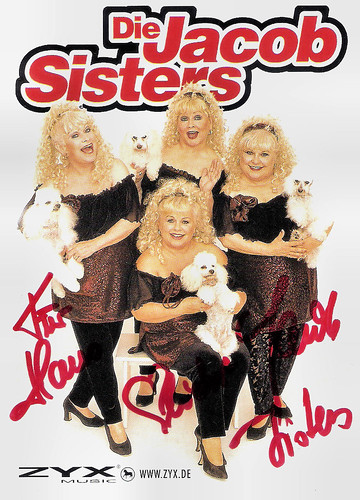 Already in childhood they started their common career as the 'Schmannewitzer Heidelerchen' in the Café Jacob in Schmannewitz. Later, they appeared in and around Leipzig. They attended the Musikhochschule Weimar (Weimar Music Academy), moved to the Federal Republic in 1958 and continued their studies in Frankfurt am Main.

Lia Wöhr gave them an appearance on the television program Zum Blauen Bock. In 1963 they had their greatest success in Germany with the 'Gartenzwerg-Marsch' (Garden gnome march), a cover version of a song of British singer Billy Sanders. At that time they still called themselves the Geschwister Jacob.

In 1966 they took part in the German Schlager Festival. Their song 'So ist ein Boy' came in at the eights place. Their biggest international successes have been appearances in Las Vegas and New York in the 1960s. There they performed with Louis Armstrong, Sammy Davis Jr. and Duke Ellington. From then on, they called themselves Jacob Sisters.

During the 1960s, they also performed in several films, such as Dr. Murkes gesammelte Nachrufe/Dr. Murkes collected obituaries (Rolf Hädrich, 1965) with Dieter Hildebrandt and Dieter Borsche, and the comedy Quartett im Bett/Quartet in Bed (Ulrich Schamoni, 1968). For their performances in the latter film they won the Ernst Lubitsch Preis. 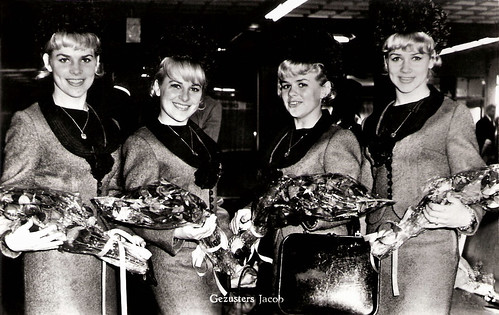 Dutch postcard by Gebr. Spanjersberg N.V., Rotterdam (SPARO), no. 1245. The Jacob Sisters at Schiphol during their visit to the Netherlands in 1965. 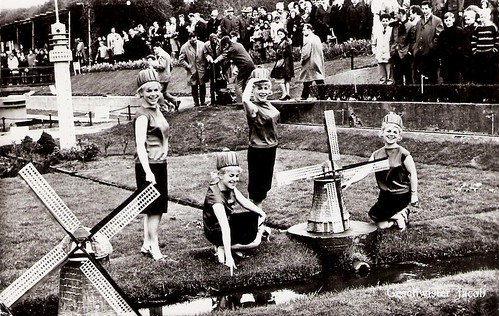 Dutch postcard by Hercules, Haarlem, no. 1350 A. Photo: CBS. The Geschwister Jacob during a visit of miniature town Madurodam in Den Haag (The Haghe), The Netherlands. 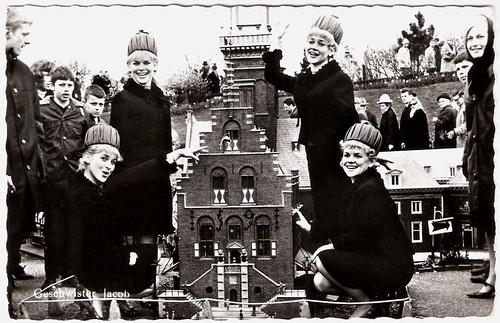 Dutch postcard by N.V. v.h. Weenenk & Snel, Baarn. Sent by mail in 1966. Photo: CBS. The Jacob Sisters during a visit of miniature town Madurodam in The Haghe. 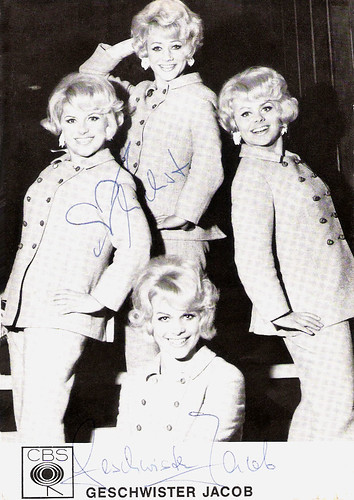 
Through the years, the Jacob Sisters became a hilarious cult phenomenon. Their songs included parodies on hits like 'Sonderzug nach Pankow', 'Pariser Tango' and 'Yes Sir, I Can Boogie'. At the end of the 1990s and the beginning of the 2000s, the Jacob Sisters appeared several times as star guests at the Madame Lothár Theater in Bremen, where they also took part in a gala show in June 2002 on the occasion of the tenth anniversary of the theatre.

They often appeared on German television and radio, especially in folk music programs such as in the TV series Feste der Volksmusik, Lieder sind die besten Freunde (Songs are the best friends) and Musikantenstadl, but also in many other shows. They also persormed in the TV series Ein Heim für Tiere/The Adventures of Dr. Bayer (1987) and the Krimi series Die Kommissarin/Lady Cop (1995), featuring Hannelore Elsner.

With the Techno song 'The Hampster Dance' (2001), the four sisters even reached the top of the Canadian charts. They also appeared in the film comedy Ausziehn!/Undress! (Peter Morlock, 2001) with Désirée Nick and Evelyn Künneke, and in the TV series Polly Adler (2008).

In 2008 Hannelore Jacob died of heart failure as a result of pneumonia. In 2011 Eva Jacob participated in the 5th season of the RTL show Ich bin ein Star – Holt mich hier raus! (I am a star - get me out of here!).

Johanna Jacob died on in 2015 in Sana Klinikum Offenbach from the effects of a stroke. She was buried next to her sister Hannelore on the forest cemetery Buchenbusch. The remaining Jacob sisters, Eva and Rosi are still going strong. 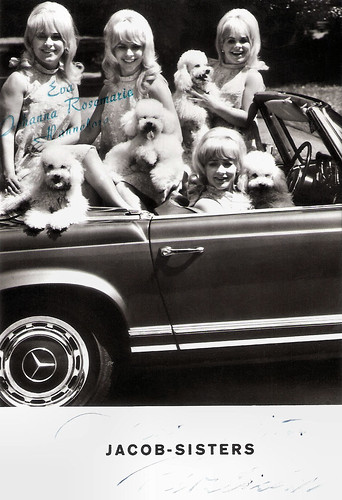 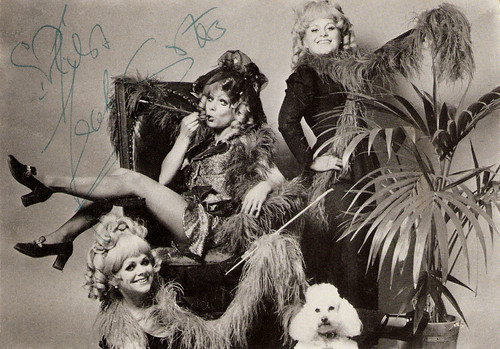 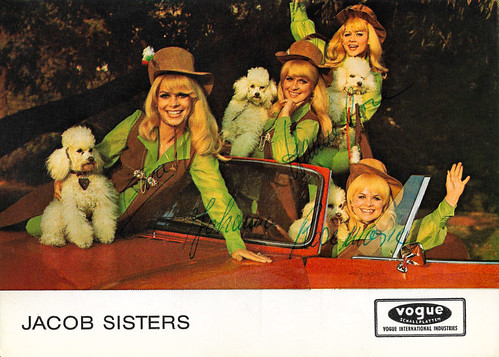 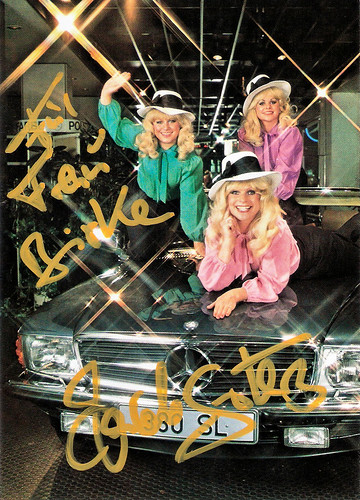