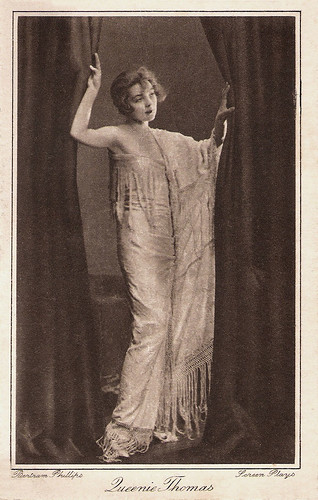 During the First World War she also appeared in leading roles in several more silent films, such as Frills (Bertram Phillips, 1916), and What Would a Gentleman Do? (Wilfred Noy, 1918).

In 1919 Queenie Thomas was married to George Newman. After their wedding ceremony at St. Margaret's Church in Westminster they had an ‘aerial honeymoon’, while they flew from London to Paris. Warch this Pathé Gazette clip about their flight. 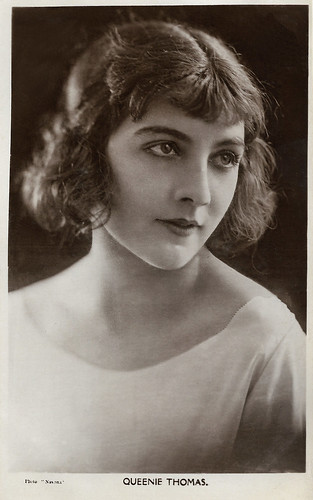 British postcard in the Picturegoer Series, London, no. 73. Photo: Navana.


During the early 1920s, the film appearances of Queenie Thomas were less frequently. She returned to the screen in the comedy Tut-Tut and His Terrible Tomb (Bertram Phillips, 1923). It was one of six episodes in the Syncopated Picture Plays 2-reel series.

Another series in which she appeared was the Rainbow comedy series, produced by the company of Bertram Phillips and directed by Bernard Dudley.

She also played in crime dramas, such as Her Redemption (Bertram Phillips, 1924) with John Stuart, and The Last Witness (Fred Paul, 1925) starring Isobel Elsom. In the comedy Safety First (Fred Paul, 1926) she starred with Brian Aherne.

At the end of the 1920s there was a new hiatus in her film career and then she played in her last film, the late silent production Warned Off (Walter West, 1930). 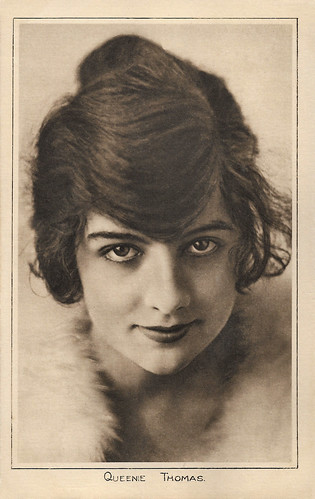 British postcard in the 'Pictures' Portait Gallery' by Pictures Ltd., London, no. 57.