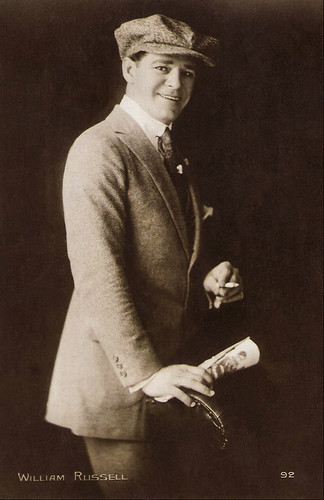 French postcard by Editions Cinémagazine, no. 92.

William Russell was born William Francis Lerche, in the Bronx, New York, in 1884.

As his mother was a highly regarded stage actress, Russell already at the age of eight starting acting on stage. He performed with such classic actors as Ethel Barrymore, but this career stopped when he was 16 and became an invalid. Thanks to rigorous physical therapy, he became well after six years and became an amateur boxing champion.

In 1910 he started to act in New York at the Biograph company. After nine months, he switched over to the Thanhouser company, where his brother Alfred directed him in several films. His star status grew, and he performed in David Copperfield (1911) and The Star of Betlehem (1912), the latter with Florence LaBadie and James Cruze.

With LaBadie and Cruze, Russell switched to Mutual in 1913, where he acted in several films till 1916. In 1917 he moved to the American Film company, which films were distributed by Pathé Exchange.

Under the aegis of American, Russell started his own company William Russell Productions, for which he made films such as Hobbs in a Hurry (1918), Hearts or Diamonds (1918), Up Romance Road (1918), Brass Buttons (1919), When a Man Rides Alone (1919), and Where the West Begins (1919); all directed by Henry King. Often these were Western comedies, with e.g. Eileen Percy, Winifred Westover, and Charlotte Burton. He married the latter in 1917 but they divorced four years later.

In 1919 Russell moved to California, to start working for Fox Film, where he debuted in The Lincoln Highwayman (Emmett J. Flynn, 1919). By then Russell was a star, and his films were draped around his star persona. The posters for his films confirm this. His former co-star Eileen Percy had moved with him to Fox, and they acted together in Leave It to Me (Emmett J. Flynn, 1920). 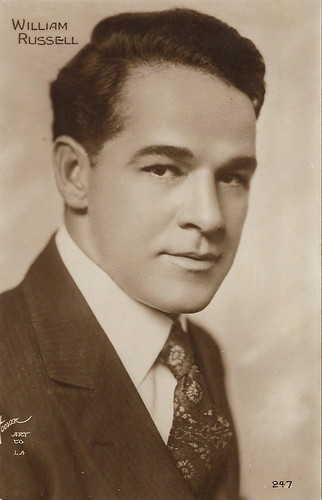 William Russell co-acted with actress Helen Ferguson in e.g. Show with Fire (Emmett J. Flynn, 1920). The two married in 1921. At Fox, Russell made seven to eight films a year between 1919 and 1923, with directors such as Flynn and Scott Dunlap. and expanding his western hero reputation with other genres such as modern dramas and comedies.

In 1923, Russell had the male lead as Matt Burke, the rough sailor, in the First National production Anna Christie, directed by John Griffith Wray and Thomas Ince, and with Blanche Sweet in the title role. The film, faithful to Eugene O'Neill's play, was a fine film with a great part for Sweet. Unjustly, the film has come to stay in the shadow of its later 1930 sound version with Greta Garbo. Presumed lost, the film was found in Russia and it is now available with English Intertitles. Eugenie Besserer plays the old alcoholic, played by Marie Dressler in the sound version.

From then on, Russell freelanced with various Californian companies such as Vitagraph, Universal, Fox, and others. It also meant he was often an antagonist of the female or male lead, e.g. in The Blue Eagle (John Ford, 1926).

In 1927 Russell started to act in series of films at Warner Brothers, first in The Desired Woman (Michael Curtiz, 1927), in which he was the costar of Irene Rich. By now, he was often cast as tough gangster opposite the leads, as in Brass Knuckles (Lloyd Bacon, 1927), though he also was a sergeant in the frozen North woods in Danger Patrol (Duke Worne, 1928).

While Russell was in a part-talkie, The Midnight Taxi (John G. Adolfi, 1928), his first and practically only full dialogue film was Girls Gone Wild (Lewis Seiler, 1929). 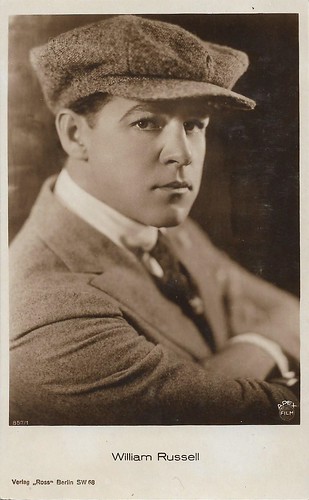 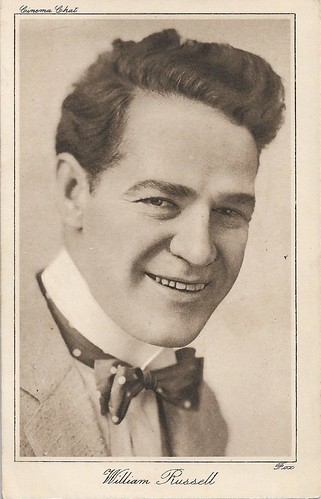