Rolf Moebius (1915-2004) was a German actor. He was pre-war star of the Ufa and starred in Propaganda films like Das Gewehr über/Shoulder Arms (1939). Later he became a character actor, who often played military, academics, jurists or police officers. Moebius remained active as a TV guest star well into the 1980s. 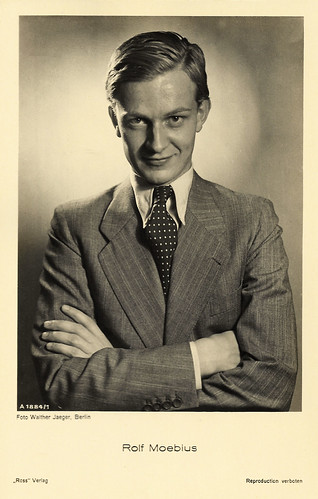 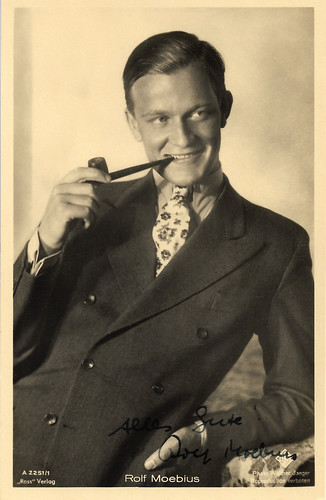 Converted to the cause of Nazi Germany

Rolf Moebius was born in 1915 in Riesa, Saxony, in the German Empire. He attended the drama school of the Staatstheater Berlin, and worked at the theatre.

In 1936, he made his film debut in a minor role in the drama Traumulus/The Dreamer (Carl Froelich, 1936) starring Emil Jannings. The following year, he co-starred opposite Lilian Harvey in the historical drama Fanny Elssler (Paul Martin, 1937) which was loosely based on the life of the dancer Fanny Elssler.

He also starred in the Propaganda film Urlaub auf Ehrenwort/Leave on Word of Honour (Karl Ritter, 1937), the last of three films set in the First World War which director Karl Ritter made during the period when Nazi Germany was rearming. For the Ufa, he appeared in the crime film Der Vorhang fällt/The Curtain Falls (Georg Jacoby, 1939) starring Anneliese Uhlig.

He also starred in the Propaganda film Das Gewehr über/Shoulder Arms (Jürgen von Alten, 1939). A German emigrant (F.W. Schröder-Schrom) to Australia becomes concerned that his son (Rolf Moebius) has been too strongly influenced by the democratic, permissive attitudes of the country and decides to send him back to Germany for military service.

While his son at first resents and resists his new lifestyle, he is eventually converted to the cause of Nazi Germany. Das Gewehr über/Shoulder Arms was one of a growing number of films of the late 1930s that were hostile towards life in the British Empire on the eve of the Second World War.

After an interval during the war years, he returned to the screen in a supporting role in Die Jahre vergehen/The Years Pass (Günther Rittau, 1945) starring Heidemarie Hatheyer. 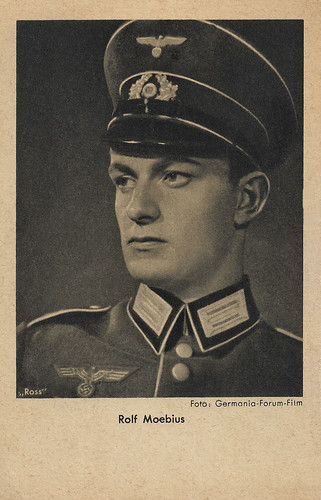 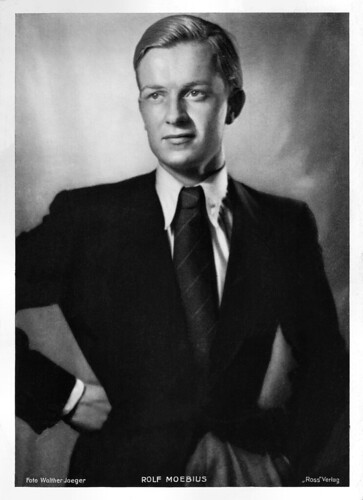 The Plot to Assassinate Hitler

After the Second World War, Rolf Moebius turned back to the theatre. He also appeared in supporting roles in such films as the Krimi Die Lüge/The Lie (Gustav Fröhlich, 1950), starring Otto Gebühr and Sybille Schmitz.

In Austria he appeared in the comedy Der Feldherrnhügel/Grandstand for General Staff (Ernst Marischka, 1953), starring Annemarie Düringer. He also had a role in Der 20. Juli/The Plot to Assassinate Hitler (Falk Harnack, 1955) on the failed 20 July 1944 attempt to assassinate Adolf Hitler.

Wikipedia: "The film has a realism that comes close to the style of a documentary. Release of the film amounted to a race competition against G. W. Pabst's film, Es geschah am 20. Juli, (English title, Jackboot Mutiny), released in the same year, dealing with the same subject."

In the second half of the 1950s, his parts became smaller and his later, international films included Les Misérables (Jean-Paul Le Chanois, 1958) with Jean Gabin as Jean Valjean, the political thriller Geheimaktion schwarze Kapelle/The Black Chapel (Ralph Habib, 1959) with Peter van Eyck, and the thriller Die 1000 Augen des Dr. Mabuse/The Thousand Eyes of Dr. Mabuse (1960), directed by Fritz Lang in his final film before his death.

In 1965 Moebius played the doctor in the Austrian family film Heidi (Werner Jacobs, 1965). His final film was Die neuen Leiden des jungen W./Werther in Blue-Jeans (Eberhard Itzenplitz, 1976), featuring Klaus Hoffmann. From then on Rolf Moebius focused on the theatre, until the 1980s. His final screen appearance was in the Krimi series Detektivbüro Roth (1986) with Manfred Krug.

Rolf Moebius died of pneumonia in 2004 in Berlin. He was 88. His partner was Carin Nosack. 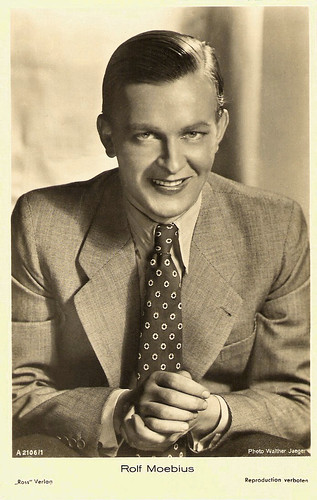 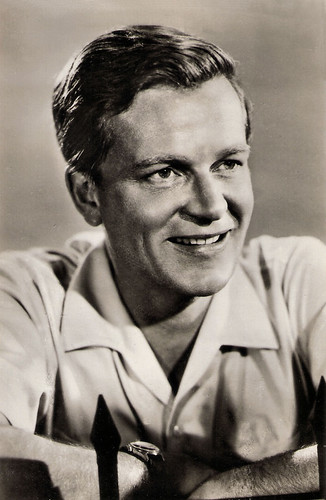