Cora Laparcerie (1875-1951) was an actress, poetess and French theatre director. She acted in several stage tragedies set in the Antiquity or ancient mythology. She never acted in a film, but had several ties to the cinema and to Mata Hari. 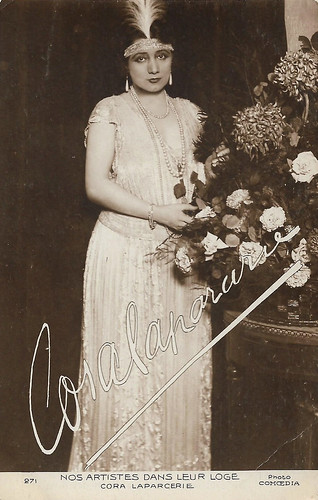 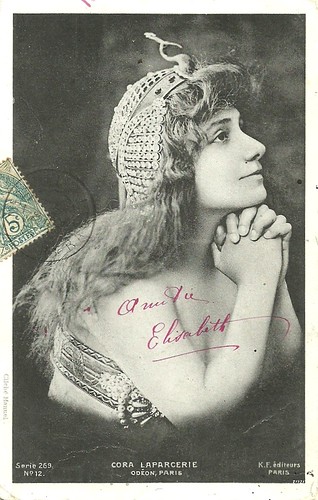 Laparcerie was noticed by the actor Jean Coquelin Sr. and began her career at the Théâtre de l'Odéon in Paris in 1896, before performing around the world. She acted in particular in tragedies set in Antiquity or ancient mythology such as 'Dejanira', 'Fausta', 'Prométhée', and 'Lysistrata', of which some were staged by the Odéon players in the Summer season at the Théâtre des Arènes at Béziers.

In 1901, she married the poet Jacques Richepin, whose works she interpreted. He was the son of the noted writer Jean Richepin. She continued to act in open air theatres in the Summer season, such as the Théâtre de la Nature in Cauterets. In 1904, she performed there in 'La Samaritaine'(1897) by Edmond Rostand, with Albert Delmont as her partner on stage.

She created in 1920 the play 'Mon homme' by Francis Carco. The title song, composed by Albert Willemetz and Maurice Yvain, would become a huge success in the interpretation of Mistinguett and in the English version 'My Man' by Fanny Brice, Billy Holiday, and Barbara Streisand.

In 1926, Laparcerie received the Legion of Honour from the hands of Edouard Herriot, then Minister of Public Education, but fell seriously ill in 1927 and then had to stop her theatrical career, and took a three-year leave to the Côte d'Azur with her family. 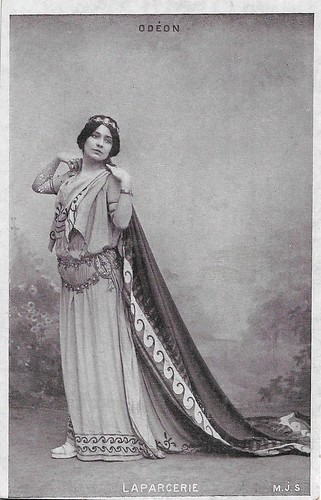 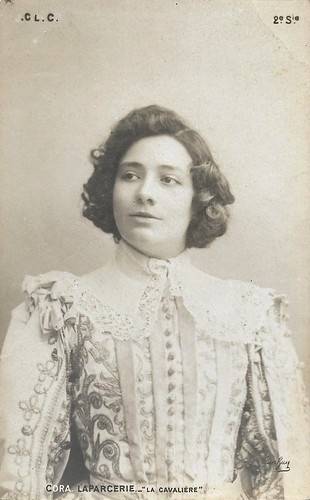 
However, Cora Laparcerie continued to direct, became a columnist in the magazine 'Comœdia' and created radio theatre by performing 'La Vraie Carmen' on Radio-Paris in 1935. André Freull wrote about her in 1901: “It was really the “popular Saturdays” that gave her glory. She madly loved verses, and therefore knew how to say them. Her fiery and nuanced voice seduced the spectators, who cheered her on. She will soon become the Muse of young literary."

As far is known, Laparcerie didn't perform in film, but some of her stage partners would have remarkable film careers, such as the Dutch actor Lou Tellegen. Yet in 1921 she performed in 'La Danseuse rouge' by Charles-Henry Hirsch, based on Hirsch's novel 'La chèvre aux pieds d'or', vaguely inspired by the Mata Hari affair, and later on twicely adapted for the cinema.

The stage play caused a stir, as Parisian audiences were appalled by the innocently convicted dancer, after which the military and conservatory forces condemned the play. Laparcerie had known Mata Hari well. For the 50th performance of her play 'Le Minaret' (1913), written by her husband, she engaged Mata Hari for a short dance. It was so successful that Laparcerie kept the Dutch dancer on the show for a whole month.

Cora Laparcerie died in Paris on in 1951 at age 75, completely forgotten, and was buried in the Richepin family chapel on Tristan Island in Douarnenez, of which she had made a place frequented by 'Tout-Paris' at the time. She was buried alongside her husband (who had died in 1946), son and daughter Miarka.

In 2010 a biography on Laparcerie appeared, written by Pierre Cassou. In 2013, Cassou left his collection of portraits of Laparcerie, her husband and his father, clothes and jewelry, all in all, 250 objects, to the city of Douarnenez. In Morcenx, Les Landes, the cinema Cora Laparcerie is named after her. 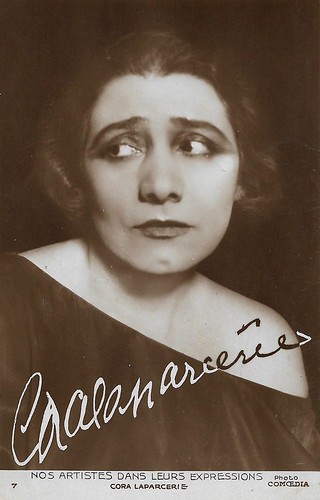 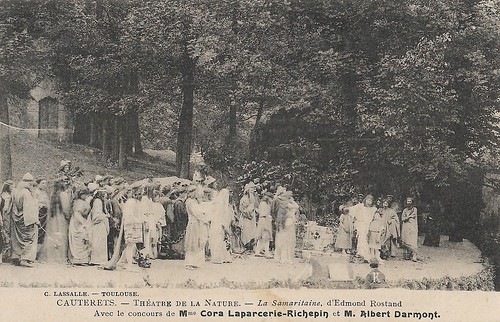 French postcard by C. Lassalle, Toulouse. Cora Laparcerie-Richepin and Albert Delmont in the stage play 'La Samaritaine' (1897) by Edmond Rostand, performed in 1904 at the Théâtre de la Nature in Cauterets.