Félix Mayol (1872-1941) was a popular French singer of the Belle Epoque. He became a success in Paris in 1895 as a singer performing in a campy, effeminate way. His hair tassel inspired many imitators. In 1905, he performed at Gaumont in 14 phonoscènes under the direction of Alice Guy. 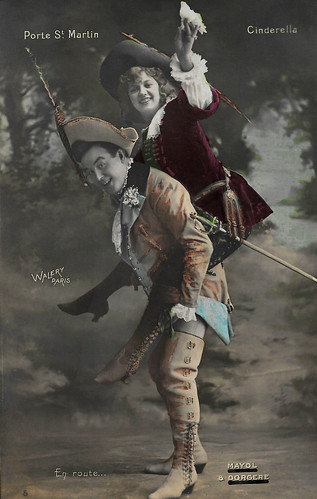 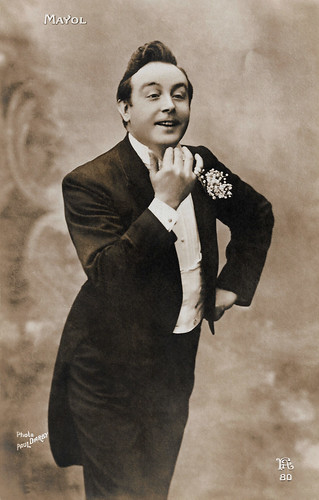 The flame of punch


Félix Antoine Henry Mayol was born in Toulon, France, in 1872. His parents were both amateur singers and actors, who arranged for Felix to make his debut stage at six years of age on the stages of Toulon and Marseille. Later, his brother Charles Mayol founded a music publishing company to print his works.

He became a success in Paris in 1895 as a singer performing in a campy, effeminate way. An anecdote published in his memoirs reports that for lack of finding a camellia, that the elegant men wore at the time on the revers of their frock coat, he took a bit of lily of the valley which became his emblem.

The improbable hair tassel he wore (and which gave him the nickname of "the red-toupeed artist" or "flame of punch") became so famous that it inspired many imitators. He knew his first great success in 1896 with 'La Paimpolaise' by Théodore Botrel.

In 1900, after a brief stint at the Eldorado where he sang 'À la cabane bambou', he was engaged by La Scala. It was there that he created the title that would make him both rich and famous: 'Viens, poupoule!' (1902), an adaptation of a German song arranged by Henri Christiné and Alexandre Trébitsch.

He returned in 1905 with 'La Matchiche', the adaptation of a fashionable Spanish dance song. The same year, he performed at Gaumont in 14 Phonoscènes under the direction of Alice Guy, such as La Paimpolaise. These were short sound films using a sound on disc system.  He would record his voice, then the camera would film him as he lip-synced to the record. Several of these Phonoscènes still exist. Already, Mayol had to his credit many recordings on cylinders and on discs.

In 1907, Mayol's operetta 'Cinderella' at La Scala did not convince, unlike one of the show's songs, 'Les Mains de femmes' which became a success, followed in 1908 by 'Cousine'. His cachet then reached the sum of a thousand gold francs, which allowed him to buy in 1910 the Paris cabaret Concert which hence took his name, the Concert Mayol. 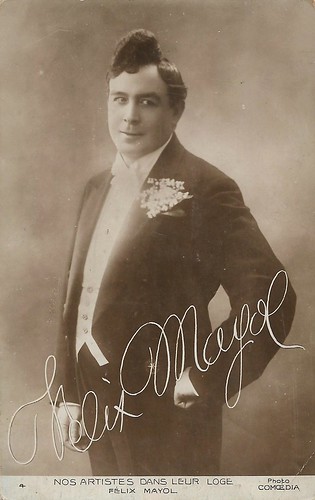 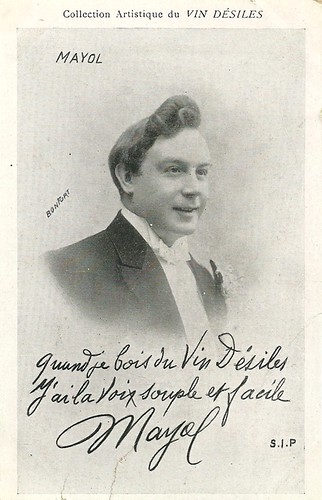 French postcard in the Collection Artistique du Vin Désiles by S.I.P. Photo: Bonfort. Caption: Whenever I drink Vin Désiles, my voice is flexible and easy. 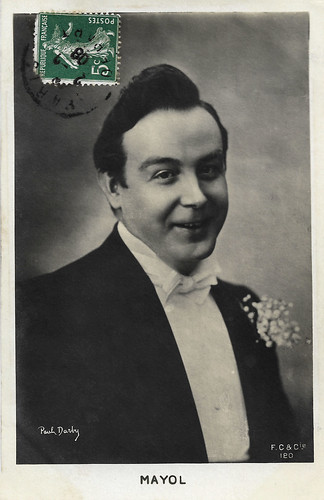 
Félix Mayol was the main star of the shows at the Concert Mayol, and in turn, he launched young artists, including Valentin Sardou (father of Fernand Sardou and grandfather of Michel Sardou), Maurice Chevalier, Émile Audiffred and Raimu.

In 1914 he passed the sceptre to Oscar Dufrenne. He then began a tour of the whole of France and the French-speaking countries with his Baret tours. His fame passed so well that even Charlie Chaplin came to listen. The period 1914-1918 was marked, as for many artists, by many anti-German songs, intended to maintain the morale of the troops.

Mayol's career stalled after the First World War. He published his 'Souvenirs' in 1929, made "seven farewell shows to the Paris public" in 1938 and retired to his hometown Toulon. He was attached to Toulon and particularly to his rugby club. Shortly after World War I, he purchased a plot of land in Toulon and donated it to the local sports club, RC Toulonnais, for the building of a stadium. He also offered 60,000 gold francs to finance the construction of the stadium which still bears his name, the stadium Mayol. The lily of the valley he loved became the emblem of the club and the sumptuous dinner he gave players to celebrate the title of 1931 has remained in the annals.

The traditional lily of the buttonhole was artificial because he could not bear the scent. Mayol's supposed or real homosexuality, linked to his celibacy and his "effeminate stage play", made Mayol a target of journalists. At the time, songwriters and other writers often referred to it, such as the marriage between Mayol and Mistinguett invented from scratch, resulting in a lot of laughter. Many stories circulated of his homosexual liaisons, including an attempt to seduce the young Maurice Chevalier.

Until now, no published direct testimony, with the exception of one, has been known in which the artist has openly evoked his sexual preferences. In his songs, often very gritty, Mayol employs most of the time the "we" of the male collective. These songs portray prostitutes or women always welcoming to the sexual encounter. According to his memoirs, Mayol created almost 500 songs. The French Wikipedia lists some 120 songs, based on the website Gallica and other sources.

Examples of the Mayol phonoscènes: