Beautiful Barbara La Marr (1896–1926) was an American film actress, who appeared in twenty-seven films during her career between 1920 and 1926. The 'Girl Who Is Too Beautiful' was noted for her beauty and her tempestuous marital history. After some early experience in Vaudeville, she became a screenplay writer, and then a performer, appearing with Douglas Fairbanks, Ramon Novarro, and others in films, as well as dancing on Broadway. Her hedonistic lifestyle in Hollywood, with heavy drug dependence, led to her early death. 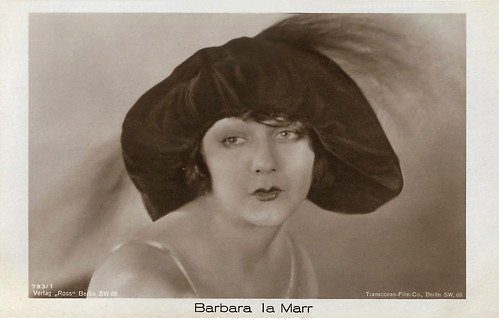 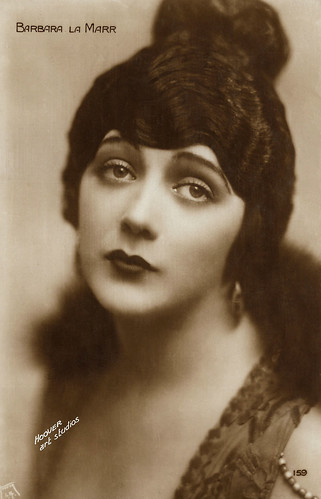 
Barbara La Marr was born Reatha Dale Watson in Yakima, Washington, in 1896. Her parents were William and Rosana 'Rose' Watson. Her father was an editor for a newspaper and her mother, a native of Corvallis, Oregon, already had one son, Henry, and a daughter, Violet, from a previous marriage.

She spent her early life in the Pacific Northwest before relocating with her family to California when she was a teenager. She made her acting debut as Little Eva in a Tacoma stage production of 'Uncle Tom's Cabin' in 1904.

After performing in Vaudeville and working as a dancer in New York City, she moved to Los Angeles with her husband, Vaudevillian Ben Deely. She became a screenwriter for Fox Film Corporation and wrote six films for the company. She was credited as writer Barbara La Marr Deely on the films The Mother of His Children, The Rose of Nome, Flame of Youth, The Little Grey Mouse, and The Land of Jazz (all released in 1920).

La Marr was finally "discovered" by Mary Pickford, who reportedly embraced her and said, "My dear, you are too beautiful to be behind a camera. Your vibrant magnetism should be shared by film audiences."

She made her film debut in Harriet and the Piper (Bertram Bracken, 1920), starring Anita Stewart. Though a supporting part, the film garnered her attention from audiences. La Marr made the successful transition from writer to actress with her supporting role in The Nut (Theodore Reed, 1921). Under her new name of Barbara La Marr, she played a femme fatale opposite Douglas Fairbanks. Later the same year, she was hired by Fairbanks to play the substantial part of Milady de Winter in The Three Musketeers (Fred Niblo, 1921), starring Douglas Fairbanks as d'Artagnan. 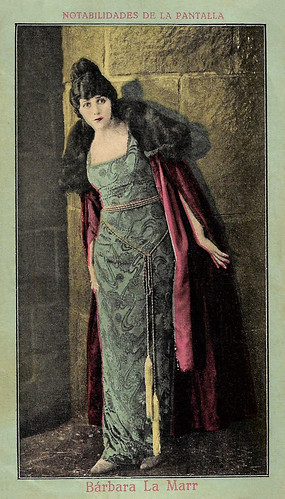 
In the following years, Barbara La Marr acted frequently in films. She became known to the public as "The Girl Who Is Too Beautiful", after Adela Rogers St. Johns, a Hearst newspaper feature writer, saw a judge sending her home during a police beat in Los Angeles because she was "too beautiful and young to be on her own in the big city." This publicity did much to promote her career.

She also made two further career-boosting films with director Rex Ingram, The Prisoner of Zenda (1922), and Trifling Women (1922), both with Ramon Novarro.

Then, La Marr signed with Arthur H. Sawyer to make several films for various studios, including The Hero (Louis J. Gasnier, 1923), Souls for Sale (Rupert Hughes, 1923) with Eleanor Boardman, and The Shooting of Dan McGrew (Clarence G. Badger, 1924), the first and last of which she co-wrote.

During her career, she became known as the pre-eminent vamp of the 1920s. She partied and drank heavily, once remarking to the press that she only slept two hours a night.

In 1924, during the filming of Thy Name Is Woman (Fred Niblo, 1924), production supervisor Irving Thalberg made regular visits to the set to ensure that La Marr's alcoholism was not interfering with the shoot. The same year, La Marr's first starring, above-the-title role came in the drama Sandra (Arthur H. Sawyer, 1924). La Marr had served as a co-writer on the film, which focused on a woman suffering from a split-personality disorder. Upon release, the film received dismally negative reviews. 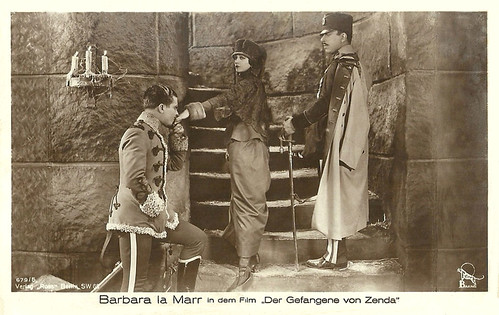 A series of crash diets for comeback roles


Barbara La Marr's health began to falter after a series of crash diets for comeback roles further affected her lifestyle. It led to her death from pulmonary tuberculosis and nephritis.

Barbara La Marr was posthumously honored on the Hollywood Walk of Fame for her contributions to the film industry. La Marr officially was married four times.

La Marr's first marriage in 1914, was to a Max Lawrence, who later turned out to be a former soldier of fortune named Lawrence Converse. He already was married with children when he married La Marr under a false name and was arrested for bigamy the following day. Converse died of a blood clot in his brain three days later.

In 1916, La Marr married Philip Ainsworth, a noted dancer. Although the son of well-off parents, Ainsworth eventually was incarcerated at San Quentin State Prison for passing bad checks, and the couple divorced in 1917.

She married for a third time to Ben Deely, also a dancer, in 1918. He was over twice her age, an alcoholic and a gambling addict, which led to the couple's separation in 1921.

Before the divorce from Deely was finalised, La Marr married actor Jack Dougherty in 1923. Despite separating a year later, they remained legally married until her death.

Some years after La Marr's death, she was revealed to have given birth to a son, Marvin Carville La Marr, in 1922. The name of the boy's father has never been released. During her final illness, La Marr entrusted the care of her son to her close friend, actress ZaSu Pitts, and Pitts' husband, film executive Tom Gallery. After La Marr's death, the child was legally adopted by Pitts and Gallery and was renamed Don Gallery. Don Gallery died in 2014. 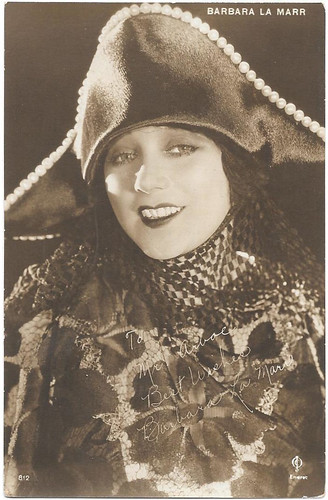 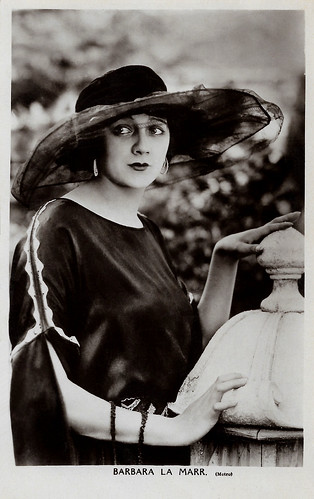