Fernand Ledoux (1897-1993) was a French character actor of Belgian origin who appeared in close to 80 films. Although films such as La Bête humaine (1938) and Remorques (Jean Grémillon, 1941) made him popular, he was above all a man of the theatre. For twenty-two years, he was a leading member of the Comédie-Française. 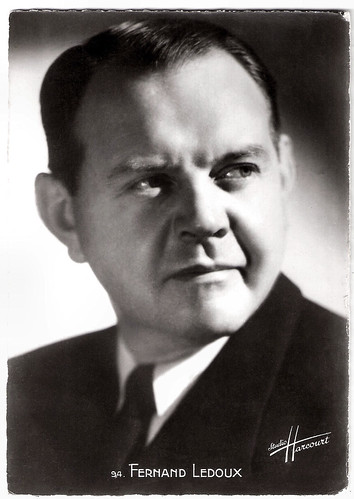 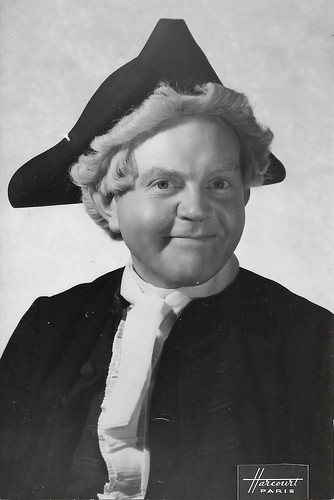 Coryphée at the Comédie-Française


Fernand Ledoux was born Jacques Joseph Félix Fernand Ledoux in Tienen/Tirlemont, Belgium, in 1897. He was the son of Joseph Ledoux, a Belgian wine wholesaler, and a Frenchwoman, Florentine Loos, the daughter of a lacemaker. His paternal great-grandfather was Napoleon I's coachman who, after the farewell at Fontainebleau in 1815, went to live in Belgium where he established himself.

Fernand Ledoux studied at the college in Tienen, then at the seminary in Saint-Trond (Sint-Truiden). He was 17 when the 'Great War' broke out. Ledoux chose his mother's French nationality and, during the First World War, joined the infantry. He finished the campaign as a machine gun sergeant.

After the armistice, in 1919, he arrived in Paris and began to attend classes with Raphaël Duflos at the Conservatoire National d'Art Dramatique (CNSAD). There, he obtained the second prize in acting. Ledoux then began to play small roles, in particular at the Comédie-Française where he was hired in 1921 by Maurice de Féraudy for small roles (at the time called 'coryphée'). He made his debut as a peasant in 'Monsieur de Pourceaugnac'. From 1931 to 1942, he was a member of the Comédie-Française.

Ledoux was particularly known as the stationmaster and the deadly jealous husband of Séverine (Simone Simon) in Jean Renoir's famous film La Bête humaine/The Human Beast (1938). In 1941, Maurice Tourneur gave him a beautiful role as a shady character in his Volpone (1941).

In the meantime, in 1938, Pierre Dux, Fernand Ledoux, and Alfred Adam opened an acting class in a studio on the top floor of the Théâtre Pigalle. Although it was the cinema that made him popular, Ledoux was above all a man of the theatre.

On 3 September 1939, he was at sea off the coast of Dakar when the radio onboard announced the outbreak of war. He returned to Paris, but at the age of 42, he could not be mobilised. Wishing to fight, he enlisted in April 1940 in the 212th regional regiment in Fontainebleau, from where the retreat took him and his corps to the village of Coudures in the Landes.

In 1942, he stopped his activities at the Comédie-Française to avoid acting in front of the occupying forces and devoted himself exclusively to the cinema. That same year, he was remarkable in Goupi Mains Rouges/It Happened at the Inn (Jacques Becker, 1942) and in Les Visiteurs du soir/The Devil's Envoys (Marcel Carné, 1942). 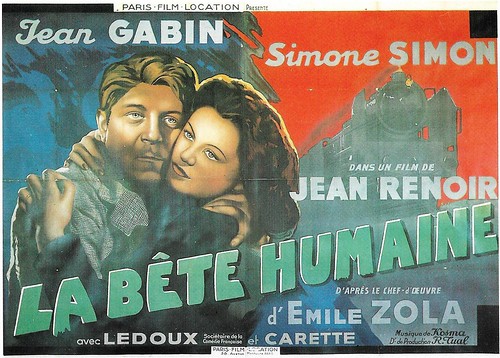 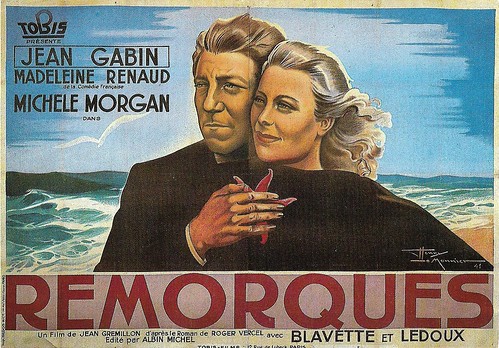 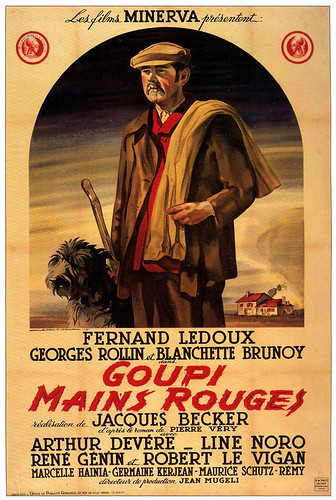 
In September 1944, after the Liberation, Fernand Ledoux was worried for a while by the resistance, because he had participated in the films of the German-owned Continental company. But it was soon proven that this participation was purely professional and non-political.

Between 1940 and 1945 Fernand Ledoux was very popular in France, acting in such films as Remorques/Stormy Waters (Jean Grémillon, 1941) in which he was reunited with Jean Gabin after La Bête humaine/The Human Beast, Premier Bal/First Ball (Christian Jaque, 1941) in which he was the father of the leads Marie Déa and Gaby Sylvia, and Le Lit à colonnes/The Four-poster (Roland Tual, 1941) in which he is a prison warden who becomes successful by stealing compositions from a prisoner.

Ledoux had the male leads in the Georges Simenon adaptation L'Homme de Londres/The London Man (Henri Decoin, 1943) as a railwayman who witnesses a murder and grabs a suitcase filled with money, in Des jeunes filles dans la nuit/Young girls in the night (René Le Hénaff, 1943) about the sudden return home of six boarding girls after their boarding house burns down, in Béatrice devant le désir/Behold Beatrice (Jean de Marguenat, 1944) about an unscrupulous doctor, and in Sortilèges/The Bellman (Christian Jaque, 1945) also with Madeleine Robinson.

From 1950 to 1954, Ledoux returned to the Comédie-Française as a special status boarder where he made several striking creations. Also, after an absence in 1950-1951, Ledoux had again a prolific film career in the 1950s with e.g. the Italo-French coproduction La ragazza di Trieste/Les Loups chassent la nuit/Wolves Hunt at Night (Bernard Borderie, 1952) with Carla Del Poggio and Jean-Pierre Aumont, and the Franco-American film An Act of Love (Anatole Litvak, 1953) with Kirk Douglas and Dany Robin. 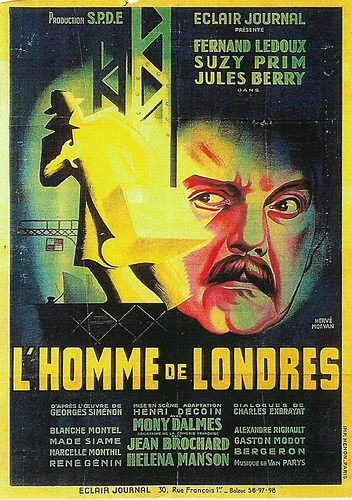 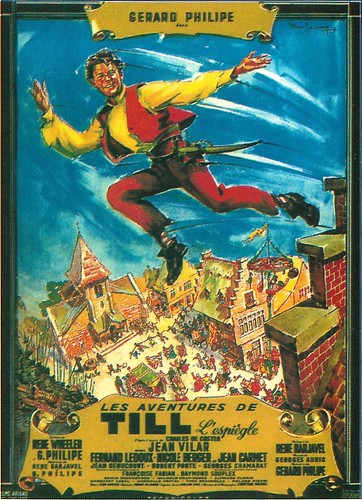 He also worked with such directors as Jacques Demy on the musical Peau d'âne/Donkey Skin (1970) starring Catherine Deneuve, and Claude Chabrol on the fantasy Alice ou la Dernière Fugue/Alice or the Last Escapade (1977), featuring Sylvia Kristel. He retired from the screen after acting again in Les Misérables (Robert Hossein, 1982), now as Mr. Gillenormand, the oncle of Marius.

He was also seen in numerous television films. Ledoux completely retired in 1984. After the death of the actor Charles Vanel in 1989, he became the oldest French actor until his death in 1993. Just as for Charles Vanel, between 1989 and 1993, on his birthdays, he was visited by TV news teams or the written press, or he recounted his memories during reports on his person.

Fernand Ledoux married Fernande Thabuy in 1931, The couple had four children: Claude, Françoise, Thierry and Jacques. Fernande died in 1997. A great lover of the Normandy coast, which he loved to paint, Ledoux lived in Pennedepie, then in Villerville in the Côte-d'Or region. In this town, he died at the age of 96. Fernand Ledoux is buried in Villerville. 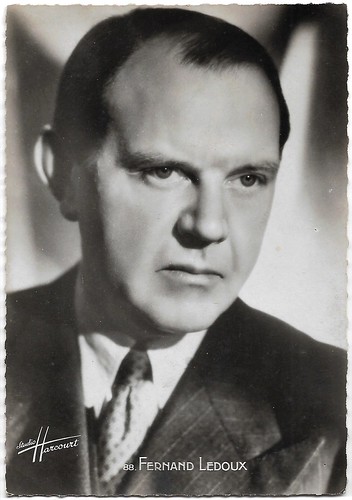 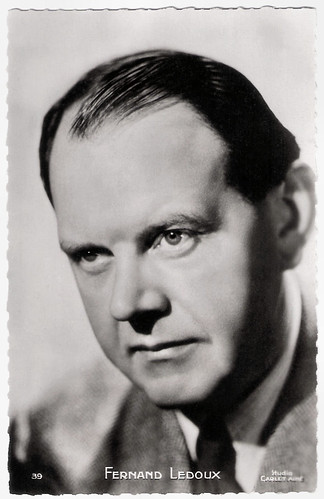