Lea Massari (1933) is an Italian actress who worked in both Italian and French cinema. She is best remembered for such film classics as Michelangelo Antonioni's L'avventura (1960) as the missing girl Anna, and Louis Malle's Le Souffle au Coeur (1971) as Clara, the mother of a sexually precocious 14-year-old boy. 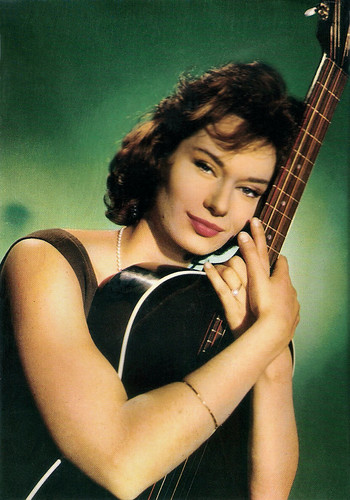 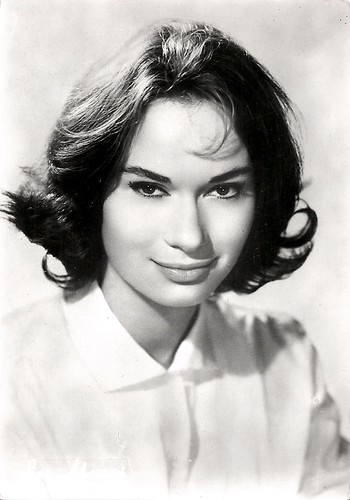 Italian postcard by Rotalfoto, Milano, no. 694.

A sweet girl in love


Lea Massari was born in 1933 in Rome, in the district of Monteverde Vecchio, as Anna Maria Massatani. She was the daughter of a Roman engineer, and also of Umbrian descent on her mother's side.

During her childhood, she lived in Spain, France, and Switzerland. Back in Rome, she enrolled at university and attended architecture courses in the early 1950s. In the meantime, she worked as a model and collaborated with the set and costume designer Piero Gherardi, a family friend, who soon introduced her to the world of cinema.

On the set of the film Proibito/Forbidden (1954), where Gherardi worked, director Mario Monicelli noticed her aristocratic and refined features, underlined by her feline gaze and hoarse voice. He convinced her to play a passionate Sardinian girl, alongside Amedeo Nazzari and Mel Ferrer.

On the occasion of her debut on the big screen, at the age of 21, she assumed a stage name in memory of her fiancé Leo, with whom she was supposed to be married, but who died in a tragic accident a few days before the wedding.

The role of the sweet girl in love was repeated in I sogni nel cassetto/Dreams in a Drawer (Renato Castellani, 1957), where she was dubbed by Adriana Asti. 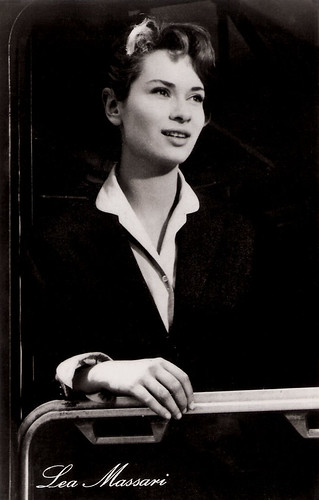 
In the 1960s Lea Massari took part in many Italian and French productions, playing increasingly challenging roles, mostly as a middle-class woman. She began to gain international notoriety alongside Gabriele Ferzetti and Monica Vitti in Michelangelo Antonioni's film L'avventura/The Adventure (1960). She played perhaps the most iconic role of the first phase of her career, that of Anna, a dreamy young woman who suddenly disappears during a boating trip in the Mediterranean. L'Avventura was nominated for numerous awards and was awarded the Jury Prize at the 1960 Cannes Film Festival.

In the same period, she was in the cast of more important films such as La giornata balorda/From a Roman Balcony (Mauro Bolognini, 1960), Il colosso di Rodi/The Colossus of Rhodes (Sergio Leone, 1960) alongside Rory Calhoun, and especially Una vita difficile/A Difficult Life (Dino Risi,1961) opposite Alberto Sordi and Franco Fabrizi.

Although uncredited, she is notable in Le quattro giornate di Napoli/The Four Days of Naples (Nanni Loy, 1962), based on a subject by Vasco Pratolini, followed by participation in another war-themed film, La città prigioniera/The Captive City (Joseph Anthony, 1962) with David Niven, Ben Gazzara, and Martin Balsam.

In that period she received a special David di Donatello award for her performance in I sogni muoiono all'alba/Dreams Die at Dawn (Mario Craveri, Enrico Gras, 1961). The film is set during the Hungarian Revolution of 1956 and based on a play by Indro Montanelli.

In 1963 she was proposed for the role of Marcello Mastroianni's wife in 8½ by Federico Fellini, later assigned to Anouk Aimée; it seems that during the audition for this part the director was not convinced because of inadequate make-up by Gherardi. In the same year she starred with Francisco Rabal in the drama Llanto por un bandido/I cavalieri della vendetta/Weeping for a Bandit (Carlos Saura, 1963). 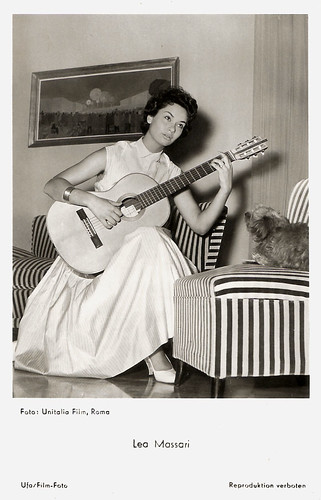 A sensational accusation for corruption of minors


Since the early years of her career, Lea Massari was often paired with well-known French actors, such as Jean Sorel in the aforementioned La giornata balorda (Mauro Bolognini, 1960), Alain Delon in the Film Noir L'insoumis/The Unvanquished (Alain Cavalier, 1964), and La prima notte di quiete (Valerio Zurlini, 1972) for which she won the first of her two Nastri d'argento, and Maurice Ronet in Il giardino delle delizie/The garden of delights (1967), a debut film by Silvano Agosti which was heavily censored in Italy.

In 1970 she teamed up with Michel Piccoli and Romy Schneider in the controversial Les Choses de la vie/The Things of Life, the first success of director Claude Sautet, for which the Roman actress won the Louis-Delluc award. she would return to work with Piccoli in Le divorcement (Pierre Barouh, 1979).

Much appreciated especially in France, after having dealt with the scabrous theme of incest in Louis Malle's French comedy-drama Le Souffle au Coeur/Murmur of the Heart (1971), where she played probably the most important role of her maturity and which also cost her a sensational accusation in Italy for corruption of minors, closed with a full acquittal. The film was screened at the 1971 Cannes Film Festival and was a box office success in France. In the United States, it received positive reviews and a nomination for the Academy Award for Best Original Screenplay. In 1973 she received an Étoile de Cristal as the best foreign actress.

In 1969 she had also starred with Gérard Blain and debutant Teo Teocoli in Gianni Vernuccio's film Paolo e Francesca, released two years later. She appeared in John Frankenheimer's Story of a Love Story (1973), opposite Alan Bates and Dominique Sanda, and Paolo and Vittorio Taviani's historical drama Allonsanfàn (1974), opposite Marcello Mastroianni. In 1975 she was called to participate as a juror at the Cannes Film Festival.

In 1977, she took part in the film Antonio Gramsci - I giorni del carcere/Antonio Gramsci: The Days of Prison (Lino Del Fra, 1977) with Riccardo Cucciolla which won the Pardo d'oro at the Locarno Festival. In 1979 she received her second Nastro d'argento for the role of Luisa Levi in Cristo si è fermato a Eboli/Christ Stopped at Eboli (Francesco Rosi, 1978) where she played alongside Gian Maria Volonté, whom she herself considered the best colleague she had ever worked with. 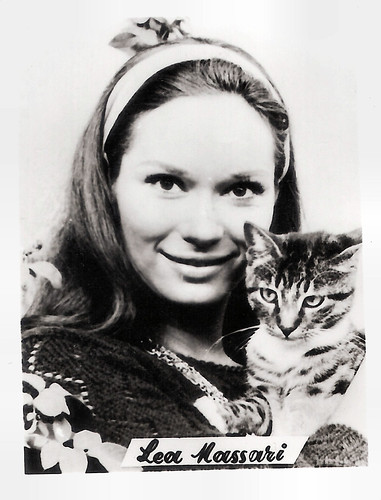 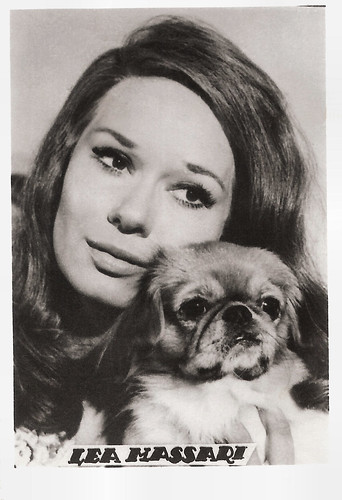 An actress notoriously disinclined to be a star


Lea Massari has also worked successfully in the theatre, including in William Gibson's 'Due sull'altalena' (Two for the Seesaw) (1960), directed by Arnoldo Foà, and on television, as in Capitan Fracassa/Captain Fracasse (1958), I promessi sposi/The Betrothed (1967), in the role of the Monaca di Monza (the nun of Monza), I fratelli Karamazov/The Brothers Karamazov (1969) and Quaderno proibito/Forbidden notebook (1980).

She was particularly appreciated by audiences and critics was her performance in Anna Karenina (Sandro Bolchi, 1974), which was repeated several times by the RAI. Her last appearance on the small screen was opposite Erland Josephson in Una donna spezzata/A broken woman (Marco Leto, 1988), based on the novel 'La femme rompue' by Simone de Beauvoir and scripted by Massari herself.

Passionate about hunting from a young age, following the example and encouragement of her father, she reduced her artistic activity from the early 1980s onward, to devote herself decisively to ecological and animal rights campaigns. She appeared again in Giuseppe Bertolucci's film Segreti Segreti/Secrets Secrets (1985) in which she played the painful role of Lina Sastri's suicidal mother.

An actress notoriously disinclined to be a star, shy and reserved, and often forced to live and work abroad partly because of her husband's work, she retired for good in 1990, at the age of 57. After that she rarely appeared in public and gave few interviews, refusing various invitations to return to the set, such as the one received by Ferzan Özpetek, who wanted her in Cuore sacro/Sacred Heart (2005), in a role then assigned to Lisa Gaston.

Her last film, which had little success, was Viaggio d'amore/Journey of Love (Ottavio Fabbri, 1990), based on a subject by Tonino Guerra, in which she starred alongside Omar Sharif. After retiring from the stage, she moved to Sardinia with her husband, the former Alitalia pilot Carlo Bianchini, whom she had married in 1963.

Following a financial crisis, she put her important collection of antique jewelry up for auction in 1994. In addition to her campaigns in defense of animals and against vivisection, which also led her to support various dog pounds, her passion for the guitar and Brazilian music is well known. 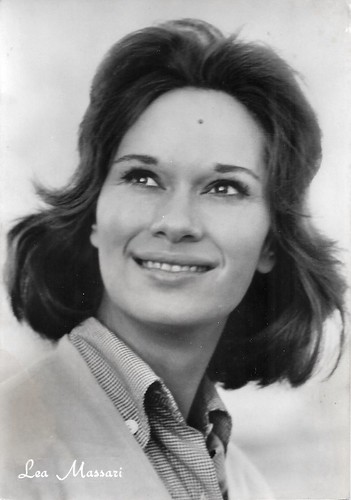 Italian postcard by Rotalfoto, Milano, no. 1066. 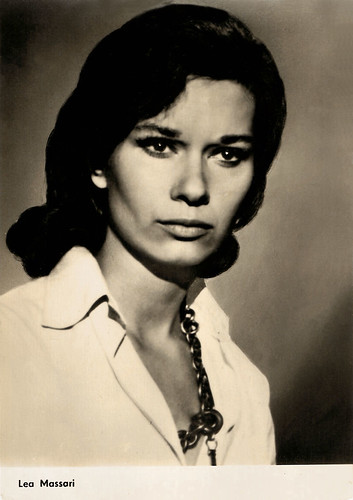