The two-part American martial arts film Kill Bill: Volume 1 (Quentin Tarantino, 2003-2004) stars Uma Thurman as the Bride (code name Black Mamba), a former member of a team of assassins, the Deadly Viper Assassination Squad, described as "the deadliest woman in the world". She swears revenge on the Deadly Viper Assassination Squad (Lucy Liu, Michael Madsen, Daryl Hannah, and Vivica A. Fox) and their leader, Bill (David Carradine), after they try to kill her and her unborn child. Her journey takes her to Tokyo, where she battles the yakuza. 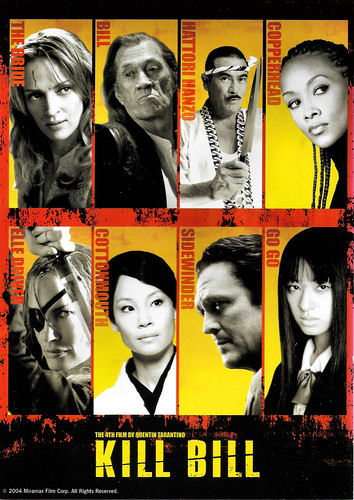 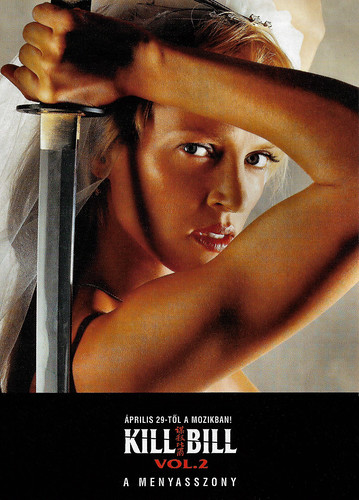 
Writer-director Quentin Tarantino and actress Uma Thurman conceived the Bride character during the production of Tarantino's Pulp Fiction (1994); Kill Bill credits the story to "Q & U". The two began talking about the kinds of films that they would like to do, and Quentin said he would like to do a 1970s style kung-fu flick. Uma came up with the film's opening shot of her beaten up and wearing a wedding gown.

Tarantino spent a year and a half writing the script while he was living in New York City in 2000 and 2001, spending time with Thurman and her newborn daughter Maya. Reuniting with the more mature Thurman, now a mother, influenced the way Tarantino wrote the Bride character; he did not come to the realization that the Bride's child could still be alive until the end of the writing process.

He originally wrote Bill for Warren Beatty, but as the character developed and the role required greater screen time and martial arts training, he rewrote it for David Carradine.

Tarantino decided to cast Daryl Hannah as Elle Driver after seeing her performance as a secret agent in the television film First Target (Armand Mastroianni, 2000). The physical similarities between Thurman and Hannah inspired how he wrote the rivalry between the two characters.

Tarantino revealed in an interview that the music used in Kill Bill was all from other films. He used music from his soundtrack collection. It is the first of two Kill Bill films made in a single production. They were planned as a single release, but the film, with a runtime of over four hours, was divided into two. Volume 2 was released the following year. Volume 1 grossed over $180 million on a $30 million budget. 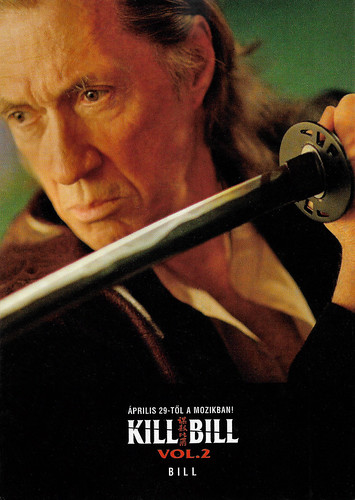 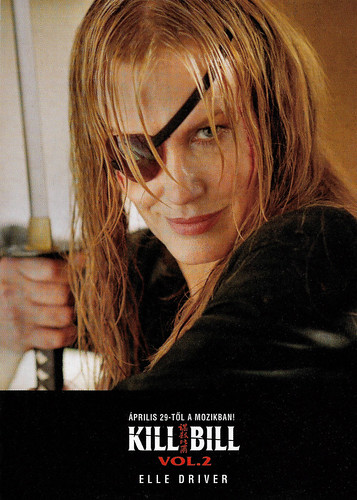 
A woman in a wedding dress, the Bride (Uma Thurman), lies wounded in a chapel in El Paso, Texas, having been attacked by the Deadly Viper Assassination Squad. She tells their leader, Bill (David Carradine), that she is pregnant with his baby just before he shoots her in the head.

Four years later, the Bride awakens from her coma and is horrified to find that she is no longer pregnant. She kills a man who tries to rape her and a hospital worker who has been selling her body while she was comatose. She takes the hospital worker's truck and teaches herself to walk again.

The Bride goes to the home of Vernita Green (Vivica A. Fox), planning to kill her. Both women were members of the Deadly Vipers, which has since disbanded; Vernita now leads a normal suburban family life. They engage in a knife fight but are interrupted by the arrival of Vernita's young daughter, Nikki. The Bride agrees to meet Vernita at night to settle the matter, but when Vernita tries to shoot the Bride with a pistol hidden in a box of cereal, the Bride throws a knife into Vernita's chest, killing her. Nikki witnesses the killing, and the Bride offers her a chance to avenge her mother's death when she grows up, should she choose to do so.

Four years earlier, police investigate the massacre at the wedding chapel. The sheriff discovers that the Bride is alive but comatose. In the hospital, Deadly Viper Elle Driver (Daryl Hannah) prepares to assassinate the Bride via lethal injection, but Bill aborts the mission at the last moment, considering it dishonorable to kill the Bride when she cannot defend herself.

Resolving to kill Bill and the other Deadly Vipers, the Bride picks her first target: O-Ren Ishii (Lucy Liu), now the leader of the Tokyo yakuza. O-Ren's parents were murdered by the yakuza when she was a child; she took vengeance on the yakuza boss and replaced him after training as an elite assassin. The Bride travels to Okinawa, Japan, to obtain a sword from legendary swordsmith Hattori Hanzō (Sonny Chiba), who has sworn never to forge a sword again.

After learning that her target is Bill, his former student, he relents and crafts his finest sword for her, taking a month to finish the job. The Bride tracks O-Ren to the House of Blue Leaves, a Tokyo restaurant, and amputates the arm of her assistant, Sofie Fatale (Julie Dreyfus). She defeats the Crazy 88, O-Ren's squad of elite fighters, and kills her bodyguard, schoolgirl Gogo Yubari (Chiaki Kuriyama). O-Ren and the Bride duel in the restaurant's Japanese garden; the Bride gains the upper hand and kills O-Ren by slicing off the top of her head. After torturing Sofie for information about Bill, the Bride leaves her alive as a threat. Bill finds Sofie and asks her if the Bride knows that her daughter is alive. 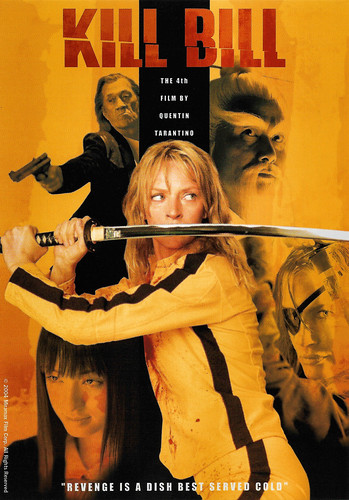 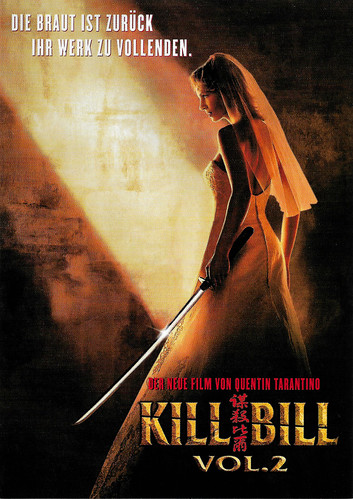 
In Kill Bill, Vol 2 (Quentin Tarantino, 2004), the Bride (Uma Thurman) continues her quest for vengeance against her former boss and lover Bill (David Carradine). Having dispatched several of her arch-enemies in the first film, she now pursuits the reclusive bouncer and Bill's younger beer-swilling brother Budd (Michael Madsen), and the treacherous, one-eyed Elle Driver (Daryl Hannah).

Bill, Bud, and Elle are the only survivors from the squad of assassins who attempted to murder her and her unborn child on her wedding day in a furious assault. It's all leading up to the ultimate confrontation with Bill, the Bride's former master, and the man who ordered her execution! Like Volume 1, Volume 2 received positive reviews and was a box-office hit.

Kill Bill Vol. 2 stands on its own, although Vol. 1 and Vol. 2 were planned and produced as a single film. After editing began, producer Harvey Weinstein, who was known for pressuring filmmakers to shorten their films, suggested that Tarantino split the film in two. The decision was announced in July 2003. Vol. 2 is not a sequel but a continuation and completion. It is a distillation of the countless grindhouse Kung-fu movies Tarantino has absorbed and transcends.

Perry Seibert at AllMovie: "Where Volume 1 offered the most visually freewheeling Tarantino work ever, Volume 2 showcases how deliberate his intentions are. Take the training sequence with Pai Mei: This looks like every kung fu movie that ever played on a Saturday afternoon on your local UHF station. The cheesy zooms, the arch dialogue, and the faux-mystical bearded mentor are all intricately planned and in place. These elements are not kitsch; Tarantino genuinely loves these genre tropes and wants nothing more than to share that love with the audience while never taking his eye off the story. This is exactly what he accomplishes in Kill Bill, and he does it with confidence."

Vol. 2 opens with a long closeup of The Bride behind the wheel of a car, explaining her mission, which is to kill Bill. Flashbacks remind us that the pregnant Bride and her entire wedding party were targeted by the Deadly Viper Assassination Squad in a massacre at the Two Pines Wedding Chapel. Bill was responsible. Roger Ebert at RogerEbert.com: "He's played by David Carradine in a performance that somehow, improbably, suggests that Bill and the Bride had a real relationship despite the preposterous details surrounding it. (Bill is deeply offended that she plans to marry a used record store owner and lead a normal life.)"

In "Volume 2," The Bride meets the warrior master Pai Mei (Gordon Liu), who lives on the top of a high, lonely hill reached by climbing many stairs. He was Bill's master, and in a flashback, Bill delivers his protege for training. Pai Mei is a harsh and uncompromising teacher, and the Bride sheds blood during their unrelenting sessions. The training with Pai Mei prepared The Bride to begin her career with Bill. In the action that takes place "now," The Bride has to fight her way past formidable opponents, including Elle Driver (Daryl Hannah), the one-eyed master of martial arts, and Budd (Michael Madsen), who works as a bouncer in a strip joint and lives in a mobile home surrounded by desolation.

Neither one is a pushover for The Bride. The showdown with Budd involves a sequence where it seems The Bride must surely die after being buried alive. The fight with Elle Driver is a virtuoso celebration of fight choreography. Their battle takes place inside Budd's trailer home, which is pretty much demolished in the process. Roger Ebert: " Tarantino, who began the film in black and white before switching to color, plays with formats here, too; to suggest the claustrophobia of being buried, he shows The Bride inside her wooden casket, and as clods of earth rain down on the lid, he switches from widescreen to the classic 4x3 screen ratio."

As with Tarantino's previous films, Kill Bill features an eclectic soundtrack comprising many musical genres. On the two soundtracks, the music ranges from country music to selections from the Spaghetti Western film scores of Ennio Morricone. Bernard Herrmann's theme from the film Twisted Nerve is whistled by the menacing Elle Driver in the hospital scene. A brief, 15-second excerpt from the opening of the Ironside theme music by Quincy Jones is used as the Bride's revenge motif, which flares up with a red-tinged flashback whenever she is in the company of her next target.

Roger Ebert: "One of the achievements of "Volume 2" is that the story is filled in, the characters are developed, and they do begin to resonate, especially during the extraordinary final meeting between The Bride and Bill - which consists not of nonstop action but of more hypnotic dialogue and ends in an event that is like a quiet, deadly punch line. Put the two parts together, and Tarantino has made a masterful saga that celebrates the martial arts genre while kidding it, loving it, and transcending it. I confess I feared that "Volume 2" would be like those sequels that lack the intensity of the original. But this is all one film, and now that we see it whole, it's greater than its two parts; Tarantino remains the most brilliantly oddball filmmaker of his generation, and this is one of the best films of the year."

Kill Bill Vol. 2 grossed $25.1 million on its opening weekend, which was higher than Vol. 1's, and the equivalent success confirmed the studio's financial decision to split the film into two theatrical releases. Vol. 2 grossed a total of $66.2 million in the United States and Canada and $86 million in other territories for a worldwide total of $152.2 million. In June 2021, Quentin Tarantino stated that a potential Kill Bill Vol. 3 would take place 20 years following the original volumes and that he was excited about the possibility of Uma Thurman and her daughter Maya Hawke playing the Bride and her daughter B.B. respectively. 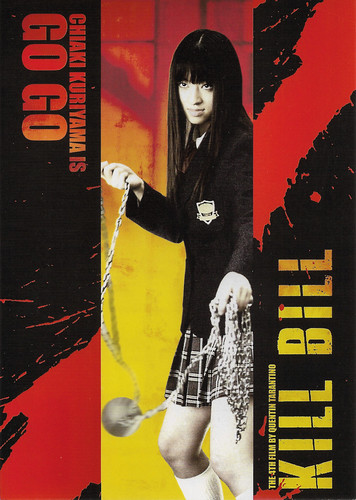 British postcard by Pyramid Posters, Leicester, no. PC9462. Photo: Miramax / A Band Apart. Chiaki Kuriyama as Gogo Yubari in Kill Bill (Quentin Tarantino, 2003). Caption: The 4th film by Quentin Tarantino. When Kuriyama was shooting this scene where she flings her ball and chain out, she accidentally hit Quentin Tarantino on the head as he stood by the camera. 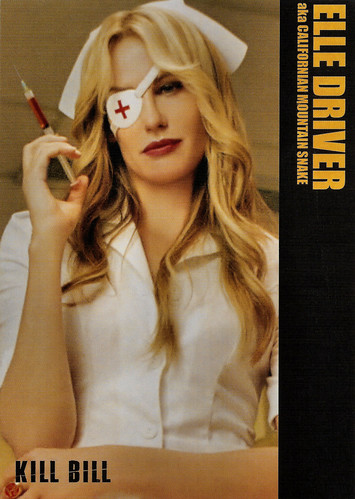