Belgian-Portuguese singer Lio (1962) had a huge success in 1979 in France and Belgium with her song 'Banana Split'. With more than 1 million singles sold, it became one of the most popular hits in French-language music of the 1980s. She had further pop hits with 'Amoureux solitaires' (1980), 'Amicalement votre' (1981) and 'Mona Lisa' (1982). She also appeared in several French films. 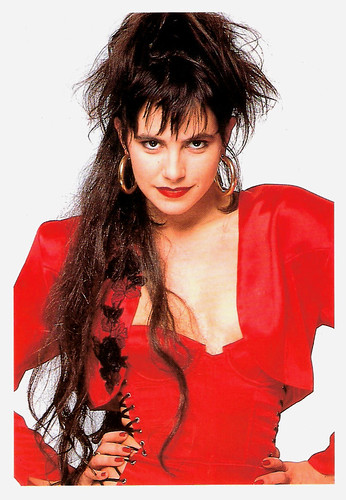 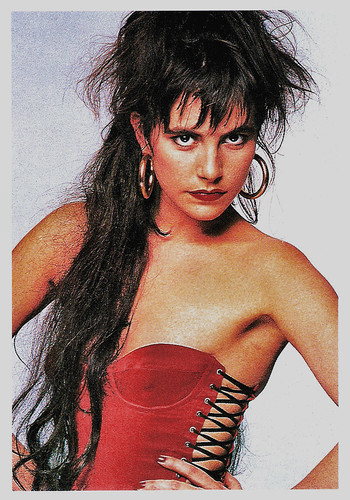 
Lio was born as Vanda Maria Ribeiro Furtado Tavares de Vasconcelos in 1962 in Mangualde, a small town in Portugal. Her parents were politically left-wing, and Lio has remained true to this social vision. Her parents divorced and, in 1968, Vanda moved with her mother and new stepfather to Brussels, Belgium, where her sister, actress Helena Noguerra, was born.

In her teens, she was determined to become a singer, and she was encouraged by singer-songwriter Jacques Duvall (né Eric Verwilghem), a family friend. She took her stage name, Lio, from a character in the Barbarella comic books by Jean-Claude Forest. Lio is a lolitesque teenager that Barbarella must save from the bad guys.

In 1979, together with songwriter Jay Alanski, she and Duvall began working with Marc Moulin and Dan Lacksman from the electro-trio Telex. According to Dutch Wikipedia, she owed her record deal to the Belgian tax laws, which obliged her music company to take on Belgian artists as well. To the amazement of everyone, including Lio herself, her song 'Banana Split (1979)' became a big hit in Belgium and France.

Lio has, in her own words, "a voice with a high acidity content". Her repertoire meets this requirement by its lack of sentimentality, which is quite exceptional in French light music. In 1982 the American music duo Ron and Russell Mael, of Sparks, worked with her on the album 'Suite sixtine', on which some of her previous songs were translated into English. In 1985, she met record company executive and producer Michel Esteban, of ZE Records.

She continued to have hit singles in Europe, including 'Les brunes comptent pas pour des prunes', and travelled to Los Angeles with Esteban to record her next album 'Pop model' (1986). Several of the tracks were co-produced by John Cale, formerly of the Velvet Underground, and the album produced the hits 'Fallait pas commencer', 'Je casse tout ce que je touche'. and 'Chauffeur'. Lio performed four days of concerts at the Olympia of Paris and in 1987, she gave birth to Nubia, the first of her six children. 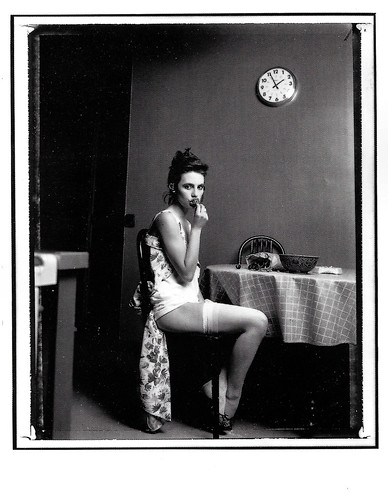 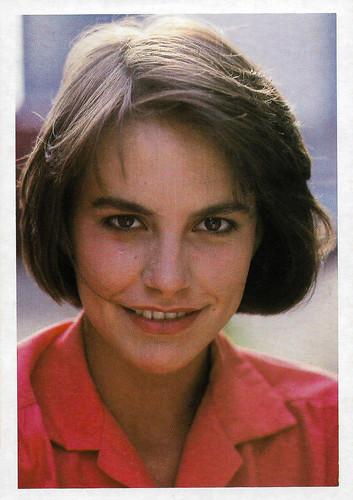 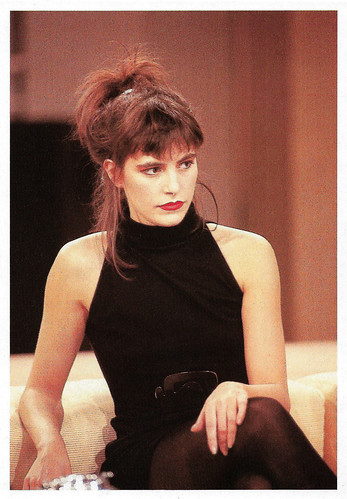 Getting rid of her babydoll image


Lio entered the film world in 1983. She played a carefree hairdresser in Golden Eighties (Chantal Akerman, 1986), a lighthearted, humorous French pop musical about the people who work together in a Parisian shopping centre. It was followed by the romantic comedy Elsa, Elsa (Didier Haudepin, 1985) with François Cluzet. Then followed Itinéraire d'un enfant gâté/Itinerary of a Spoiled Child (Claude Lelouch, 1988), the last big hit of the career of Jean-Paul Belmondo.

After Lio's album 'Can Can' (1988) flopped, she decided to become a fashion designer. It became a commercial success and from 1988 to 1990 she was allowed to design for Prisunic. In 1990, she stopped designing and resumed making films. She played with Michel Blanc and Jacques Dutronc in the comedy Chambre à part (Jacky Cukier, 1989). Her next films were Jalousie/Jealousy (Kathleen Fonmarty, 1991), the romantic drama Sale come un ange/Dirty Like an Angel (Catherine Breillat, 1991) with Claude Brasseur, and the drama Sans un cri/Without a shout (Jeanne Labrune, 1991).

In Après l'amour (Diane Kurys, 1992) she co-starred with Isabelle Huppert and Bernard Giraudeau. Lio also appeared in various men's magazines, such as the French Playboy. In 1991, she recorded her album 'Des fleurs pour un caméléon' which had little more success than 'Can Can'. Around her 30th birthday, Lio decided that it was time to get rid of her babydoll image, but the studios did not agree. She starred in the Spanish film La Madre muerta/The Dead Mother (Juanma Bajo Ulloa, 1993). the French film Personne ne m'aime (Marion Vernoux, 1994) opposite Bernadette Lafont and Bulle Ogier, and the Spanish-French coproduction Niña de tus sueños (Jesús R. Delgado, 1995).

Her 1996 album 'Wandatta' was more mature, but the general public was not very interested in her new style. Lio's singing career took an unexpected turn in 1999 with her album 'Lio chante Prévert', with classical chansons based on texts by the French literary great Jacques Prévert. The album received good reviews, and earned Lio some significant concerts, in Paris and Spa. In 1999 she also appeared in 50 performances of the French adaptation of 'Seven Brides For Seven Brothers', a musical staged at the Folies Bergère. But her success never became what it was in the 1980s.

In 1999 she divorced her husband, singer Zad and sued him for assault. In 2004, the then 42-year-old Lio published her autobiography 'LIO popmodel' in collaboration with the journalist Gilles Verlant. she released the live album 'Cœur de rubis' in 2004. That year, she also appeared in over 250 performances of the theatre play 'Le Bébé', an adaptation of a book by Marie Darrieussecq staged by Marc Goldberg. She also continued to appear in films such as Pas douce/A Parting Shot (Jeanne Waltz, 2007), Une vieille maîtresse/The Last Mistress (Catherine Breillat, 2007) with Asia Argento, and La robe du soir/The evening dress (Myriam Aziza, 2009).

Since 2008, Lio has been a judge on the French "pop idol" show Nouvelle Star. In 2009, she returned to music with the rock band Phantom. In 2011, she became a judge on another TV show, The Voice Belgique. In the following years, several of Lio's songs, like 'Mona Lisa' (1982) have been rediscovered and used as samples in songs by artists in the Nu-disco, House and EDM genres. Later films include Un poison violent/Love like poison (Katell Quillévéré, 2010) with Michel Galabru, Stars 80 (Frédéric Forestier, Thomas Langmann, 2012) with Richard Anconina, and the TV film Elle m'a sauvée/She saved me (Ionut Teianu, 2022). Her most recent album is 'Lio canta Caymmi' (2018). It consists of half-Portuguese, half-French covers of songs by the Brazilian composer Dorival Caymmi. It was the first time she recorded an entire album in Portuguese, her mother tongue. Lio has six children. 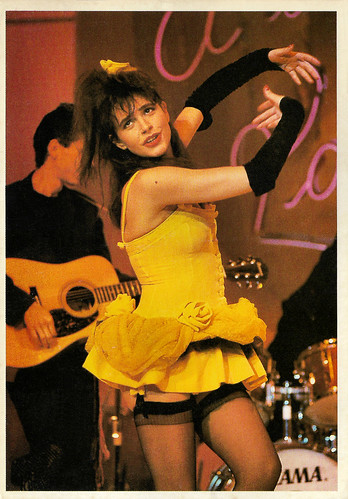 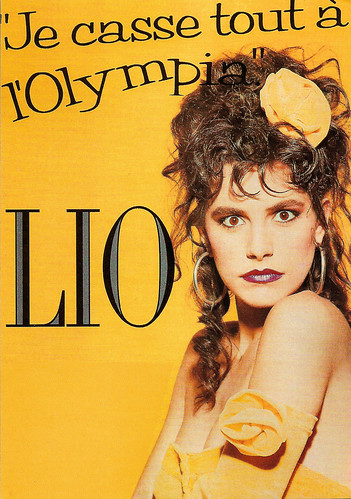 French postcard by Media Com +, no. Record 111. Caption: Je casse tout à L'Olympia (I break everything at the Olympia). 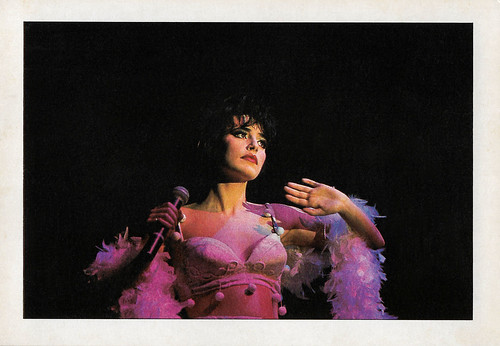