Tall, reedy, thin-browed, light-haired Margaret Leighton (1922-1976) was a British award-winning theatre and film actress. She appeared with her future husband Michael Wilding in the Hitchcock film Under Capricorn (1949). She won two Tony Awards for Broadway performances as Best Actress (Dramatic): in 1957 for 'Separate Tables' and in 1962 for Tennessee Williams' 'The Night of the Iguana'. Leighton received an Oscar nomination and a BAFTA award for her role in The Go-Between (Joseph Losey, 1971). She also won an Emmy Award for a 1970 television version of 'Hamlet'. 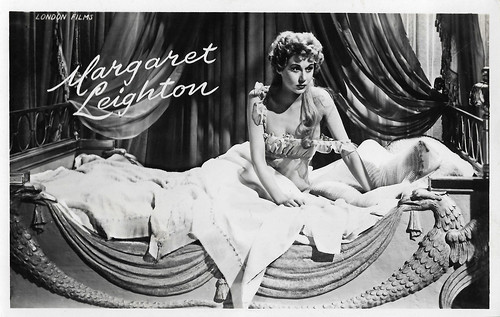 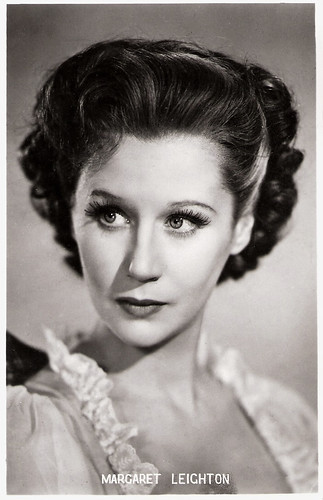 British Real Photograph postcard, no. F.S. 63. Caption: Lovely Margaret Leighton won universal praise for her part as Flora Macdonald in Bonnie Prince Charlie. She is now co-starring with David Niven in The Elusive Pimpernel, an Archer's production for London Films.


Margaret Leighton was born in Barnt Green, Worchestershire, England, in 1922, the daughter of a businessman. Expressing an early desire to act, she quit school at age 15 and auditioned and joined Sir Barry Jackson's Birmingham Repertory Theatre.

Becoming one of his star students, he hired her as a stage manager and offered her the small role of Dorothy in the stage play 'Laugh with Me' (1938). Thereby, the play marked her professional debut on stage. The play was immediately taken to BBC-TV, Laugh with Me (Herbert C. Prentice, 1938). During these productive repertory years, she involved herself in the classical plays by Chekov, Shakespeare, and Shaw.

In 1944, Margaret made her London debut for the Old Vic Company playing the daughter of the troll king in 'Peer Gynt'. Joining the company under the auspices of Sir Laurence Olivier and Sir Ralph Richardson, she earned distinction as a classical stage actress. In 1946, she made her Broadway debut as the Queen in 'Henry IV', starring Laurence Olivier and Ralph Richardson during a visit of the Old Vic to the U.S. The company performed a total of five plays from its repertoire before returning to London.

The opulent actress with the strikingly odd, yet fascinating facial features stole more than a few plays and films away from the stars with her stunning portrayals of neurotic, brittle matrons. Her unique brand of sophisticated eccentricity went on to captivate both Broadway and London audiences with her many theatre offerings, particularly her portrayals of Celia Coplestone in 'The Cocktail Party (1950) and Orinthia in a revival of 'The Apple Cart' (1953). Her New York performance as Mrs. Shankland in Terence Rattigan's drama 'Separate Tables' (1956) earned her a Tony Award.

She returned to Broadway to play Beatrice in William Shakespeare's 'Much Ado About Nothing' in 1959, before returning in 1962 as Hannah in 'The Night of the Iguana' and earning her second Best Actress Tony trophy. She would continue to return to Broadway throughout the 1960s with the plays 'Tchin-Tchin', 'The Chinese Prime Minister', 'Slapstick Tragedy' and the heralded production of 'The Little Foxes (1967)', first playing Birdie before taking over the role of Regina. 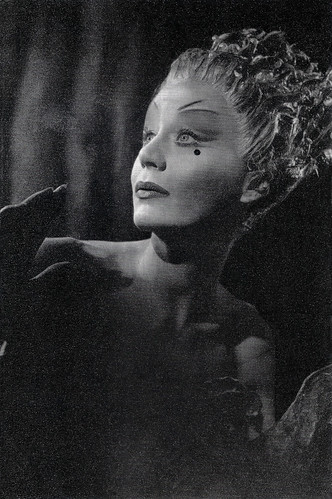 Alternating between films in London and Hollywood


During the 1950s and 1960s, Margaret Leighton would alternate between British and U.S. filming. She made her British debut as Catherine Winslow in Terrence Rattigan's The Winslow Boy (Anthony Asquith, 1948) starring Robert Donat. Then she co-starred opposite David Niven in the period biopic Bonnie Prince Charlie (Anthony Kimmins, 1948).

Hitchcock used her next in one of his lesser-known romantic crime films Under Capricorn (Alfred Hitchcock, 1949) before entangling herself in a romantic triangle with Celia Johnson and Noël Coward in The Astonished Heart (1950), which was both written and directed by Coward.

In the crime film Calling Bulldog Drummond (Victor Saville, 1951), Margaret plays a Scotland Yard sergeant who pulls the master sleuth (Walter Pidgeon) out of retirement to infiltrate a vicious gang together, while in the mystery crime drama, Home at Seven (Ralph Richardson, 1952), the touching drama The Holly and the Ivy (George More O'Ferrall, 1952) and the saucy comedy The Passionate Stranger (Muriel Box, 1957), she reunited with her Old Vic theatre mentor Sir Ralph Richardson.

Richardson was her frequent co-star on both stage and screen. She had played Roxane to his Cyrano in the 1946 London stage revival of 'Cyrano de Bergerac', one of Richardson's greatest stage successes.

Margaret married (1947) and divorced (1955) noted publisher Max Reinhardt (of Reinhardt & Evans), known for his collection of letters and photographs from playwright and novelist George Bernard Shaw. Her second husband would be actor Laurence Harvey who starred in the British crime thriller The Good Die Young (Lewis Gilbert, 1954) in which Margaret made a co-starring appearance as his abused wife. They would marry in 1957. 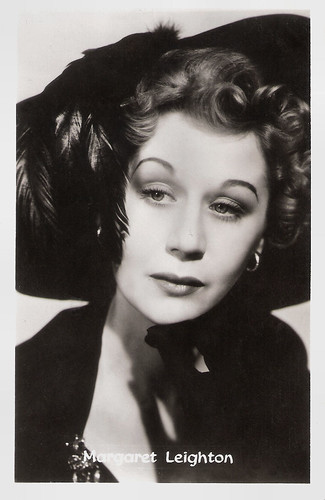 
Margaret Leighton earned her first top cinematic billing as Helen Teckman in The Teckman Mystery (Wendy Toye, 1954) and reunited with David Niven in the military film Carrington V.C. (Anthony Asquith, 1954). Playing a Southern aristocrat in the U.S. filming of William Faulkner's The Sound and the Fury (Martin Ritt, 1959) starring Yul Brynner, she followed that in the 1960s with a co-starring part opposite Peter Sellers in the comedy Waltz of the Toreadors (John Guillermin, 1962) and an all-star American cast headed by Henry Fonda in the potent political drama The Best Man (Franklin J. Schaffner, 1964).

The black comedy The Loved One (Tony Richardson, 1965) and the dramatic 7 Women (John Ford, 1966), playing one of several ladies in peril at a Chinese mission, followed. Appearing in TV-movie versions of literary classics including 'Arms and the Man', 'As You Like It' and 'The Confidential Clerk', Margaret began to make guest appearances on TV programs such as 'Suspicion,' 'Alfred Hitchcock Presents, 'The Alfred Hitchcock Hour', 'Playhouse 90', 'Ben Casey', 'Burke's Law', 'The F.B.I.', 'The Girl from U.N.C.L.E.' and 'Judd for the Defense', in addition to a recurring role on 'Dr. Kildare'.

Divorced from Laurence Harvey in 1961, Margaret's third and final marriage to actor Michael Wilding in 1964 was an enduring matchup. The couple went on to co-star in the period piece Lady Caroline Lamb (Robert Bolt, 1972) starring Sarah Miles. Other notable screen credits around that time include The Madwoman of Chaillot (Bryan Forbes, 1969) and the TV movie Great Expectations (Joseph Hardy, 1974) as Miss Havisham. Margaret would receive her only Oscar nomination for her support role in The Go-Between (Joseph Losey, 1971) starring Julie Christie and Alan Bates as Christie's manipulative, class-conscious mother.

In 1971, Margaret was diagnosed with multiple sclerosis but didn't let it slow her down for quite some time. She continued to perform in such films as Zee and Co. (Brian G. Hutton, 1972) with Elizabeth Taylor, Bequest to the Nation (James Cellan Jones, 1973), and the TV horror offering Frankenstein: The True Story (Jack Smight, 1973).

By 1975 when she was no longer capable of walking, she continued to act giving an over-the-top comic performance in Trial by Combat (Kevin Connor, 1976). Her final TV performance was in the first season of Space: 1999 where she played Queen Arra in the episode "Collision Course. She was awarded the CBE (Commander of the Order of the British Empire) in the 1974 Queen's Birthday Honours List for her services to drama. She breathed her last in 1976 in Chichester hospital in Chichester, Sussex, at the age of 56. Margaret Leighton had no children in any of her marriages. 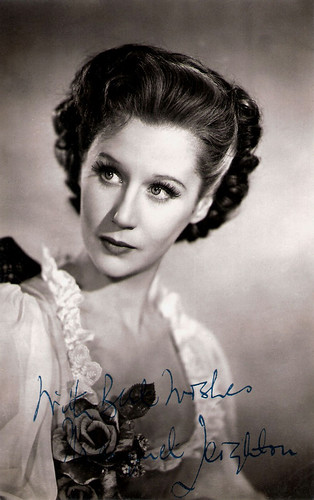