Summer has ended. Let’s extend it a little bit by putting the spotlight on sunshades. Here is a selection of vintage postcards showing film actresses posing with this accessory, which was much in vogue at a time when sun tanning was considered unbecoming and inappropriate for women. 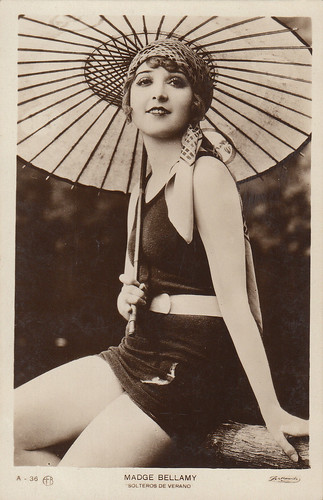 Madge Bellamy (1899-1990), was a “Darling of the Twenties”. That’s the title she chose for her autobiography, published in 1989. She appeared in about fifty silent films and a dozen sound films. Under contract to Thomas H. Ince, she had her breakthrough role in Lorna Doone (1922). Later, she was a star at Fox studios from 1925 to 1929. 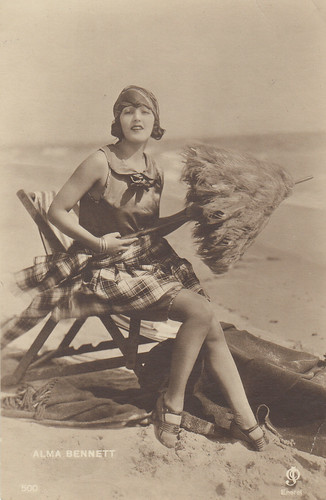 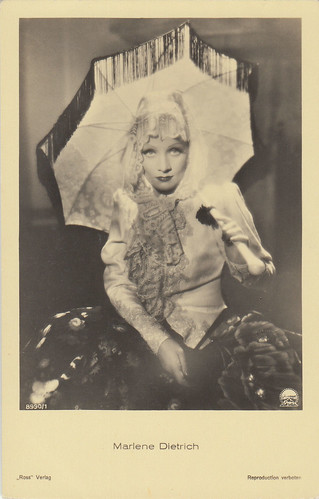 Marlene Dietrich (1901-1992) is regarded as the first German actress to become successful in Hollywood. Throughout her long career, she constantly re-invented herself, starting as a cabaret singer, chorus girl and film actress in 1920s Berlin, she became a Hollywood movie star in the 1930s, a World War II frontline entertainer, and finally an international stage show performer from the 1950s to the 1970s, eventually becoming one of the entertainment icons of the 20th century. 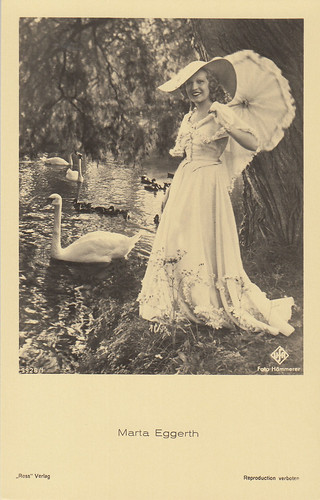 Hungarian-born singer and actress Márta Eggerth (1912-2013) maintained a global career for over 70 years. She was the popular and talented star of 30 German and Austrian operetta films of the 1930s. Many of the 20th century's most famous operetta composers, including Franz Lehár, Fritz Kreisler, Robert Stolz, Oscar Straus, and Paul Abraham, composed works especially for her. After the rise of the Nazis, she continued her career with her partner Jan Kiepura in the US. 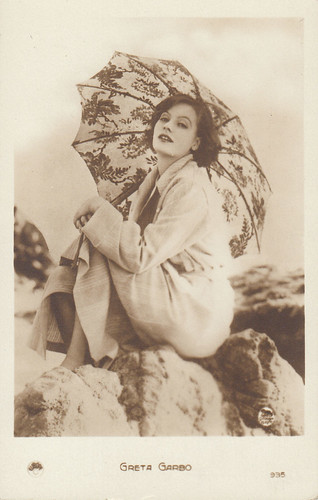 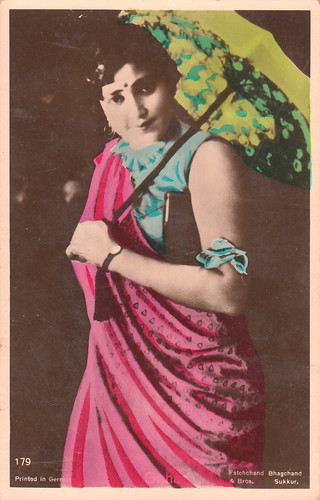 Postcard printed in Germany for Fatehchand Bhagchand & Bros. Sukkur, no. 179. 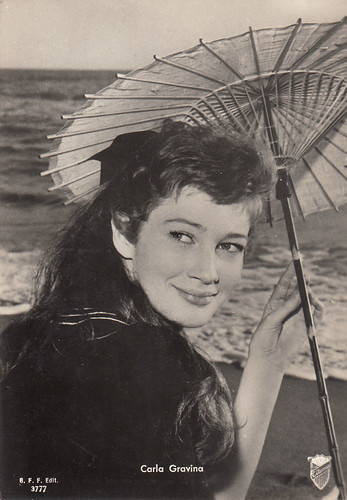 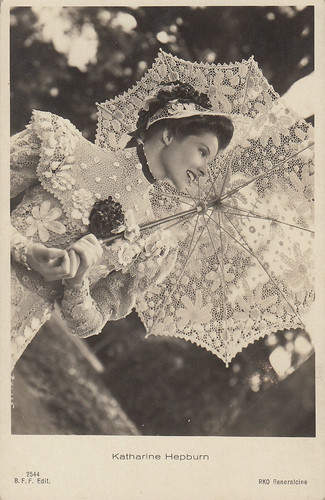 Katharine Hepburn (1907-2003) was an indomitable American stage and film actress, known as a spirited performer with a touch of eccentricity. She introduced into her roles a strength of character previously considered to be undesirable in Hollywood leading ladies. As an actress, she was noted for her brisk upper-class New England accent and tomboyish beauty. During her long career, she won four Best Actress Oscars, for Morning Glory (1933), Guess Who’s Coming to Dinner (1967), The Lion in Winter (1968), and On Golden Pond (1981). 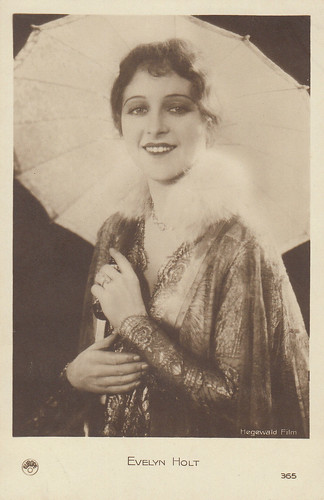 Evelyn Holt (1908-2001) was a highly popular German film actress in the late silent and the early sound era. 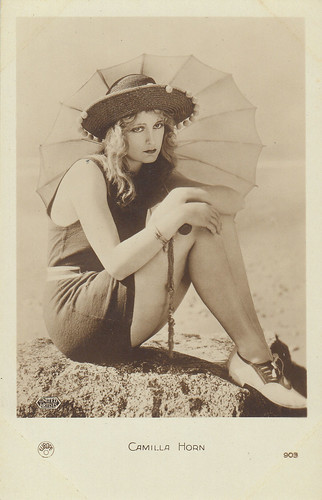 Ethereally blonde Camilla Horn (1903-1996) was a German dancer and film star. Her breakthrough role was Gretchen in the silent film classic Faust (Friedrich Wilhelm Murnau, 1926). She also starred in some Hollywood films of the late 1920s and in a few British and Italian productions. 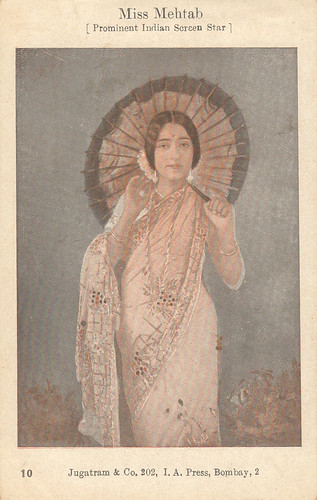 Mehtab (1913-1997) was an Indian film star who mainly worked in the 1930s and the first part of the 1940s. Her films include Veer Kunal (1932), Jeewan Swapna (1937) or Leather Face (1939). Chitralehka (1941) caused a sensation because of her aesthetically done bathing scene, which was considered daring at the time. Her last husband was famous filmmaker Sohrab Modi. 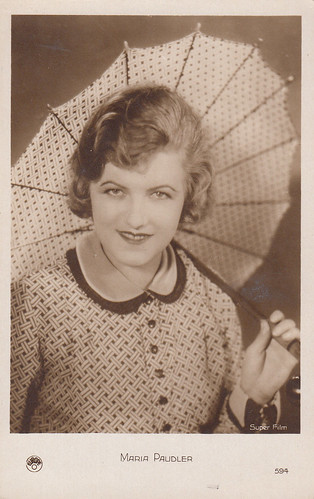 German actress Maria Paudler (1903-1990) was a popular star of the late silent German cinema. She also played the leading role in the first German TV film. 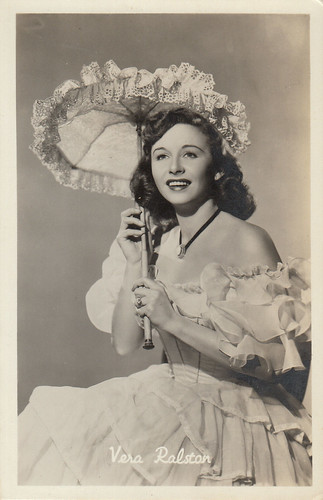 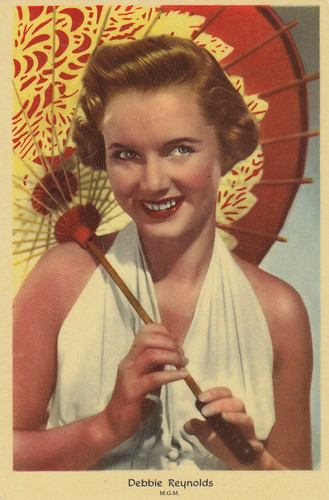 Debbie Reynolds (1932-2016) was elected Miss Burbank in 1948 and made her screen debut the same year. In 1950, she gained notice by playing Helen Kane in Three Little Words and by singing 'Aba Daba Honeymoon', which was a hit on the Billboard charts, in Two Weeks with Love (1950). She had her breakthrough role in Singin’ in the Rain (1952), opposite Gene Kelly and Donald O’Connor. She then starred in twenty-six movies from 1953 to 1968. Afterwards, she was much more active on television than in films. 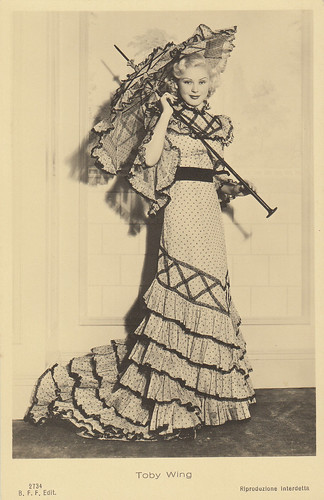 Toby Wing (1915-2001) was one of the cutest 1930s Hollywood blondes. From 1931 on, she had numerous uncredited bit parts and can be seen for example in 42nd Street (1933), in the 'Young and Healthy' number opposite Dick Powell. However, she became a celebrity by endlessly and cheerfully posing for movie magazines. In the second half of the decade, she had leading roles in several B movies such as Thoroughbred (1936), With Love and Kisses (1936) or Sing While You’re Able (1937). She retired from films following her marriage in 1938. 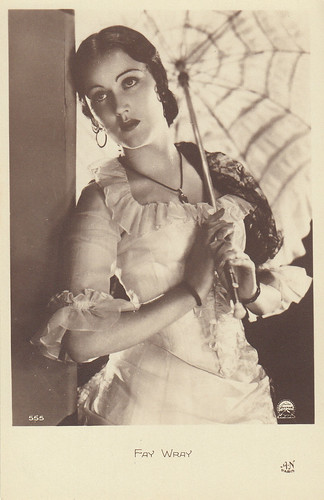 Canadian-born American actress Fay Wray (1907-2004) attained international recognition as the first 'scream queen' in a series of horror films during the early 1930s. Through an acting career that spanned nearly six decades, Wray is best known as Ann Darrow, the girl held in the hand of King Kong (1933). Two days after her death, the lights of the Empire State Building, the location of King Kong's climax scene, were dimmed for 15 minutes in memory of the "beauty who charmed the beast".