Versatile and beloved American actor Jack Lemmon (1925-2001) was a virtuoso in both comedy and drama. He initially acted on TV before moving to Hollywood, cultivating a career that would span decades. Lemmon starred in over 60 films including Some Like It Hot (1959), The Apartment (1960), Irma la Douce (1963), The Odd Couple (1968), Save the Tiger (1973) and Grumpy Old Men (1993). Some of his most beloved performances stemmed from his collaborations with acclaimed director Billy Wilder and with his fellow friend and actor Walter Matthau. 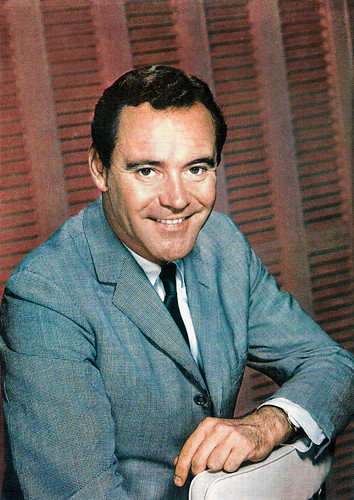 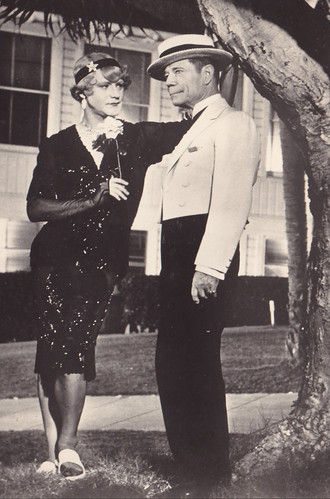 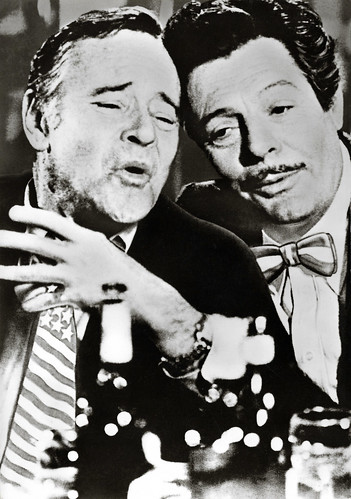 
Jack Lemmon was born John Uhler Lemmon III in 1925, in an elevator at Newton-Wellesley Hospital in Newton, Massachusetts, a suburb of Boston. He was the only child of Mildred Lankford Noel and John Uhler Lemmon, Jr., the president of a doughnut company. He later described his flamboyant, authoritarian mother as 'Tallulah Bankhead on a roadshow.' He laughed about how she used to hang out with her girlfriends at the Ritz Bar in Boston and how she tried to have her cremation ashes placed on the bar (the management refused).

Jack attended Ward Elementary near his Newton, MA home. At age 9 he was sent to Rivers Country Day School, then located in nearby Brookline. After RCDS, he went to high school at Phillips Andover Academy. Lemmon attended Harvard, where he became president of the Hasty Pudding Club, the university's famous acting club. During WW II, he served in the Naval Reserve and was the communications officer aboard the aircraft carrier USS Lake Champlain CV-39.

After serving as a Navy ensign, he worked in a beer hall playing the piano. Then, Lemmon followed his passion for theatre. His father didn't approve of his son taking up acting, but told him he should continue with it only as long as he felt passion for it. Soon, Jack landed small roles on radio, off-Broadway, TV and Broadway. In 1953, he was very successful on Broadway with 'Room Service', after which he went to Hollywood.

He signed a contract with Columbia Pictures. His film debut was opposite Judy Holliday in the romantic comedy It Should Happen to You (George Cukor, 1954). He was loaned to Warner Bros. in 1955 for his fourth film. There, he had his breakthrough as Ensign Pulver in the war drama Mister Roberts (John Ford, Mervyn LeRoy, 1955) starring Henry Fonda and James Cagney. His complex portrayal of this somewhat dishonest but sensitive character earned him the Academy Award for Best Supporting Actor.

Lemmon would go on to work on a number of films with comedian and close friend Ernie Kovacs, including Bell Book and Candle (Richard Quine, 1958) starring James Stewart and Kim Novak. In 1959, Lemmon gave one of the top comedic performances of his career when he starred alongside Tony Curtis and Marilyn Monroe in the romantic comedy Some Like It Hot (Billy Wilder, 1959). He received an Oscar nomination for his role and he did the next year, for The Appartement (Billy Wilder, (1960) in which he co-starred with Shirley MacLaine. This led to several more collaborations with director Billy Wilder and great success on the big screen throughout the 1960s and 1970s. 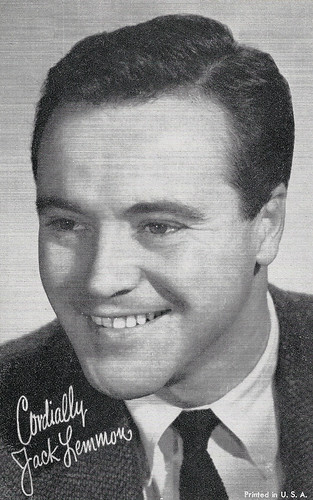 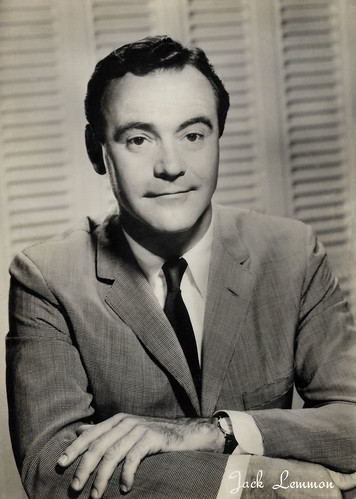 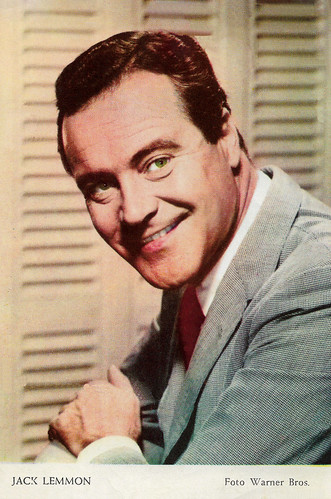 
Jack Lemmon also excelled in drama. He received an Oscar nomination for his role as an alcoholic in Days of Wine and Roses (Blake Edwards, 1962) and later followed more nominations for the dramas The China Syndrome (James Bridges, 1979), Tribute (Bob Clark, 1980) and Missing (Costa-Gravas, 1982). Kyle Perez at IMDb: "Sometimes referred to as "America's Everyman", Lemmon's versatility as an actor helped the audience more closely identify and relate to him. He was able always to elicit a laugh or sympathy from his viewers and his charismatic presence always shined on the big screen. He often portrayed the quintessence of an aspiring man and established a lasting impression on the film industry."

Lemmon reunited with Shirley MacLaine in another Wilder film, Irma la Douce (Billy Wilder, 1963). It was one of the biggest commercial successes for the trio. The Fortune Cookie (Billy Wilder, 1966) served as the start of a comedic partnership between Lemmon and Walter Matthau and the two would come together again, two years later, for The Odd Couple (Gene Saks, 1968), based on a play by Neil Simon. It is one of their most endearing films together.

As the 1970s came around, Lemmon began to undertake more dramatic roles and won the Academy Award for Best Actor for his performance as Harry Stoner in Save the Tiger (John G. Avildsen, 1973). Lemmon admitted to having had a serious drinking problem at one time, which is one reason he looked back on his Oscar-winning role as perhaps the most gratifying, emotionally fulfilling performance of his career. Throughout the 1980s and 1990s, Lemmon continued to excel in his character performances and earned the Cannes Best Actor award for The China Syndrome (James Bridges, 1979) and Missing (Costa-Gravas, 1982). As a director, he made his film debut with Kotch (Jack Lemmon, 1971) and his Broadway debut with Eugene O'Neill's 'Long Day's Journey into Night'.

In 1988 he received the Life Achievement Award from the American Film Institute. In the 1990s, he continued to have success with roles in films such as Glengarry Glen Ross (James Foley, 1992) and Short Cuts (Robert Altman, 1993). In the comedy Grumpy Old Men (Donald Petrie, 1993), he was reunited with Walter Matthau. The film was a huge success, and a sequel was even released in 1995. A sequel to The Odd Couple was also released in 1998. In 1997, he received a Golden Globe nomination for the television adaptation of 12 Angry Men (William Friedkin, 1997).

Jack Lemmon was married twice, first to actress Cynthia Stone (1950-1956) and his second marriage to actress Felicia Farr lasted from 1972 till his death. Jack Lemmon passed away in 2001 in Los Angeles at the age of 76. He had two children, Chris Lemmon (1954) and Courtney Lemmon (1966). Actress Sydney Lemmon is his granddaughter. 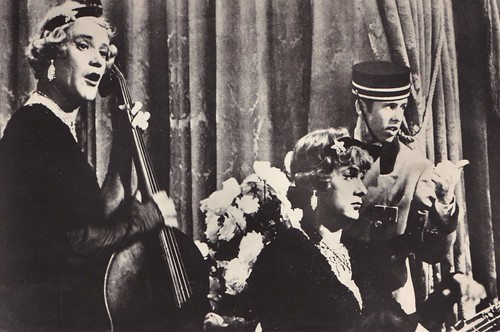 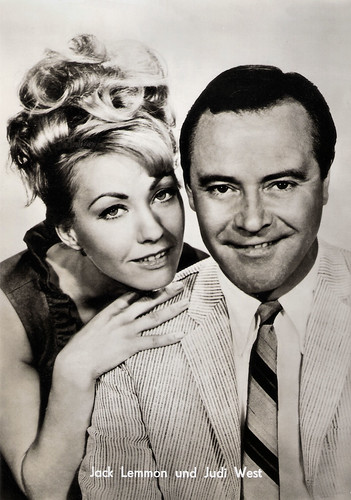 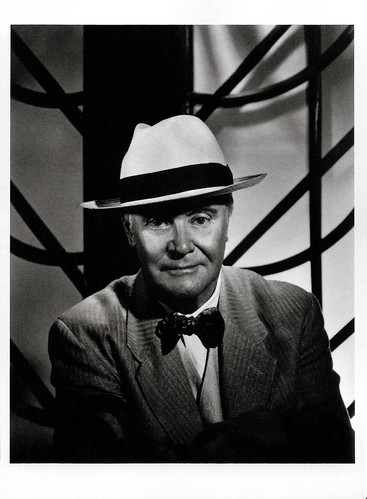