Actress Magda Sonja (1895 - 1974) was one of the divas of the Austrian silent cinema. She often starred in the films of her husband, noted director Friedrich Feher. 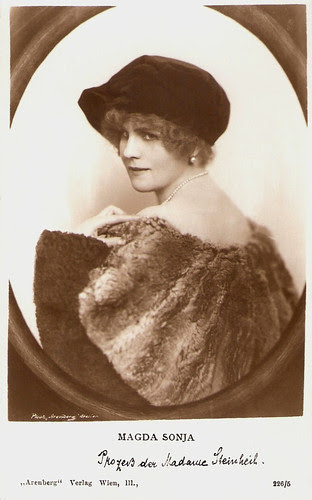 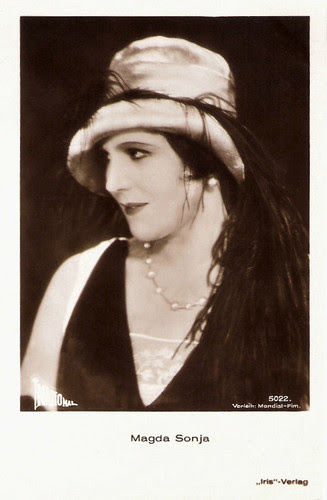 Star-building
Magda Sonja was born in Wien (Vienna), Austria-Hungary (now Austria) in 1895. She started her acting career on stage at the Theater an der Wien. Later she worked as a diseuse in different cabarets of the city. She made her film debut in 1917. From 1918 on the Sacha-film studio built her up as a star as a competitor to the star of the Wiener Kunstfilm, Liane Haid. Sonja appeared in films like Das andere Ich/The Other Me (1918, Fritz Freisler) with Fritz Kortner, and Um ein Weib/Because of a Woman (1918, Ernst Marischka, Hubert Marischka). The Austrian film industry produced more than 1000 films yearly in this period. During the 1920's, she would become the most popular star of Sacha-film and was able to impersonate some impressive leading roles. To her well-known films of the early 1920's belong Die Venus/The Venus (1922, Hans Homma) with Raoul Aslan and Nora Gregor, the Hungarian production Drakula halala/Draculas Death (1923, Károly Lajthay) featuring Paul Askonas, and Ssanin (1924, Friedrich Feher, Boris Nevolin) with Oscar Beregi Sr. and Hans Moser. 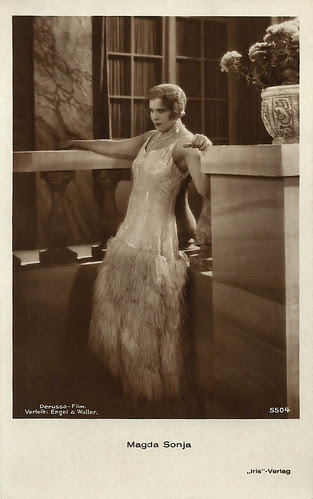 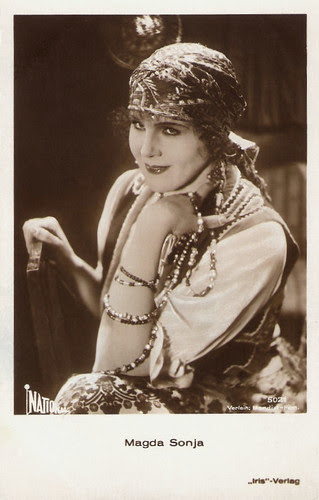 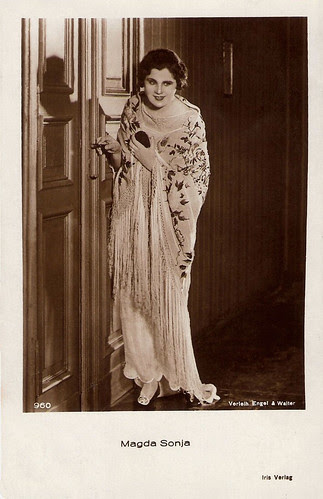 Mata Hari
Magda Sonja achieved the height of her fame when she made a series of films with her husband, actor and director Friedrich Feher, in Germany. She played leading roles in his Das graue Haus/The Grey House (1926) with Werner Krauss, Mata Hari, die rote Tänzerin/Mata Hari, the Red Dancer (1927), and Maria Stuart/Mary Queen of Scotts (1927) with Fritz Kortner. Mata Hari was the first full-length screen treatment of the life of the WW I spy. The film was produced in Germany in 1926, a full decade after the subject's death. Magda Sonja starred as the title character, an exotic dancer whose romance with a Russian grand duke comes to an end when she falls for a handsome peasant, Grigori (Mathias Wieman). In due course, Grigori is arrested and threatened with execution unless Mata Hari agrees to become a spy on behalf of the Russians. Ultimately betrayed by her superiors, Mata Hari nonetheless faces the firing squad with no regrets, secure in the knowledge that her lover has been spared. When released in the U.S. in 1927, Mata Hari was extensively ballyhooed on the strength of Magda Sonja's extraordinarily revealing costumes. Another successful production was Sensations-Prozess/That Murder in Berlin (1928, Friedrich Feher) with Carl Goetz and Gustav Diessl. With the rise of the sound film her career dropped off. To her last films belong Ihr Junge/Her Boy (1931) opposite her son, Hans Feher. In 1933 she emigrated with her husband and son to England, where they made one film together, The Robber Symphony (1936), an alternate version of their earlier film Gehetzte Menschen/Harried People (1932). The Robber Symphony is an anarchistic musical about a gang of robbers who are searching for a treasure, hidden in a pianola. The film became a surprise cult hit in the Netherlands, where it appeared for 20 years in the arthouse cinema De Uitkijk. Outside of the Netherlands the film was not a success and it would be Magda Sonja’s last film. She and Feher emigrated to the United States, but their careers went nowhere in tinseltown. Magda Sonja died in 1974. The Dutch Filmmuseum (now Eye Institute) made a wonderful fresh restaurated copy of The Robber Symphony in 2006, which was broadcasted on Dutch television. Director Cherry Duyns made a TV documentary about the Dutch success of the film and the sad werdegang of the Feher family in Hollywood.

My name is Suzanne Feher-Levy; Magda Sonja was my grandmother. I am amazed to find there is still interest in her, her husband "Fritz" Weiss-Feher and her son Hans "John." It is indeed sad they were unable to make the transition in this country and continue to be active in the industry they so loved. They were beautiful, gifted and unfortunately very tragic.

Thank you so much for your comment. Here in Amsterdam in the Netherlands, The Robber Symphony is a legend. For decades the film was yearly shown in the little art-house cinema De Uitkijk at one our old canals. Both your father as Giannino and the film are in the hearts of many Dutch filmgoers.