Beautiful Beth Rogan (1931-2015) was a British starlet for the Rank studio of the late 1950s and early 1960s. At the time she was better known for her glamorous looks and her jet set marriages than for her few film roles. Her most entertaining film was the fantasy Mysterious Island (1961) in which she played a sexy, shipwrecked aristocrat among soldiers, pirates and giant monsters. 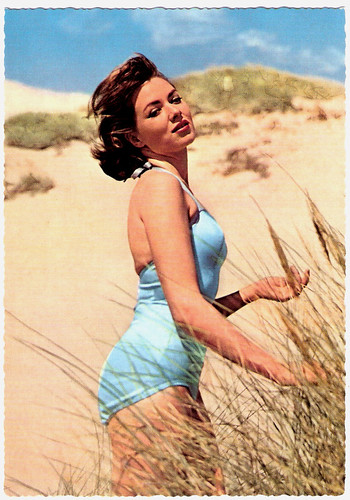 
Beth Rogan was born as Jennifer Puckle in Walmer, England in 1931 (some sources say 1935). She was the daughter of Kenneth Alfred Bridge Puckle, a major of the Royal Marines.

She attended the Wimbledon School of Arts, but married young. Early married life in a top-floor flat in Wimbledon, she found rather boring. Her landlady was impressed by her looks and figure, and suggested her a modeling school. Rogan started a career as a freelance illustrator and augmented her earnings by modeling.

The Rank Organization signed her, and she made her film debut in a bit role in the Norman Wisdom comedy Up in the World (John Paddy Carstairs, 1956). More uncredited bit roles followed in such comedies as Doctor at Large (Ralph Thomas, 1957) starring Dirk Bogarde, The Admirable Crichton (Lewis Gilbert, 1957) with Kenneth More, and Just My Luck (John Paddy Carstairs, 1957).

The young starlet posed for Rank’s Christmas 1957 publicity pictures and the following year she graced the November cover of Picturegoer. She created quite stir with a bit role in the comedy The Captain’s Table (Jack Lee, 1959). In a 2006 interview with The Daily Mail she remembered: “the first bikini I donned was a beautiful white one in the 1958 film The Captain’s Table (...). It had heavily padded bosoms and caused quite a stir as it was thought to be very racy to be seen wearing a bikini, especially on the big screen.”

She then had her first leading lady part in the B-film Innocent Meeting (Godfrey Grayson, 1959), a crime drama about a love affair between a middle class girl and a working class boy (Sean Lynch). The script was co-written by Brian Clemens, who later wrote and produced such great TV series as The Avengers (1965-1969) and The Professionals (1977-1983).

However, Rogan's lead was followed by a bit part as a barmaid in the comedy Operation Cupid (Charles Saunders, 1960) and a minor role in another comedy Sands of the Desert (John Paddy Carstairs, 1960). Then followed another leading role in the crime drama Compelled (Ramsey Herrington, 1960). 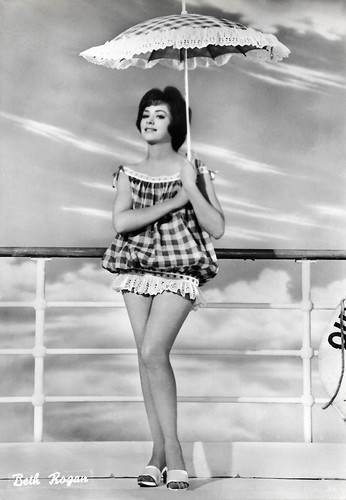 Italian postcard by Bromofoto, Milano, no. 1689.


Beth Rogan’s most memorable film is the entertaining fantasy film Mysterious Island (Cy Endfield, 1961). The film was loosely based on a novel by Jules Verne, who was a hot property at the time because of Walt Disney’s smash hit 20,000 Leagues Under The Sea (Richard Fleischer, 1954), Michael Todd’s enormous 70 mm roadshow Around the World in Eighty Days (Michael Anderson, 1956), and George Pal's spectacular Journey to the Center of the Earth (Henry Levin, 1959).

Mysterious Island tells about American Civil War soldiers who escape from prison in an observation balloon during a storm, but they are blown off course. The soldiers land on a mysterious South Pacific island, where they encounter such monsters as a giant crab, an enormous killer bee and a prehistoric creature (all created by special effects master Ray Harryhausen). On the island they also meet pirates and Captain Nemo (Herbert Lom) with his hidden nautilus submarine.

Rogan played a young aristocratic lady who was shipwrecked at the island and falls for one of the soldiers. In his post on Rogan at his former blog Cavegirls in Fur Bikinis, ‘Legatus Hedlius’ described how the soldiers and Beth find a cave to live in, when their stay on the island lengthens: “Although she starts off in appropriate Victorian clothes she soon runs herself up a very natty little doeskin microshorts and minidress number which certainly qualifies in my book as cavegirl attire.”

During the filming, Rogan fell from a horse and was bruised in areas uncovered by ‘micro shorts’, so she was forced to go undercover for a while. Mysterious Island was successful in the United States and became one of the top 10 moneymakers in England. Completely dressed, Rogan appeared in Playboy magazine in their pictorial 'The Girls of London' in the October 1962 issue.

That same year she married Hon. Anthony Gerald Samuel, son of Sir Walter Horace Samuel, the 2nd Viscount Bearsted, and Dorothy Montefiore Micholls, a grandson of the founder of Shell. Samuel was a racehorse owner and publisher of English humorist P. G. Wodehouse. From then on she spent her summers as a jetsetter on yachts off the Italian and French Riviera.

She divorced Samuel in 1966, and that same year she married Mercy Haystead. In 1968 she made her last film, the American production Salt and Pepper (Richard Donner, 1968), a crime comedy with Sammy Davis Jr. and Peter Lawford. Then Rogan retired completely from the screen.


Hilarious scene from Just My Luck (1957) with Norman Wisdom creating chaos in a hospital and Beth Rogan as a sexy nurse who's accidentally stripped down by him to her scanties. Source: 0swproductions0 (YouTube).

Sources: Sadie Nicholas (Mail Online), Legatus Hedlius (Cavegirls in Fur Bikinis - closed *), Ryan Harvey (The Realm of Ryan - closed), Jim Rodkey (The Fantastic Films of Ray Harryhausen - restricted), Glamour Girls of the Silver Screen, and IMDb. I updated this post on 2-12-2019; since 2012 many blogs have vanished.