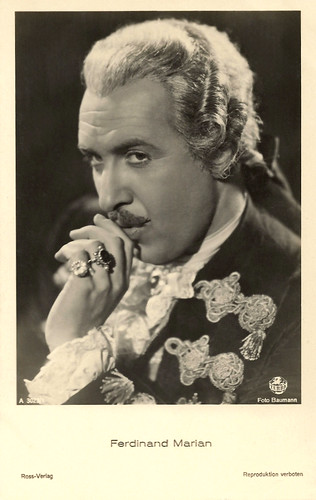 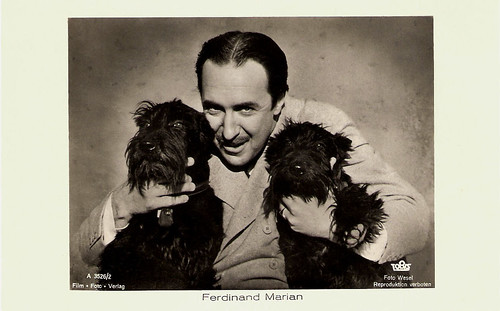 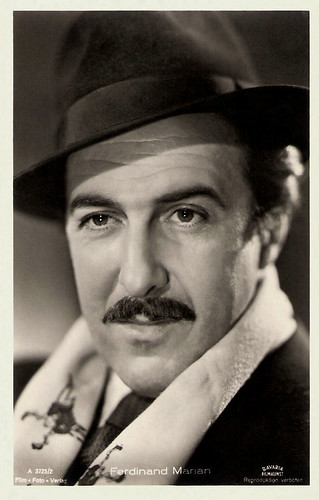 
Ferdinand Marian was born as Ferdinand Haschkowetz in Vienna in 1902. His father was a bass player and his mother an opera singer. Marian turned to the stage early, though he never attended any drama classes. He ran away from home and abandoned his studies as an engineer to work as an theatre extra.

He started his career at the Stadttheater in Graz and later he was employed at the Münchener Kammerspiele. In 1938 he joined the ensemble of the Deutsches Theater in Berlin, where he was acclaimed for his performance as Iago in William Shakespeare's 'Othello'.

In 1933, Marian made his film debut as an agitator in the Sci-Fi film Der Tunnel/The Tunnel (Kurt Bernhardt a.k.a. as Curtis Bernhardt, 1933) starring Paul Hartmann.

From then on, he appeared in more films, including Ein Hochzeitstraum/A Wedding Dream (Erich Engel, 1936) with Ida Wüst, Die Stimme des Herzens/The Voice of the Heart (Karl Heinz Martin, 1937) starring Beniamino Gigli, and Madame Bovary (Gerhard Lamprecht, 1937), at the side of the legendary silent film star Pola Negri.

He had his breakthrough starring together with Zarah Leander in the Ufa melodrama La Habanera/Cheated by the Wind (Detlef Sierck a.k.a. Douglas Sirk, 1937). His role as Don Pedro added to his image as an adorable but devious womaniser.

The following years he starred as elegant villains and ladykillers in such films as the adventure Nordlich/Northern lights (Herbert B. Fredersdorf, 1938) opposite René Deltgen, the crime film Der Vierte kommt nicht/The Fourth is not (Max W. Kimmich, 1939), and the anti-British propaganda film Der Fuchs von Glenarvon/The Fox of Glenarvon (Max W. Kimmich, 1940) with Olga Tschechova.

As Thomas Staedeli writes at Cyranos, his parts were pinned down to villains, a cliché which would determine his destiny. 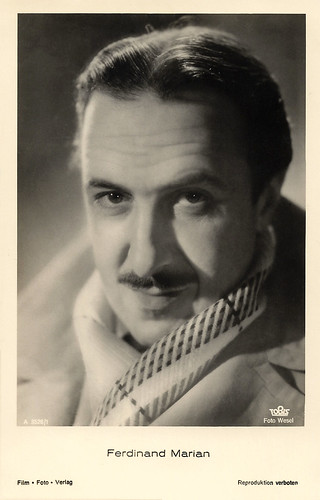 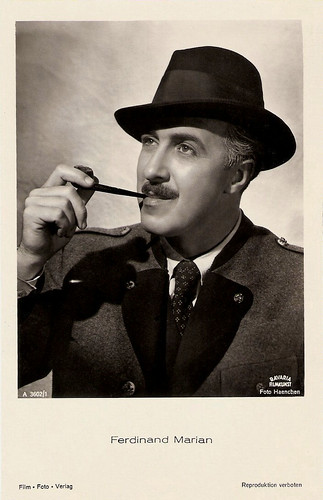 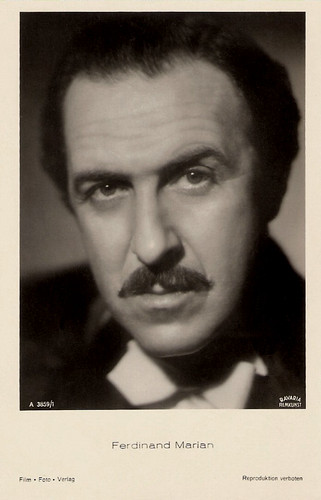 
Ferdinand Marian's shining career would be overshadowed by his appearance as the title character in the notorious anti-Semitic Jud Süß/Jew Süss (Veit Harlan, 1940). This film, made under the supervision of Nazi Propaganda Minister Dr. Josef Goebbels, is widely considered to be one of the most hateful depictions of Jews in film.

Jud Süss is very loosely based on the historical personage of Josef Süss Oppenheimer who, in the early-18th century became a financial adviser to Duke Karl Alexander of Württemberg, with the authority to collect taxes. This, naturally, did not endear him to the Duke's subjects. When Karl Alexander suddenly died, Süss was put on trial and was hanged.

Several film stars had rejected the title role in the film, including Emil Jannings who had stated that he was too old and too fat for the role. For a year Marian also refused to play the part, but he was afraid of the public humiliation that he might have to face if he continued to refuse, and Goebbels eventually talked him into it. According to Androom Archives: “Marian returned to his apartment, got drunk and smashed his furniture, but there was no escape anymore.”

Marian’s depiction of Süss followed Nazi propaganda stereotypes of Jews as being materialistic, immoral, cunning and untrustworthy. However, he gave a well-acted, multi-layered performance, which ultimately contributed to the film's convincibility.

In his excellent review of Jud Süss on Film Reference, Josef Škvorecký writes: “One of the paradoxes of this sinister film is how many participants in the violently racist project had either Jewish spouses or relatives, were disciples of Jewish artists and known friends or Jews, or had been — before the Nazi takeover — left-leaning intellectuals, even communists (such as Heinrich George, who eventually died in a Soviet concentration camp). Thus (...) Ferdinand Marian, who played the title role, had a half-Jewish daughter from his first marriage. His second wife Maria Byk had been married to a jew (the director Julius Gellner), whom Marian hid in his house.” Jud Süss was seen by more than twenty million people and sealed Marian’s fate. 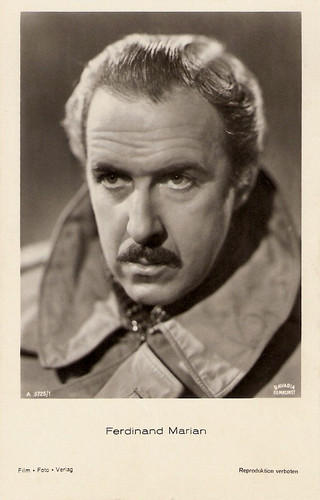 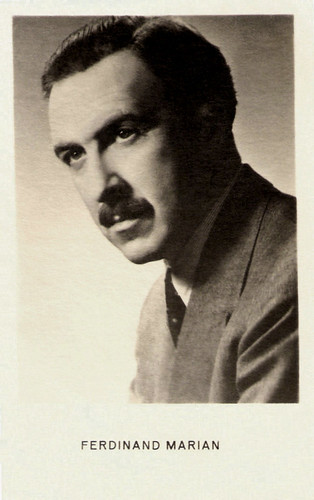 
Ferdinand Marian appeared in a third propaganda film, Ohm Krüger/Uncle Kruger (Hans Steinhoff, 1941) opposite Emil Jannings who played the historical president of the Transvaal and leader of the Boers during the Boer War.

In 1943 Marian appeared in the non-political romantic drama Romanze in Moll/Romance in a Minor Key (Helmut Käutner. 1943) about a love triangle with Marianne Hoppe and Paul Dahlke. That year he also starred as Cagliostro in the lavish fantasy spectacle Münchhausen/Baron Munchhausen (Josef von Báky, 1943) featuring Hans Albers.

Other films in which he appeared during the war years were Reise in die Vergangenheit/Travel into the past (Hans H. Zerlett, 1943), Freunde/Friends (E. W. Emo, 1944) and Die Nacht der 12/The Night of the Twelve (Hans Schweikart, 1945).

After the war he fled to Austria, but he wasn't allowed to continue his career. In 1946 he seemed to get another chance when he was invited to play in Weimar. But he was warned by the Americans and hesitated to come.

Ferdinand Marian died in a road accident in 1946 near the village of Dürneck (today part of Freising) in Bavaria, probably driving under the influence. It is said that he was on his way to Munich with a borrowed car to collect denazification papers that with the permission by US film officer Eric Pleskow would allow him to work again, having celebrated this news just beforehand. Other sources suggest that the accident was suicide. In 1949, soon after the trial of Veit Harlan, Marian's widow Maria Byk was found drowned in Hamburg.

The 2010 film Jud Süss - Film ohne Gewissen/Jew Suss: Rise and Fall (Oskar Roehler, 2010) portrayed the production process of Jud Süß with Marian (played by Tobias Moretti) as the central character. It was nominated for the Golden Bear at the 60th Berlin International Film Festival, although the film received poor reviews in Germany, reproached with factual inaccuracies, clichés and stereotypical characters. 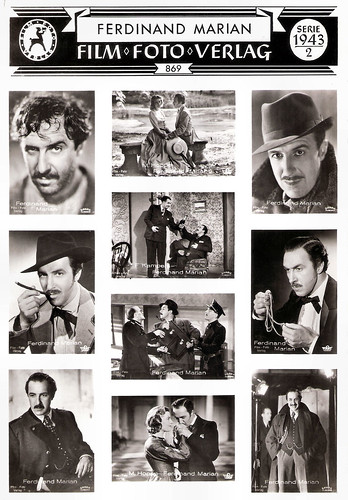 Such a tragic life. Actors and directors under the Nazis had many difficult choices to make. Fascinating article Bob