Italian actor Domenico Serra (1899-1965) was a celebrated star of the Italian silent cinema. For over four decades he played in a total of 67 Italian films. 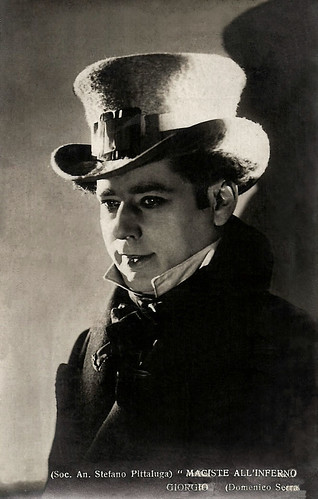 Propagandistic Period Piece
Domenico Serra was born in Crescentino, Italy in 1899. He debuted in film as a 14-year-old in the Ambrosio production Amor di regina/A Queen’s Love (1913, Guido Volante) starring Mary Cléo Tarlarini. For years he played at Ambrosio, first in shorts such as comedies with Gigetta Morano, but soon also in feature films. These were dramas directed by such directors as Carlo Campogalliani, Gero Zambuto and Giuseppe Pinto. A good example is the propagandistic period piece Romanticismo/Romance (1915, Carlo Campogalliani, Arrigo Frusta), starring Tullio Carminati and Helena Makowska. After a large series of films at Ambrosio, Serra hopped from one company to another, as of 1917: Aquila, Latina Ars, Savoia, Edison Film, Electa Film, Gladiator Film, Film D’Eccezione, Rodolfifilm. He played opposite actresses as Antonietta Calderari, Fabienne Fabrèges, Linda Pini, and - in particular in the late 1910's and early 1920's - Mercedes Brignone. Between 1919 and 1923 Eleuterio Rodolfi directed Serra and Brignone in several films, including La maestrina/The teacher (1919) and Federica d’Illiria (1919) with Henriette Bonard. Later on Rodolfi also produced many films with Serra and Brignone, which were directed by Guido Brignone, such as Il quadro di Osvaldo Mars/The framework of Osvaldo Mars (1921). Serra played the title role as a young painter obsessed with his model, though Mercedes Brignone, as the vengeful countess mistaken for his model (a double role by Brignone), is the real protagonist of the film. In 1922 Serra went to Spain to act in El martirio de vivir/The Martyrdom of Living (1922, Enrique Santos). Although director Enrique Santos was Spanish, he had mainly been active for the Italian Cines company. Serra also played Renzo opposite Emilia Vidali as Lucia in the 1922 adaptation of Alessandro Manzoni’s classic novel I promessi sposi/The Betrothed, directed and produced by Mario Bonnard. In the Lombardy of the 17th century, the evil local lord Don Rodrigo, barriers the love between Renzo and Lucia. The two beloved have to leave their hometown and face many difficulties. Sets for the film were designed by noted painter Camillo Innocenti. 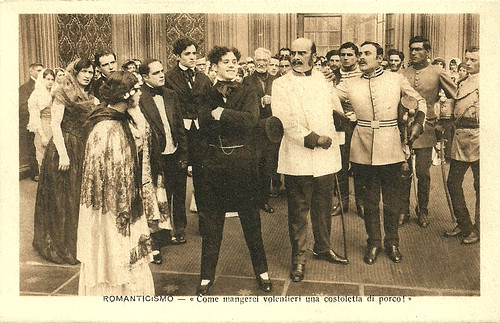 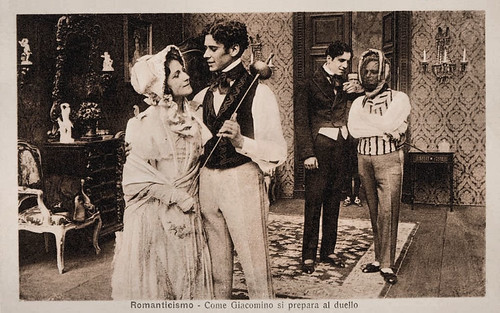 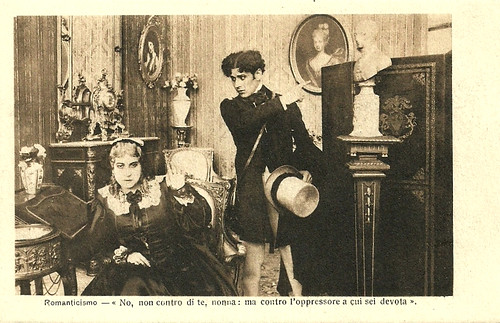 Italian postcard by IPA CT, no. 743. Photo: Soc. Anon. Ambrosio, Torino. Publicity still for Romanticismo (1915, Carlo Campogalliani, Arrigo Frusta) with Mary Cleo Tarlarini. Caption: No, grandmother, not against you; but against the oppressor to which you are devoted.

Maciste in Hell
In the early 1920's, Domenico Serra often played with the Fert company in films with the acrobatic Saetta (Domenico Gambino), such as Il capolavoro di Saetta/The masterpiece of Saetta (1923, Eugenio Perego) and Caporal Saetta/Corporal Saetta (1924, Eugenio Perego). Together with such Fert regulars as Franz Sala, Pauline Polaire and Elena Sangro, Serra played in Maciste all’inferno/Maciste in Hell (1925, Guido Brignone), starring Bartolomeo Pagano as strong man Maciste. The film has an absurd plot. Pluto, king of the Underworld, sends his aid Barbariccia (Sala) to Earth to gather souls, but both Maciste and his neighbor Graziella (Polaire), living in the Piemontese Alps, resist the devils. Barbariccia has a young man, Giorgio (Serra), seduce Graziella and leave her with a child. Maciste forces Giorgio to return and he also saves the child from the clutches of Barbariccia. Then Maciste falls down a trap and ends up in hell, where Proserpina (Sangro) turns him into a devil by kissing him. Barbariccia, jealous, organizes a revolt against Pluto, but Maciste conquers the rebels. Pluto thanks Maciste by breaking his spell and sending him back to earth. Proserpina cannot let him go and chains him to a rock but at Christmas night Graziella’s child frees him. In 1925 the film was shown to thousands of visitors at the Milan Fair before it was officially released in the Italian cinemas in 1926. 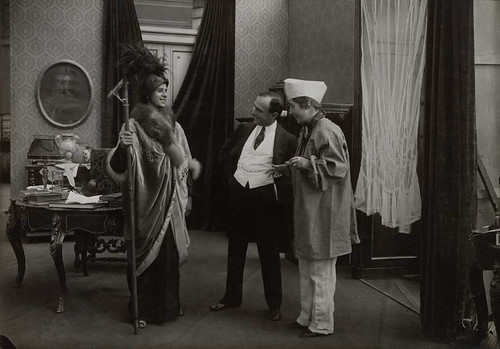 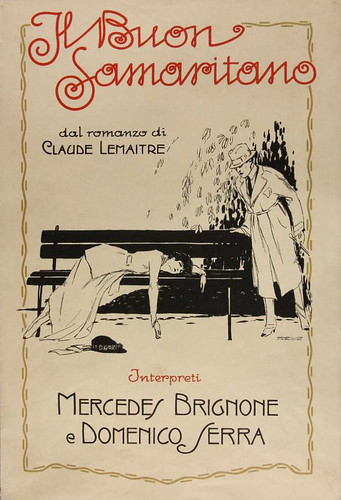 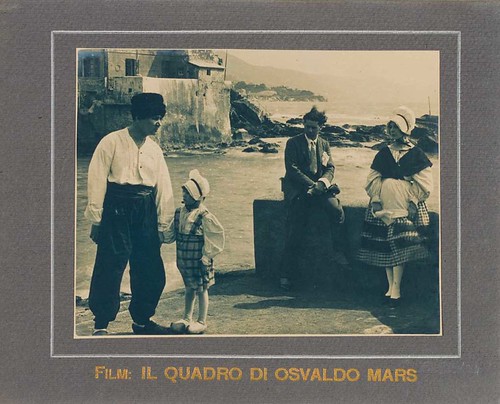 Historic Merry-go-round
Strangely enough, Domenico Serra played afterwards only a small part in the epic and propagandistic historic merry-go-round I martiri d’Italia/The martyrs of Italy (1927, Domenico Gaido), which culminated with the fascist March on Rome. Then again, fewer and fewer fiction films were made in Italy by the late 1920's. He had a tough transition from silent to sound film due to his high-pitched voice. He had a 12 year drought between 1927 and 1939 when he appeared in only one film, Acciaio/Steel (1933, Walther Ruttmann) with Isa Pola. His parts were no leads anymore, but from 1939 on, Serra consistently played in one or two films per year. These include the drama Cuori nella tormenta/Tormented Hearts (1939, Carlo Campogalliani) with Dria Paola, the remake of I promessi sposi/The Betrothed (1941, Mario Camerini) with Gino Cervi as Renzo, and the comedy Se io fossi onesto/If I were honest (1942, Carlo Ludovico Bragaglia) starring Vittorio De Sica and Maria Mercader. In the postwar years Serra continued to act in films, generally in bit parts. He only had one more substantial part, in the adventure film Jolanda, la figlia del corsaro nero/Jolanda, the Daughter of the Black Corsair (1954, Mario Soldati) starring May Britt and Renato Salvatori. Serra played his last film part in Canzone proibita/Forbidden song (1956, Flavio Calzavara) with Claudio Villa. Domenico Serra died of a heart attack in Rome in 1965. He was 66 years old. 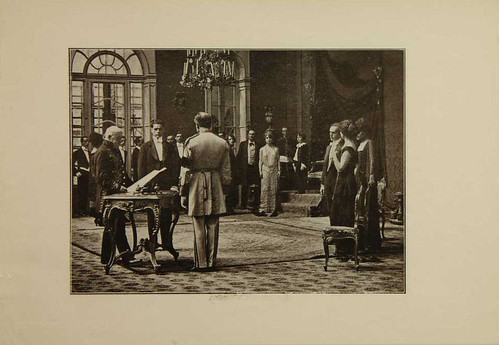 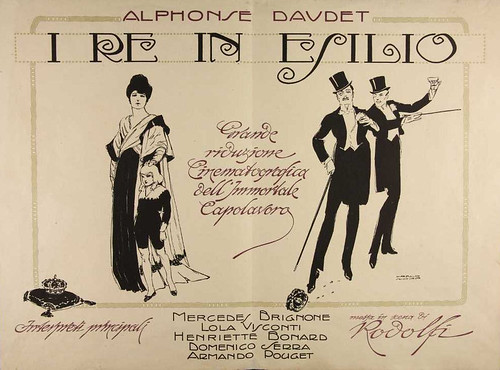 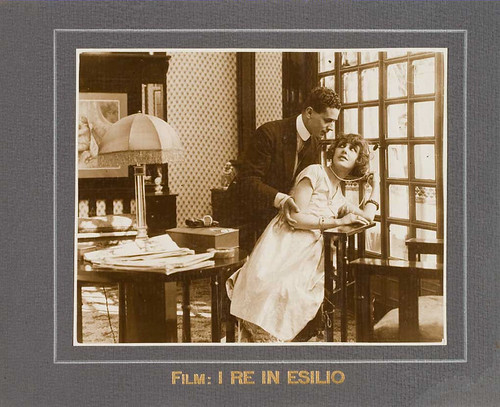 N.B. Recording artist/songwriter/performer Gino Federici, grandson of Domenico Serra, contacted us after an earlier post. He generously shared scans of stills, posters and a postcard of his grandfather's films, which you can see here above. Many thanks, Gino!