Gorgeous Anita Lindblom (1937) is an iconic Swedish singer and actress, who starred in several Swedish entertainment films. She was one of Sweden’s and Germany’s most popular pop artists of the 1960s. Her hit Sånt är livet (That's life) (1961) is an evergreen in Scandinavia. 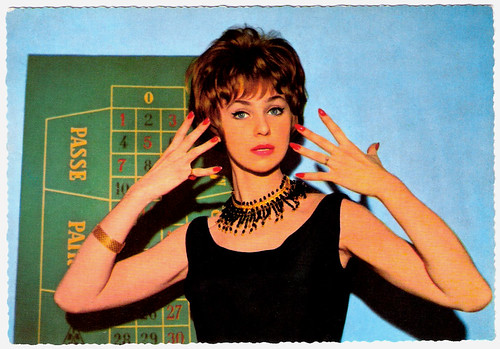 The Daughter of Zarah Leander

Anita E. Lindblom was born in Hille, Sweden in 1937. Her parents were Elsy Kristina and Karl Erik Bruno.

She studied ballet and piano. Very young, she married her dance teacher Sven Aage Andersen Lykke with whom she had a son, Jörgen (1955). The marriage soon ended in a divorce.

In 1957 she had her breakthrough in the Scalarevyn (Scala revue) in which she sang 'När den svenska flickan kysser, kysser hon med öppen mun' (When you kiss a Swedish girl, kiss her with open mouth).

She was a versatile artist, who did a lot more than just her revue work. She made her film debut in the comedy Räkna med bråk/Expect trouble (Rolf Husberg, 1957).

It was followed by more parts in such entertainment films as the comedy Åsa-Nisse i full fart/Åsa-Nisse at Full Speed (Ragnar Frisk, 1957), and the thriller Mannekäng i rött/Mannequin in Red (Arne Mattsson, 1958) starring Anita Björk.

She got a record contract and made a Swedish version of Édith Piaf's 'Milord'. It became Lindblom’s first hit. It was followed by other successful covers - such as 'Lili Marlene' and 'Gigi L'amoroso'.

In 1961 she performed Sånt är livet (That's life) with Sven-Olof Walldoffs orchestra, a cover of Roy Hamilton’s You Can Have Her (1961). Stig Andersson had written the Swedish text to the melody by Bill Cook, who was Roy Hamilton's manager.

The success was a historic mile pole in the Swedish entertainment history. The song has been voted as the greatest Swedish pop song of all time. Her German version Lass die Liebe aus dem Spiel (1962) was also a great success and became a silver and golden record.

Lindblom became as known in Germany as she was in her home country Sweden. The Germans called her lovingly 'the daughter of Zarah Leander' because of her deep, memorable voice. With Lill-Babs, Vivi Bach, Lill Lindfors, and Siw Malmqvist, she belonged to a generation of Scandinavian ‘imports’ who had successful careers in Germany during the 1960s. 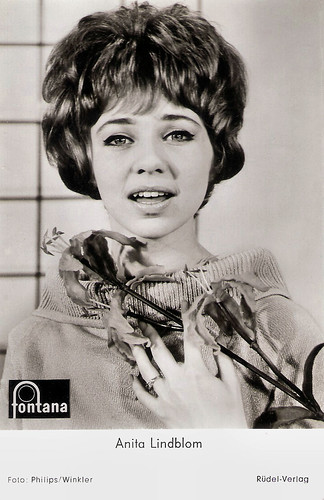 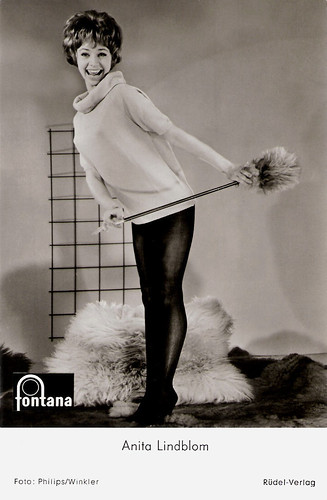 In Scandinavia, Anita Lindblom performed in film, radio, and television as well as in folk-music-halls and parks. She was the star of the comedy Tre dar i buren/Three days in the cage (Ragnar Frisk, 1963), the musical Blåjackor/Sailors (Arne Mattsson, 1964) with Dirch Passer, and the romantic drama En kärlekshistoria/A Swedish Love Story (Roy Andersson, 1970).

In 1968 she was chosen as Woman of the Year in Sweden and she won the Anna Lisa award, the Swedish Oscar.

The artist was always surrounded by myths and scandals. Between 1966 and 1970 she had a stormy marriage with boxing champion Bo Reine Högberg, got into tax trouble, and fled from Sweden in the late 1960s.

Lindblom had bad nerves and her many breakdowns were constant fodder for the gossip columns. She returned to Sweden to star in the film Rännstensungar/Guttersnipes (Torgny Anderberg, 1974) opposite Dutch singer Cornelis Vreeswijk. She also made a highly acclaimed restaurant show at Hamburger Börs in Stockholm.

For a time she lived with actor and director Gunnar Hellström. Lindblom retired again from the spotlights in the early 1980s. She felt persecuted by the media with their articles on her tax troubles, romances, and collapses.

Since then she has received several offers to make a comeback, but she declined them all. For long she resided near Cannes in France and she has not visited Sweden for many years. In France, she incidentally performed as a singer and she wrote her memoirs, 'Anita'.

She was going to move on to the U.S. to start a new career there, but a Swedish firm demolished her piano and other furniture during the move. Therefore she decided to stay in France.

Nowadays, Anita Lindblom lives quietly with her cat in a small studio in Theoule-sur-Mer in the South of France.


Anita Lindblom sings Sånt är livet (You can have him). Source: Moggeford (YouTube).

The﻿ only swedish song that actually good in swedish...hahaha! she nailed it.

The new bio-pic sounds interesting. Looking forward to it