Claude Mérelle was a French film actress of the silent era. She is best remembered as the evil Milady de Winter in Les trois mousquetaires/The Three Musketeers (1921). 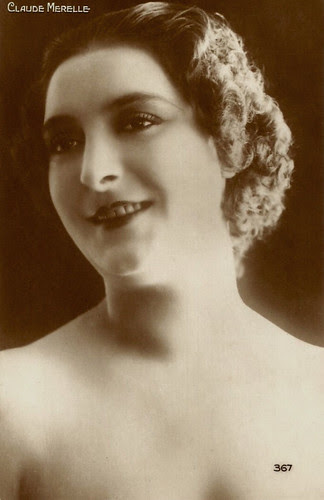 French postcard by Ed. Cinémagazine, no. 367.

Evil Woman
Claude Mérelle was born as Lise Henriette Marie Laurent at Colombes in the Hauts-de-Seine region, in France, in 1888. She first started to act under her own name Lise Laurent. As of 1912 she was a film actress at the Gaumont company, playing in numerous silent shorts mainly directed by Louis Feuillade, but also by Gaston Ravel and Léonce Perret. She also played at Le Film d’Art and Pathé in films by Henri Pouctal. Her film debut was Les noces siciliennes/The Sicilian wedding (1912, Louis Feuillade). In Ravel’s films she played often with Musidora and at Pouctal’s, e.g. Pêcheur d’Islande/Fisherman in Iceland (1915, Henri Pouctal) with Romuald Joubé and Camille Bert. At Feuillade’s the cast was more diversified, including Marcel Levesque, Edouard Mathé, Musidora, Maurice Poitel, Jean Jacquinet and Gabriel Signoret. For Perret she played in an adaptation of The Fourse Horsemen of the Apocalypse by Blasco Ibanez, entitled Debout les morts!/Standing the dead! (1916, André Heuzé, Léonce Perret, Henri Pouctal). After 1916, when she played mainly in feature films, Lise Laurent dropped her real name and continued acting as Claude Mérelle. She obtained a first major role in the Emile Zola adaptation Au Travail/At Work (1919, Henri Pouctal). She played Fernande Delaveau, the evil woman whose addiction to luxury means the downfall of the factory and its workers; she even pushes others to murder. 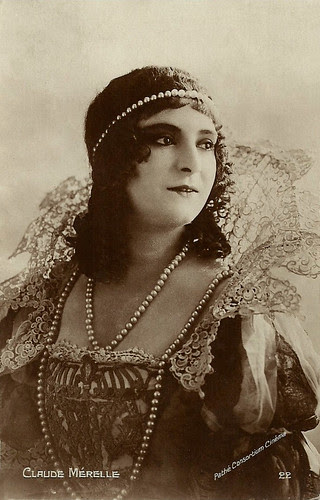 The Three Musketeers
Claude Mérelle remained the bad girl as Milady de Winter in Henri Diamant-Berger’s Les trois mousquetaires (1921). “Most striking is Claude Mérelle sinister portrayal of the venomous Milady de Winter, a creation which must rank as one of the all-time greatest female villains in film history”, David Holm writes on Divxclasico. While Diamant-Berger deliberately shot in authentic locations (the fortified city of Perouges, the cathedral of Chartres, the church of Montbazon, and various ancient French castles), he had Robert Mallet-Stevens design the sets at the Vincennes studios. This all added up to the production value of the film. The film was launched with an unheard marketing campaign, while it was projected in some 60 cinemas around the country. Because of its serial format of 12 weekly episodes, many French cinemas showed the film for several months in a time when films weekly changed. In the United States the film was boycotted because of their own version, The Three Musketeers (1921, Fred Niblo) with Douglas Fairbanks. The French worked their way around it by cutting back the 12 episodes into an 8-reel film called Milady (1923). NB. IMDb and other sources list Milady as a separate film, but in fact it was just the shorter version of Les trois mousquetaires. The New York Times (22/1/1923) raved about Mérelle’s performance: “This woman is the pivot of the story, and as impersonated by Claude Merelle she is its true and vital centre. American "vampires" who fail to impress the spectators in a theatre, and therefore fail to be convincing, no matter how much they influence the puppets in a play, would do well to study Claude Merelle. What a performance she gives! No ogling, no exaggerated twisting and turning of the body, no stagy grins and labeling smirks of invitation, but impressive dignity, nicely assumed sincerity, graciousness, beauty, and an adroit use of tricks that never give themselves away—such is the smooth and subtle Milady de Winter of Claude Mérelle.” Unfortunately, the American shortened version suffered from incoherence and too many intertitles. It was not very successful in contrast to the original, French version. 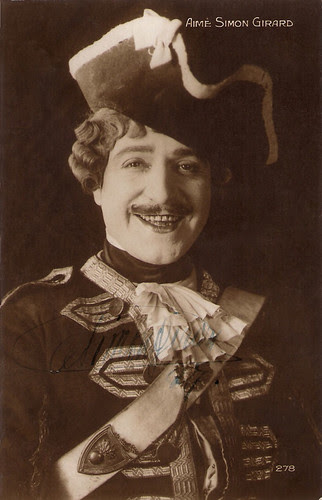 Whisky Queen
Exploiting the success of Les trois mousquetaires, Diamant-Berger shot the sequel Vingt ans après/The Four Musketeers (1922, Henri Diamant-Berger), already planned by Dumas, in which Mordaunt, a son of Milady, becomes the enemy of the musketeers. In the meantime Claude Mérelle herself had continued her career elsewhere, as her character had been killed at the end of Les trois mousquetaires. She started to play in various low budget films directed by André Hugon and shot in the Camargue: she was La Zingara in Le roi du Camargue/The King of the Camargue (1922, André Hugon) with Charles de Rochefort, Fräulein in Le diamant noir/The Black Diamond (1922, André Hugon), Irma Borel in the Alphonse Daudet adaptation Le petit chose/The Little Thing (1923, André Hugon), and Roseline in Notre Dame d’amour (1923, André Hugon). In La bouquetières des innocents/The Innocent Flower Girl (1923, Jacques Robert) Mérelle was both flower girl Margot as another bad girl: Leonora Galigai, the plotting wife of Concini, a part that Lise Delamare would later in play in Le Capitan/The Captain (1946, Robert Vernay). In 1923-1924 she finally played twice a good girl: the demimondaine Baccara who defends the weak and fights the evil Rocambole (Maurice Thorèze) in Les premières armes de Rocambole/The first weapons of Rocambole (1923, Charles Maudru) and Les amours de Rocambole (1923, Charles Maudru). She also played the title role in Gaston Ravel’s Jocaste (1924). In the mid-1920's Mérelle performed in three serial films: Le vert galant/The gallant green (1924, René Leprince, 8 episodes), Jean Chouan (1925, Luitz-Morat, 8 episodes), and Mylord l’Arsouille/ (1925, René Leprince, 8 episodes) featuring Aimé Simon-Girard. Her last parts were those of the ‘whiskey queen’ Madeleine in Le Capitaine Rascasse/Captain Rascasse (1926, Henri Desfontaines) with Gabriel Gabrio, the baroness of Saint-Dizier in Le Juif errant/The Wandering Jew (1926, Luitz-Morat, prologue & 5 episodes) with André Marnay, and Dolores Coreto in the German film Der goldene Abgrund/The Golden Abyss (1928, Mario Bonnard), starring Liane Haid and Hans Albers. Claude Mérelle quitted film acting at the end of the silent era. Unknown is what she did after and when and where she died.