Olly Holzmann (1916 - 1995) was an Austrian ice skater, dancer and film actress. With her distinctive temper, her fizzy joy of life and Austrian charm, her dark hair and her ordinary but nice face she was the typical Wiener Mädel in films of the 1930’s and 1940’s. 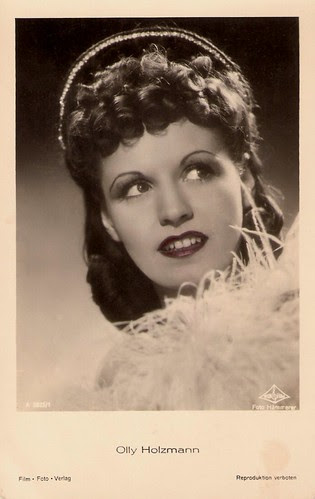 Pursued By Misfortune
Olly Holzmann was born as Olga Holzmann in Vienna, Austria-Hungary, now Austria in 1916 (according to IMDb in 1915). She made her film debut with a small part in the spy film Hotel Sacher (1939, Erich Engel) next to Sybille Schmitz, Willy Birgel, and Wolf Albach-Retty. In her second film Frau im Strom/Woman in the Current (1939, Gerhard Lamprecht) she played the part of the girl of a motor mechanic (Attila Hörbiger), who saves un unknown woman (Hertha Feiler)from the river, and falls in love with her. In the melodrama Mutterliebe/Mother Love (1939, Gustav Ucicky) she portrayed the daughter of a poor widow (Käthe Dorsch), who offers everything to make her spoiled and difficult children into useful citizens. Her first bigger role was a parlour maid in Tipp auf Amalia/Tip On Amalia (1940, Carl Heinz Wolff), who is suddenly connected to three other servants by an unexpected joint inheritance. Her most successful film commercially was the romance Wiener G’schichten/Vienna Tales (1940, Géza von Bolváry), in which she played a supporting role next to Marte Harell, Paul Hörbiger and Hans Moser. In the same year she had her first leading part in the comedy Sieben Jahre Pech/Seven Years Hard Luck (1940, Hubert Marischka). At the side of Hans Moser and Theo Lingen she portrayed a young woman whose admirer (Wolf Albach-Retty) thinks he is pursued by misfortune, and therefore doesn’t dare to make her a proposal. In the crime film Fünftausend Mark Belohnung/5000 Mark Reward (1942, Philipp Lothar Mayring) she played the wife af an amateur detective (Martin Urtel), who overambitiously drives her husband in all kind of troubles. 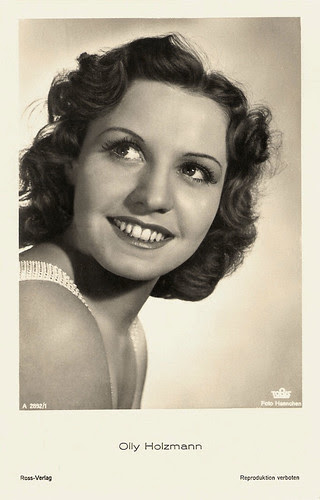 Defectors
With her distinctive temper, her fizzy joy of life and Austrian charm, her dark hair and her ordinary but nice face Olly Holzmann was the typical Wiener Mädel (Vienna Girl), impersonated by many actresses in the 1930’s and 1940’s. Olly is best remembered for her leading role in the lavishly produced ice spectacle Der weiße Traum/The White Dream (1943, Géza von Cziffra). It was the first time that the former ice dancer could show sher skatings skills in a film. Her on-screen-lover was again Wolf Albach-Retty, but her partner in the ice scenes was world champion Karl Schäfer. Athough her last three films were shot before the end of the war, they were only first shown after the war (Those films were nicknamed Überläufer (defectors)). In the romantic comedy Erzieherin gesucht/Governess Wanted (1945-1950, Ulrich Erfurth) she played a mannequin, who fills in for a friend as a governess for a five year old boy, and turns properly the heads of the kid’s three uncles (Ernst von Klipstein, Wolfgang Lukschy und Fritz Wagner). In the musical comedy Liebe nach Noten/Love After Notes (1945-1947, Géza von Cziffra) she learns a composer ladykiller (Rudolf Prack) that women can compose too. Her last film was the romantic comedy Mit meinen Augen/With My Eyes (1945-1948, Hans H. Zerlett) with Olga Tschechowa and Willy Birgel, in which she played a secondary part. Olly Holzmann was married twice. During the war she was married shortly to a cameraman. Her second husband was the American officer Alexander Orley, a racecar driver and export merchant, who she had met in 1945 in bombed Berlin. With her husband, her daughter and his son she went to live on a Caribbean island. After her husband’s death in 1975 she returned to her hometown, Vienna. Olly Holzmann died in 1995, in London, Great Britain. 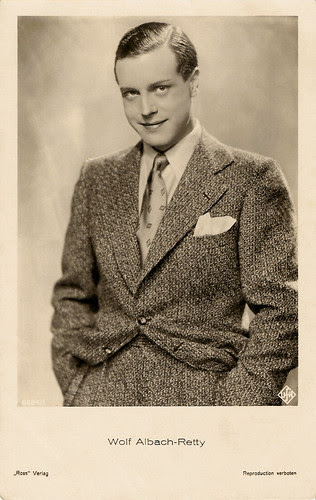