Ralf Wolter (1926) was the ´King of the Supporting Parts´ in countless German comedies, musicals and Euro-Westerns. Unforgettable is his performance as Sam Hawkens, the loyal companion of Winnetou and Old Shatterhand in the classic Karl May Westerns of the 1960’s. 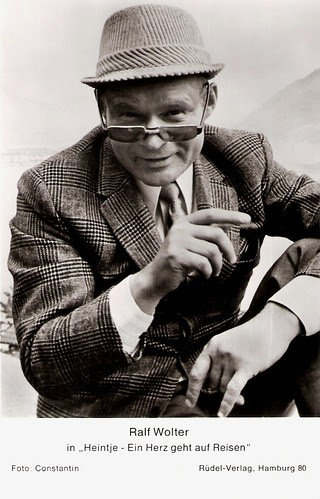 Goofy Butler
Ralf Wolter was born in 1926 in Berlin as the son of a comedian, acrobat and singer. He studied acting at Der Kreis (Fritz-Kirchhoff-Schule) in his hometown, where he also started his career in several Berlin theatres such as the cabaret Schall und Rauch. Between 1954 and 1958 he was a member of the cabaret Rauchfang. He made his first film appearance in 1951 in the satirical comedy Die Frauen des Herrn S./The Women of Mr. S. (1951, Paul Martin) with Sonja Ziemann and Paul Hörbiger. Soon he got more film offers to show his comical talent in countless comedies and musicals. With his inimitable style he became a darling of the public as the goofy butler, odd fellow or likable bandit, such as in Das Wirtshaus im Spessart/The Spessart Inn (1958, Kurt Hoffmann) with Liselotte Pulver. He appeared in the complete range of funny and indispensable supporting parts, including the policeman, the jockey or the civil servant in light entertainment films like Die Beine von Dolores/The Legs of Dolores (1957, Géza von Cziffra), Wenn die Conny mit dem Peter/When Conny and Peter Do It Together (1958, Fritz Umgelter), and Freddy, die Gitarre und das Meer/Freddy, the Guitar and the Sea (1959, Wolfgang Schleif). His funniest part was a bathroom waiter in Wir Wunderkinder/Aren't We Wonderful? (1958, Kurt Hoffmann) starring Hansjörg Felmy. In 1961 he appeared as a bald soviet agent in the Hollywood comedy One, Two, Three (1961, Billy Wilder) starring James Cagney and Horst Buchholz.

German postcard, no. E 22. Photo: Constantin. Still from Winnetou I (1963, Harald Reinl). Caption: "The conquering Apaches decide in the powwow to kill the white prisoners. The cranky Sam Hawkens just can't understand, why this is the way he has to go to the happy hunting ground." 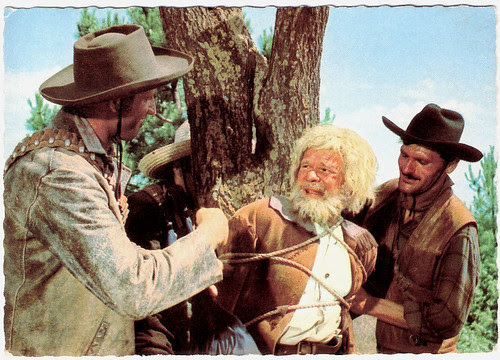 Trapper Sam Hawkens
Unforgettable is his role as trapper Sam Hawkens, the loyal and sympathetic companion of the heroes in the Karl May films of the 1960’s. The first time Ralf Wolter appeared as this tattered type was in Der Schatz im Silbersee/Treasure of Silver Lake (1962, Harald Reinl). It would be his breakthrough. Soon followed Winnetou I/Apache Gold (1963, Harald Reinl), Old Shatterhand/Shatterhand (1963, Hugo Fregonese), Winnetou - 3. Teil/The Desperado Trail (1965, Harald Reinl), Winnetou und das Halbblut Apanatschi/Half-Breed (1966, Harald Philipp), and Winnetou und Shatterhand im Tal der Toten/Winnetou and Shatterhand in the Valley of Death (1968, Harald Reinl). When producer Artur Brauner needed a Hadschi Halef Omar for his film Der Schut/The Shoot (1964, Robert Siodmak), it was out of the question who should play the always yapping, a bit simple companion of Kara Ben Nemsi (Lex Barker). Wolter continued to yap– and unnerve his master - in the sequels Durchs wilde Kurdistan/Wild Kurdistan (1965, Franz Josef Gottlieb) and Im Reich des silbernen Löwen/Attack of the Kurds (1965, Franz Josef Gottlieb). In the in Mexico situated two-parter Der Schatz der Azteken/The Treasure of the Aztecs (1965, Robert Siodmak) and Die Pyramide des Sonnengottes/Pyramid of the Sun God (1965, Robert Siodmak) he played the cuckoo clock seller Andreas Hasenpfeffer next to Lex Barker. In 1966 he appeared again with Barker in the western Wer kennt Jonny R.?/Who Killed Johnny R.? (1966, José Luis Madrid). He continued appearing in films during the 1970’s, but without the success that he was used to with his Karl May films. His parts in the family films with the Dutch child star Heintje Simons (including Heintje - Ein Herz geht auf Reisen/Heintje: A Heart Goes on a Journey (1969, Werner Jacobs)), the soft-sex Urlaubsreport films (including Urlaubsreport - Worüber Reiseleiter nicht sprechen dürfen/Holidays Report (1971, Ernst Hofbauer) starring Sybil Danning) and five vehicles for Schlager singer Roy Black (including Kinderarzt Dr. Fröhlich/Children’s Doctor Fröhlich (1972, Kurt Nachmann)) were banal and sometimes even too painful to watch. An exception was his leading role in the excellent comedy Was ist denn bloss mit Willi los?/What Is the Matter with Willi? (1970, Werner Jacobs), in which he and Heinz Erhardt played two tax collectors. But more and more the thoroughbred comedian moved over to television. He appeared in TV series like Ein Fall für Titus Bunge/A Case for Titus Bunge (1967), and the Krimis Tatort (1975) and Der Alte/The Old Fox (1977-1978). He returned as Sam Hawkens in the 14-part TV series Winnetou le mescalero/My Friend Winnetou (1980, Marcel Camus). In 1991 he appeared for the last time as Sam Hawkens together with Pierre Brice at the Karl-May-Festspiele in Bad Segeberg. Ralf Wolter made his last film appearance as Professor Boris Smirnoff in Kondom des Grauens/Killer Condom (1996, Martin Walz), based on the comic of Ralf König. In 2003 the then 75-year old actor caused a serious car accident, which killed three people, for which he had to go on probation for ten months. Nowadays Wolter mainly works in the theatre. In 2008 he appeared as the old Harry Frommermann (the founder of the singing group Comedian Harmonists) in the play Jetzt oder nie – Die Comedian Harmonists/Now or Never – The Comedian Harmnonists. Recently, he appeared in two films again. In 2009 he was one of the title figures in the crime comedy Dinosaurier/Dinosaurs (2009, Leander Haußmann) with Eva Maria Hagen and Walter Giller, and in the comedy Bis zum Horizont, dann links!/To the horizon, then left!(2012, Bernd Böhlich) with Robert Stadlober. While I write this, the latter is still in post-production. 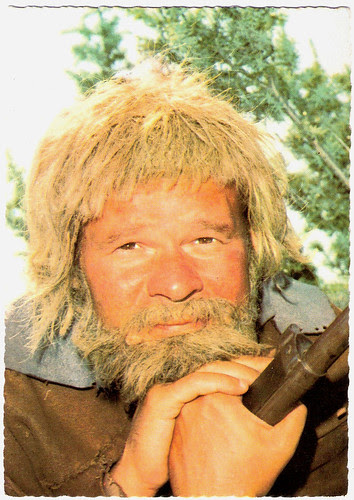