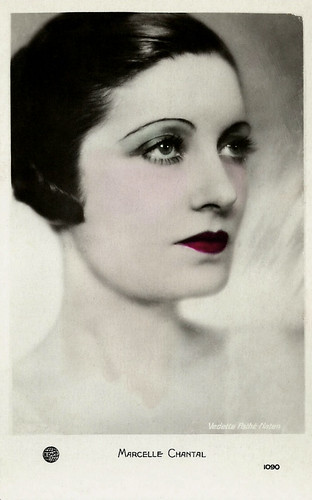 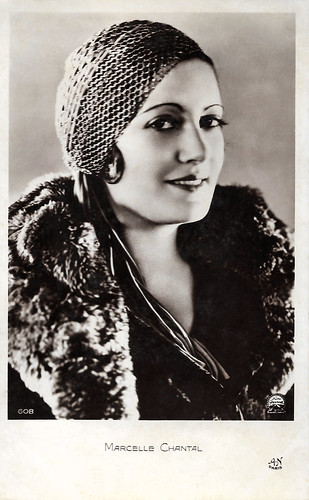 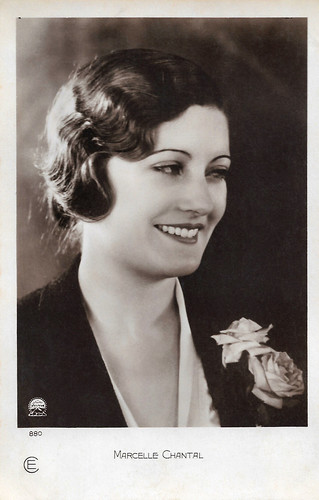 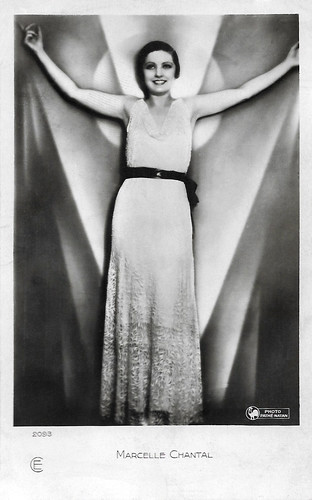 She came from a rich family of bankers and endured a severe education which included the arts. She discovered she liked singing and dancing, but her mother considered this unproper. Director Marcel L’Herbier, a friend of the family, wanted her to debut in film and let her make a screen-test, but her mother forbade it.

After she married a rich and handsome American in 1921, David Jefferson-Cohn, her husband let her enjoy public life in Paris as pastime, in particular the arts. And so, already when they were still betrothed, Marcelle debuted in cinema in L’Herbier’s film Le Carnaval des vérités (Marcel L’Herbier, 1921).

After she had been applauded as a singer on charity galas, she took singing more serious, first at the Opéra Comique in La Vie de bohème, then at the Opéra Garnier in Thaïs, under the name of Marcelle Jefferson Cohn. When she didn’t accept authority anymore, her husband hired her the Théâtre des Champs Elysées, so that she could do as she pleased.

She took things serious, collaborating with a.o. Firmin Gémier and introducing the beautiful dancer Anna Pavlova, but eventually her work as manager and singer took his toll, so for months she was ill. When she recovered she realised she would never become prima donna, and set her mind on another profession, though it took some years. 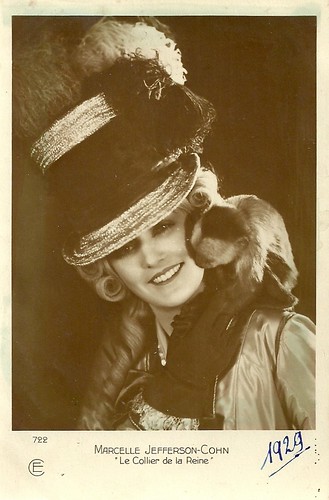 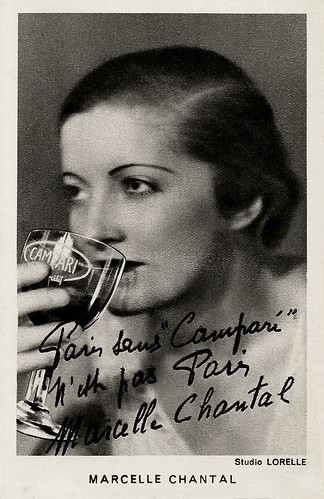 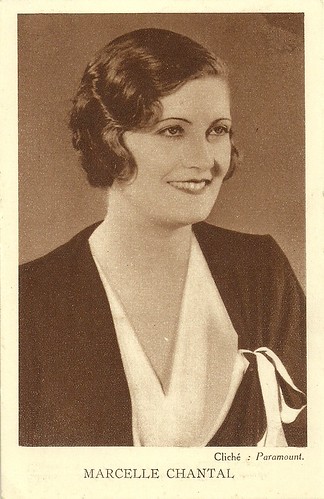 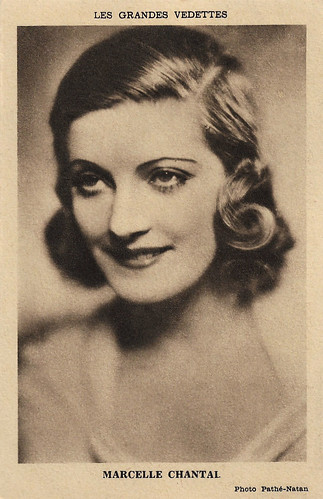 When Marcelle’s husband, however, made her understand that a hobby was alright but not a career, she made him understand their marriage was over. She was set on a film acting career.

Until the outbreak of the Second World War, she would act in various French sound films, under the name of Marcelle Chantal, expressing humour and elegance. In two years’ time she had already performed in eight films.

Chantal would act opposite many male stars of those years, such as Pierre Richard Wilm, Fernand Gravey, Jules Berry and Jean-Pierre Aumont. 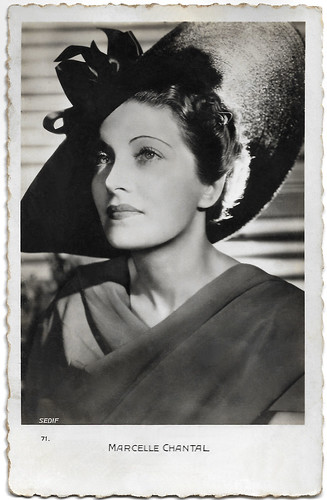 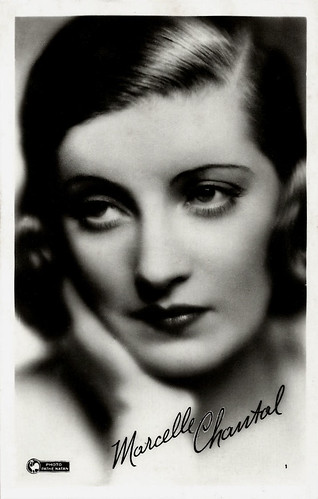 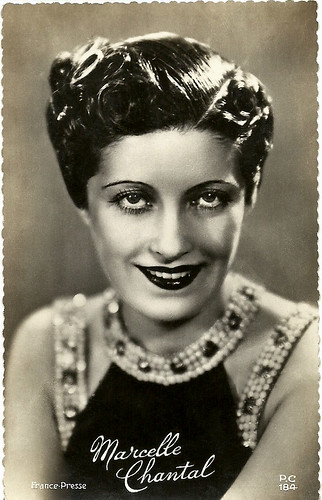 A Comeback against all odds

She went to London to star in A Romance in Flanders (Maurice Elvey, 1936), and subsequently acted in L’ile des veuves/The Island of Widows (Claude Heymann, 1937) with Pierre Renoir.

In 1938 she starred as Tsarine Alexandra opposite Harry Baur as Rasputin in L’Herbier’s prestigious production La tragédie impériale/Rasputin. After this she starred with Pierre Renoir in the courtcase drama L’affaire Lafargue/The Lafargue Case (Pierre Chenal, 1938).

Chantal’s last role before the war was in Jeunes filles en détresse/Girls in distress (Georg Wilhelm Pabst, 1939). The plot evolved around parents (Chantal and André Luguet) who are too busy working to take care of their daughter Jacqueline (Micheline Presle), so they send her to a boarding school, where all the girls prove to be children of divorced parents. When one girl attempts suicide and when Jacqueline’s parents decide to divorce as well, the girls are in crisis.

Outraged about the outbreak of the Second World War, Marcelle Chantal fled to Switzerland, where she toured the country with a theatre show, and even dared to perform on the Côte d’Azur while the demarcation line was still running.

When peace returned, Marcelle Chantal rediscovered Paris had changed: the prewar divine creatures had become outdated, so her type and good manners were no assets anymore. She tried a comeback against all odds, starring in Fantomas contre Fantomas (Robert Vernay, 1948-1949) with Aimé Clariond as Bréval and Alexandre Rignault as Juve.

Fittingly Chantal closed her film career with the part of the ageing courtesan Léa de Lonval opposite Jean Dessailly in the title role in another Colette adaptation: Chéri (Pierre Billon, 1950). Just like Léa heartbroken accepts that Chéri abandons her on instigation of his mother (Jane Marken), and marries a girl of his own age he doesn’t love, Chantal understood the times had changed.

Marcelle Chantal left her beloved Paris and retired to an estate in the Pyla/Pilat, near the basin of Arcachon. She refused all subsequent proposals to return to the screen. Cancer was slowly disfiguring her beauty, so in her rare public appearances she was heavily veiled.

The illness took Marcelle Chantal away shortly after her 59th birthday in 1960. 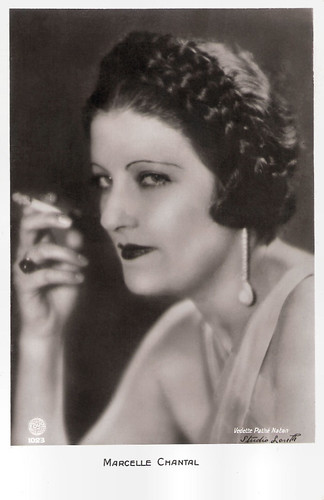 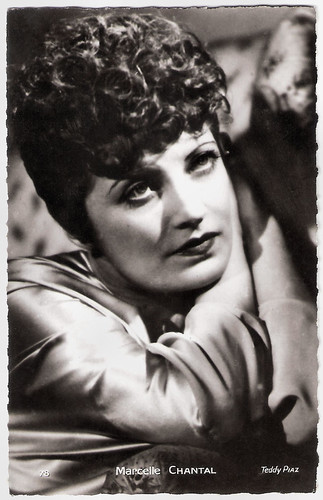 
Scene from L’ordonnance/The Orderly (1933) with Marcelle Chantal at the piano. Source: Camille885 (YouTube).