On 4 September 2020, Belgian actress and singer Annie Cordy (1928) passed away. The energetic and zany performer starred in more than 30 French film operettas, comedies, and dramas. Cordy made over 300 records, and did 4000 live appearances worldwide, including several memorable concerts at Paris’ most famous venue, L’Olympia. She was 92. 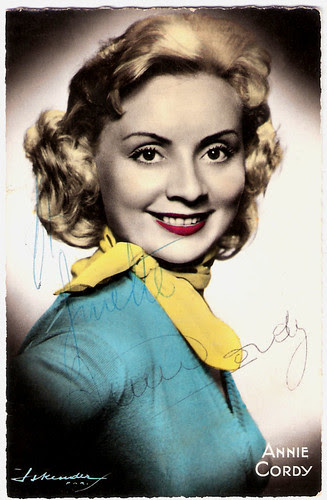 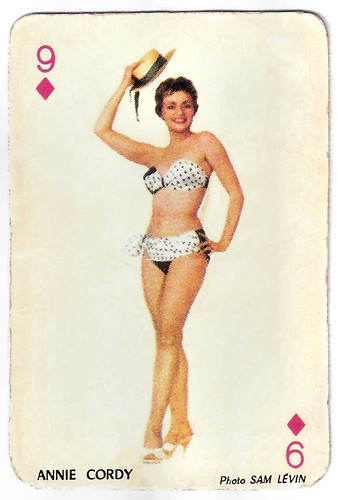 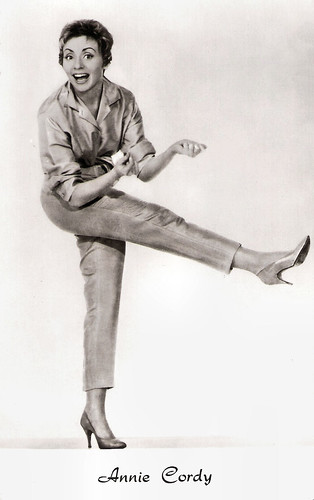 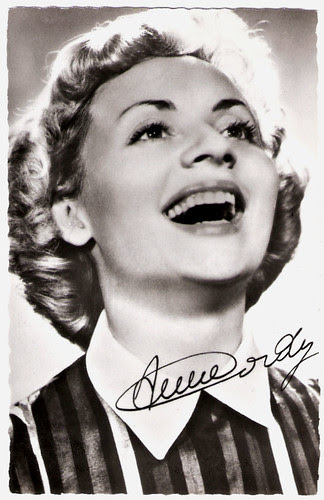 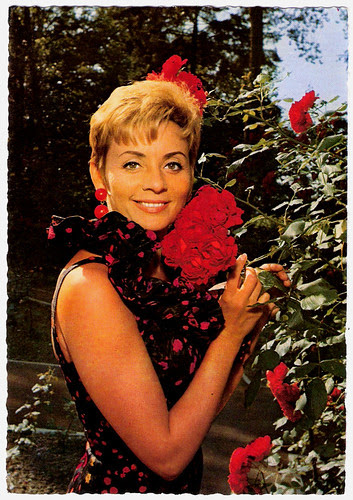 The Lido and the Moulin Rouge

Annie Cordy was born as Léonie Cooreman in Laeken (according to IMDb: Schaerbeek, Brussels), Belgium in 1928. Her parents were Jan Cornelius Cooreman and Maria de Leeuw. She had a brother, Louis, and a sister, Jeanne.
At 8, her mother enrolled her in a dance class. She studied piano and music theory. While studying, she performed at charity galas. Between her dance numbers, she sang popular hits.
At 16, she won the talent contest Grand Prix de la Chanson in 1944. She made her official stage debut in Brussels at the Bœuf sur le toit and performed throughout Belgium.
In 1950, the artistic director of the Paris’ biggest cabaret, Lido, invited her to come to Paris. In 1951, she met Francois-Henri ‘Bruno’ Bruneau, who became her manager, and in 1958 her husband too. In 1951 and 1952, Cordy starred in big revues at the Lido, but also at the ABC and the Moulin Rouge cabarets.
In 1952, she accompanied the Tour de France cycle race, an event which had huge mass appeal and which, at the time, attracted as many show business personalities as sportsmen. As RFI notes: “The event brought popular acclaim for the young singer who received the Maurice Chevalier award at Deauville. She was already admired for her versatile talents as a singer, revue artist, and above all zany comedienne.”
In 1952, Annie Cordy made her stage debut in the operetta 'La Route fleurie' (The Flowered Road) by Francis Lopez and Raymond Vinci, with Georges Guétary and Bourvil. The show was an enormous hit and ran at the AC Theatre in Paris for three years.
In 1954 she performed for the first time at Paris's most famous venue, L’ Olympia. Many memorable concerts would follow. A year later she also received the Grand Prix de l' Académie Charles-Cros for the song 'Oh, Bessie!', a melancholy tribute to jazz singer Bessie Smith.
Cordy started to record songs for Pathé-Marconi and her version of 'La Ballade de Davy Crockett' was number 1 in the French charts for five weeks in August 1956. Other hits were 'La petite Marie' (Little Mary), 'Les trois bandits de Napoli' (The three bandits of Naples), and 'Léon' (Leo).
In 1957, she sang at the wedding of Grace Kelly and Prince Rainier III of Monaco. It led to an American contract and she went on a world tour and performed at the Plaza in New York, La Copacabana in Rio de Janeiro, in Cuba, Mexico, Puerto Rico, etc. Back in France, she played with Jean Richard in the operetta 'Tête de linotte', which ran until 1960. 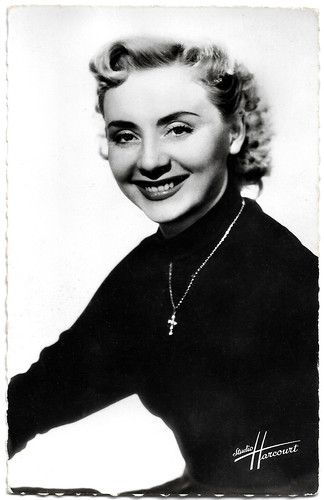 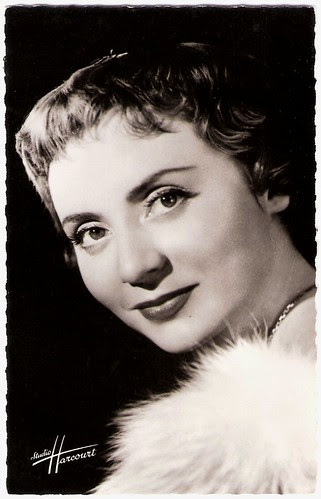 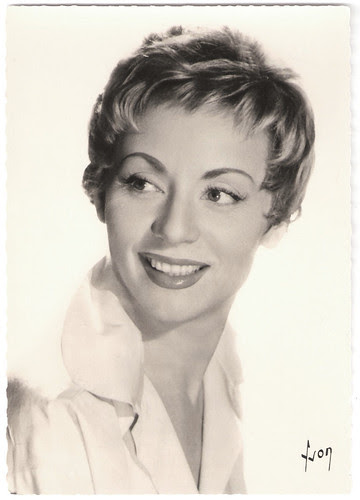 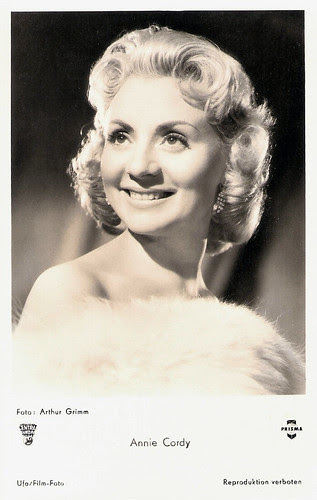 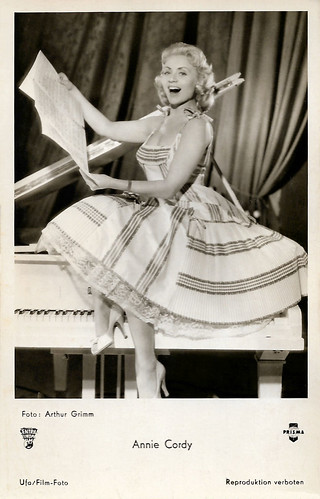 In the cinema, Annie Cordy made her first appearance in the star-studded cast of the super-production Si Versailles m'était conté/Affairs in Versailles (Sacha Guitry, 1953). Then she played opposite Bourvil and Louis de Funès in the comedy Poisson d'avril/April Fools (Gilles Grangier, 1954), and the musical comedy Bonjour sourire/Hello smile (Claude Sautet, 1955) with Henri Salvador.
A huge success was the film operetta Chanteur de Mexico/The Mexican Singer (Richard Pottier, 1956) with the ‘prince of operetta’ Luis Mariano and Bourvil. It was followed by a string of light entertainment films, including Tabarin (Richard Pottier, 1957) with Michel Piccoli, Cigarettes, Whisky et P'tites pépées/Cigarettes, Whiskey and Wild Women (Maurice Régamey, 1958), and Tête folle/Madcap (Robert Vernay, 1959).
During the 1950s, 1960s, and 1970s, she appeared in some 30 French films, musical comedies but also dramas. In 1969, she was a revelation as a dramatic actress in the thriller Le passager de la pluie/Rider on the Rain (Rene Clement, 1970) in which she played the role of the mother of Marlène Jobert.
She confirmed her dramatic talent with fine roles in Le Chat/The Cat (Pierre Granier-Deferre, 1971) with Jean Gabin and Simone Signoret, the drama Rue Haute/High Street (André Ernotte, 1976), and the Belgian drama Un été après l'autre/One summer after another (Anne-Marie Etienne, 1989).
Sandra Brennan writes at AllMovie: “In films, she usually plays feisty women who live life to the fullest. She also has demonstrated considerable talent as a dramatic actress as can be seen in the 1994 film La vengeance d'une blonde/Revenge of a Blonde.”
She also played a dramatic role in the hugely successful television series, Orage d'été/Summer storms (Jean Sagols, 1989). In the 1990s her appearances were mostly on television, and she recorded and toured less. In 1992, the album 'Oh là là, quelle soirée!' was released, a mixture of new recordings of old hits and new material.
In 1998 she celebrated her 70th birthday and published her autobiography. She also released a compilation of her greatest hits which included a new version of 'Hello Dolly' and celebrated this with concerts at L'Olympia.
In 2006, she played the role of a strong grandmother Le Dernier des fous/The Last of the crazy people (Laurent Achard, 2006). Three years later Alain Resnais directed her in Les herbes folles/Wild Grass (2009) with Sabine Azéma.
King Albert II of Belgium bestowed upon her the title of Baroness in recognition for her life's achievements. Cordy continued to tour with her solo act throughout Europe. Her motto was ‘La passion fait la force’ (Passion is strength). Annie Cordy passed away in 2020 in her home in Vallauris on France at the age of 92. 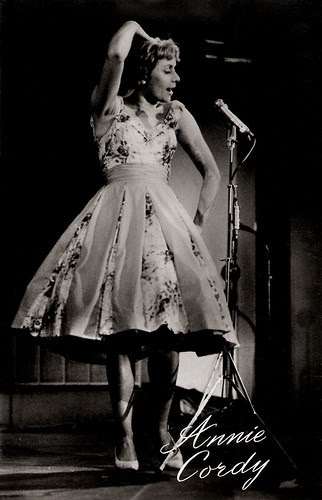 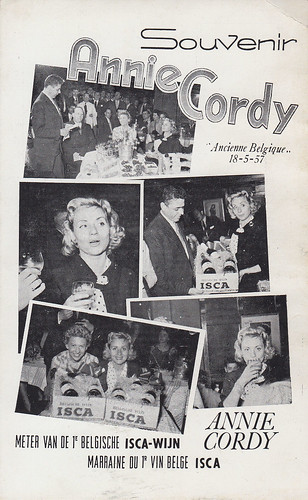 Belgian promotion card for Isca Wijn, 1957. With photos of a performance at the Ancienne Belgique music hall. Collection: Marlene Pilaete. 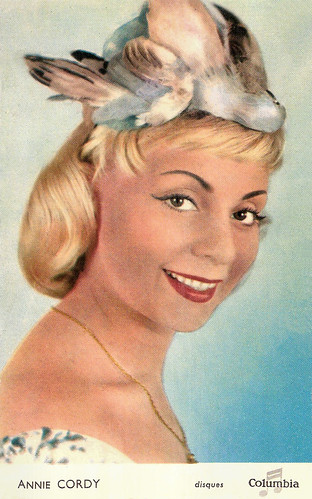 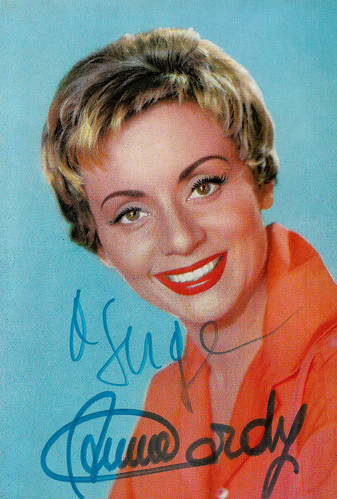 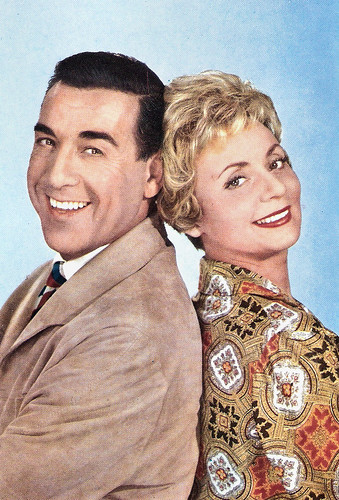 French promotion card by S.I.A.T., Paris for Pathé. On the backside the text of the song Visa pour l'amour. Luis Mariano and Annie Cordy. 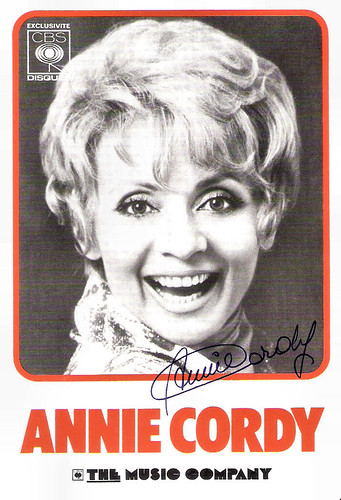 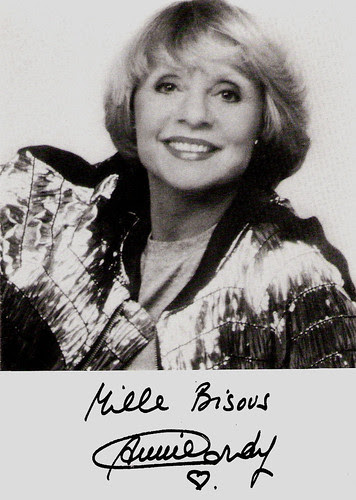 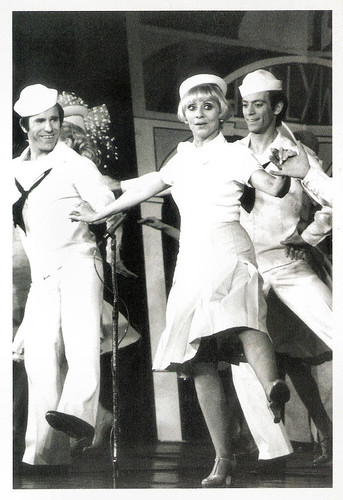 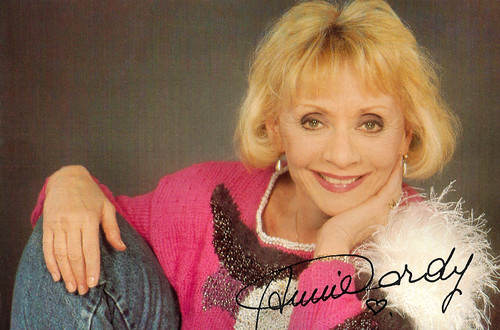